Ferns: got a thing going on 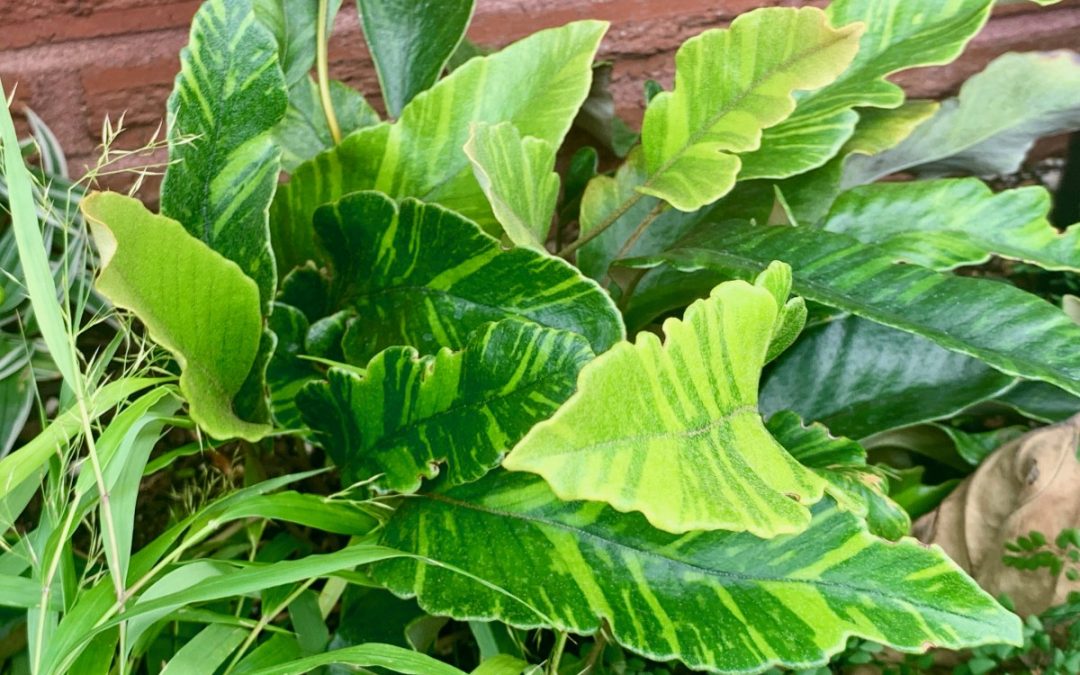 Is it me, or we all falling back in love with ferns. Maybe I’m late to the party. But so many groovy fronds out there. We some 424 ferns on plantlust, and it’s hard to pick a favorite. I like them all. Who is with me? Our Sebright Nursery Inventory is freshly updated with lots of new fern options–and loads of luscious hostas too.

I’ve been strolling around my own garden taking stock, but it’ll be a few weeks before some of the deciduous ferns re-appear. Happy to report, I’ve quite a few evergreen lovelies.

Not sure about the fern in front, but it might be this one. I’m open to persuasion.

I record most of my plant purchases on a spreadsheet, and also take photos of plant and tag. It helps me narrow the possibilities when trying to identify a plant. I realized a little late, closeups that show only surrounding soil–and not which bed they’re in–aren’t all that helpful

I have not treated this Dryopteris sieboldii with adequate love and affection, but it’s hanging out in a pot patiently waiting to be replanted. I pulled it out to disentangle from a rambunctious Persicaria. You know those roots are still lurking underground. I do love Persicaria, but it can be so pushy.

I espied this fern while on a Catio Tour a couple years ago. I think it’s Polystichum setiferum Plumosomultilobum Group. So perfect. Haven’t stopping thinking about it. Corrections welcome.

What’s a Catio, you say. 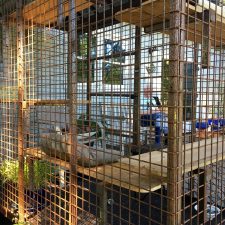 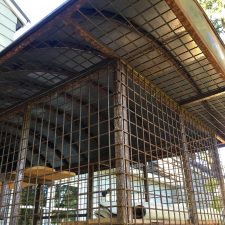 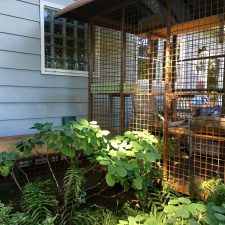 Entrance from the house.

So back to ferns. I’ve started a new bed for my growing obsession–just when I thought I was out of shady spaces. It’s a tight spot between the neighbors’ house and ours.

Previously, the bed was filled with Campanula takesimana. This will be its first season as a fern bed. I’m excited to see how it fares. The tree is Magnolia macrophylla var. ashei. (Although Roger Gossler told me he doesn’t think the accepted name is accurate because of how early it blooms on a young tree. I know, it’d be helpful if I could tell you what he actually said, but I can’t remember that part.)

And as long as we’re on an aside, I considered taking out this Ashe Magnolia because it didn’t seem healthy. Nothing like threatening a plant to kick it into peak performance. Tons of new growth this year. And those flowers, ooooooh. So good. 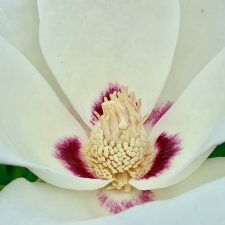 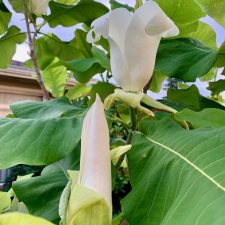 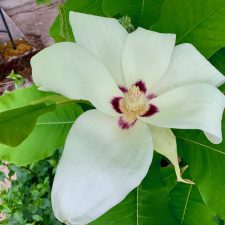 Megan and I both grow the Campanula for the groundcover aspect. I got my starts from Megan. It makes for a carpet of glossy green leaves. Eventually bell-shaped flowers rise higher and higher. I always intend to remove the blooms to maintain the groundcover appeal–and then wrestle with myself over whether I really should. Last year I put a huge arm load in the recycling bin. I almost cried.

I advertised flowers free for the taking, but no taker came forward until too late. I think you can agree, this not the right plant to maximize the appeal of this little tree.

I need to remember stick my nose in those flowers this year. I’ve been reading the Scentual Garden by Ken Druse, and it’s downright appalling how many scents I’ve missed. It’s a good read: give it a sniff.

Above is the new plant right after I brought it home from Cistus Nursery. It reminds me how likely you are to find big glorious plants there. Look at those leaves, on this baby tree. (I predict a Garden Blogger Rumble at Cistus Nursery soon.)

I was tempted by big healthy Catalina Ironwood at Cistus last fall. Now wondering why I talked myself out of it. Other than it’d be another tree. In my defense for including here, it looks fernish. 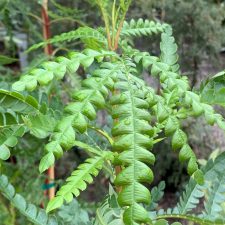 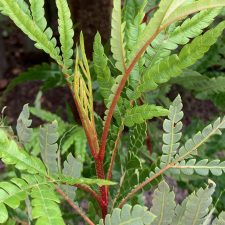 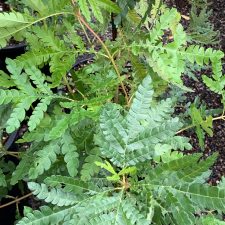 We are so rich in fabulous nurseries in the Pacific Northwest. If you’re not lucky enough to swing by and drop in, don’t despair. Many nurseries, including Cistus, will ship plants right to your front door.

Clearly, I’ve lost my way on this post. And here I thought I had nothing to say. Ferns–stay on target, Patricia.

Mexican Polypody Fern above. Pat Thompson at Secret Growers tells me they grow straight up from the ground. Imagine, a whole battalion of these critters standing at attention. Can’t wait.

I’m so hoping my Pteris cretica var. albolineata will perform like these at Sebright Nursery–where I bought mine. Truth be told, I’ve killed one already. But that’s because I was dawdling over where to plant. My new policy, just plant it. Chances are I’m going to move it two or three times before I’m happy anyway.

I have a couple Royal Ferns in the garden. I think I saw one in the Sebright gardens planted with their Gunnera. Hmmm. Maybe I’ll put one in my stock tank alongside my Gunnera. And add some Acorus too; there’s lots of that in the garden dying to be moved.

Wait a minute. I found photo of the Gunnera and Fern combo. But now I’m doubting whether it’s Onoclea sensibilis aka Sensitive Fern. (Thanks Loree Bohl.) I remember asking Kirk Hansen about it, but can’t pull up his answer. You see a pattern here? Honestly, how can you blame me in the midst of so much stimuli?

At any rate, here’s a picture of its jungly goodness.

And while we’re at it, a fabulous Hosta at Sebright. If you’re ever near Salem, Oregon, take the opportunity to visit their awe inspiring gardens. I’m not kidding.

And if Hostas are your jam, Sebright has it covered with some 900 to choose from.

Wishing you all good luck in finding new heartthrobs, and the ability to keep track of their names.

One final tip, if you see a plant you like, snap it up. I passed on this Zone 9 Microsorum pustulatum. And when I came to my senses and rushed back to fetch it, it was gone. So keep in mind, if you’re in the presence of other lusty gardeners, that snap-it-up advice goes double.