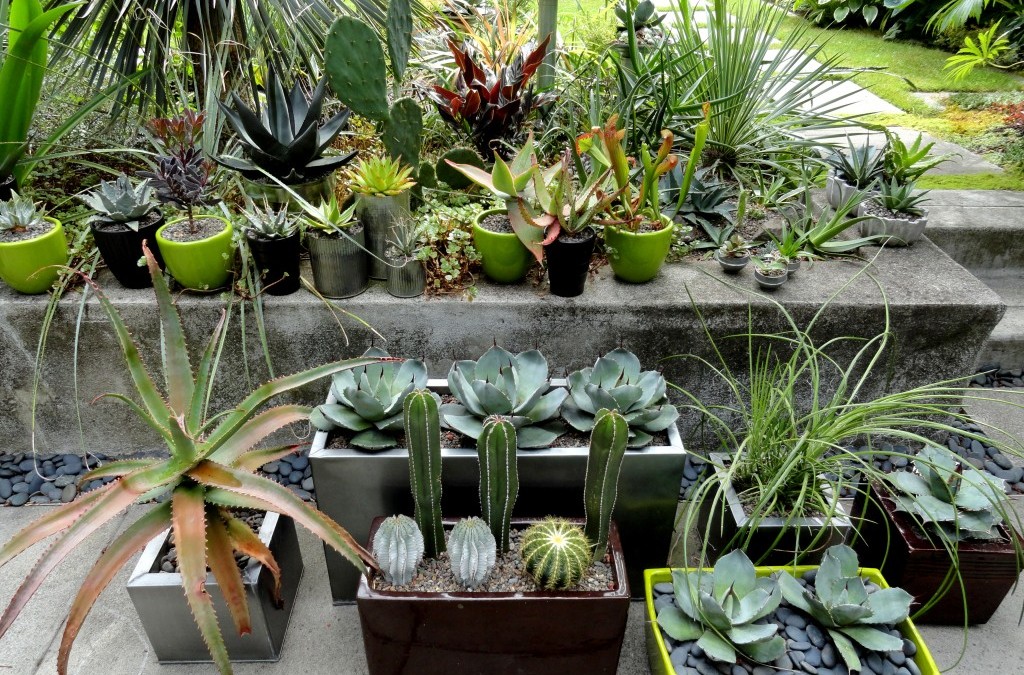 It started with an innocent comment on Facebook. I mentioned I’m running out of space in my garden, and with no big projects this year I wasn’t sure where all the plants I’ll have to buy this season were going to go. Grace encouraged me to think about planting in containers as a way of squeezing in a few more. What!? Obviously she hasn’t visited my garden, otherwise she would never encourage the madness, and I told her so. She responded saying “I bet you don’t have more than I do”…

First I should tell you a little bit about Grace. She’s a fellow Oregonian who lives south, in Albany, and blogs at Gardening with Grace. Grace is also part of the plant lust team, she joined up with us last fall and works behind the scenes as a research consultant helping to flesh out the plant lust listings. She is also the author of Grace in the Garden: Thirty Years of Blunders and Bliss.

Grace and my gardening styles are very different (for example she loves pink and thinks orange rather unpleasant) but like all plant nuts we speak a common language. In fact there seem to be quite a few of us who have a container obsession. Last August I posted pictures of Eric’s amazing garden in SE Portland which is almost entirely planted in containers.

His total container count = 158, most of which are planted with things not hardy here in the winter, or things that need to stay dry. He moves them all into a greenhouse he built out of a former garage. That’s dedication.

My friend JJ is also a contender for the gardener with the most containers, or so I thought. After all her garden is loaded with colorful and industrial containers of every shape and size.

However upon visiting my garden she announced “you win!”…and declared that I had more containers than she did.

So, if you’re keeping score that leaves Grace and I left to battle it out. She took an official count, which I’ll let her tell you about:

“Having never actually undertaken a full container count for fear it would confirm my gardening neurosis, I flippantly estimated there’d be a mere fifty or so pots situated throughout the garden, a respectable amount considering a bunch of them got emptied and stacked after the first frost. However as soon as I counted twenty in my courtyard alone, I knew I was in trouble. The total was going to be a lot higher and I was going to be exposed for the hort-hoarder that I am. But I was curious too. And if the count was exorbitant, I could cushion it with sound reasoning. After all, I like using containers for growing smaller (cheaper) plants. I’ll grow them in a pot for a few years before transferring them into the garden. I’m saving money.”

“I grabbed my pen and a pad, took a deep breath and headed to the garden proper. Wending my way to the opposite end, taking notes and writing down ever larger numbers, the final count came to two-hundred forty-eight. I was both proud and mortified. After all, the count included four hypertufa troughs, eight pots of spring-blooming bulbs, five containers of strawberries, three of blueberry plants. But it didn’t include my three repurposed livestock troughs waiting for veggie seedlings, the two faux window boxes supporting sad looking brown foliage, or the fourteen flats of winter-sown perennials I’m experimenting with.”

“I shared the final tally with my sister who quickly commented, “That’s a lot of watering.” But it’s really not. Okay, it is and I admit that by the middle of August I get a little tired.  But I’ve worked out an efficient system.

I cluster several pots to make watering them effortless. I place drought tolerant plants in full sun. Everything that isn’t drought tolerant and requires normal to moist soil is placed where it receives at least a few hours of afternoon shade. I place a deep saucer under these pots to catch the drainage and provide additional moisture. I can’t wait to get tired of watering again this year.”

And I should also note that most of Grace’s containers aren’t the kind you just stop by your local nursery and pick up, her collection is the result of a serious lust for rust and lots of hunting.

A paltry (by comparison) 228. I’m tempted to tell you about the containers I didn’t count, ones that have been emptied for the season, but I believe that would just be digging myself an even deeper hole, should my husband happen to read this.

There is definitely a design aspect, containers bring color and style to the garden. And as Grace pointed out containers allow to you squeeze in more plants where they might not fit if you were growing them in the ground. Grace also likes the ability containers give her to coddle smaller plants she buys on the cheap, allowing them to grow up to respectable size before setting them loose in the landscape. My primary reason (and I believe JJ and Eric are much the same) is that containers allow me to control the growing conditions for my plants. Dry loving succulents are protected from our winter rain and plants that can’t take our winter cold get moved inside, where it’s warmer.

So what about you? Care to share your philosophy on containers, and your count?