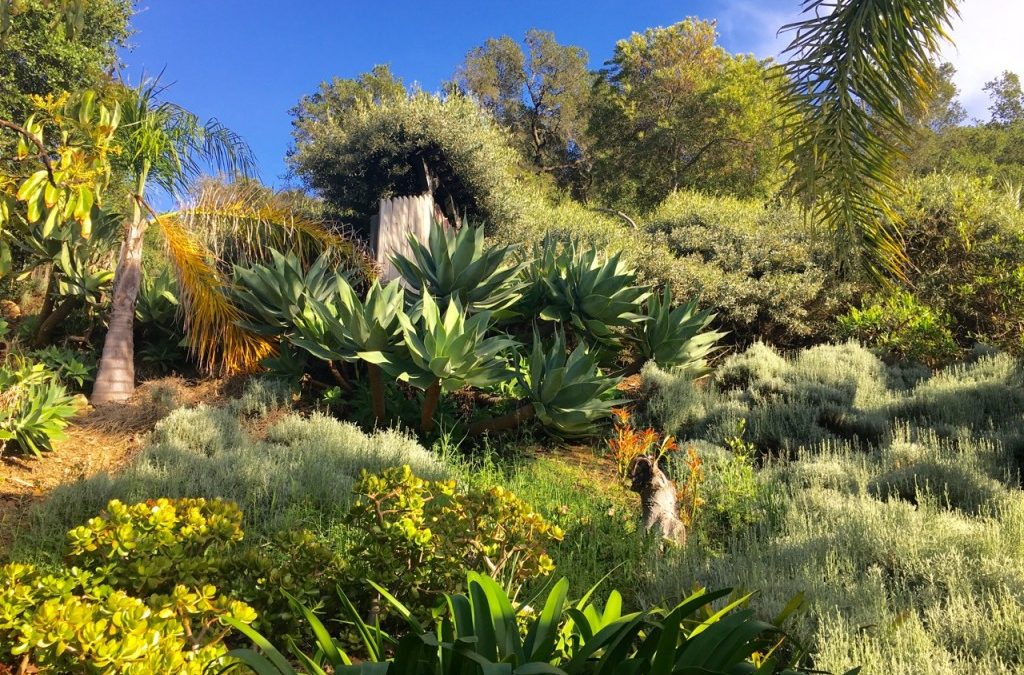 It was a little family trip with my husband Bill, daughter Megan and SIL Justin. Justin had signed up for a 50 mile foot race near Los Angeles, which I can’t explain, but it still seemed a good opportunity to make a long weekend of it. Our son, Elliot, couldn’t come at the last minute, and it’s probably just as well. He wouldn’t have been gaga over the gardens. But Megan and I were crazy happy.

This is what we saw when we pulled up in the parking area.

Right? It wasn’t super easy to find. The winding road leading up to the mission’s perch was reminiscent–I’m told–of Italy.

Not at all what I expected, in an I-couldn’t-believe-how-cool-it-was way.

And there were two mules roadside. We said hello each time we passed, and they looked up expectantly. Sad to say, we didn’t have anything to offer beside our enthusiasm. They were friendly enough, but not terribly impressed with our treat-less hellos. 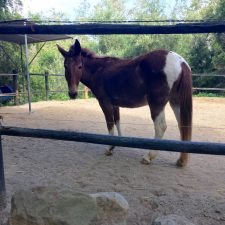 Do you have an apple? 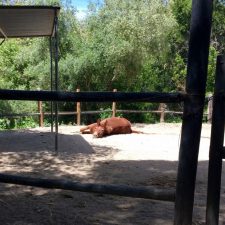 A little sunbath is always nice. 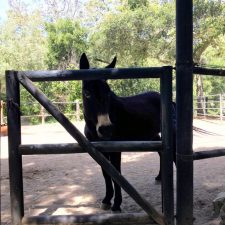 A carrot would be nice.

There was also a wild turkey with a favorite stream side perch just down the hill from these guys. We greeted each him as well, but nary a gobble. I thought I’d taken a photo, but can’t find it. Here’s a reasonable facsimile.

Hold the phone. I just found the actual turkey shot. But since Elliot is already here, I think I’ll let him stand.

Meanwhile, back at the Airbnb, the garden was fabulous–and completely undersold on the rental site. Megan and I did not wait for the captains to turn off fasten-seat-belt signs before we jumped out and commenced swooning.

Plus the view from up there was not terrible. I waved, thinking maybe Oprah was over there somewhere–and that she’d enjoy talking plants with us. It could happen. I wasn’t aware of her living nearby, but the area was so incredible, it seemed possible. Then I looked it up. Sure enough, a nice spread nearby. I’d include a link, but everything I found seems kind of stalkerish. And I’m no stalker. Unless there’s a garden involved that I really need to see.

This is the house we stayed in. I loved the bell tower. I want a bell tower. Of course, I rang it–a few times. The rope was hanging right there. Why else would it be there?

That’s the guest house in the background. I heard that the owners stay there when their main house is rented. They were out of town when we visited, and we never met the other people in residence. Of course, I wanted to. Because I’m a blabbermouth and quite like talking with people. Situational extrovert, only, children! I could be quite happy staying in the guest house, too. No?

I know I’m running around willy nilly to show you the place. But can you blame me. So much good stuff everywhere you looked.

That’s a refrigerator up there alongside the cupboards. Sadly, non-functioning. So cool. There must be someone who knows how to repair it. I know a guy here in Portland, a retired Cardiologist, Don T. He could totally fix it. He repaired the NuTone Trinity 4 – Yellow-Butterscotch doorbell at our Alameda house. It hadn’t worked for 20 years, and when Don found out, he was all over it. 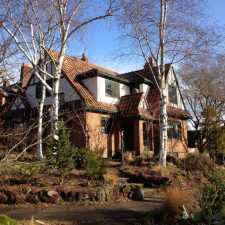 Our house on Alameda in PDX 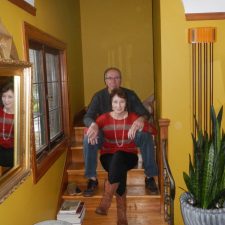 Patricia and Bill alongside the Long Bells. 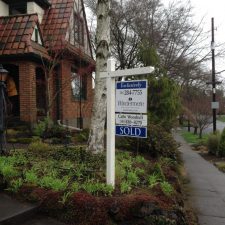 Good while it lasted, some 30+ years.

It took him about a day. They have the most glorious sound,  I told Don, I was happy for him that he’d discovered a transferable skill upon retirement. But I digress.

Back at the Mission, there were a few plants that needed watering, and I meant to tend them. But one morning a guy showed up to water. I went out to chat with him–thinking he was the responsible party for all the splendor. But he informed me that it was the handiwork of the owner himself–that he was just there to water while they were out of town.

But the opposite side of the path seemed okay without.

How do they grow that big in such small pots? They like being root bound? But this was on the the front side of the house. We’ll go back around there in a while.

Meanwhile, back on the hillside, inconspicuous pathways dotted the landscape.

There was a rope swing at the top. I didn’t have the nerve to try it. But, of course, our 50 miler was up for the challenge.

When Justin had survived the swing and headed back down the stairs, Megan could return to her state of rapture.

That was the most formal stairway. I kept losing track of just how many there were. And I was a little nervous. It was not a good place to fall, for the plants–or for the people.

And there was art everywhere. So much fun.

OMG, so much to look out. Visual feasts, inside and out.

My lord, this post is getting long. And I thought I had nothing to say. I’m thinking I’ll break here, and catch you on flip flop. There’s so much more to see.

And though I’m loathe to leave home, even I can see there’s a good reason to do it–every now and then. But let’s not get carried away.