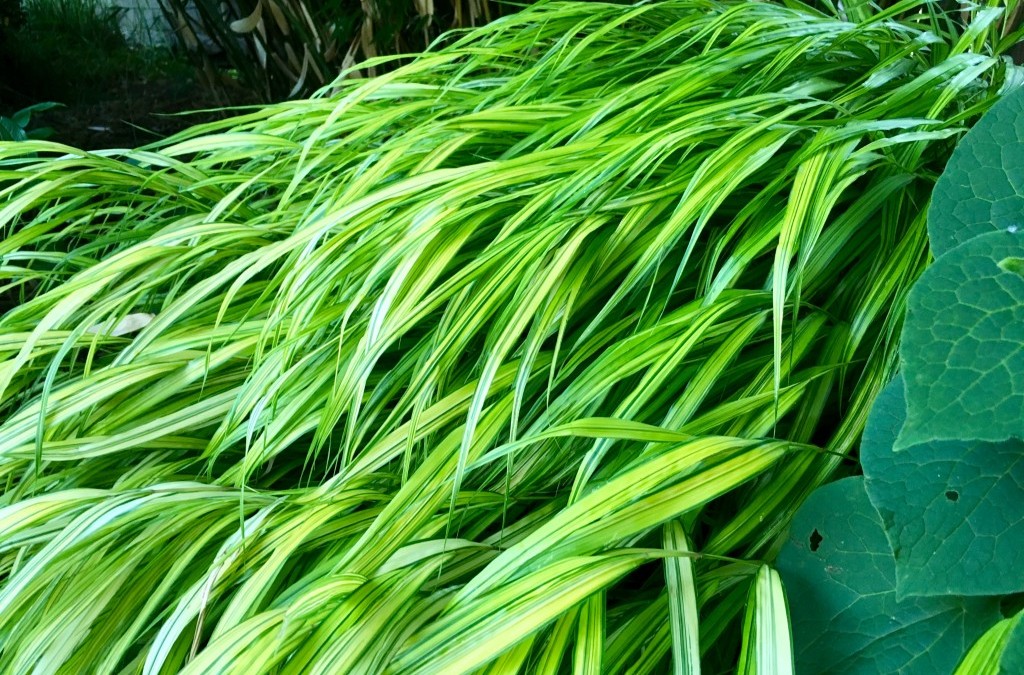 How could I have even considered taking out our apple tree?

This is why you shouldn’t make big decisions after you first move into a place. Ms. Mulch Maid discouraged me mightily, and I’m glad she did. No matter how determined I was at times to get that tree gone, Ms. Mulch’s opinion always held sway.

Without the apple tree, there’d be no shade at all. Not to mention the trunk of the old tree is magnificent. It’s loaded with apples this year, but I’ve been fooled by that trick before. The first year, they all fell off in none-too-tasty of shape.

This may be the year I learn how to care for the apples tree–especially if it’s going to go to all that trouble in producing apples. It’d be great if we could actually eat and share. But enough with the asides. Back to the topic of shade.

And as it turns out, I like shade gardens, which I had aplenty in my Alameda garden.

Bill and I spent countless hours on the patio in our front/side shade garden, often with neighbors. It was our nod to the days of front porch communities. We built it ourselves, with tumbled bluestone. (It turned out terrific. They also were heavy and difficult. In the process, we did all but exchange gunshots. We’re loaded up with 5 pallets of new 2′ pavers for our Flamingo Park garden, and this time, we’re hiring help.)

This garden was west facing. When we moved in, it was completely exposed and so darn hot. This was our only grassy spot, and it was perfect for picnics, kids, and visiting puppies.

Don’t get me wrong, I quite like plants that adore sun. The bananas shown below were a gift from friends Dennis & Kathy–out Cistus Nursery way. The bananas had next-to-no root when I got them, and I thought, that’ll never work. But it did. I planted them at the back of the garden, a beeline from the patio doors. I wish I could say I planned it that way, but it was quite the happy accident.

Still, when it comes to lusciousness, methinks, it’s hard to beat plants that lurk in the shadows. Hakonechloa aka Japanese Forest Grass is probably at the top of my list. I LOVE this plant, and have added a few more to a new bed. Those are getting more morning sun, so we’ll see.

Here are a few more favorites.

This Lysimachia survived a move from my former garden. The first year it was quite torpid, but this years, it’s built up steam. I supposed I’d be remiss in not showing you the before picture–from my Alameda garden. I loved this combination of cramscaped plants. So glad I brought some of these plants with me, because the rest of that original garden is caput.

I wish I could go back and get a clear shot, but there you have it. Three old Laceleaf Japanese Maples provided shade for this bed.

Another shade plant on my favorites’ list, Saruma henryi. This plant was another voyager from Alameda and before that, a start in Megan’s garden. A well-travelled and cooperative plant.

And then there’s a recent heartthrob, Spider’s Web Japanese Aralia. It really lights up a shaded area.

I’ve just added a variegated Jasmine, and have an Asarum splendens in waiting to nestle in at its base. Then, of course, Farfugiums. I think I’ve raved about those a number of times.

How does it know to strew about those little dots? I first noticed this plant in a bed at Portland Nursery on Stark Street. That was before I was a serious gardener, and I couldn’t even imagine growing such a beautiful plant. Turns out I can, and in several places. (Hey, that gives me an idea about another spot that will likely work!)

And this x Fatshedra pleases me. We’ve added one the trellises I wrote about a couple weeks back. More on that later.

My sincere condolences to those who live colder than Zone 8a. Evergreen and takes full shade. Pretty cool, no? 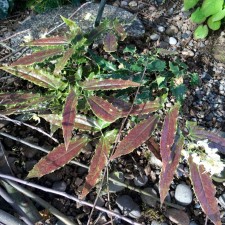 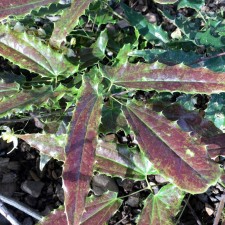 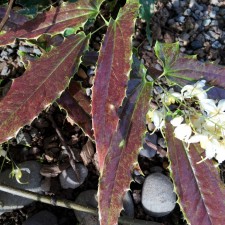 Epimedium wushanense has hundreds of flowers as a bonus.

Epimedium, how I love them. Epimedium wushanense with its elegant spiny leaves is easy to identify, and there so many others. Since I’m enthralled, it wouldn’t hurt to up my identity game. Our contributing nurseries say they grow in zone 5, except for the ones that say zone 6. (Maybe there’s a testimonial out there to fill us in.)

Apparently, I could go on and on. But see what I’m saying, so many fabulous shade plants.

I’ll leave you with this big leaf beauty, Aralia californica. It dies to ground in winter. This is its second season, and it’s putting on height.

By all means, add your favorites in comments. I’m never above–or is that below–borrowing another gardener’s good ideas.