plants on the move + some 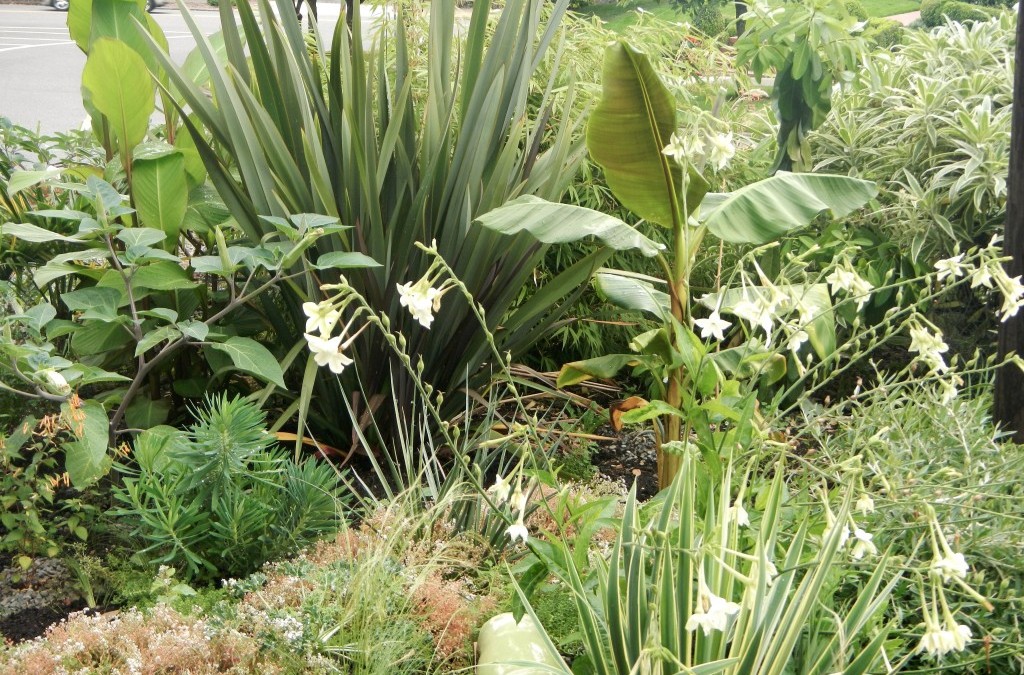 I sometimes hesitate to show before and after photos of my former garden. It’s distressing for us gardeners to see the fruits of our love and labor laid to waste. Recently, though, I’ve been perusing old photos in consideration of my new garden. I was pleasantly reminded of what survived the transplant–and also of what I’d left behind and have since replaced. Honestly, I’m okay. I hope you will be too.

As I’ve said before, probably a million times, we lived in our house on Alameda for 33 +  years. Our fear that we’d regret leaving was fierce. But with skyrocketing property taxes and never ending maintenance on every-surface-requiring-an-expensive-specialty-craftsman, moving was the prudent thing to do.

See that roof. It’s considered a lifetime roof; the clay tiles were imported from Italy in 1928. And you know how long they’ve lasted in Italy. Fabulous if nothing goes wrong. But something always goes wrong–and Italian tile craftsmen are scarce around these rainy parts. Through a series of small miracles, one guy did find us a few spares–and we hid them under our mattress as if they were gold bars. And all those south-facing windows, wood and leaded glass. We replaced all of them with period appropriate windows. $$$$$

So that’s the why-we-moved portion of the program.

You may need to avert your eyes from the next photo–the after shot. You’ve been warned.

Then grass was planted. Okay, I admit. This was a giant GASP moment.

I swear, I support their right to do whatever they choose with their house. I only wished I’d known they planned to bomb the whole dang thing. I was trying not to be greedy when I tagged plants to take. And some were so good, I was just sure they’d want to keep them. Below is the Hellstrip according to my notion of good-looking. And there was room for more plants. I see a patch of dirt.

So, in trying to get plant lists and pictures organized, I looked at these old garden photos. And it occurred to me that I should note what made the move with aplomb and what did not. I thought too, I’d identify plants that I’ve since replicated. Many new discoveries have landed here: it’s an occupational hazard, of the most fantastic variety.

Several of plants easily made the move. The Opuntia, while not technically the exact plant from Alameda, is from the same mother plant as showcased in Loree’s Opuntia Santa post.

I love Sedum takesimense, and it is a super easy plant to move. You can cut them, yank them, accident step on them–and they happily grow anew. One of my favorites.

The Echium ‘Star of Maderia’  are replicated in my new garden. It was happy in its south-facing location on Alameda, near the warm pavement–until it wasn’t. Another shot of it below, before it became a giant. It’s a super plant.

The Daturas have always surprised me, both in the former garden and now. A couple hitched a ride with other transplants. I didn’t know until they came up. The Poncirus trifoliata was a deliberate move, and is doing great. I wonder how big it’ll get? My working theory is I generally kill them before they become a problem. Hmmmm.

I bought my Datura wrigthii as annuals for $3.99 some 5 years ago. I like the aka name, Devil’s Trumpet. They’re a surprise delight, for me and the bees.

Currently, the new Echium candicans (shown above) are sitting out there completely bald. They went in as quart-size, and grew quickly. I hope they make just as speedy a recovery.

Rumor has it that Agave bracteosa, aka Squid Agave, is an easy transplant. True that.

And selfsame in our Flamingo Park garden.

The Acanthus sennii are new from this past summer. I’d have had them in the old garden if I’d known about them.

I love a good jungly look via plant lust and cramscaping.

The Nolina ‘La Siberica’ had nary a complaint about moving. Above, in the before garden. Below, in it’s current digs.

I (We, really. I had lots of help from my gardening pals.) moved several Hesperaloe parviflora aka Red Yuccas. They look a little raggedy in winter, but bounce back when the sun shines again.

My first Hesperaloe parviflora was purchased at Megan‘s and Loree‘s urging. My partners know their plants. Hoping to find the yellow variety this year.

I guess I don’t have to tell you my whole life story in this one post–because I’m on roll. But I’ll leave you with a most unlikely success. I didn’t ever expect this to survive before I moved it. But plantsman extraordinaire, Sean Hogan of Cistus Nursery, promised it would do this and come back bigger and bolder. No kidding.