No shortage of winter interest (Part 1) 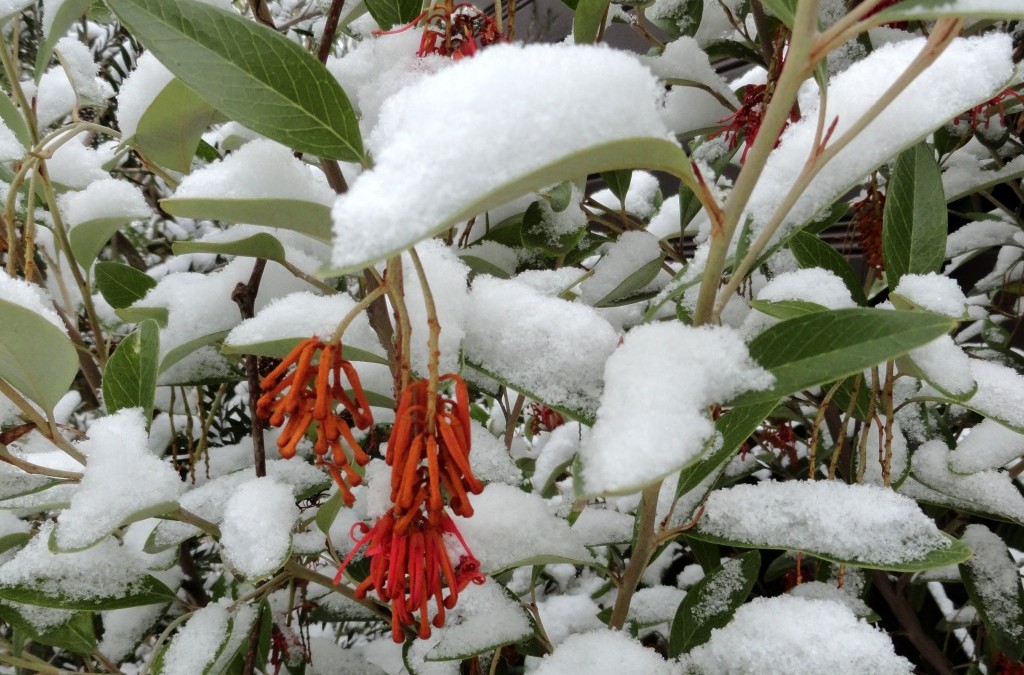 Team plant lust recently asked about your favorite plant for winter interest in the garden. The hook to get a reply was the chance to win a plant lust tote bag. Silly me! I thought this would mean a few one, or two, word replies – you know “just the facts ma’am.” But you are plant people after all, which means you love to talk about plants. And I love that about you…

There were multiple votes for Hamamelis (aka witch hazel), blooming as it does in the winter months. The flowers are a welcome sight, but the scent is downright heavenly.

Interestingly only two other plants were mentioned for their scent, one being Michelia doltsopa. Searching to learn more about this Magnolia relative, I happened upon a love-letter of sorts, on the blog A Growing Obsession. Read it here – but be warned – you might just find yourself in plant lust, and this one’s only hardy to USDA Zone 9.

Of course the reliable winter bloomer Helleborus was frequently mentioned. Helleborus argutifolius by name: “not only does this Helleborus behave so well all through the year, it doesn’t even blink or shrug during a heat wave or an Arctic blast.  And this week I already noticed flower buds starting to open for the winter show. All that bright, limey, chartreusey color in the middle of winter is eye candy for me. I situated this plant outside a window so that on a dreary winter day I can gaze at it when I’m trapped in the house.  And this lovely plant gives me one (just one!) little seedling every year that I can plant elsewhere or give to a friend.”

Another gratuitous Hellebore shot, because why not?

Only one Arctostaphylos (Manzanita) was mentioned, that being A. x densiflora ‘Howard McMinn’. While I don’t grow that particular Manzanita I can vouch for the beauty of all Arctostaphylos in the winter. The sexy mahogany bark and the early, vase-shaped, blooms are equally lovely.

Garrya eliptica ‘James Roof‘ was cited for it’s “for the extra long catkins in January”… and just what does “extra long” mean? 12″!

The person naming Illicium parviflorum ‘Florida Sunshine’ didn’t say why it got the nod – however with a name like that I guess they didn’t really need to.

Pittosporum tenuifolium (specifically  ‘Tasman Ruffles’) got a vote: “hands-down, at least this month. Bright aqua/mint green crumply leaves with dark purple-brown stems that really stand out. It brightens up the fading border next to my front door. So far it appears it will be truly evergreen, and it is *gorgeous* to gaze at.”

Only one conifer was mentioned, and it’s a good one, Pinus densiflora ‘Golden Ghost’ . “I planted this beauty in my garden 3 years ago and have continued to be captivated by it every time I see it. Like a lot of gold needled evergreens it does seem to intensify in its yellowness in winter but what I love most is that it has great color all year round. It has soared through drought, heat, cold, deer attacks and just about everything else.”

And who would have guessed? A Rhododendron made the list! R. luteum “Rhododendron ‘luteum’ holds its leaves of red-tinged gold through December.” I’m sure the yellow flowers and sweet scent are appreciated during other times of year.

“The humble Cotoneaster” was also mentioned as a favorite:  “I see them everywhere but they hang onto their berries for so long, they always add an eye-catching pop of colour to roadsides, verges and front gardens.” A specific species wasn’t mentioned so I’m taking the liberty of using this photo of an unknown (to me) Cotoneaster I photographed on a walk last winter, it seems to fit…

The purple-tinged leaves behind that Contoneaster  belong to a Mahonia, perhaps M. nervosa. While that specific plant wasn’t mentioned several other Mahonia were, including M. ‘Winter Sun’ and M. ‘Arthur Menzies’. About ‘Arthur Menzies’: “Its the center of activity in my garden. When in bloom during winter, it’s alive with birds, all drawn to the nectar rich flowers. It blooms reliably every winter and out of the last 15 years I’ve lost the flowers only once to heavy frost. I can’t imagine my garden without it. I know that it’s been available for many years now and may not be the sexiest thing out there but it’s proven its worth to me every winter and I am so glad I have it.”

Several people mentioned the Camellia as a favorite for winter interest, but only Camellia sasanqua ‘White Doves’ (‘Mine-No-Yuki’) was mentioned by name “They have been blooming for over a month and will continue on for another month. They are super stars!!!”

“Far and away the best Christmas plant down here in SoCal is camellia. It is between times for sasanqua and japonica, so we get a bit of both. They have the right colors, red, white and everything in between with shiny green leaves.” I couldn’t help but include this photo, even Camellia “trash” is beautiful!

A pair of dogwoods got the shout-out: Cornus sericea, Red Osier dogwood “It is a hard working superstar year round: I have one right outside a big window. Leaf off in winter gives us a front row seat to the chickadees and juncos that alight on the lovely red branches. ” And Cornus capitata because it’s “loaded with cornus fruit right now. Looks like it was decorated for Christmas with bright red ornaments.”

Finally, lest you become overwhelmed by the options, I’ll end today’s post with Edgeworthia chrysantha. This one apparently barely made the cut: “I must say it was a tough call, but Edgeworthia chrysantha beat out Helleborus orientalis by a nose”…  I guess we end where we started, with fragrance.

Thank you to everyone who took the time to reply, this was fun – and a little dangerous as my “lust list” has definitely grown. We drew 10 random names from all the replies, those lucky people have gotten an email to let them know a plant lust tote is theirs.

I’ll continue the review of your winter-interest favorites next week, meanwhile if you’re curious about the plant at the top of this post – with the orange-red blooms – it’s Grevillea victoriae ‘Murray Valley Queen’. Photo taken in my garden last weekend.