Writing for two blogs (this one and my personal blog, danger garden) it’s sometimes hard to decide where to post certain stories. In early September I had the pleasure of visiting Gossler Farms Nursery and accordingly took a gazillion photos. When I finally started editing them down (a task made sadly easier by the fact it was a beautiful sunny day, thus harsh light and shadows made many of them worthless) I still wasn’t sure where to post them. However, after Megan shared bits from Roger’s visit to Xera Plants last week, it became obvious I needed to do a Part II “Gossler Farms, in person” post here.

This is the scene that greats you next to the office/aka Marj Gossler’s home. 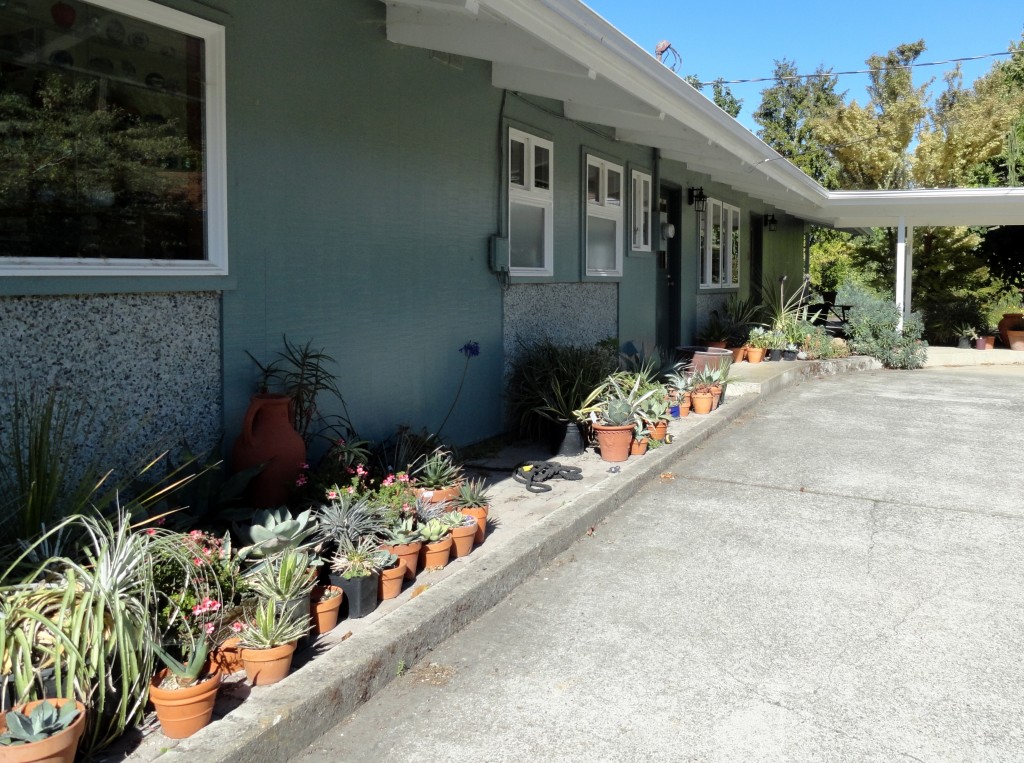 If I showed up here knowing nothing about the Gosslers this collection alone would win me over. On her previous blog, Nestmaker, Megan tells of the Agaves being referred to as pets, I like that – no doubt it means they’re well cared for. 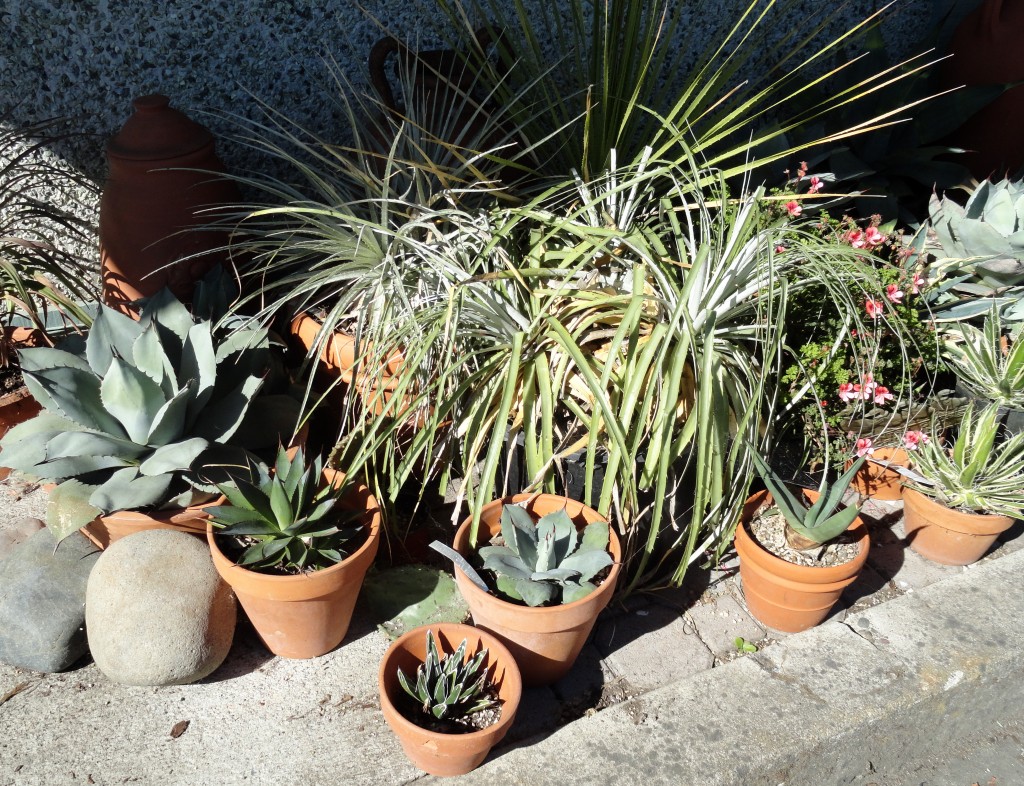 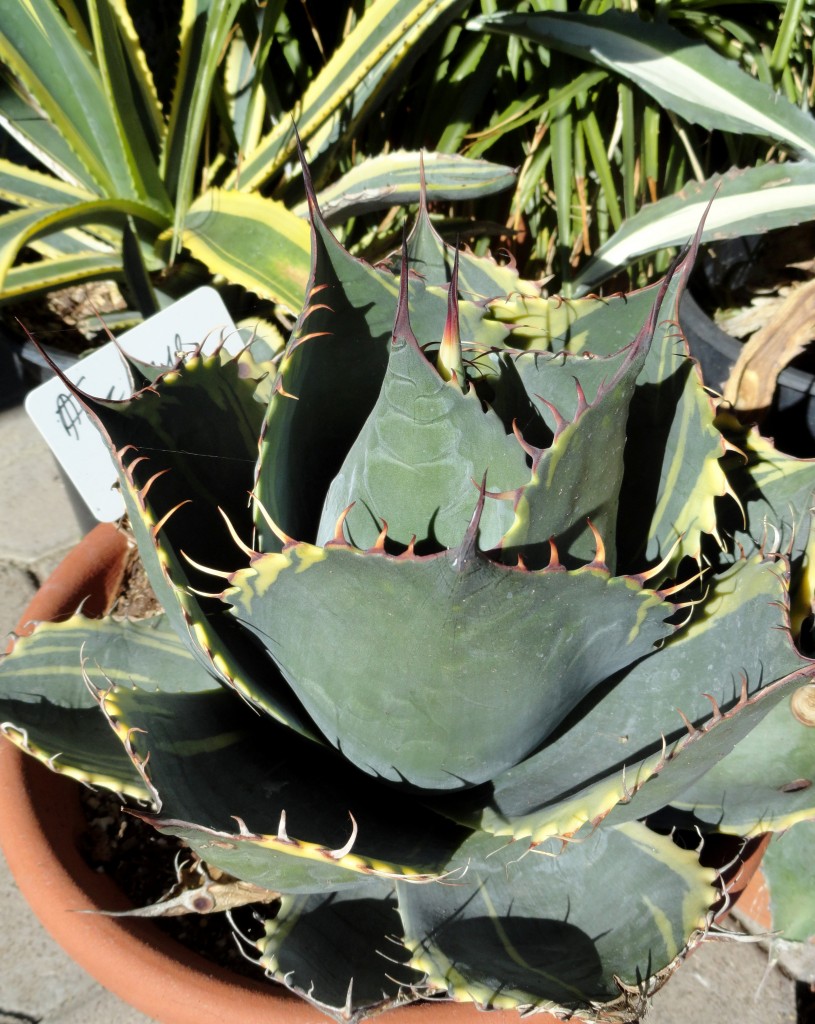 I was lucky to get a personal tour through the display garden from Roger Gossler. I neglected to get a photo of him, but snapped several of this adorable pair. They darted in and around us taking side-trips for a swim in the river. I think they must be two of the luckiest dogs you’ll ever meet. 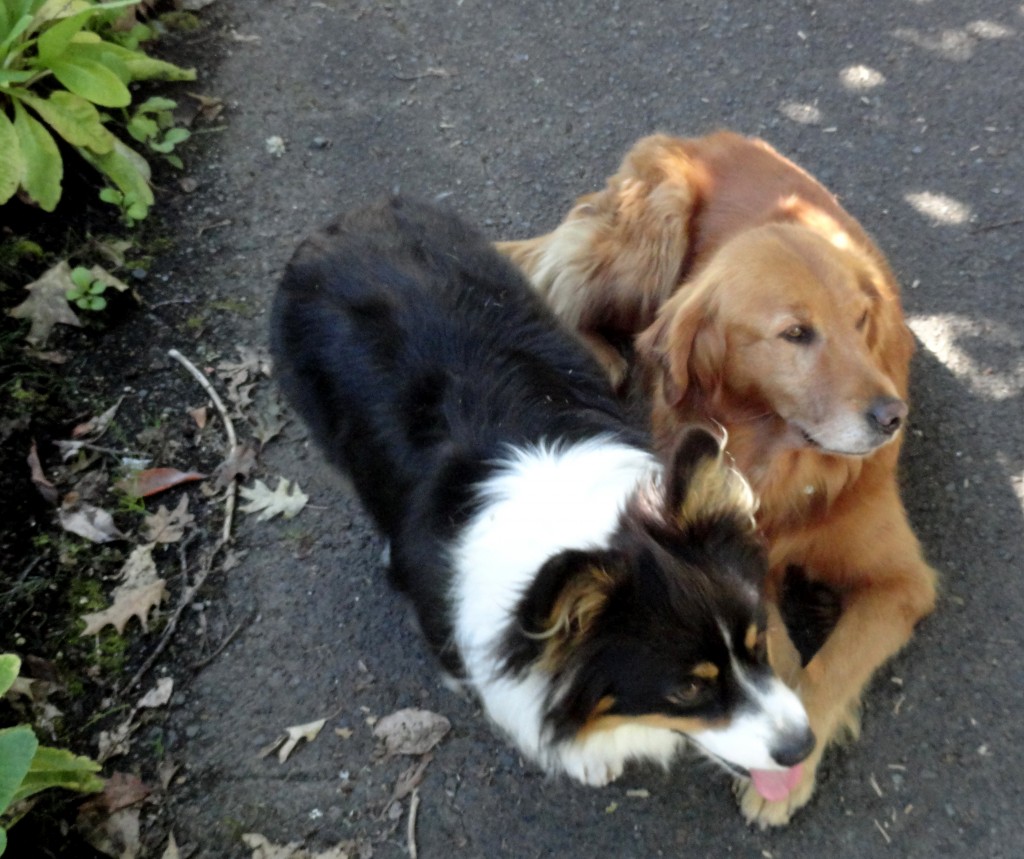 But on to the plants! I’d previously only visited the nursery in the early spring. Walking around the display garden in September gives you a very different feel. Looking at this photo I was struck by the similarity between the form of the ferns surrounding the urn and my Dioon edule, a Cycad. 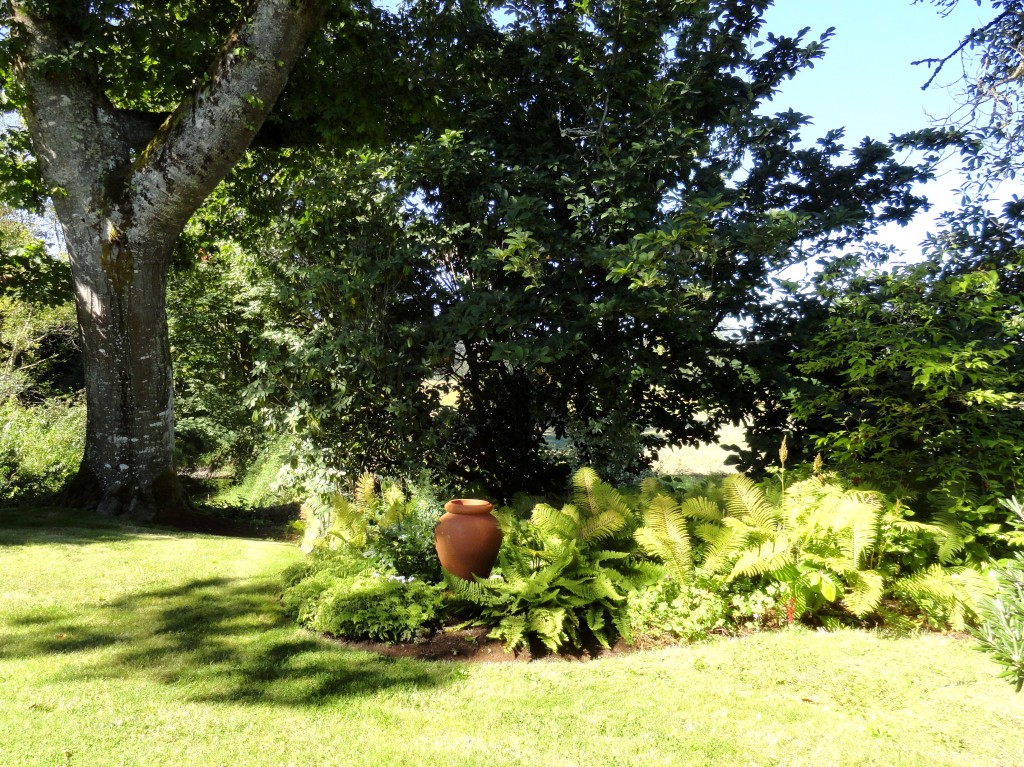 Gossler’s is known for their Magnolias (among other things) and I wish I could remember the name of this fabulous specimen. 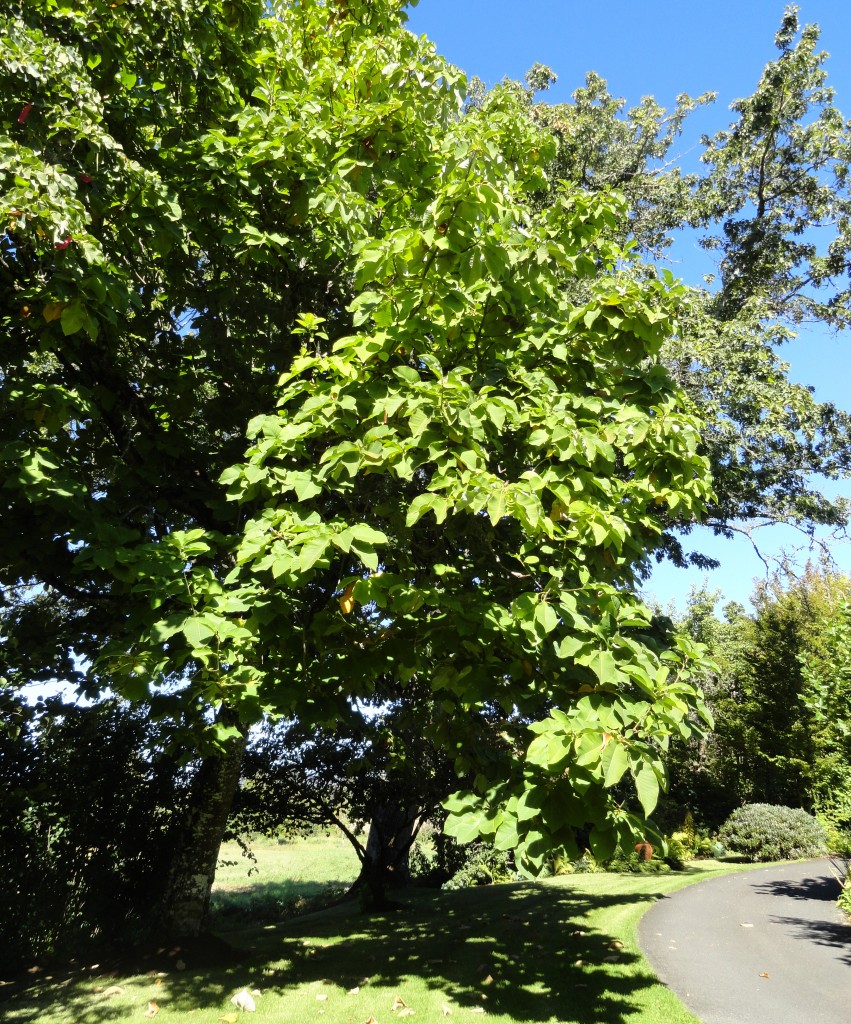 It has a great seed pod. 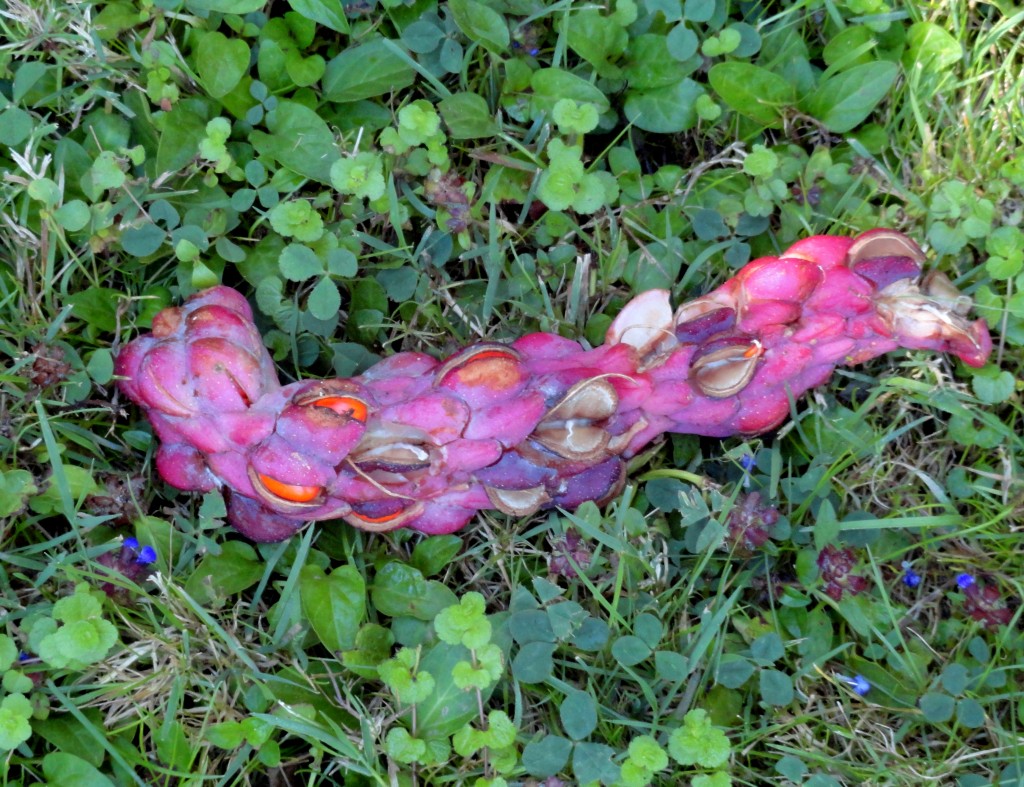 I think this may be a Stewartia monadelpha, or not. I should have carried a pad and paper with me as we walked. 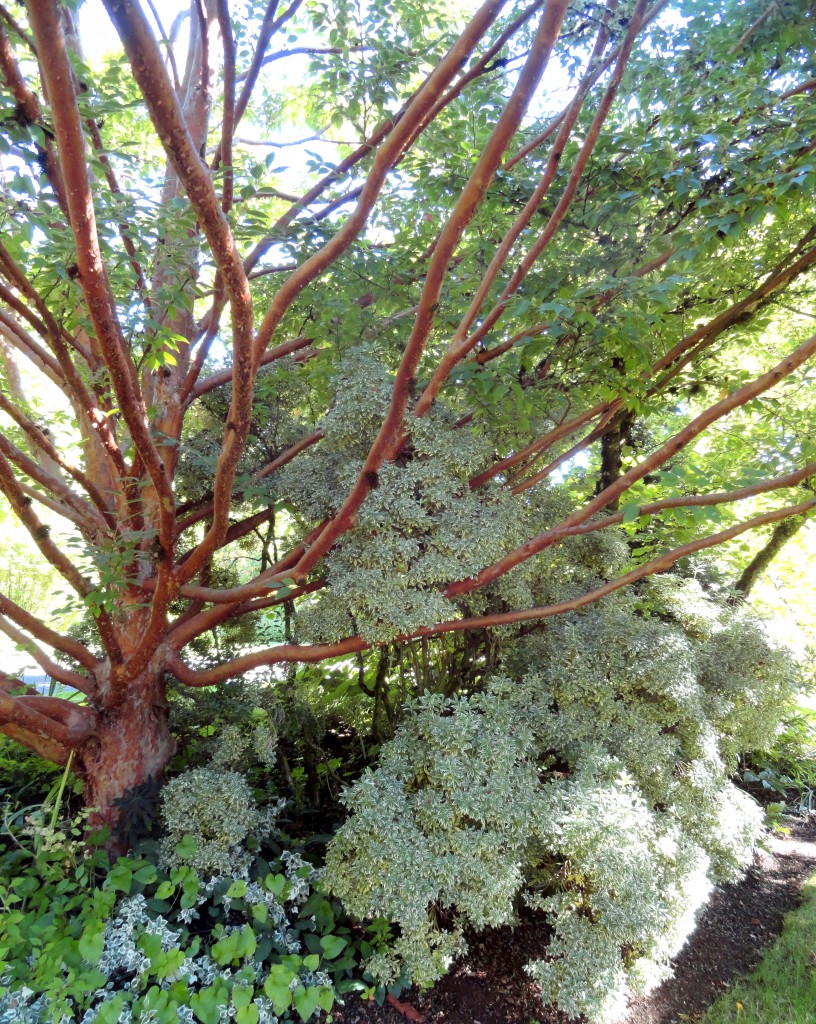 I’ve never been as enchanted by Persicaria blooms as I was here, they were lovely. 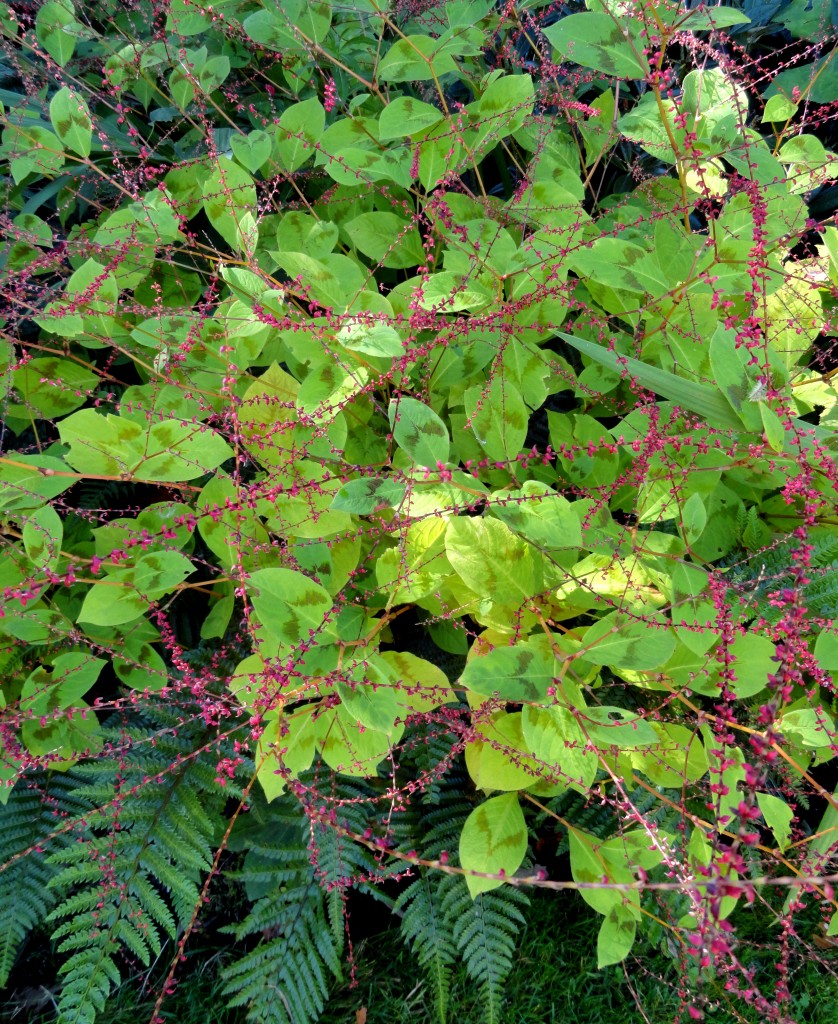 Catalpa or Paulonia (on the left)? Either way it’s big-leaf perfection. 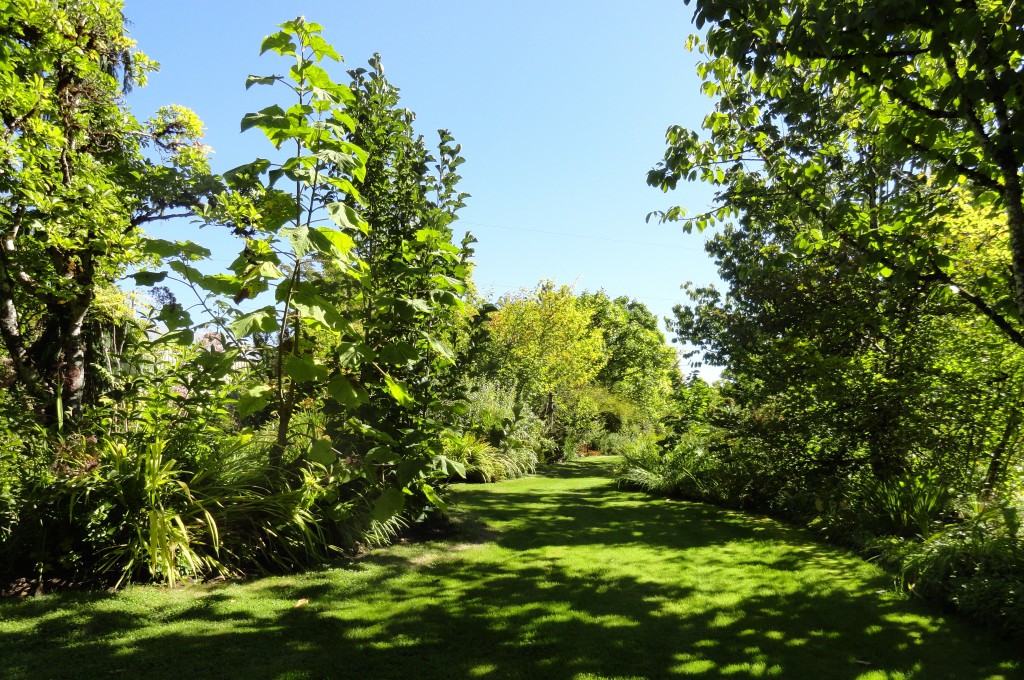 New to me, Gunnera perpensa. 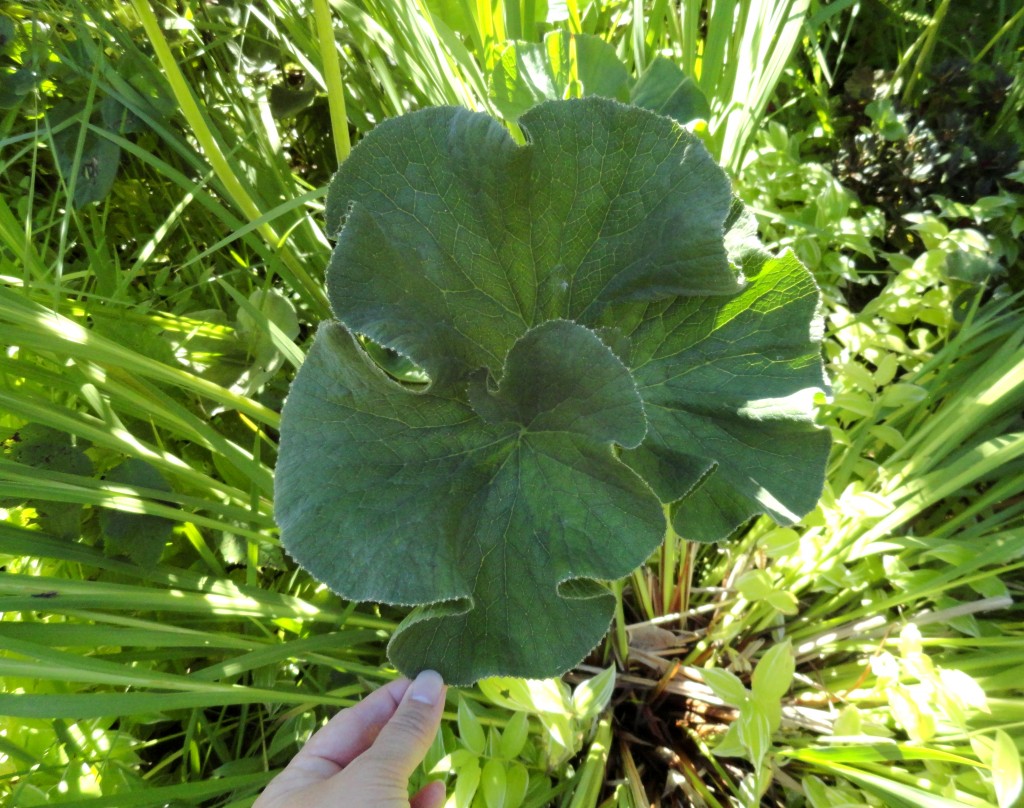 I was instantly smitten and one came home with me (thanks Roger!). 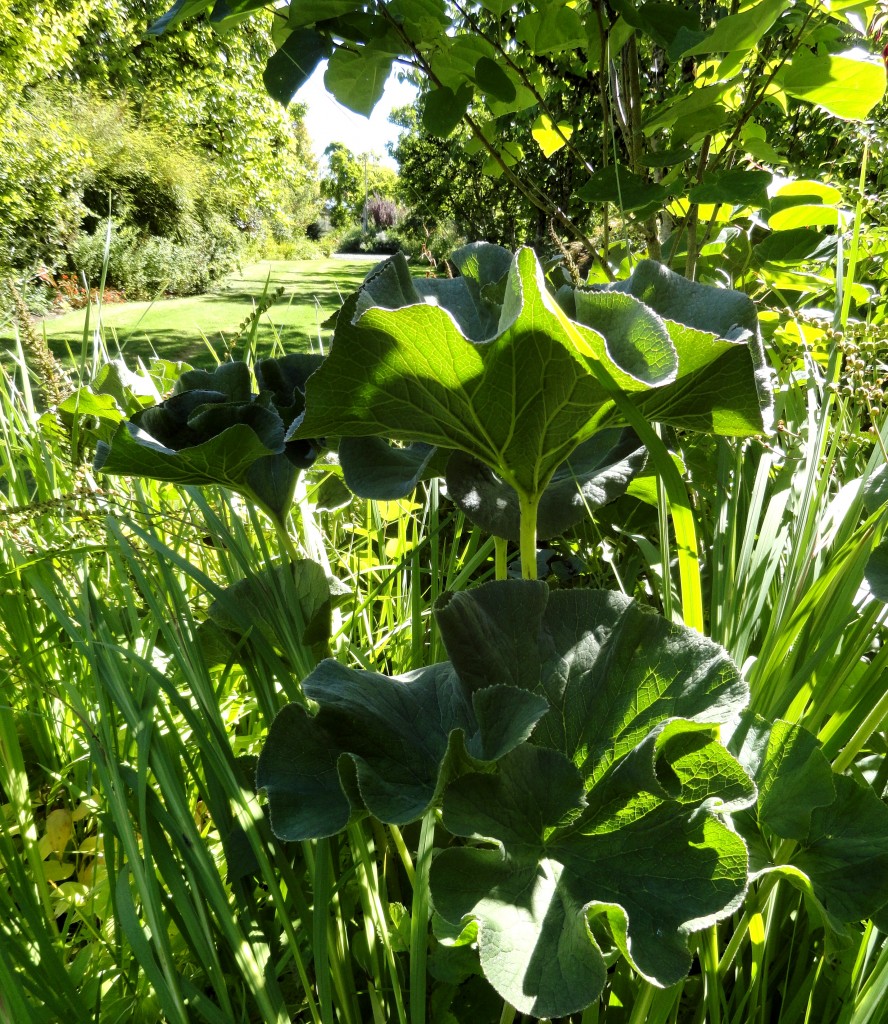 It’s in a container now while I find a suitable spot. 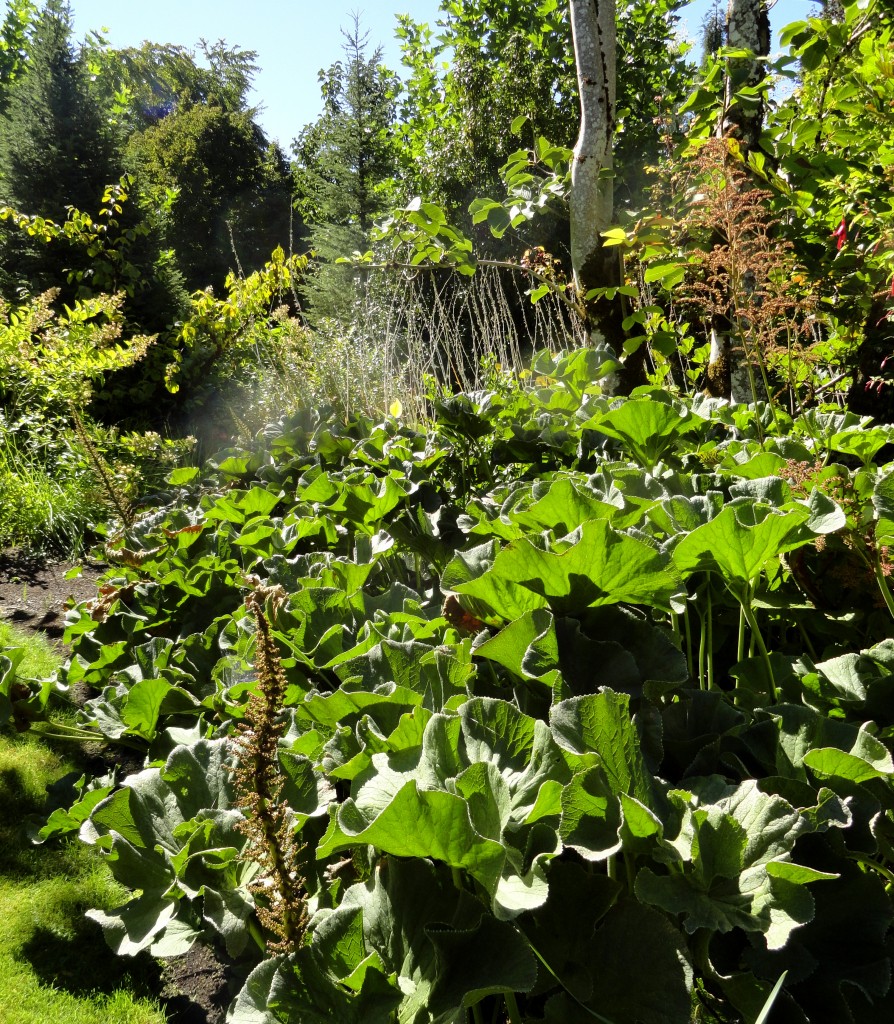 Here’s Benny after a swim, followed by a run around the garden, do you think he knows how cute he is? (I vote yes, yes he does) 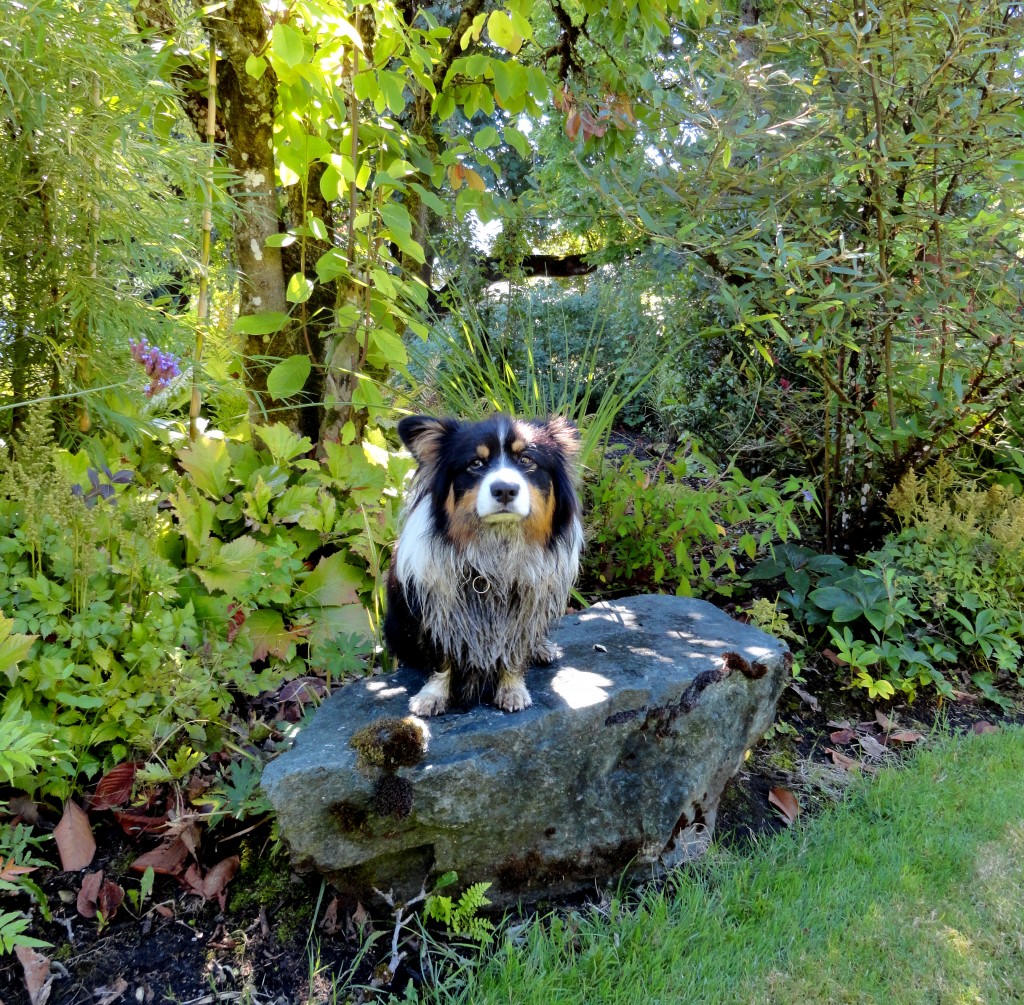 One of many breathtaking Rhododendrons (another Gossler specialty). 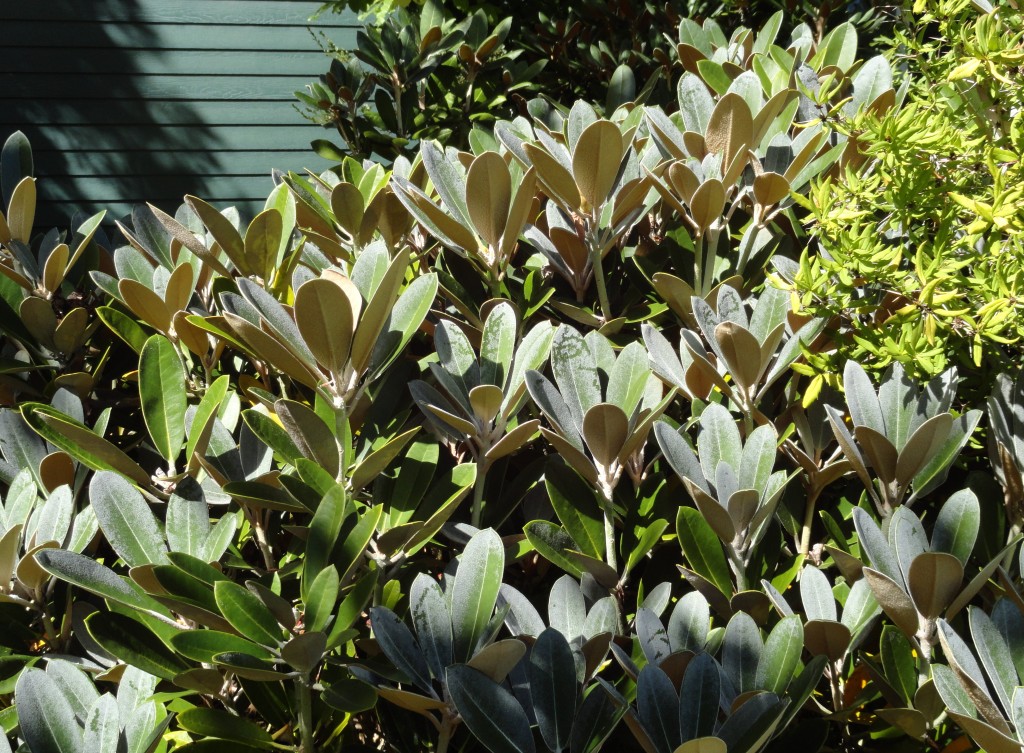 And a striking Tetrapanax growing in front of Roger’s home. Yes, there were babies running out from it a bit. 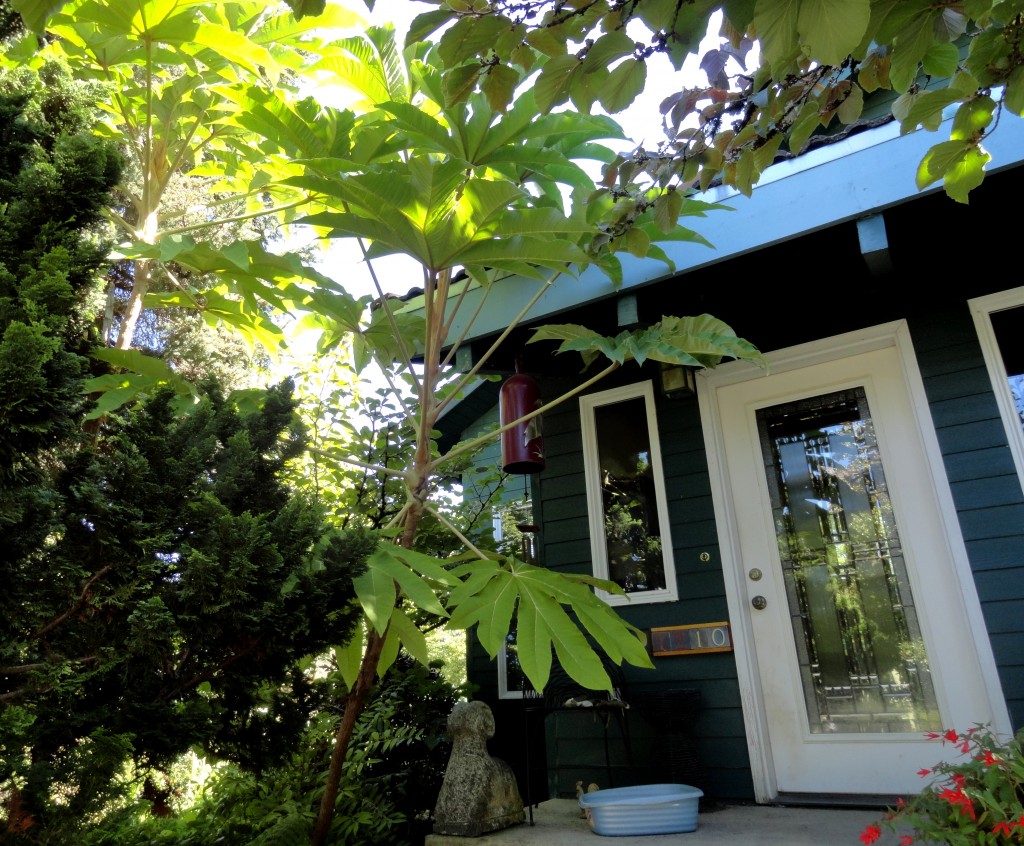 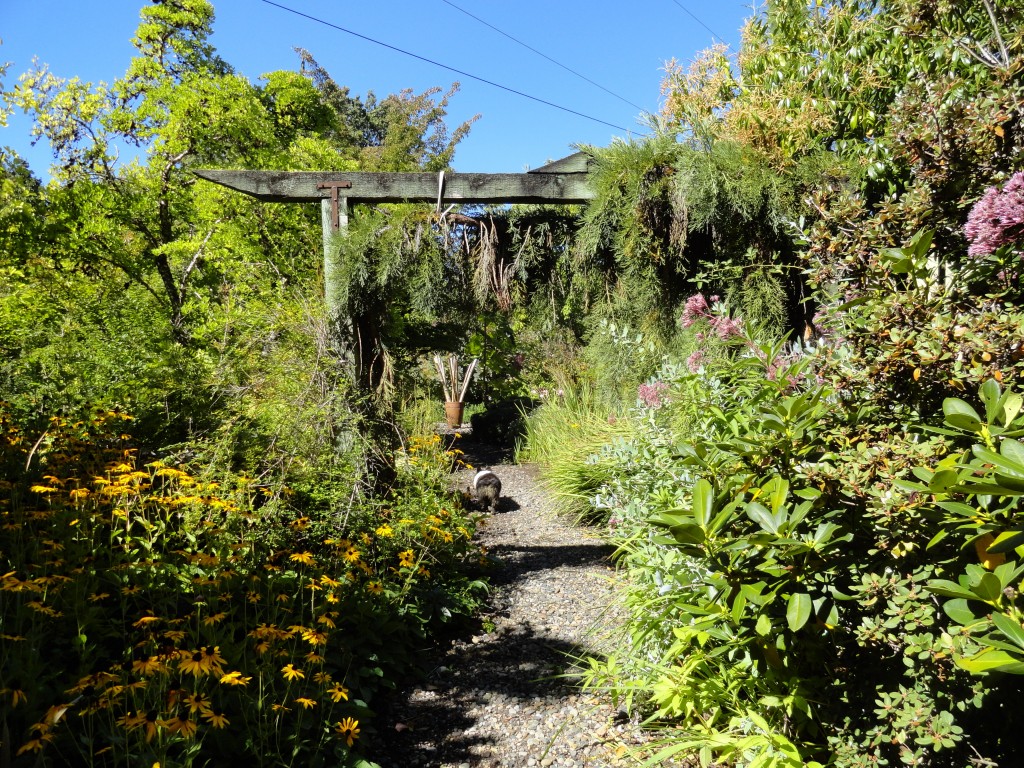 The last time I was here this bamboo filled urn had been blown over in a storm. I like the  late summer version better. 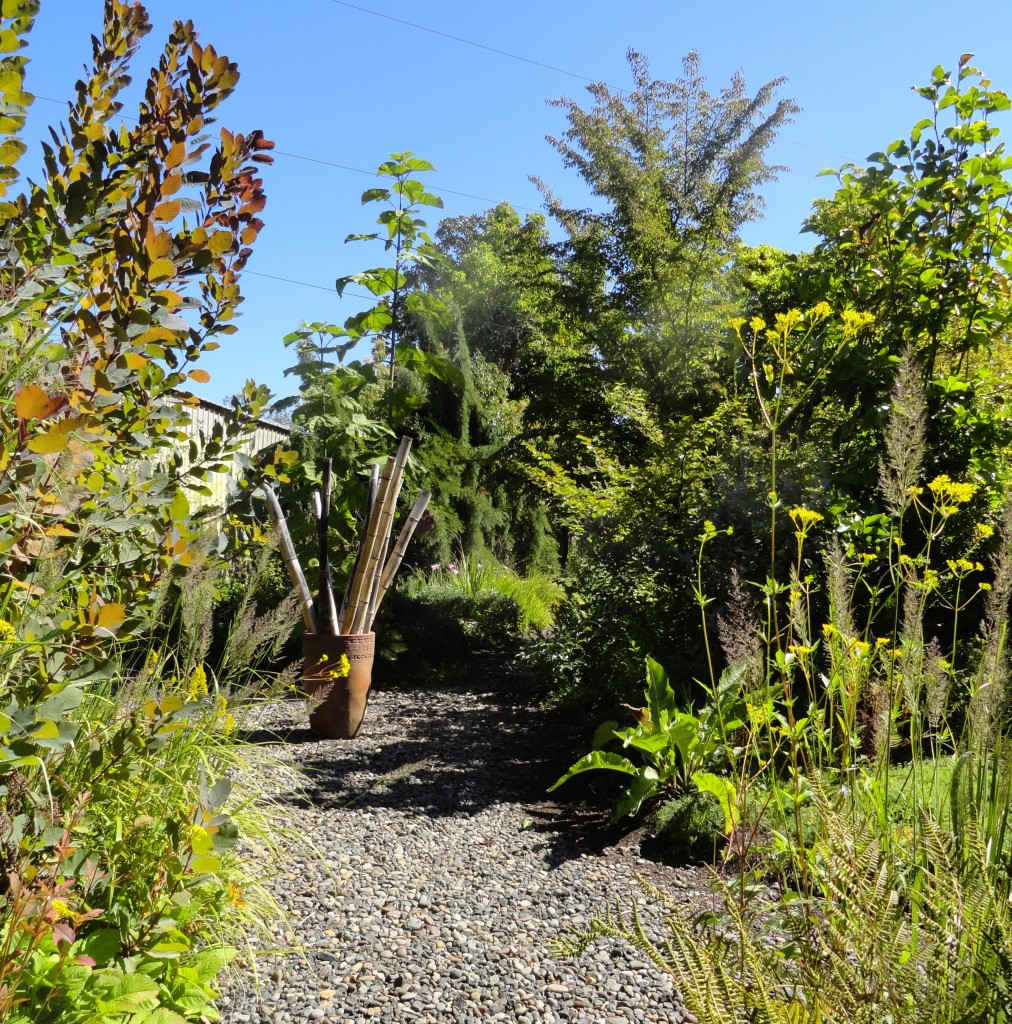 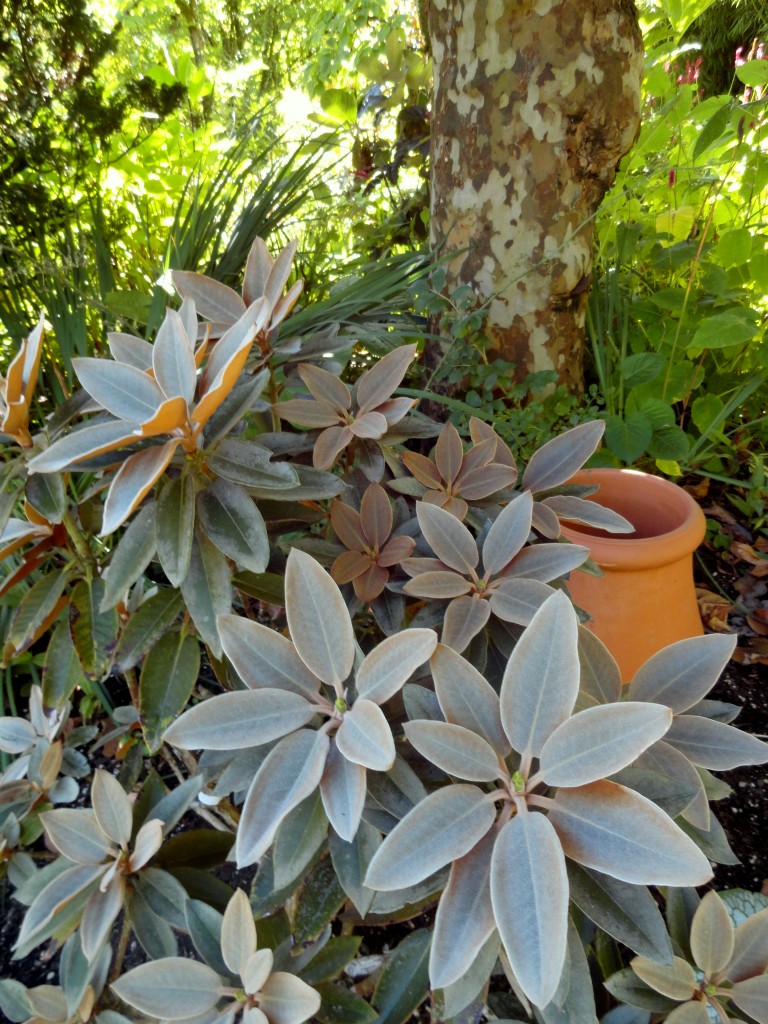 Now it’s time to wander the shade houses, aka the danger zone as this is where one is tempted to pick up plants and take them home. Cornus sanguinea ‘Compressa’ 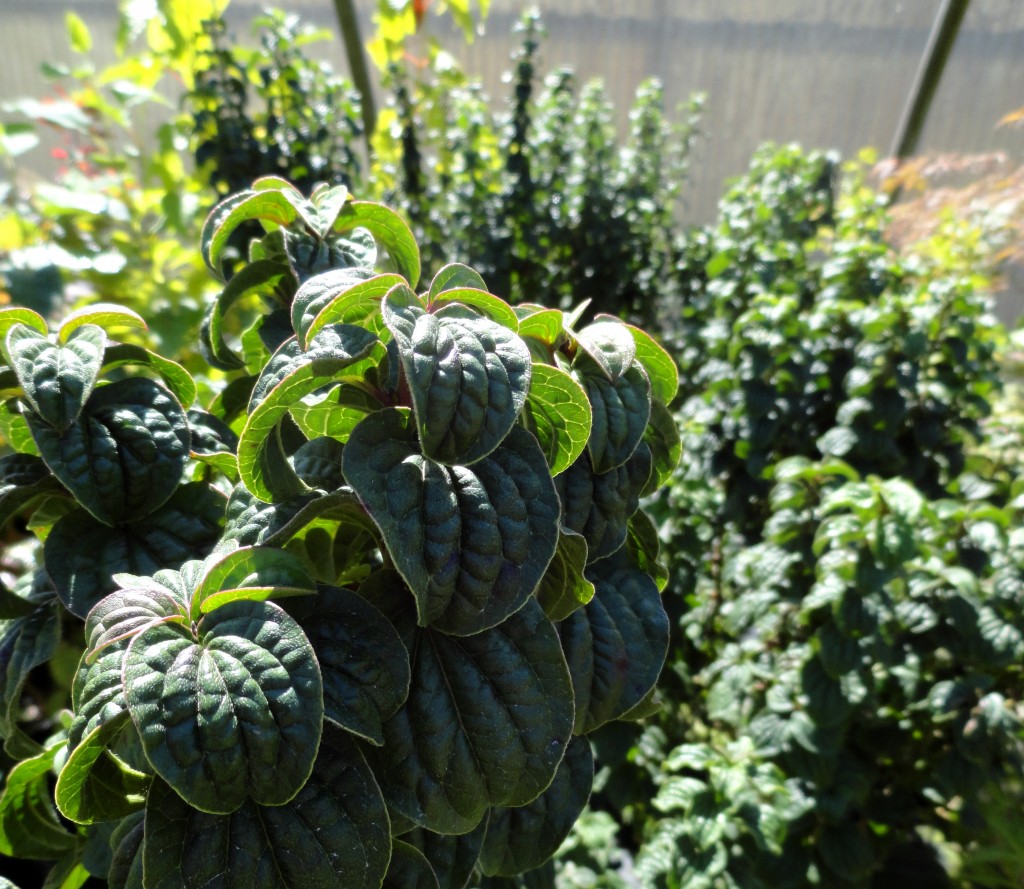 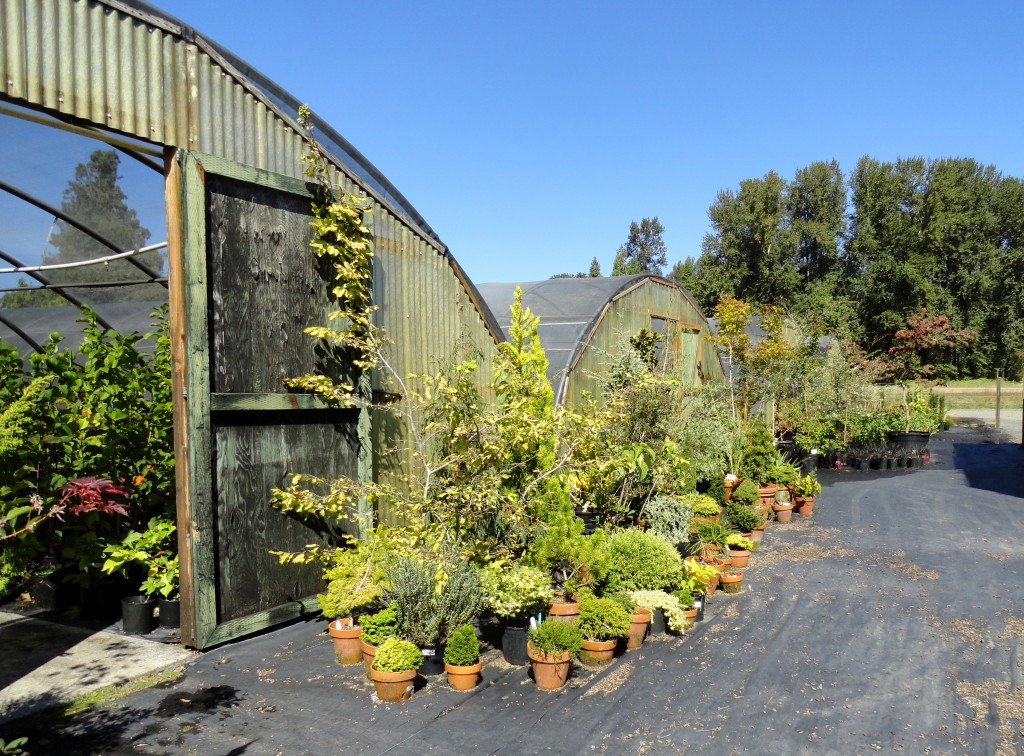 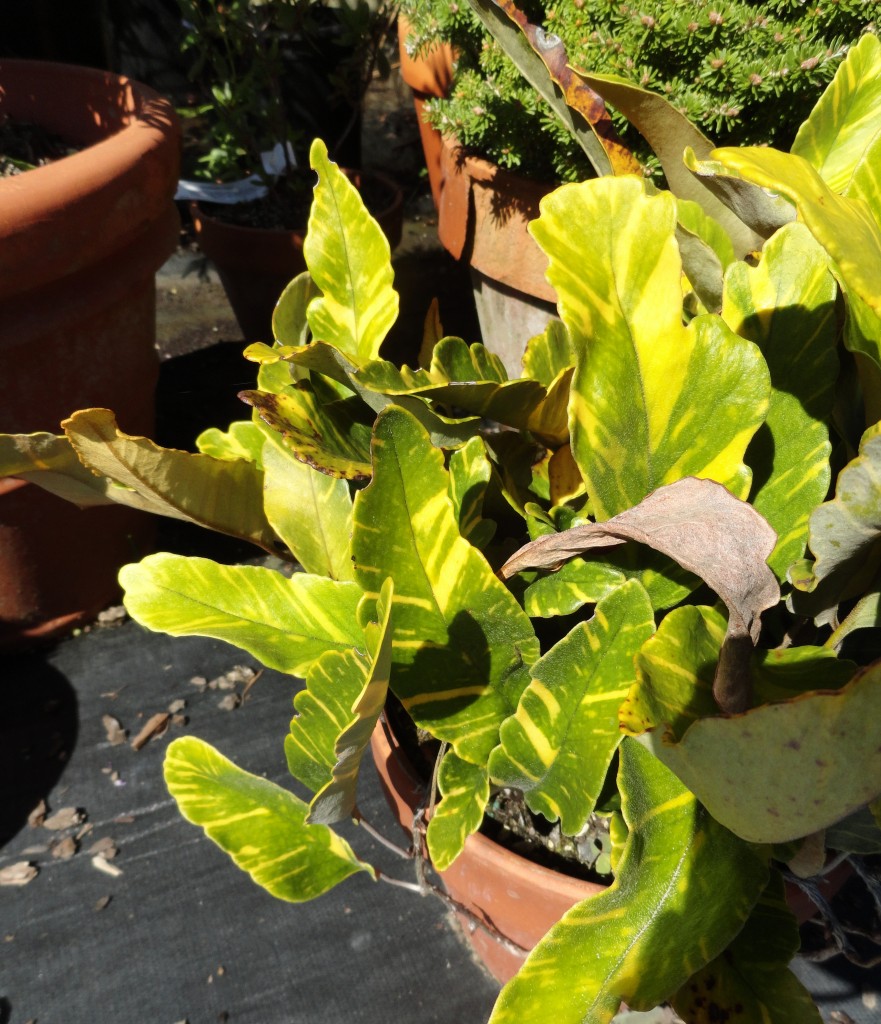 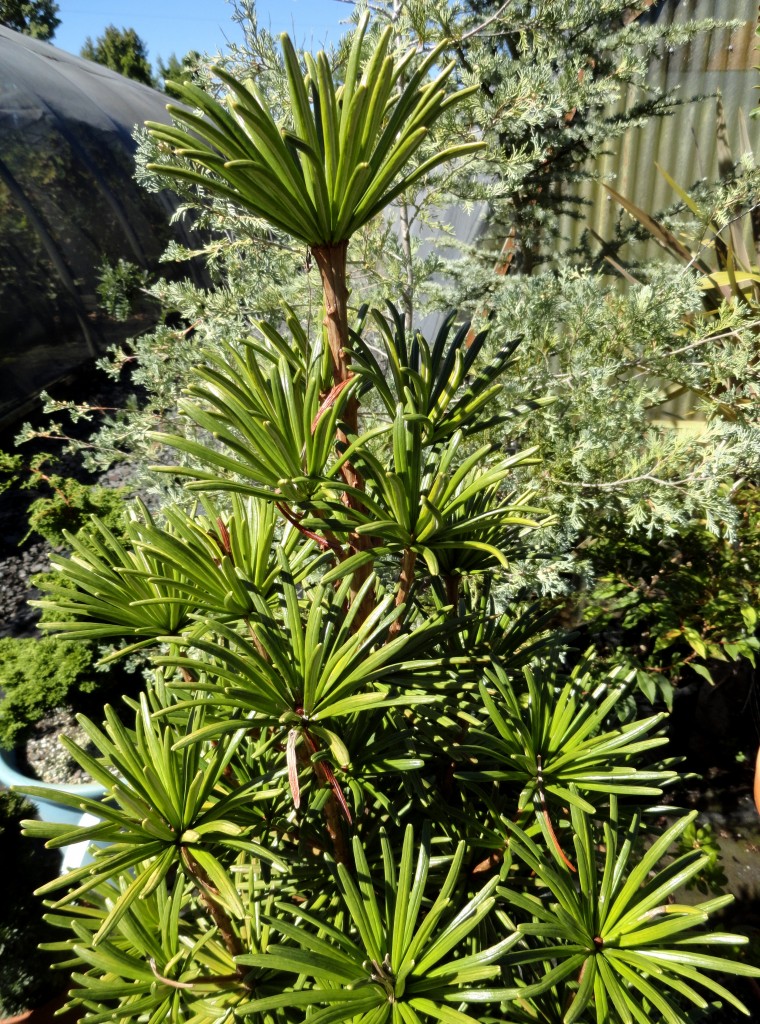 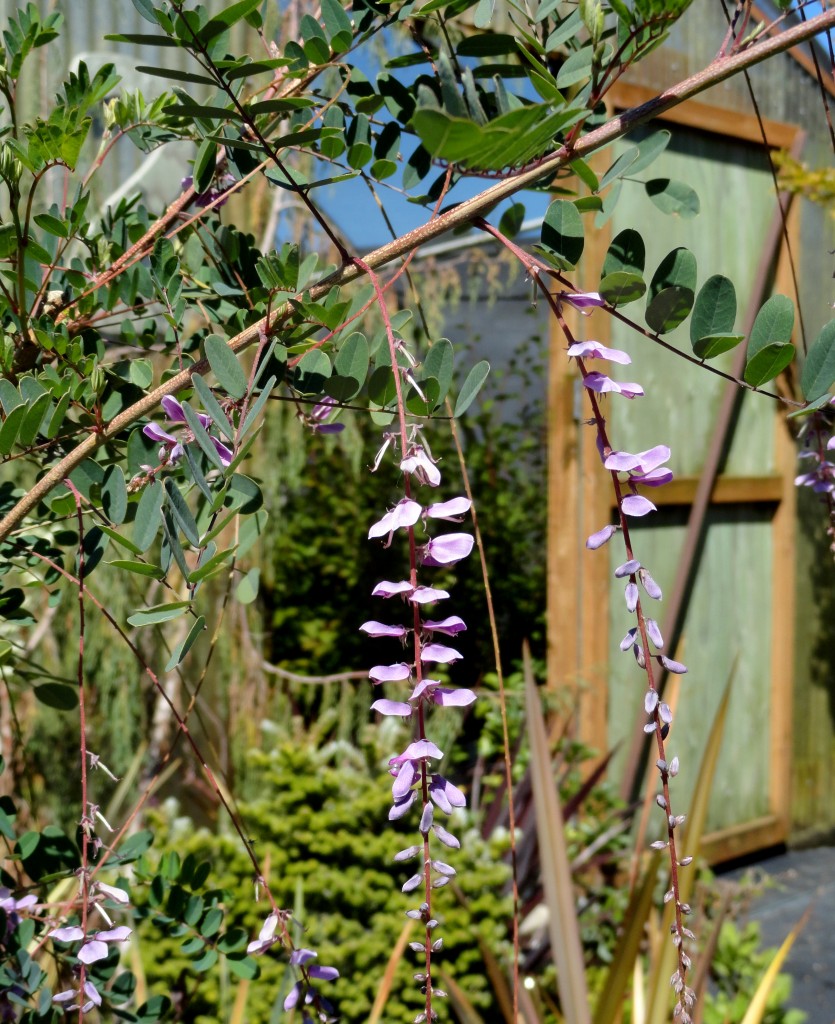 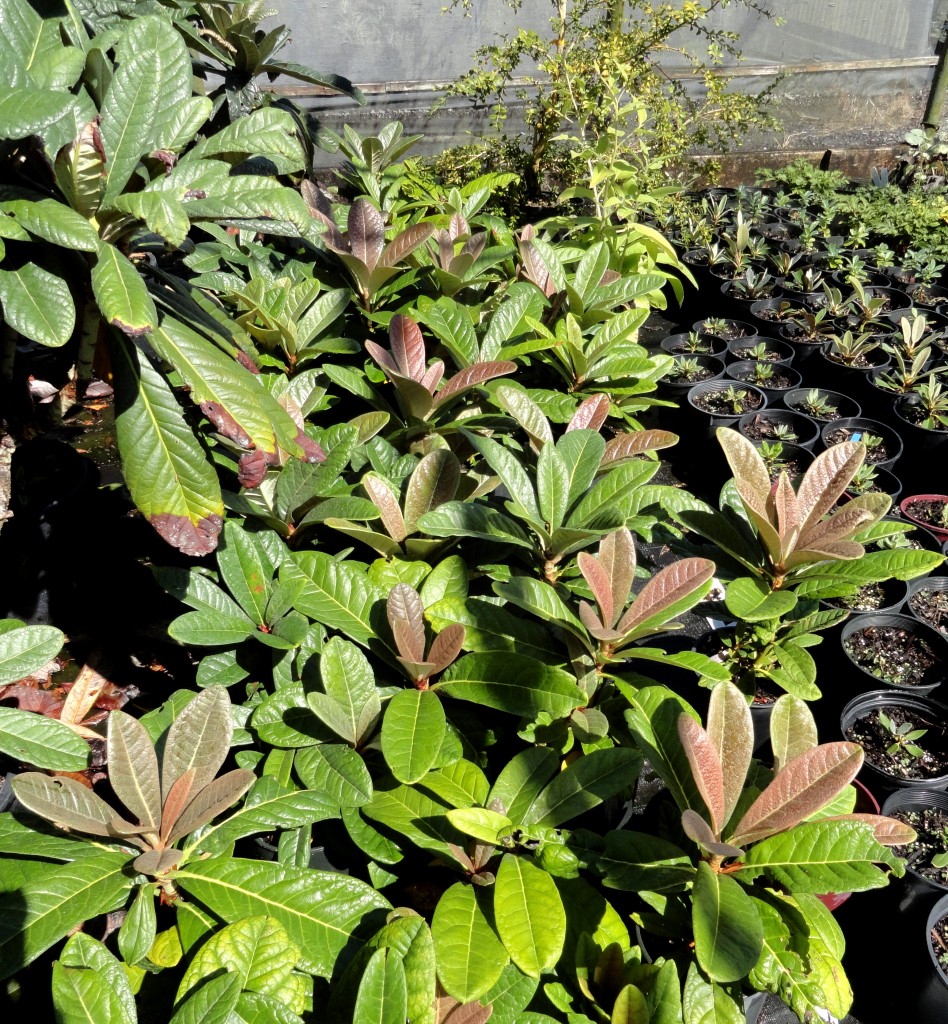 I didn’t see a name on this fabulous Oak, I was smitten though. 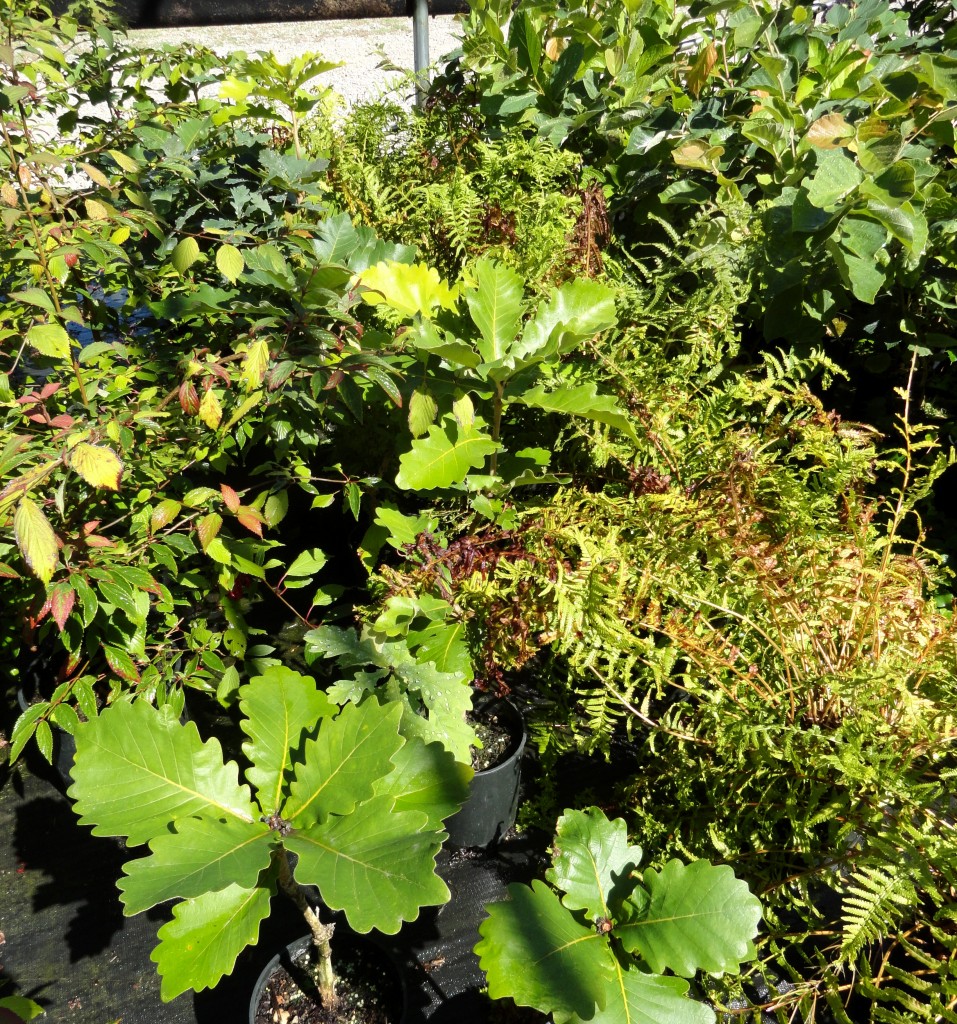 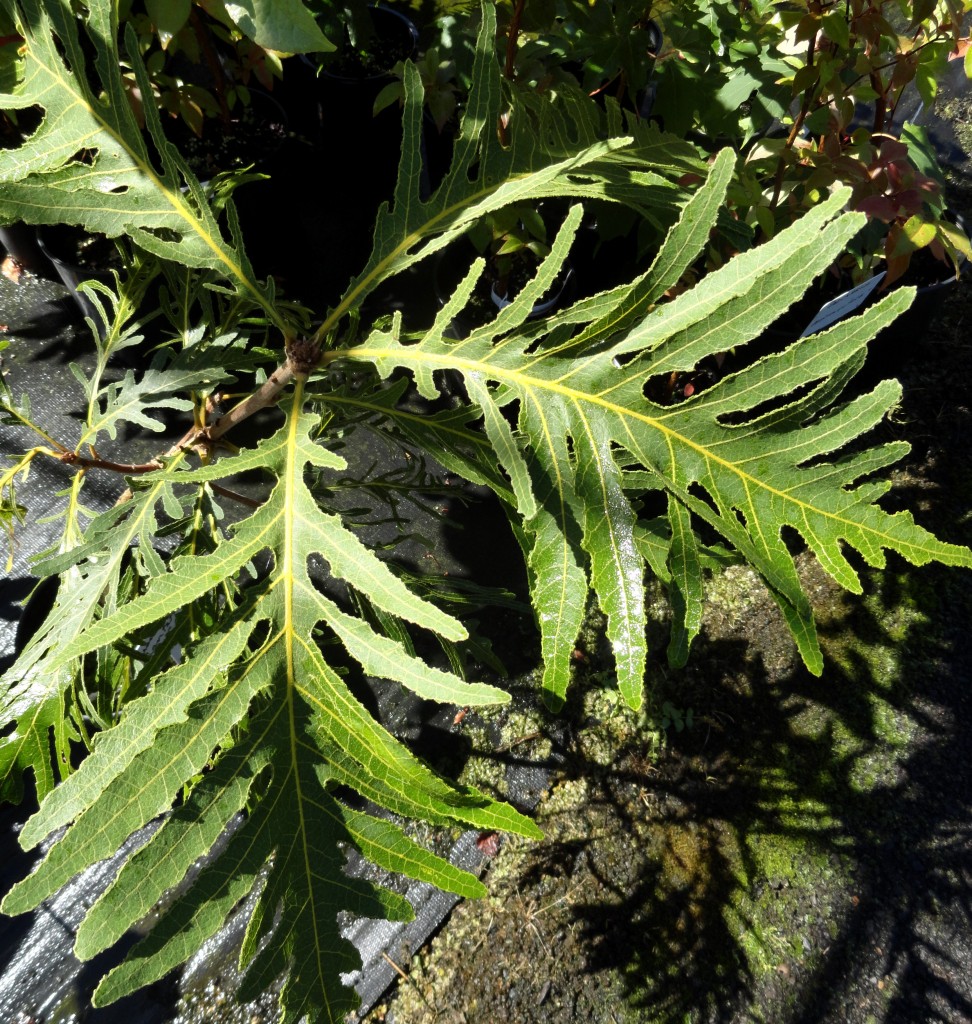 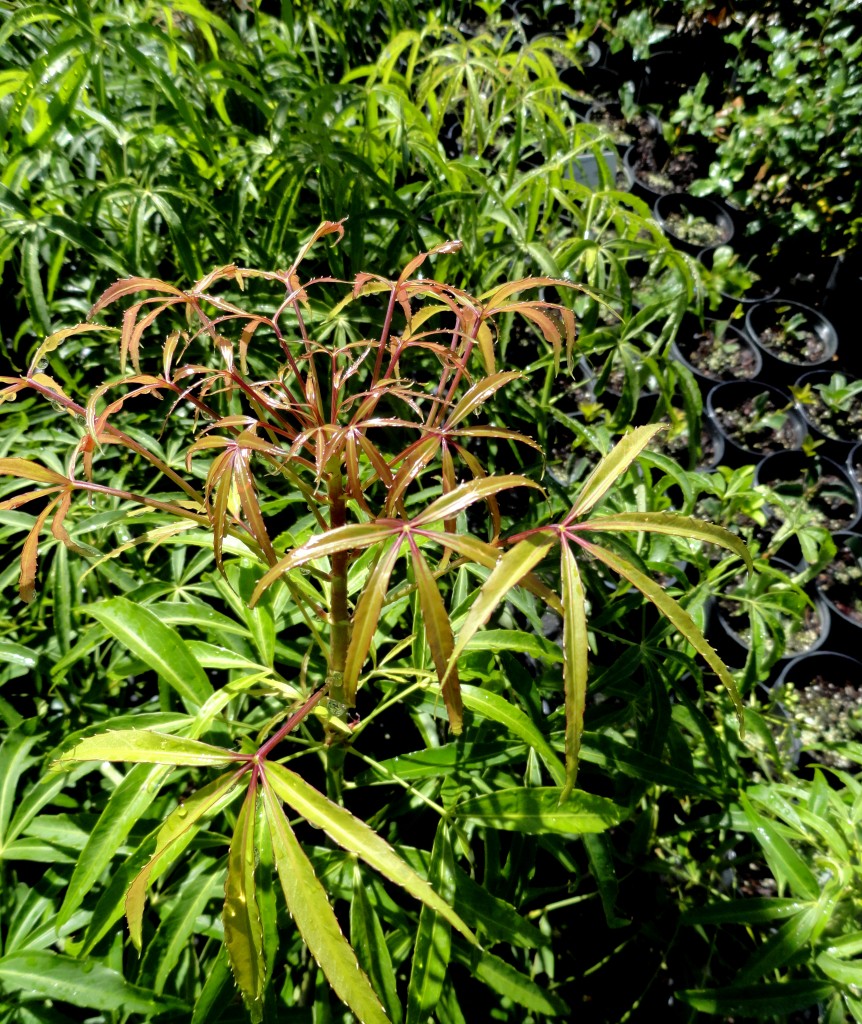 And finally, a wrap on this lengthy post, with a look at the other plant I couldn’t resist – Leucothoe fontanesiana ‘Rainbow’ – it’s pretty spectacular, and already planted in my front garden. 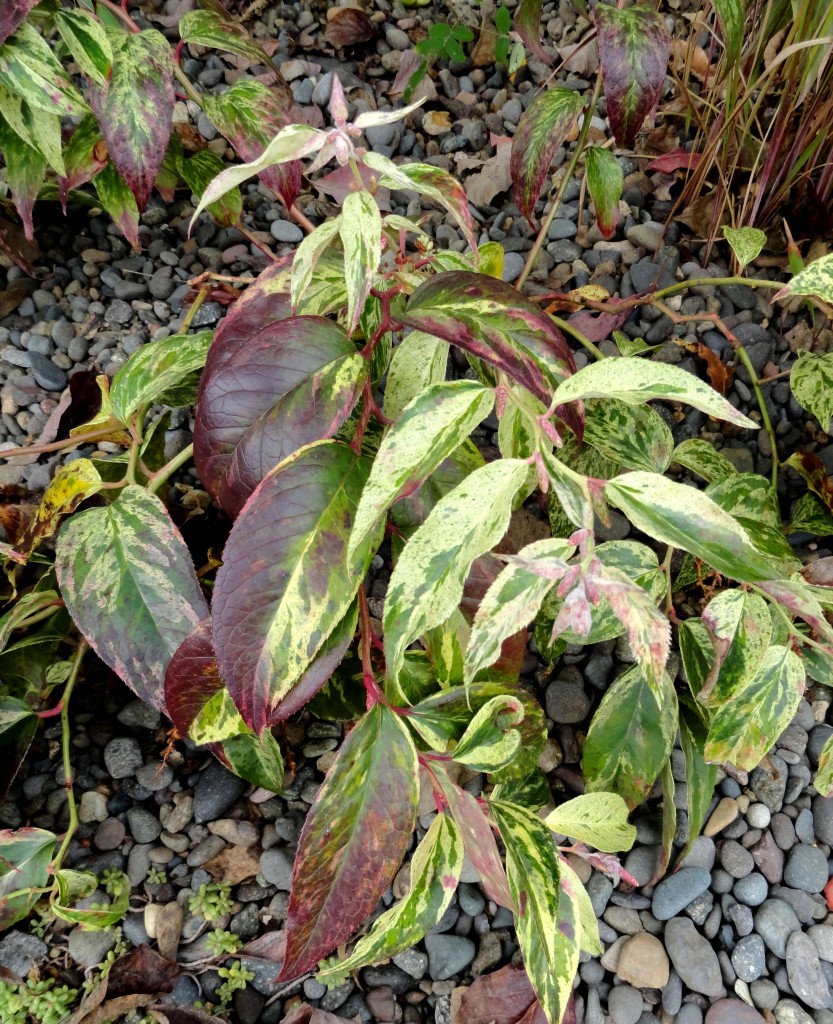