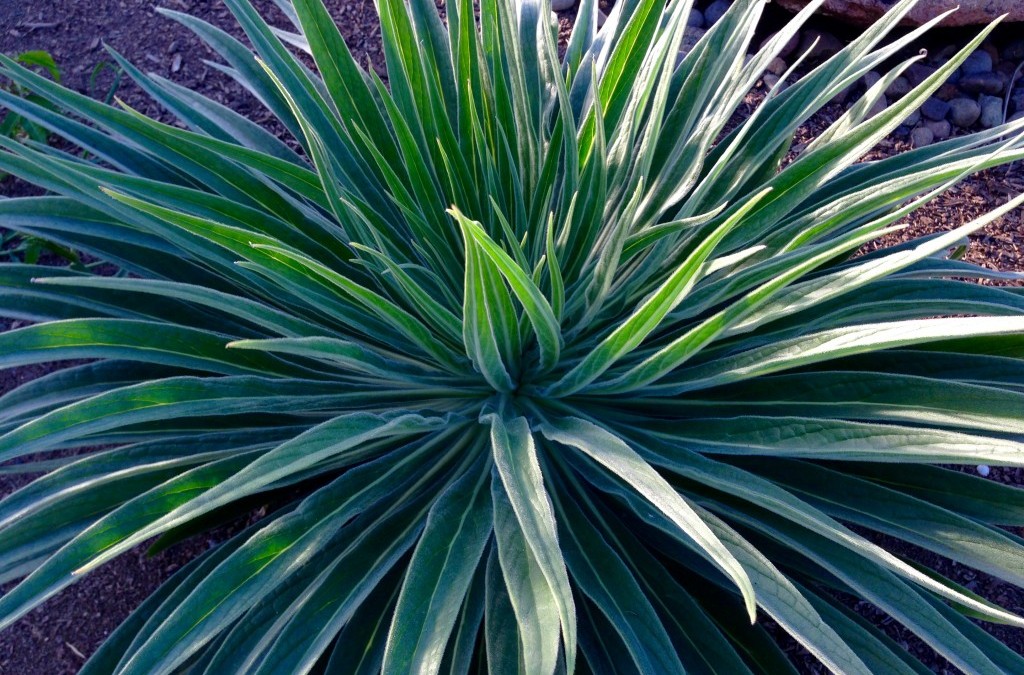 Oh sure, there’s a lot going wrong with this dog-forsaken weather. But there’s also quite a bit going right. So today, I’m looking at the garden as half full. (Even if all the rage is warning us we’re due for a 9.2 earthquake that will swallow up 700 miles of the Pacific Ocean coastline. Thanks y’all, like earthquakes are not on my checklist O’worries already.)

Do you think the bee on the left has been tippling? I’m not certain which Magnolia this is, but it’s on the small side. I inherited it with the house, and I’m glad I did. It’s been blooming its heart out for weeks. I’m calling it M. ‘Edith Bogue’ until someone corrects me.

It’s not late summer when this Galtonia is supposed to bloom, but it’s looking great. This plant was rescued from my previous garden and resurrected by the modest Amy Campion over at the World’s Best Gardening Blog. She shared back with me.

Here’s the Galtonia in context. I got the Canna ‘Bengal Tiger’ from Lance Wright at Garden Riots. I thought it looked so much like my C. ‘Pretoria’, and kept comparing to see how the leaves were different. Oooooh, C. ‘Bengal Tiger’ aka known as C. ‘Pretoria’.

It’s gorgeous, but not entirely cooperative when I try to capture its image. If I were taller. (I always have to look up subjunctive verbs. My friend Gail Tester caught this mistake in the opening lines of my novel–no it is not published. One of these days. Anyway, wishfulness tells you to use “were” instead “was.” Or as my grandmother Catherine Beatrice always said, if wishes were horses, beggars would ride. And that’s how the Irish encourage their children!)

Sort of a close up. It won’t hold still for its portrait.

I transplanted a couple Oenotheras earlier this year. Why didn’t I know they like more sun than they were getting? I’ve researched almost all of the 30k+ plants on plant lust, but I still can’t seem to keep track. And I’m not a scientist…

Look, another sleepy bee. Any bee-ologists out there who know what this is? It really is that florescent green.

The flowers on this Dianthus barbatus ‘Green Wicky’ are fabulous and long lasting, if not a little lazy in the upright department. I found mine at Garden Fever in PDX, but internet info on the plant is a little sparse. Mostly popular in cut flower trade. Please disabuse me of this notion if you know better. THX

This is probably my most oft included plant, Eryngium agavifolium, but can you blame me. The foliage is amazing, and then it throws up these incredible thistle-like flowers. The pollinators, like me, are mad for it.

Canna musafolia is another stellar performer. I can’t resist showing you before and after photos. I always worry about the pests getting them in the beginning, but Megan (fellow plant luster and my daughter) says, don’t worry. When they get taller, seems it’s too far for the pests to bother traveling. Seriously, how does the earth do this?

Friends Kathy and Dennis gave me several hardy bananas, mostly likely Musa basjoo. They had next to no roots, and I thought, that probably won’t work. But wonders never cease.

And, ta dah, it’s alive and blooming, Caesalpinia gilliesii. In fact, I have two, and they’re both blooming. But the one that is performing the best was actually purchased for a friend. Then, an unfortunate problem developed–and I had to keep it for myself.

And finally, my crack team of fellow office workers. Along with being steps from the the garden, the animals are a super bonus of working from home. 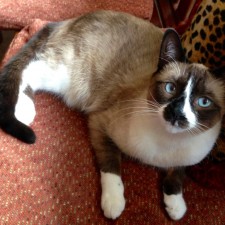 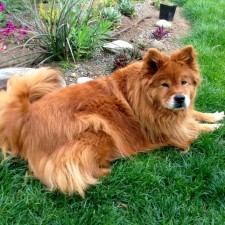 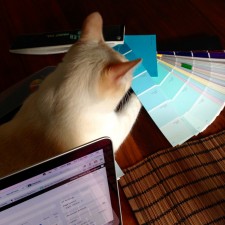 Stop by and leave a note about what’s happening in your digs. We LOVE to hear from you.

p.s. The photo at the top is an Echium wildpretii.