A few of my favorite ground covers 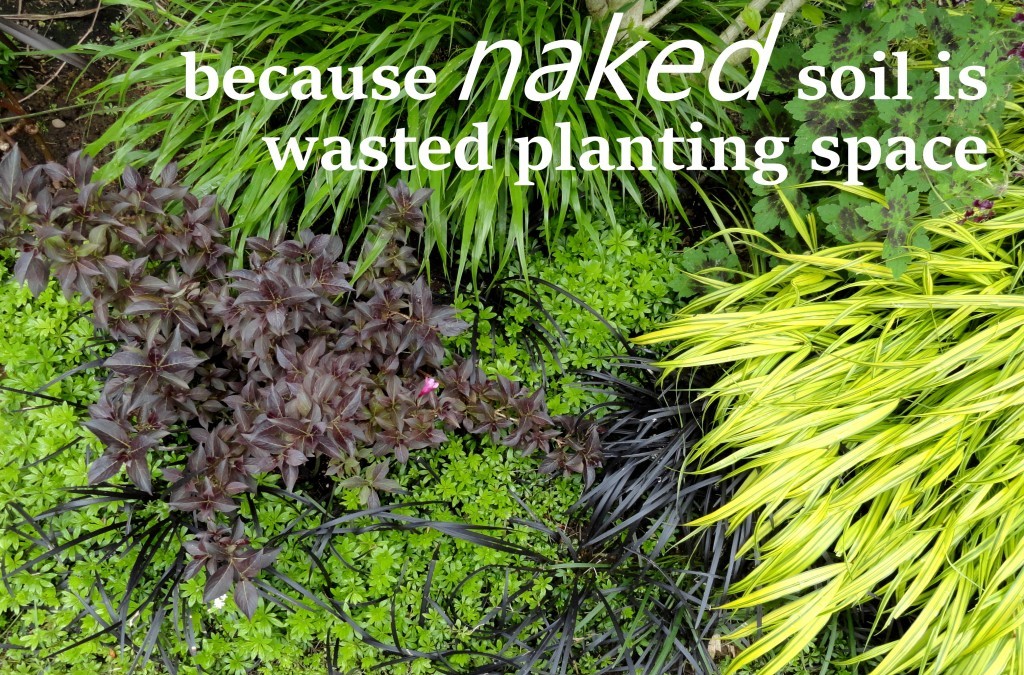 I remember nervously sharing my garden with a famous friend, she was generous with the compliments and over the course of her visit took several photos, a few of which ended up in her book, Lawn Gone! One of her comments stuck with me, it was about how I’d paid attention to covering the ground. I hadn’t ever really stopped to think about it, it was just second nature. If you’ve planted something that leaves room under it to plant something else, then why the heck not take advantage of it, right?

Thinking about my desire to cover the ground, and reflecting upon this week’s blog post, I’ve realized team plant lust has more than a few obsessions in common, one of which is ground covers. After all there have been no less than three blog posts dedicated to them already (one, two, three), as well as Megan’s post yesterday praising lawn alternatives.

This post is less grand and more personal, sharing a few ground covers that I am happy to have in my garden. Maybe one of them will inspire you? We start with the front garden where the reigning champ is Juniperus conferta ‘Blue Pacific’…

It was almost an afterthought, since Grevillea juniperina ‘Molonglo’ was covering the ground so well. Come to find out when the garden hits the low teens the Grevillea is no more. I’ve planted five more of the juniper and can’t wait for them to start spreading.

The back garden is home to most of my groundcover success stories, not all that surprising since the front garden is covered with gravel – so there’s less bare soil to start with. This mash-up of Ophiopogon japonicus ‘Nanus’, Saxifraga ‘Primuloides’ and Selaginella kraussiana ‘Aurea’ is just inside the back gate. These low growers are a soft, cool, place for a dog to lay while keeping an eye on the neighborhood comings and goings. It’s pretty amazing that it took me so long to realize what type of plants could withstand a fur-covered 23lbs regularly being parked on it.

In fact it’s so good I could have written an entire feature on it alone.

It takes a while to bulk up but once it does, wow! As a bonus if a piece breaks off just stick it into the soil and voilà! You’ll have a new plant in no time.

Yes, Galium odoratum is considered by many to be a potentially invasive plant, and at times I’ve wondered if I should have ever put it in the ground but it’s really not a thug. It’s just happy to spread itself around. I love using it as a green carpet. 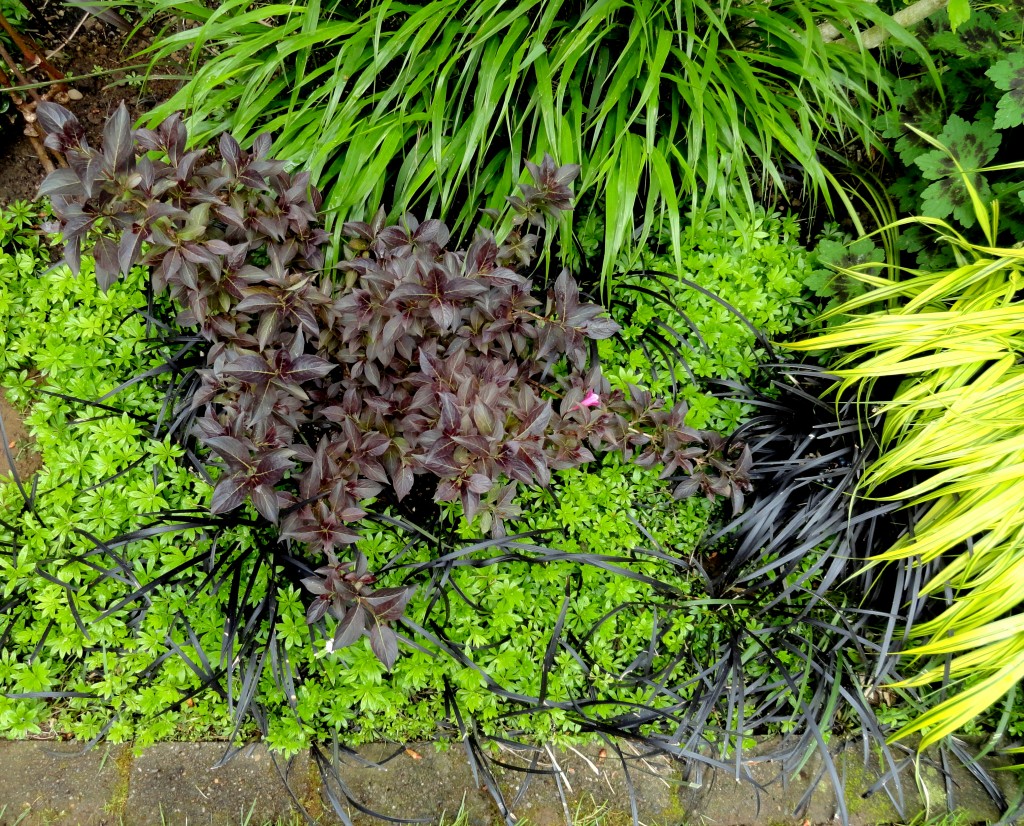 Lysimachia nummularia is as common as dirt, and I love it. Also tough and persistent, also easily pulled if it goes where you don’t want it.

Saxifraga umbrosa ‘Variegata’, I see it now, I should have just done a post on Saxifraga. Each individual rosette on this plant is about three times the size of those of Saxifraga ‘Primuloides’, plus it has a nice bright yellow variegation which I still feel is subtle.

The only thing I don’t really like about it are those flowers. Ah well, they only show up once a year. 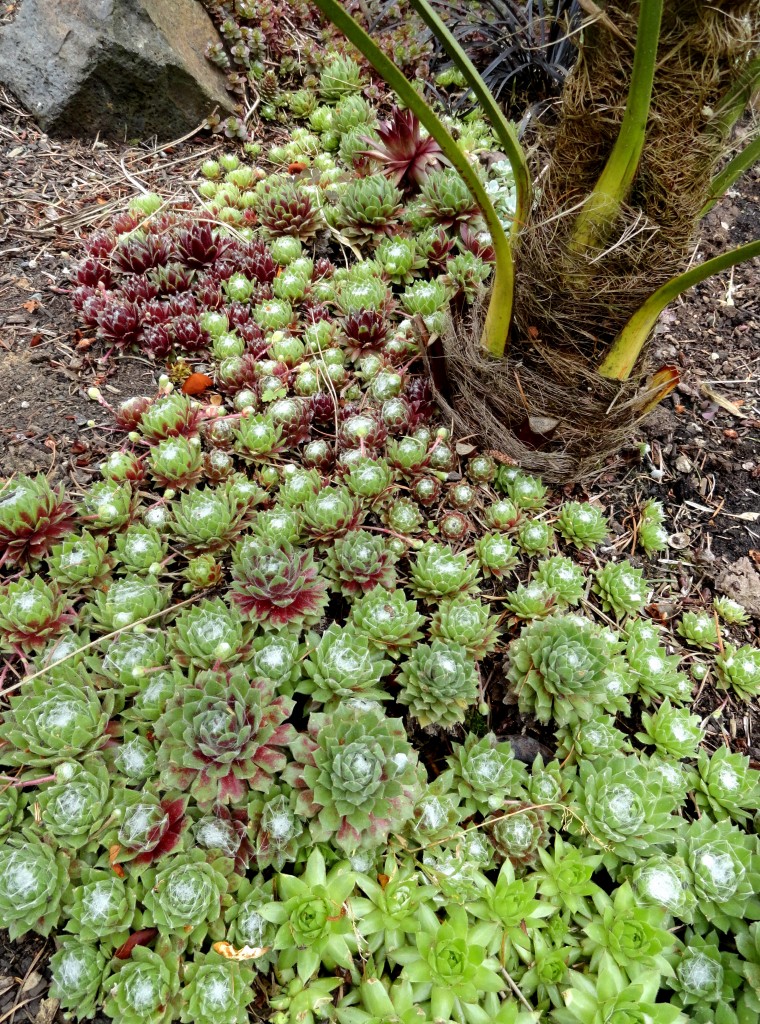 Another Sedum spathulifolium, this one is ‘Purpureum’

Ajuga reptans ‘Black Scallop’ is currently covered in blue flowers. I’m sharing an older photo so you can appreciate the dark foliage, which is what you get 90% of the year.

Sedum spurium `Dragon’s Blood’ and Sedum rupestre ‘Angelina’, I appreciate that the ‘Dragon’s Blood’ allows others to work into it’s mat. Do you see the singular Sedum spathulifolium in the middle?

I’ll end with another shot of Saxifraga ‘Primuloides’, just in case you needed another gentle push in it’s direction…