The Hot Bed is Alive 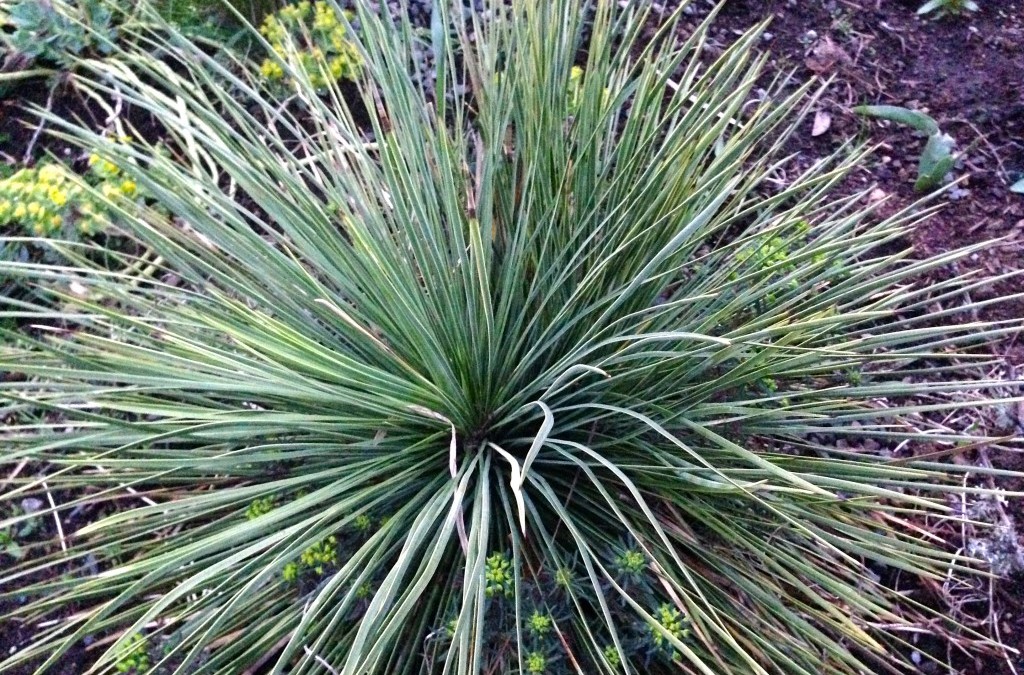 Is it just me, or is everyone surprised beyond pieces that the garden resurrects each year? It’s so exciting to see there are actually plants growing out there.

I planted several Tetrapanx papyrifer this past fall that came from Ron Wagner before he moved to Thailand–with just his suitcase. Can you imagine? Ron had a fabulous garden, and I got so many great things from him; but sometimes I forget to appreciate what I’ve got, and I pine for the plants that got away.

I’m sometimes tempted to go back check out his garden now that there are new owners, but I’m afraid I’ll discover that piece of Paradise gone.

I’m thrilled I got this Dragon Urn. I just wish I could settle on where I want it to park. It’s in the Hot Garden near the patio right now, and I can see it from my kitchen work station–which makes me so very happy. Dragon Pot is quite difficult to move, though I’ve done it a couple time. I push it gently over on its side and can then roll it about–though not freely, or entirely in a straight line. (Imagine how Lucy would do it–something like that.) And then, of course, I can’t set it back upright on my own. Oh, pish. I’ll worry about that later.

I always imagine that I’m keeping year-round-interest in mind, but come dead of winter, that poor garden looks bereft. This is the point at which I wonder how I managed to blow the previous year’s plant budget. (Using the term “budget” is a considerable overreach, but I figure I’m in good company.)

There are a few good bones that don’t let me down for year-round interest. They all look better with a little seasonal companionship.

Here are a few shots of Hot Bed, the south-facing garden closest to the house, with plant friends springing forth. I did my best not to weed and stick with the picture-taking task at hand. I kind of like that little cute guy nestling up to the Yucca whipplei–for now. But I guarantee you, an injury is coming up. 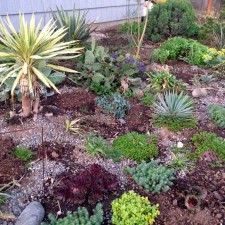 Hot Bed friends on the rise 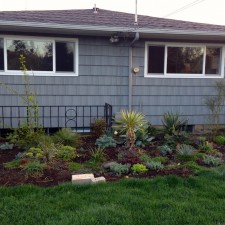 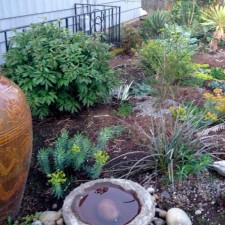 Peony at the rear; so glad I kept it.

Here’s a shot of my test at hand-digging sod to widen the bed by a foot. I’m a very good idea person, but once I figure out something will indeed work, I water-ouzel off to something else.

The Cinclus mexicanus aka American Dipper and Water Ouzel, flits around hither and yon, similar to my project style.

Technically, some of these groundcovers are evergreen, but most don’t look that hot until spring rolls around in earnest.

This Maihuenia poeppigii has tolerated multiple moves. I like it, even though I can never remember the name. To think it up, I have to go through the same gyrations as when trying to recall some actor’s name–you the woman who was in the movie with the guy who later did the thing at the villa with the blue door and Kevin Bacon. You got it, right?

Opuntias are such interesting critters. Some I didn’t realize had hitched a ride from the Alameda garden. I got most of the smaller, hairier guys at a blogger plant exchange–and didn’t record the names. They’re good, though, right? 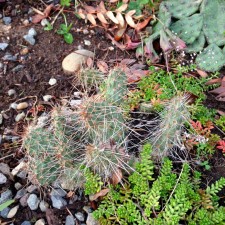 Surprise Opuntia — so glad to see you. 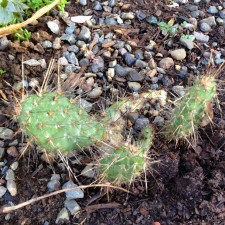 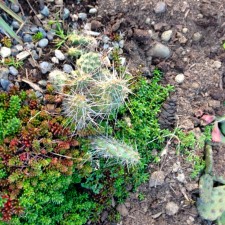 I was wondering if my Tradescantia would over-winter, and it’s coming back. Of course, it was a pretty mild winter. Still, I’m glad to see it.

I so thought I didn’t have anything to say today. Apparently, that was not the case, and since I am loathe to wear out my welcome, I’ll leave you with this: Hesperaloe, my bf heartthrob. I’ve got several throughout the garden, and I’m willing to bet, there are many more to follow.