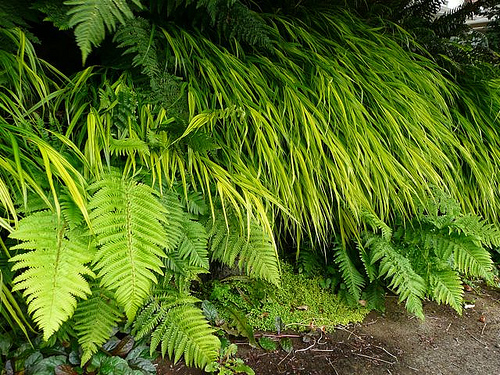 Mass planting has its place, as evidence by the Hakonechloa shown above in my previous garden. People couldn’t resist petting it when they walked past. It was a such successful grouping, mentioned by Ms. Nestmaker way back when. I actually put that together, and then loved it. Isn’t that the greatest thing about gardening? You plant things, and often get even more spectacular results than imagined. It still surprises me no end, the great things plants do.

And then there’s a sea of Juniper at our new house, stretching far and wide along top the lava-rock wall, that plant selection, maybe should have been cause for reflection.

Thusly, I’ve started operation Juniper removal project, a few branches at a time. I know you’re laughing. But I got a couple bids, all in the thousands, so I thought it a worthwhile undertaking. Just think of the improvements I could make with that kind of dough–tell Jabba I don’t have the money with me–the plants I could buy, the compost, the rocks. Pitter patter says my heart. Plus this one-branch-at-a-time business is all I can manage with my current state of shoulder rehab. And besides, it’s an old family tradition. My hummingbird-loving dad, Poppy, was forever cutting yard debris into itty bits to fit it into the bin. (Come to think of it, maybe that’s how he found time away from the thundering herd. He was as only child, yet father to six. My mom was from a big family, so I don’t think she found us quite as alarming.)

So the Juniper caper. I’m still not sure what I’m doing on the removal portion of the program. I thought if I started nibbling the edges, it’d give me an idea of what I’m up against. And I thought I’d strike a trunk of sorts sooner rather than later. Hah. I’ve put in a couples serious sessions, but so far, just piles of dead branch with green foliage at the tips. No trunks in the offing.

Meanwhile, the men are eyeing my efforts with visions of a chain and the rig. I’m fairly sure the wall will come tumbling down upon application of their technique, but Megan suggested that might not be such a bad thing. We could alway rebuild a rock garden with pockets for planting, and as I reflect, might be a better idea—except for the pesky part where it connects to neighbors’ wall. But that’s a worry for another day.

I plan to replace the Juniper with fewer plants, and perhaps a namesake Juniper, say Juniperus procumbens ‘Nana’. I don’t want anything that grows over 3 feet or so, because it would block our view of Mt. St. Helens when she decides to put on a show. (The expression, “the mountains are out,” is common enough around the Pacific Northwest, but I read somewhere that it is not a frequently used phrase in other parts of the country.) The front staggered corner of the wall, is due a blitz by succulents.

Of course, there are many ideal plants to showcase together, and to repeat throughout a garden. Last summer, my husband, Bill, and I visited Vanessa Gardner Nagel’s garden as part of HPSO open gardens. If your’e not member here in PDX, it’s well worth your while. (I’d love to hear about events like this in other cities.) Vanessa’s Carex Circles stopped me in my tracks. Gorgeous, enticing, calming: I couldn’t have loved them more.

I like the Carex Square at Floramagoria too, another HPSO open garden. For more gorgeous takes of Floramagoria, visit these fine blogs: Chickadee Gardens, Sprig to Twig, Piece of Eden, and It’s not work; It’s Gardening:

My sea of mass planted Juniper is kind of cool in its own odd way. But there’s so much of it, and it’s gotten bigger just in the ten months we’ve lived here. Sean Hogan, plantsman extraordinaire, mentioned that it’s becoming more unusual to see Juniper like this—I suppose because the 50s and 60s era of planting is long past. I don’t think he was advocating for it, just making an observation. I’d sure love to an original landscape photo. I bet they were cute little buggers. And maybe it’d be a good reminder to reflect on my cramscaping ways.