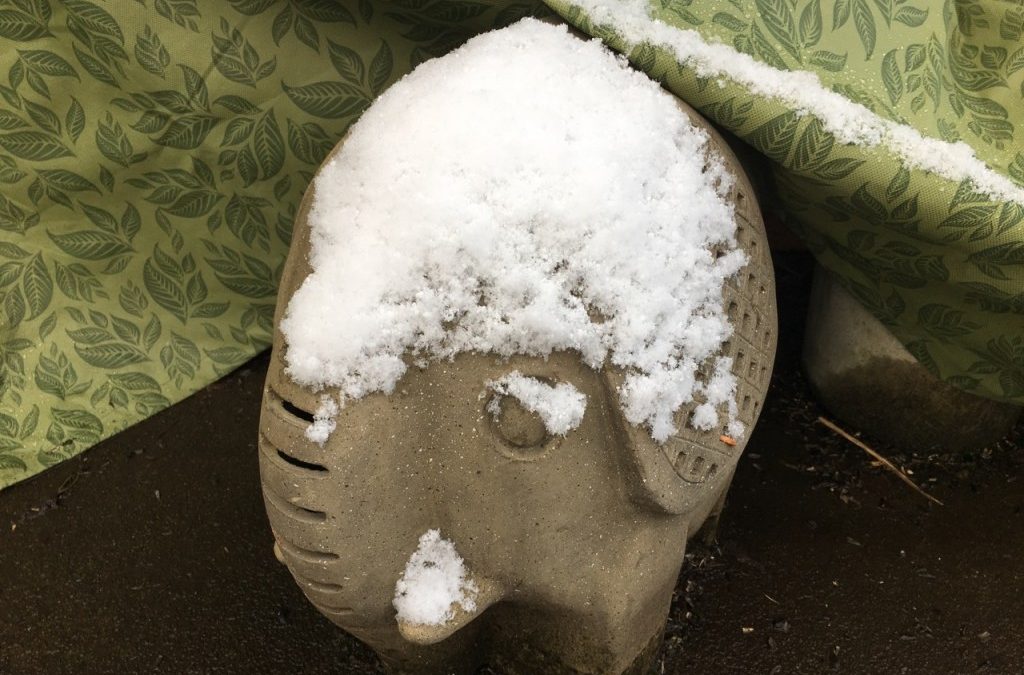 The weather gods must be having a good laugh. Some gardeners in the Pacific Northwest got a little ahead of themselves, imagining it was already spring. Guilty. I came darn close to digging and dividing a few plants. Let’s hear it for procrastination.

Around these parts, we tend to think it will be just a dusting. Meanwhile, at least some Oregonian are rooting for real snow. (Well, at least me and my kids.) Gardeners from colder climes, not so much. I still love our gardening community–even if they begrudge us a little sparkly snowfall. I think we can all agree on trying to keep our plants safe. Though I’m not real strong in that department.

By evening the first day, it’d turned out to be more than a dusting. This is getting into exciting territory–at least until it becomes a pain in the neck and the town is crippled. Oregonians aren’t known for a keen ability to navigate in snow. The city strives to maintain arterials, but we don’t get enough to warrant the expense of citywide snow removal. (We’d have to have entirely different spending priorities–in so many ways.

But that’s a horse of a different color. Right?)

We started worrying about starving to death after the first few flakes, so we made soup.

The snow pretty much melted the second day, like it typically does. But forecasters warned of more snow and also dire cold. The Facebook community was atwitter. Will it or won’t it. Prognosticators had all sorts of ideas. Swirling patterns bringing moisture in from the Pacific, wind flow from the north, no south, or maybe it was the east. There was also mention of a BC slider–a condition wherein cold wends its way down the coast from Canada. I’d never heard that one before.

Then I looked out the window for a better idea, and the sky told me, yep, more snow.

On a clear day, Mt. St. Helens is visible between the big tree and the telephone pole. It’s a pretty good vantage for predicting weather–within reason. The tree-covered ridge in the distance above is the Washington side of the Columbia River, some two miles from our house. We get a little more “Gorge affect” that a most of Portland. I’d attempt to learn more about it, but it gets complicated fast. I did understand this line from an article in the Oregonian.

High pressure (east of Portland) seeks low pressure (usually offshore), and the winds howl through the gorge. Think of it as a ball rolling down a hill, or water being compressed through a hose: the narrower the hose, the stronger the wind.

So, the snow had indeed returned after the first melt.

I’m so happy when Chiquita is outside checking snowfall. Otherwise, there’s a lot of mind-control going on–which helps explain the disjointed nature of this post. I’ve fallen in love with this dog, but her constant razzle-dazzle can make it challenging to think. Rumor has it, she’ll improve once she gets beyond teenage status.

Bill and I have developed a new system for eating dinner on the sofa–with the humans inside the cage, and the animals out. And complaining the whole while. But dagnabit, there’s constant breaking news to be watched! And we need to huddle in the room near the fire. (Manual gas logs. They warn you that they don’t heat. But it isn’t true. They get the room nice & toasty.)

(And if I might add another aside, we lost power for about 90 seconds yesterday. As far as our preparedness for disaster: not at all. I’m wondering if this is another argument for solar power? Or does it work that way? Dear dog, what I don’t know is a lot.)

Outside, the weather was doing its thing. Pretty.

The snow is gone from the streets now, and most of it from the south side of the house. The north garden is still snowed in. Those temperatures got down there last night, 24 °F when I got up. My poor little Echiums are probably toast. They self-seeded, so I’m okay with losing them. Fun while they lasted. There’s talk of more snow in the next few days, but I think we’re almost done.

At this point, there’s nothing to do but wait it out. I know that many of you deal with extreme weather all the time. We’re novices out this way, and kind of silly–except for those of us who are not. But with the wild swings in weather all over the country–if not the world, apparently we’ll have opportunity aplenty a to learn new coping skills.

Sincere apologies to our fabulous contributing nurseries–for doing the snow dance if it’s working against you. May all your plants survive unscathed.