gardens NOT in process: do such things exist? 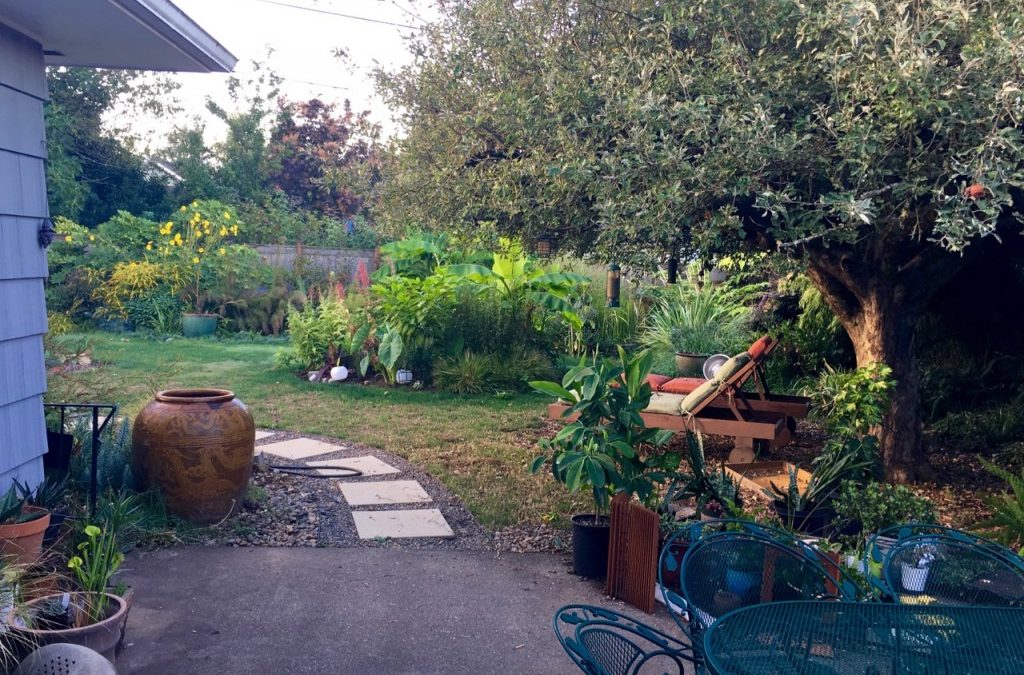 Okay. I understand the concept of continued maintenance. But dear lord, am I ever going to look out there and not see a mess? Is it like that for everyone? Or is this my particular mental health issue? Our youngest kid had a birthday in July. We celebrated at a favorite haunt, Santa Fe Taqueria on NW 23rd in Portland. Yes, that’s an Oregon Weedery sign in the background. Across the street the other direction, the perpetual line at Salt & Straw Ice Creamery.

At any rate, our good friends and former neighbors, Missy, Tami, and Cayton–asked about our garden. 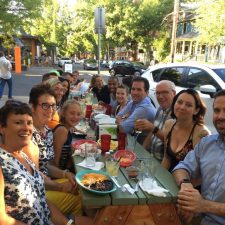 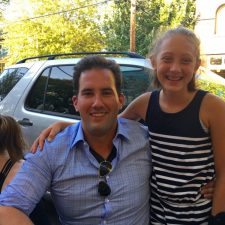 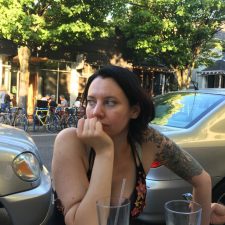 Megan, a rare moment of not working on plant lust– but thinking about it.

I gave my typical shoulder shrug, it’s-a-mess response. And Megan said, what are you talking about? Your garden looks great. Seriously? When I look out there, I’m reminded of my childhood neighbor, Mr. Daly, on our scary parish pastor. “Father Aggler looks out there, all he sees is a bunch of cabbage heads.” I think I’ve told you this a few times before, but it’s so useful, I can’t resist. Mr. Daly was the best, famous for breaking into a Mick Jagger routine. Kids found him hilarious.

I have to admit, there are a few features in the garden I quite love. For instance, the round bed, which I’ve also mentioned ad nauseum. I can’t help it. I got the idea from the lovely and talented Vanessa Gardner Nagel. We’d talked about something in the back corner, but I ended up placing it in the direct sightline from the patio doors. 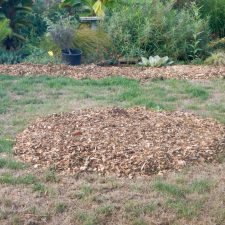 Extra mulch goes in a circle. 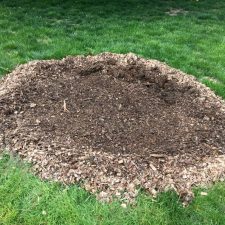 Extra compost gets tossed on top. 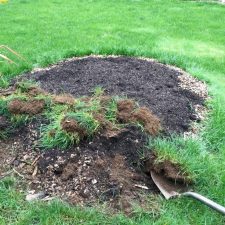 That won’t be big enough.

Accidental placement, and I still pinch myself over how perfectly it’s situated. In fact, the whole thing was was dumb luck. I don’t like to overcommit. So I toe my way in. Until it’s too late to turn back. There must be gardening angels nudging us along the path of satisfying design. (The picture atop this post is the sightline from our patio door.)

Last year’s Brugmansias were so prolific. I had two, and they went wild.

My one plant this year has been downright stingy on the bloom production front. Really, only one flush.

I’ll still take it. Don’t get me wrong. But come on.

Another unanticipated benefit of this round bed, has the been freedom to plant whatever I fancy. It’s a bed I water regularly, so that allows for casting caution to the wind. And before this, I didn’t even realize I was placing restrictions on myself about what I could and couldn’t do. Ay ay ay. The “rules” I impose on myself. What’s up with that? Besides my little Irish Catholic girl upbringing–heavily weighted on the deprivation side of the scale. In fairness, I met a terrific nun when I was 33, and she suggested I do things to evoke joy–because its life-affirming. Say what!? But that’s a horse of another color.

Back to gardening: My latest respray idea, more wild areas–particularly in the east fence garden. I never thought I’d come to this.

Below, the partially dismantled East Fence Garden. I’ve never decided exactly what I wanted to there, thought I been threatening to straighten that pot for the longest time. Those things are heavy.

The notion of an orderly bed was before my grand puppy Pokey scared up a quail, where upon Pokey’s dad, Justin, promptly named him “Dan.”  I live in the city with a fenced backyard, and there’s a quail in my garden. That’s ridiculous.

Happy making for sure. Of course, this means Pokey will need closer supervision. No chasing and scaring the quails allowed!

Side note: I texted my neighbor across the street and asked if he had quails. He, of course, said yes. I told my husband, and he said–if we told Steve we have a kangaroo in our back yard, he’d say, “I have two!” That guy. Always a step ahead.

Back to storyline, the wildlife/quail siting episode also seems another argument for adding a pond. I’m leaning toward using a 6′ galvanized stock tank. Now, where did that idea come from, she wonders, tapping finger to cheek.

You have to admit, this is well executed. And now that they’ve had it going for a while, I’m sure they’ll share the dos and don’ts. Because they’re nice people, as gardeners are wont to be. Except for the ones that aren’t.

So, let us know how things are evolving in your garden. And if there’s anyone out there with a garden that’s “done,” we want to hear about that too. With pictures.