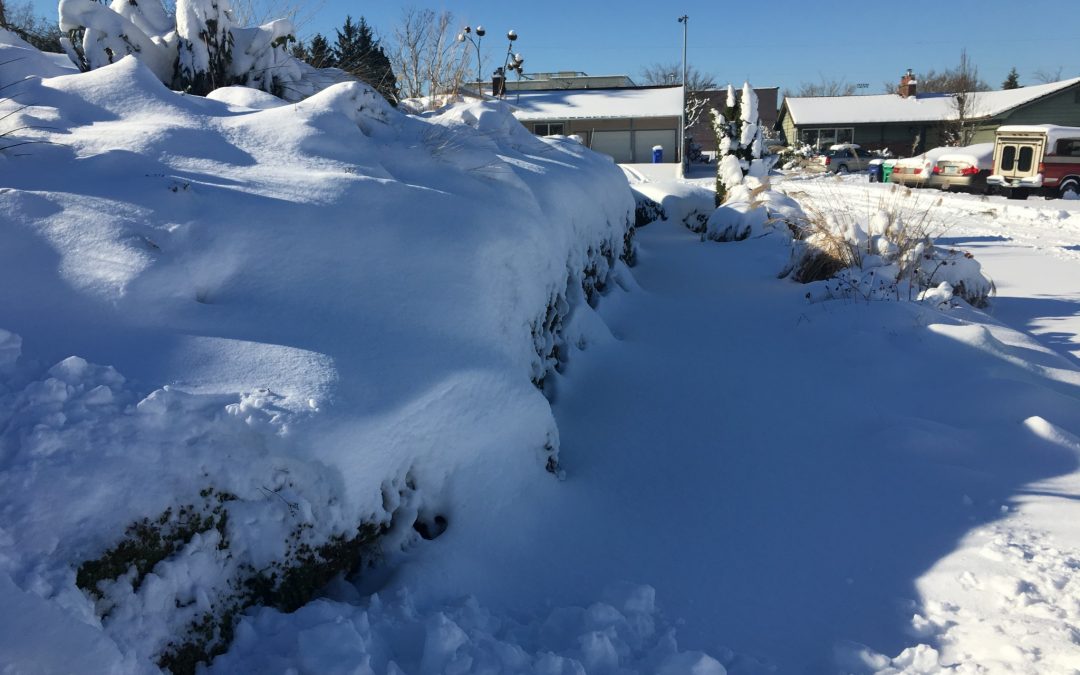 You may have heard that we got an unusual bit of snow here in the Pacific Northwest. This is a rare event, and many of us have no idea what to expect in the aftermath. There are a couple opinion camps on snow itself. Those who abhor it–they’ve often moved here from snowier climes. And those who love it–generally natives who have suffered a lifetime of snow deprivation.

Is it odd that I find consolation in having done so little to protect my plants? Do other gardeners do this? Oh, sure, I piled leaves around a few of the most vulnerable–and after the initial cold forecast–but before the snow, I tossed frost cloths over a three luscious looking Echiums.

This time, I even took an extra step of weighting the bottom with bricks.

I suppose this could have helped if it had only been a night or two of frost. Right?

When it comes to garden prep for winter, I follow a regular regime. Step 1, Denial: it’s probably going to be a zone 9 winter. Step 2, after a few cool nights with warning weather forecasts, I move several potted plants to the basement. Step 3, I wait until it’s really cold and the wind is howling, then I wring my hands and pull my own tail for a bit. Step 4, I dig out frost cloths, and then when I manage to get them outdoors, fail to secure them adequately–because my teeth are chattering to the rhythm of the wind. I know: I’m a big baby–just like Johnny Cammareri.

Plus, usually when “they” predict snow around these parts, it’s a big disappointment, especially for those like Megan & me, who keep our noses pressed to window: Lucy and the football, over and over again. This time, though, we got clobbered–at least by our standards. They predicted snow, and snow happened. But they claimed 2 or 3 inches, and we got 12. My dad always said you can’t really blame them because it doesn’t happen here often, and there are so many factors–the Pacific Ocean, Alaska, the Columbia River Gorge, high pressure aloft. Haha, I’m just kidding about the high pressure aloft. I don’t know what that means, but they do say things like that.

So like every self-respecting-awed-by-snow person, I took pictures of the increasing depth. And where better to showcase the change than on the patio table.

Mind you, we’d have been happy with this much snow: it would have been a lot for us.

It was so easy to see from that vantage, and dang surprising. Meanwhile out front, it was weathering heavily as well. And the wind was blowing. It was a regular storm, exciting–and kind of scary. I lay away that night thinking it would be a terrible time for the “Big One”, aka the huge earthquake they keep promising. Catastrophize much? Why, yes I do. Am I alone?

Below is the same scene in the morning. Here I was thinking the birds could use the old Xmas tree for shelter. And what about the new pavers under there? Will they be okay–or will they come out all catawampus?

Of course, everything looks hopeless out there, but please note my famous Pennisetum macrourum aka African Feather Grass. It held up nicely to provide shelter for the birdies. I was so happy when I saw that. So to reiterate: it’s a terrific plant that never stops performing.

And in the morning, a final circle back round to the patio table measuring stick. There was even more snow.

Apparently, we all thought taking photos of our patio tables was a terrific way to demonstrate the accumulating snowfall, because one weather dude requested that we stop sending in our stupid patio table pictures. Well excuse us. We’re inexperienced on this front.

So if you will indulge me–and perchance offer a word of encouragement for freaking-out gardeners–here a few more snow shots.

Some gardening friends on Facebook recommended unburdening delicate plants of their snow burden. Others said, NO! do not shake–you’ll break the branches. But I couldn’t leave this little tree to fend for itself, once I got to thinking about it, and so I delicately shook the trunk to lessen its load.

It seemed better afterward, and there was no damage to report. I love this little tree and it would break my heart if I lost it.

A little later, I couldn’t resist asking Bill to smack around the prostrate bamboo. He was outside anyway, filling bird feeders for the umpteenth time.

Of course, he is a man, so he did not wear a coat even though it was 20 °F. But I give him extra credit for wearing boots instead of slippers. (This is in no way meant to diminish the fact that I so appreciate his willingness to do it.)

I sincerely hope this does not come across as a ho-hum, what-else-is-new post. But this kind of weather doesn’t happen here, and we know not what it forebodes. Except maybe Paul Bonine a chief proprietors at Xera Plants–not to mention a revered weather prognosticator ’round these parts. Last I heard, Paul was curled up with his dogs, savoring the cocoa he’d managed to snag at the store–last one on the shelf.

I’m interested to see what happens, what survives and what does not. I’m sure my Echiums are toast, and likely the Phormiums. Probably a lot of other plants too. But for right now, I’m in awe, and shock, and I can barelyi remember what was out there–since everything is flattened to the ground under the snow load.

Bill and I walked to the grocery store today, because the larder was about caput. We passed by Mcmenamins Kennedy School, and I espied their Loquat looking tall and terrific. I’ve got one in my garden too. But so far, I haven’t had the nerve to look.