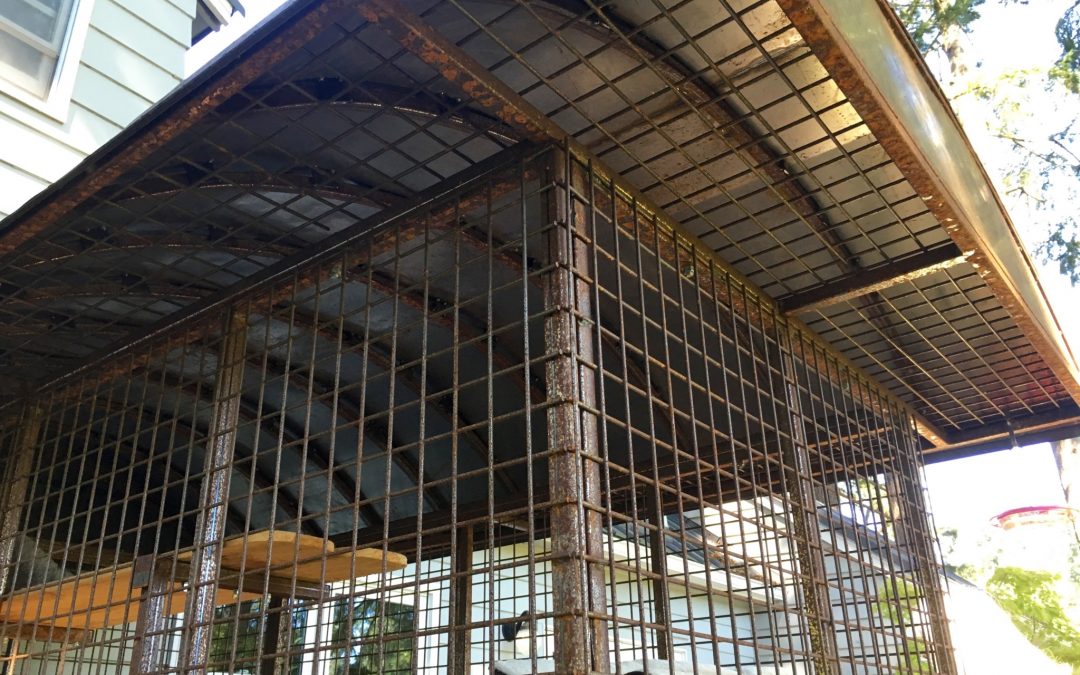 I’ve always want to go on the annual Catio Tour here in PDX, but something always comes up. Like I don’t get a ticket. My friend Cathi is not like me. So this year, when I blah blah blahed about wanting to go, Cathi sprang into action and signed us up.

I’m going to cut to the chase and show you the one that really moved me. Probably in no small part to the fact that the garden was also awesome. In fact, I kept forgetting that I wasn’t actually at an open garden. Plus I have to admit to being a little perturbed by the pesky reporter from Oregon Public Radio doing a story with the owner about the Catio tour. I’m no stinkin’ monument to justice: I wanted to ask the owner about her garden, you know, and get some plant info.

I suppose I should show you the Catio, an outdoor enclosure to give kitties the experiencing of being in nature–while thwarting their evil bird-catching ways. I think it’s a terrific idea, but not everyone has a family member so skilled as to be able to make this fancy dancy digs from recycled steel. Call me envious.

It’s kind of reminiscent of a old caravan, the kind you see in British cozies, e.g. Midsommer Murders, Blood Will Out.

The owner’s brother built this enclosure from reclaimed materials, and clearly knows what he’s doing. I was hoping to get his name–and see if I could claim some sort of kinship. Alas, no name was forthcoming.

You may remember, we have two cats, Mister and Posy Etta James, and so far–they live strictly indoors, much to their chagrin. But it hardly seems fair to lure birds to your yard with plants and feeders, only to have them stalked by two allegedly domesticated cats. I can tell you this, they’re bad ass hunters from the inside of the window screen.

Can you imagine how tough these guys would be if they were outdoors and could feel the wind ruffling their fair hair? Um hmm. This is what I’m saying.

So the garden. No wonder the owners want to sit outside with their beloved pets. It’s enchanting. There was a school ball field right behind their yard, but if it hadn’t been a game day, I might not have noticed. Beautifully planted with layered screening. And then I saw this.

Does anyone know this one? I’m guessing a H. aspera of some sort? I really MUST have this plant. So fabulous. And here I thought I didn’t really like Hydrangeas. Never say never.

Honestly, I’m surprised peeps weren’t lying around on the ground having swooned under it’s mesmerizing effect.

And there was also mass planted Hakonechloa, a plant that every garden needs, in multiples–and then some.

I keep buying more Hakonechloa aka Japanese Forest Grass, which is ridiculous–considering I always have it and can easily divide. But I can never bring myself to disturbed it–because it’s so gorgeous, the more mass the better. That’s crazy, isn’t it. Though I do have the one little out when I buy anew: It’s a different variety. Hah!

And the ferns, oh my. I keep saying I’m going to up my game on ferns. I’ve currently got fern books strewn about the coffee table, but boy, do I have still a lot to learn. At least I know enough to recognize fabulous when I see it.

I don’t generally fall for bottle edging, but this was beautifully implemented.

And how about use of this baker’s rack on the patio–a good place to keep plant pets, especially with the graduated shelving. Smart.

So many things I fell for that I don’t ordinarily like–for instances, faces on planters. But how’s this for grooviness personified?

The archway shown with my friend Cathi above was constructed catio engineer as well. I think it’s kind of fascinating how a skeletal form can define space. Put this one in the love column.

And just because the Hydrangea is so fabulous, a parting shot.