one thing leads to another — part II 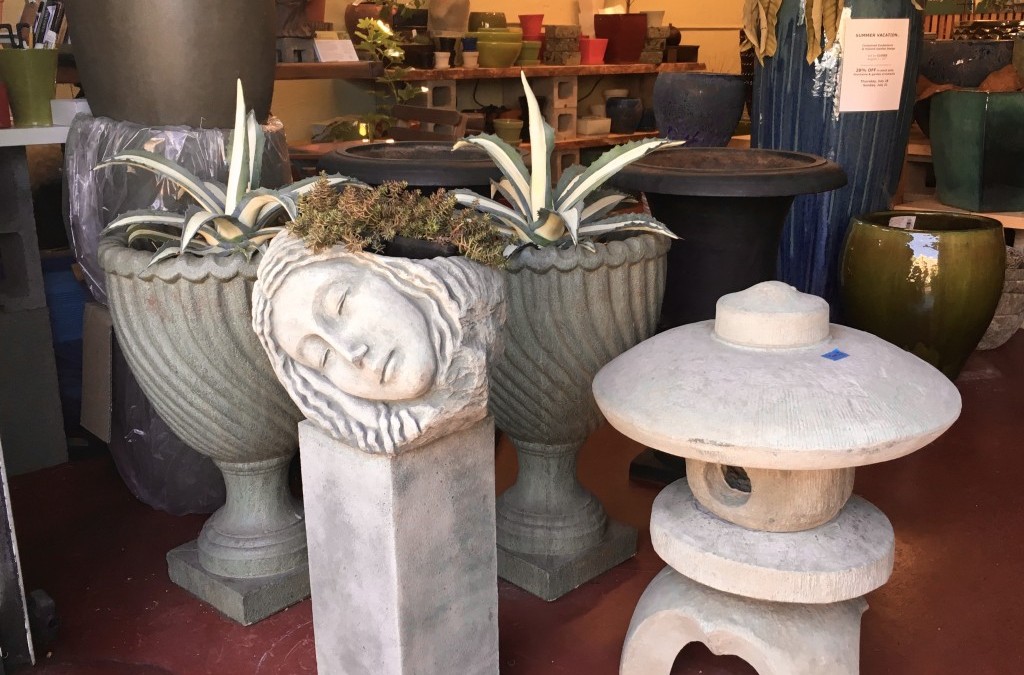 Remember last week when I said this week I’d continue with part II. Well, I’m to hell and gone from Cartagena. We’d been waiting on our contractor for a patio project, then suddenly the crew touched down. They’re making terrific progress, and we love it. (More on that later.)

But as anyone knows who has had construction going on, it’s a tad trying to “stay on target.” My son Elliot repeats that to me like mantra whenever he accompanies me to Costco. He claims I have a tendency to wander off and lose focus. Hah, he should have seen me around here this week. But now, I’m doing my level best to get back to the topic that I claimed I would write about.

It all started with a workshop at Bob Hyland’s Contained Exuberance shop in Portland, OR (wherein I learned something new, because workshops are good for that.) There were so many fabulous pots to choose from; that alone was enough to set my eyes spinning. And that was without even considering the complicated math problem of incorporating into my collection of pots at home.

Yesterday I was back by the shop, and things had been rearranged. The photo atop the post features a new display. I wasn’t sure about the face pot before, but on the pedestal, I think it’s terrific. How do you feel about faces in the garden? I say no, generally speaking, but once in a while…

I also like this new look in the shop, with pots arranged to invoke thoughts of a flowing creek–complete with fountainhead.

Meanwhile, it got me thinking about all the pots I have already. It’s been so long since I bought many of them, I don’t remember what I planted initially–just that I fell in love first, and though about plantings later.

I’ve had most of my planters for at least ten years, and they’ve seen so many incarnations–Miscanthus, Ashe Magnolia, Ensete, Papyrus, Alocasia, Colocasia, Magnolia–you name it. I’ve generally been happy with their past lives. However, I am still kicking myself for failing to overwinter my Red Banana. It’s so easy. Yank, shake dirt, throw in a bag in the basement. How hard is that? I managed to pull it off for 3 or 4 years in a row, and then this year–not so much. I can’t look at the blue pot it lived in without feeling the loss.

I don’t have the Musa acuminata ssp. zebrina anymore either–but I wish I did. Maybe I’ll find one on super sale soon, and then I’ll be able justify buying so late in the season because IT’S SUCH A BARGAIN.

The thing is, I’ve yet to make peace with them at our mid-century ranch. But dang, they were an investment, and sure, if I had money to burn, I’d pass them along and splurge anew. Alas, this is not the case.

A friend recently bought a pot for a Full Moon Maple that I  encouraged her to buy. She’d seen a pot she loved at a local shop, Garden Fever, but it was “too expensive.” Plus she wanted a blue pot. Well, sure enough, she got the blue pot and planted up her maple. And then the next time I was over, the too-expensive pot had joined the club. I guess we’ll count that as a split decision.

Most recently, I decided to give vegetable gardening a try, and so I re-employed my misfits into a makeshift potager. I built a temporary bed where they’d get full sun–thinking I’d expand the spot later and plant a second round bed.

Talk about veggie garden fail. I know peeps say it can’t happen, but here I am to prove it can in living technicolor. (By the way, I keep meaning to take my paint fan deck out and match the orange hand truck color. Isn’t that a great color in the garden. It super pops. I’m happy just seeing it hand around out there.)

Here’s the first round bed. I haven’t defined edges yet, but it’s coming along. Pathways are coming to the back yard next week, so I should probably get that planned.

I guess the reality is, I never strive to be “done” anyway. I love pondering and moving plants and pots–and once in a while, remembering to just sit and enjoy it. I wonder how many gardeners really love the process as much as doneness? Sure, I love a pulled together garden as much as the next guy, buy chances are, mine will always be in transition. I don’t have any inclination to be done done.

I do always manage to pot up Cyperus papyrus in a skinny tall pot I bought for just that purpose. It’s the only time I’ve ever gone specific. And my Papyrus still wows me every year.

It starts from a a little plant like this, and grows to a six or eight foot giant in just few of months.

Last year’s patio pots above included the Red Banana. This year’s patio pot does not. Woe is me. Though I do have a hardy banana growing in the ground beside the patio, and that’s not too shabby a backdrop.

For now, I’m making an effort to repurpose my pots in a way that makes sense. I’m not quite there yet. But with so many plants–and maybe one new pot this year–I’m sure I’ll hit on a happy solution.