Echium wildpretii, a tale of survival 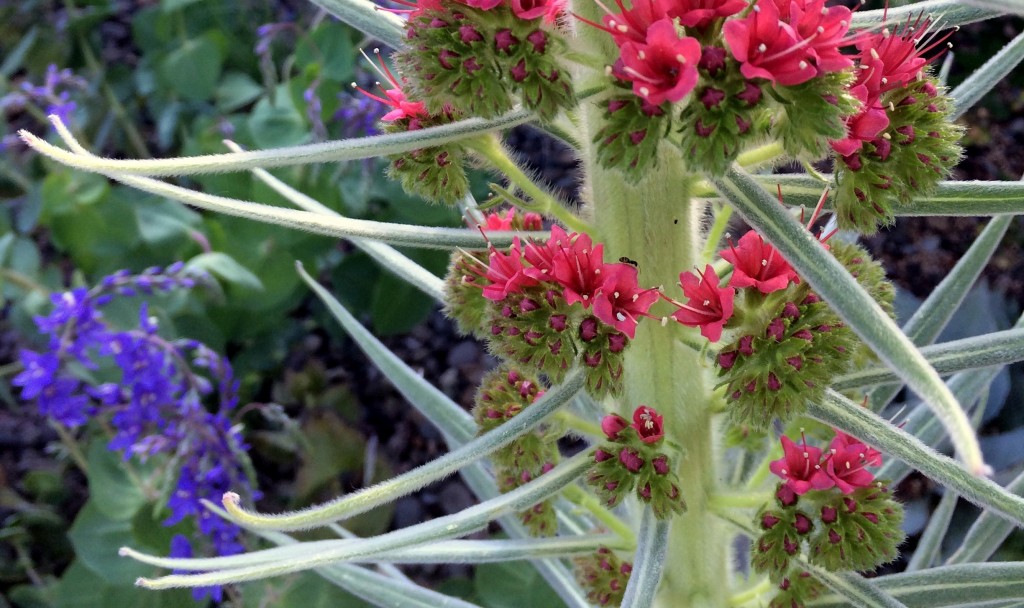 There was a rescue operation, on a hot and miserable morning back in August of 2014. I’d taken a walk past Patricia’s old garden and spotted a new crop of Echium wildpretii seedlings. Knowing the new owners were planning on a clean sweep (out with the plants, in with the lawn) Patricia and I were there early the next day to dig.

This is what we were after…a second crop of seedlings from a plant that bloomed in 2012. Extraordinary plants that had survived a hot summer with no water and an application of herbicide. 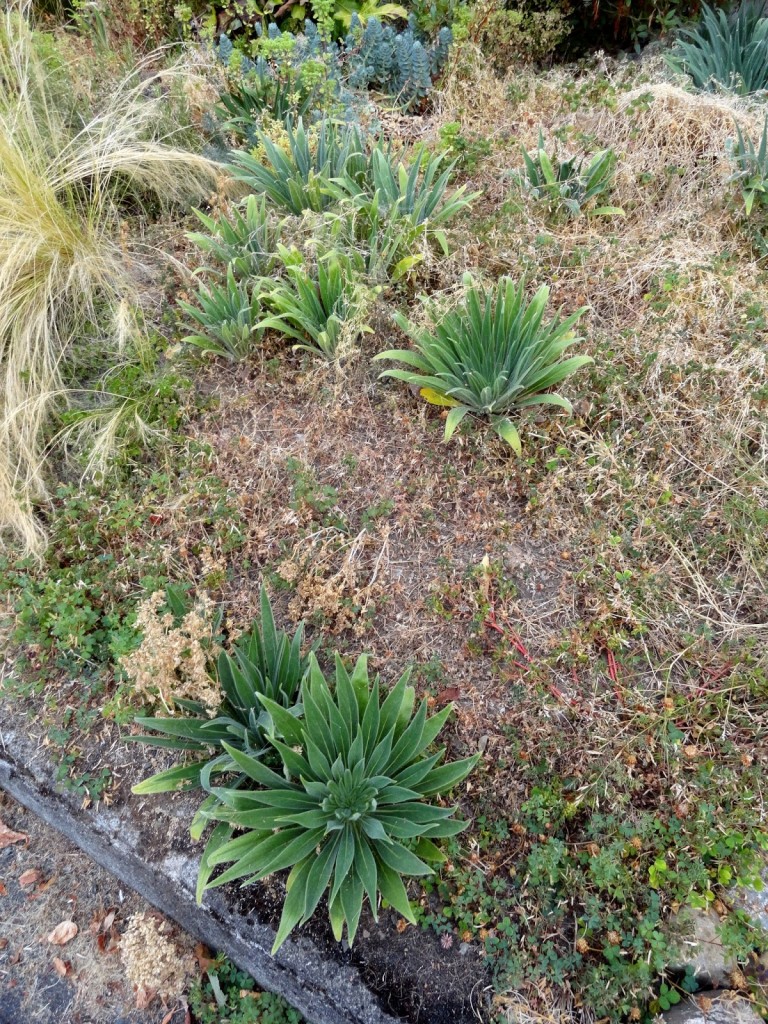 Below was the first crop, pictured the summer before, when the garden was still Patricia’s. These all died off the winter of 2013/14 (or so I believe). Don’t they look magical when grouped the way nature does it? 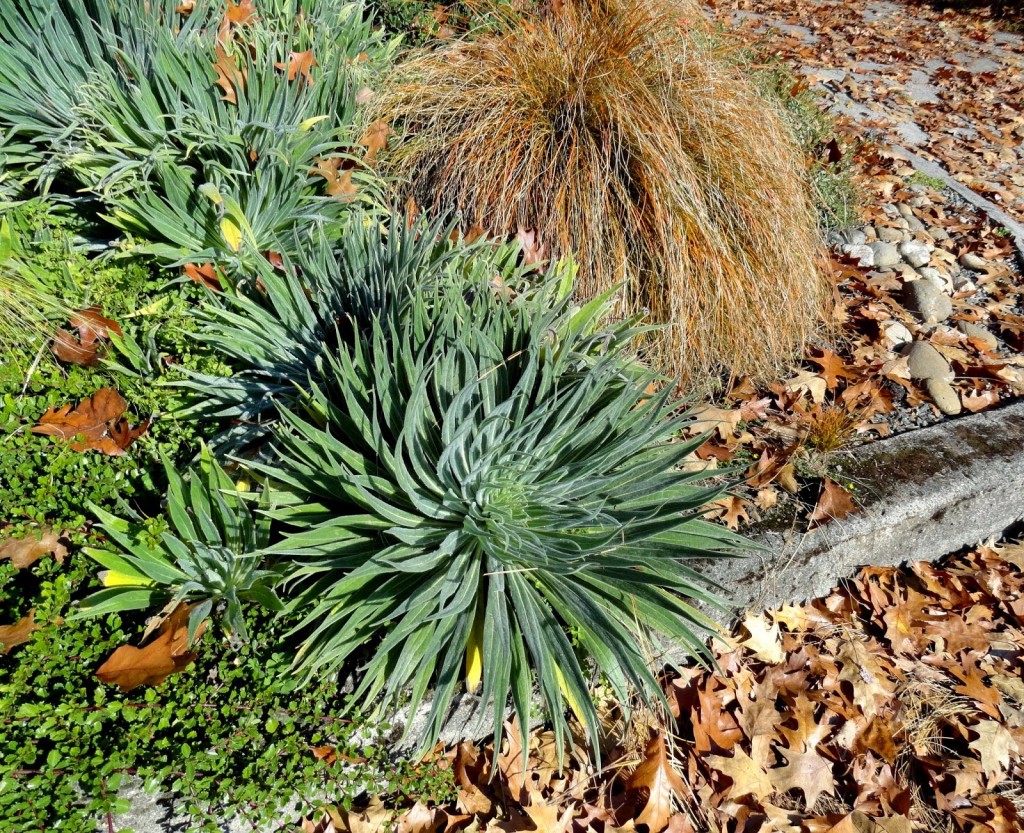 Home after the dig, my new babies were safely ticked into their intensive care unit. The ground we had to dig in was rock hard, and even though we watered before we dug I still was only able to get the tap root. All the other roots broke off and stayed in the soil. I had little hope for these making it. 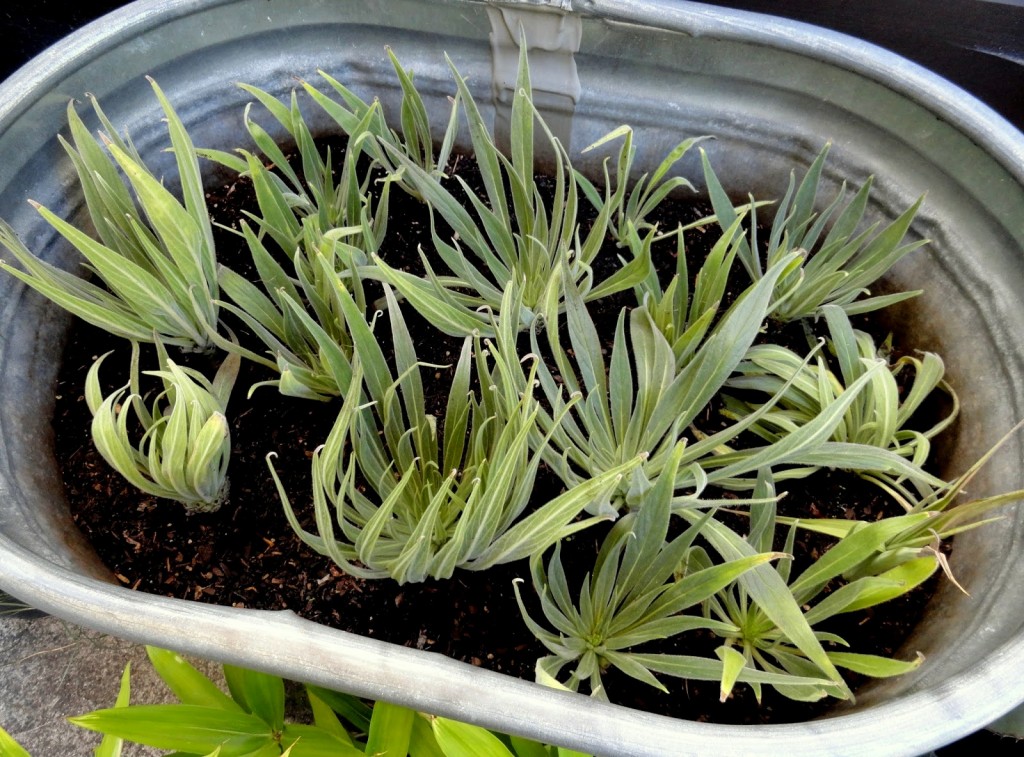 But this is a tale of survival! Seven of them lived on to be planted out in my garden the following spring. Being their second year (they’re typically biennial) I thought that meant flowers that summer (2015), but it was not to be. Which meant they had to get through winter in the ground, being USDA Zone 9 plants that’s a risky proposition here in Zone 8. 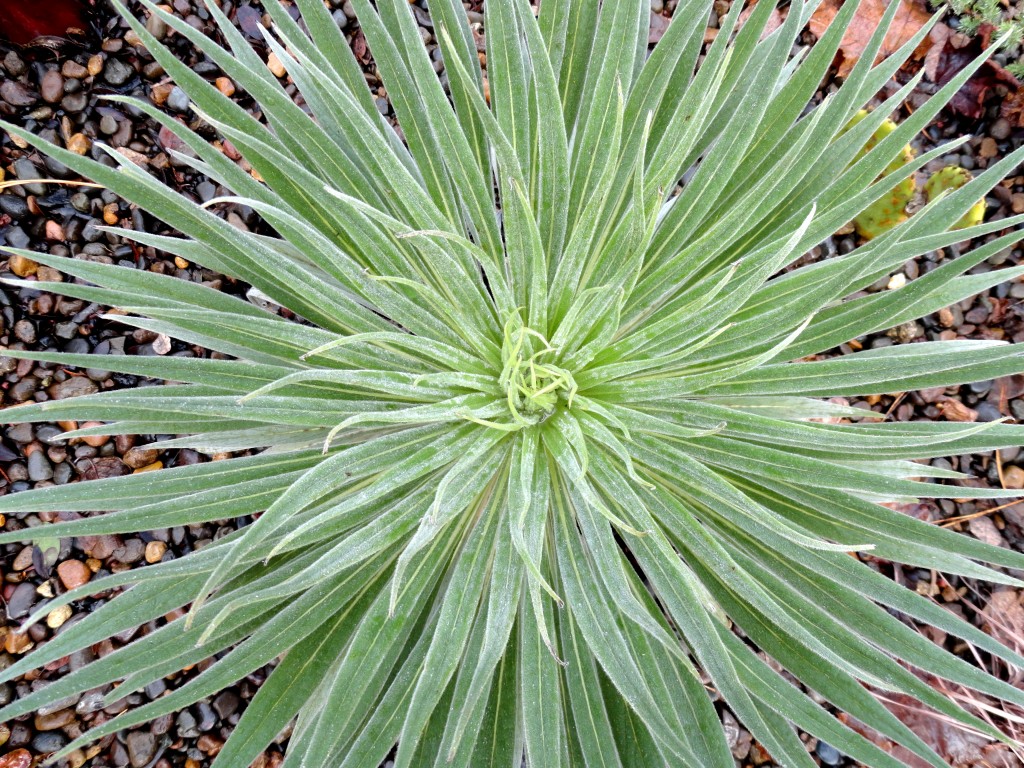 Especially when this happens. 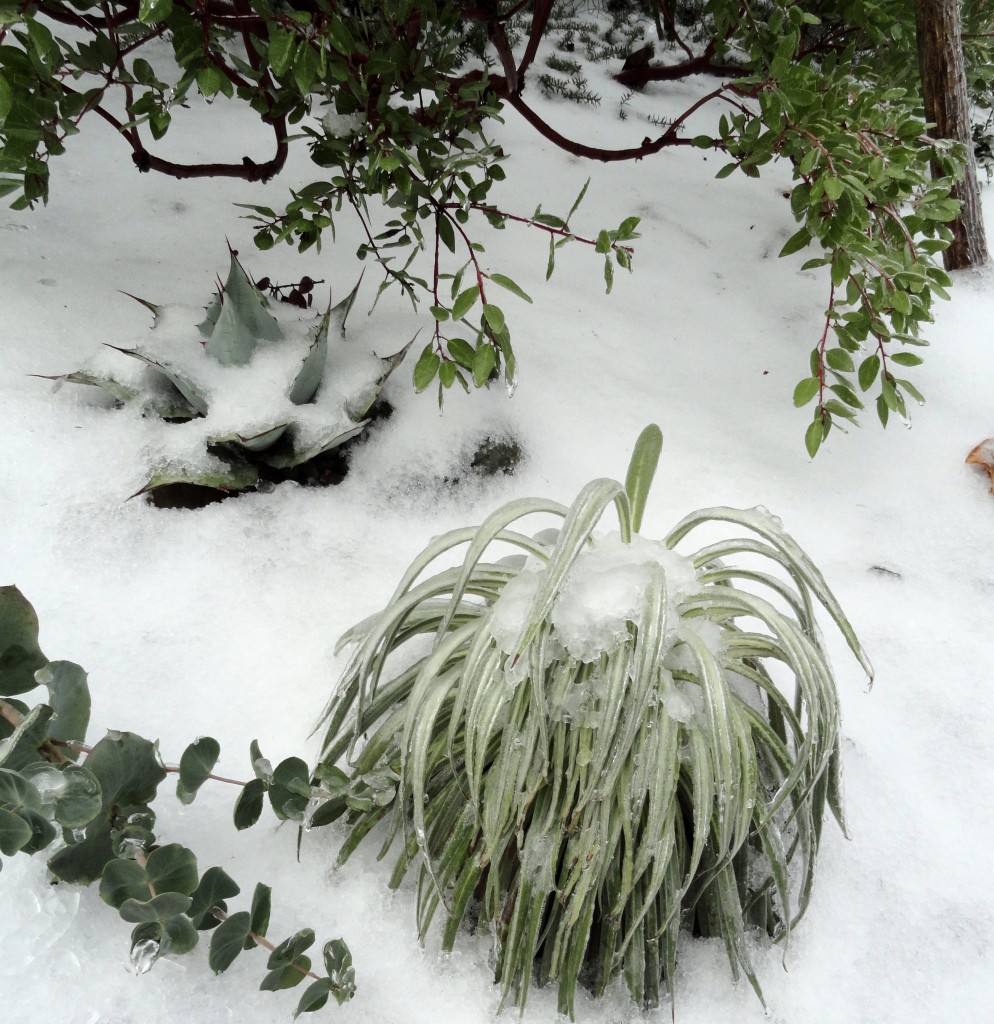 But…they’re survivors! Four of those original plants made it through winter and in April three of them started to do this… 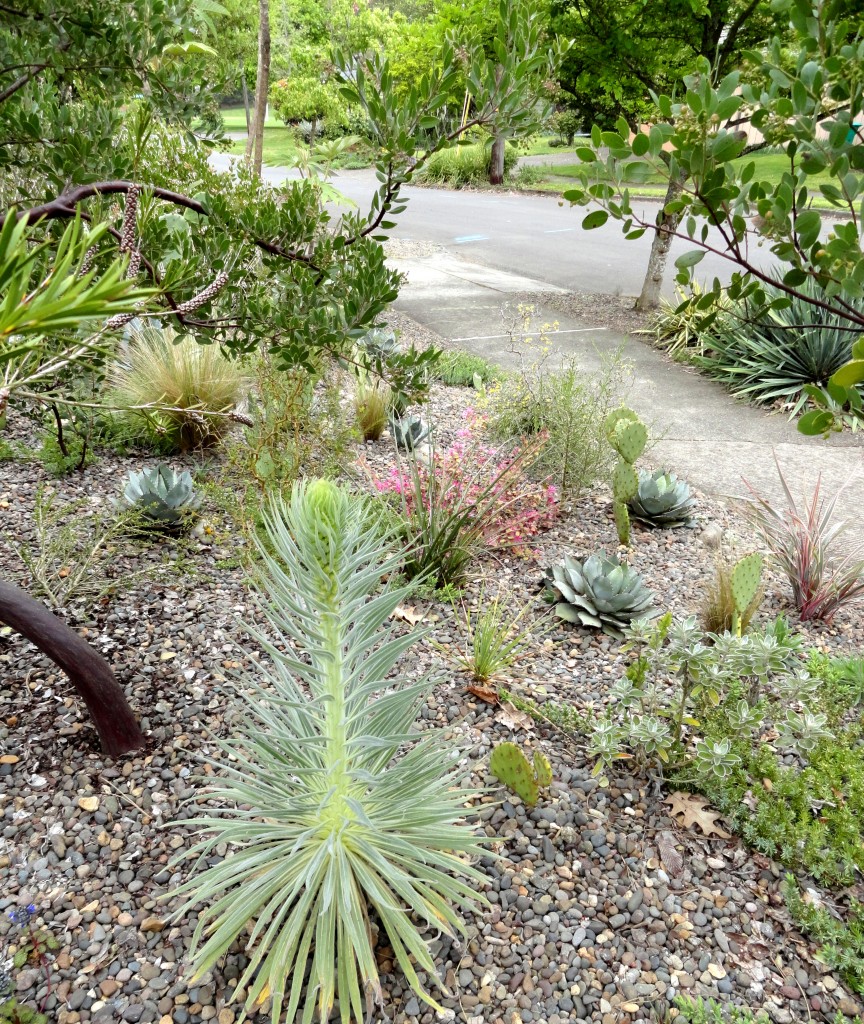 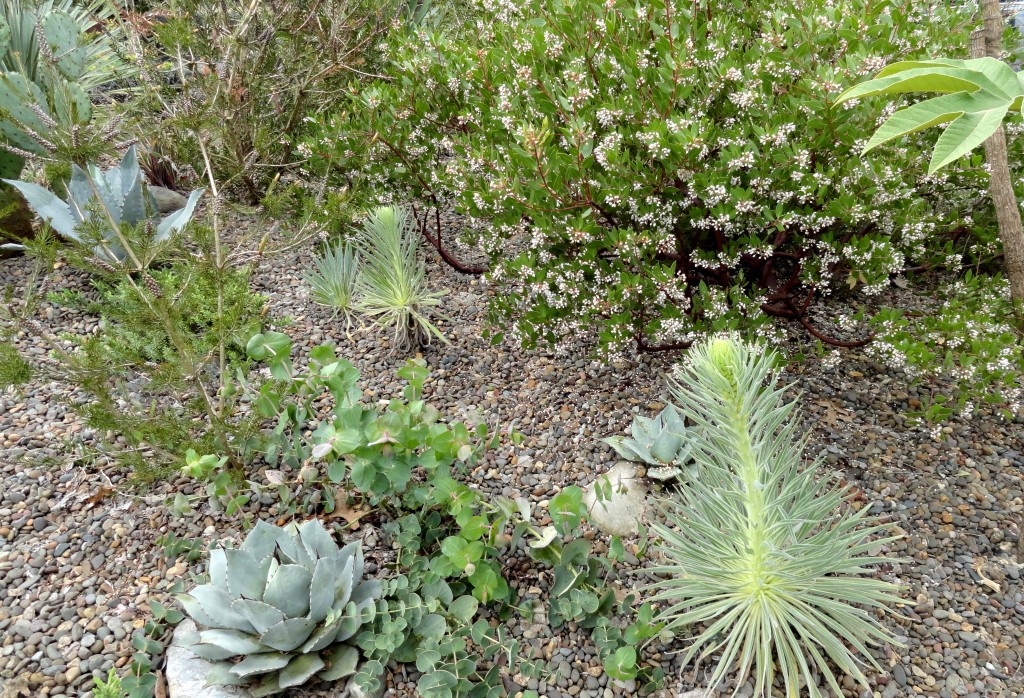 The little bloom nubbins were starting to show. 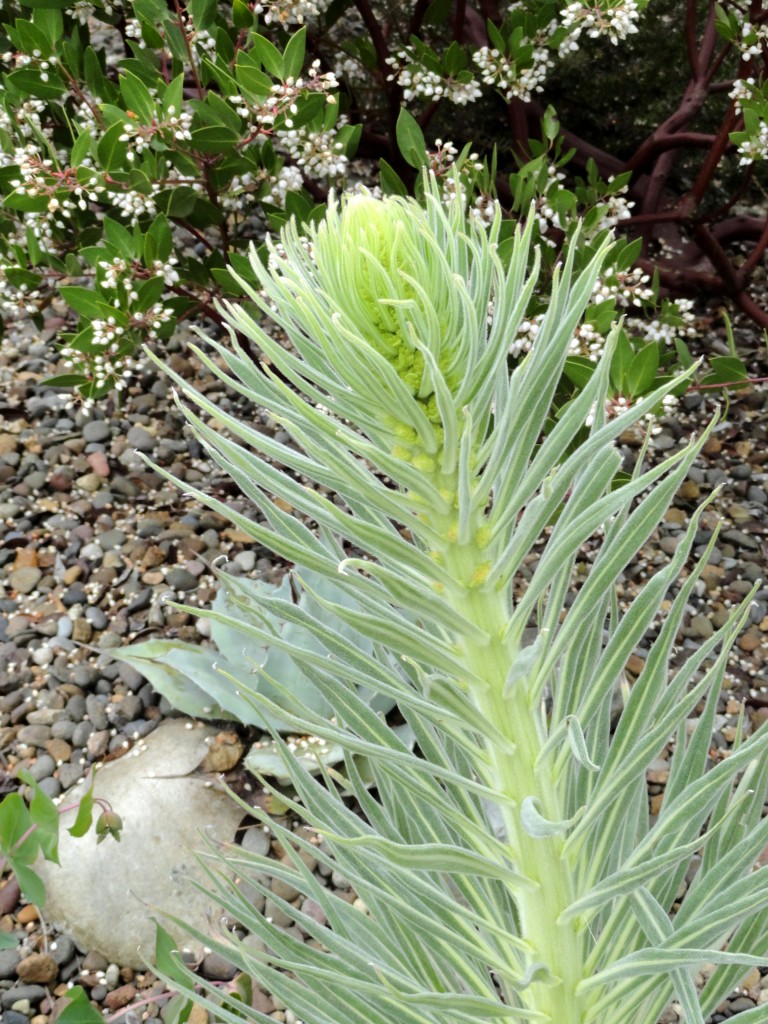 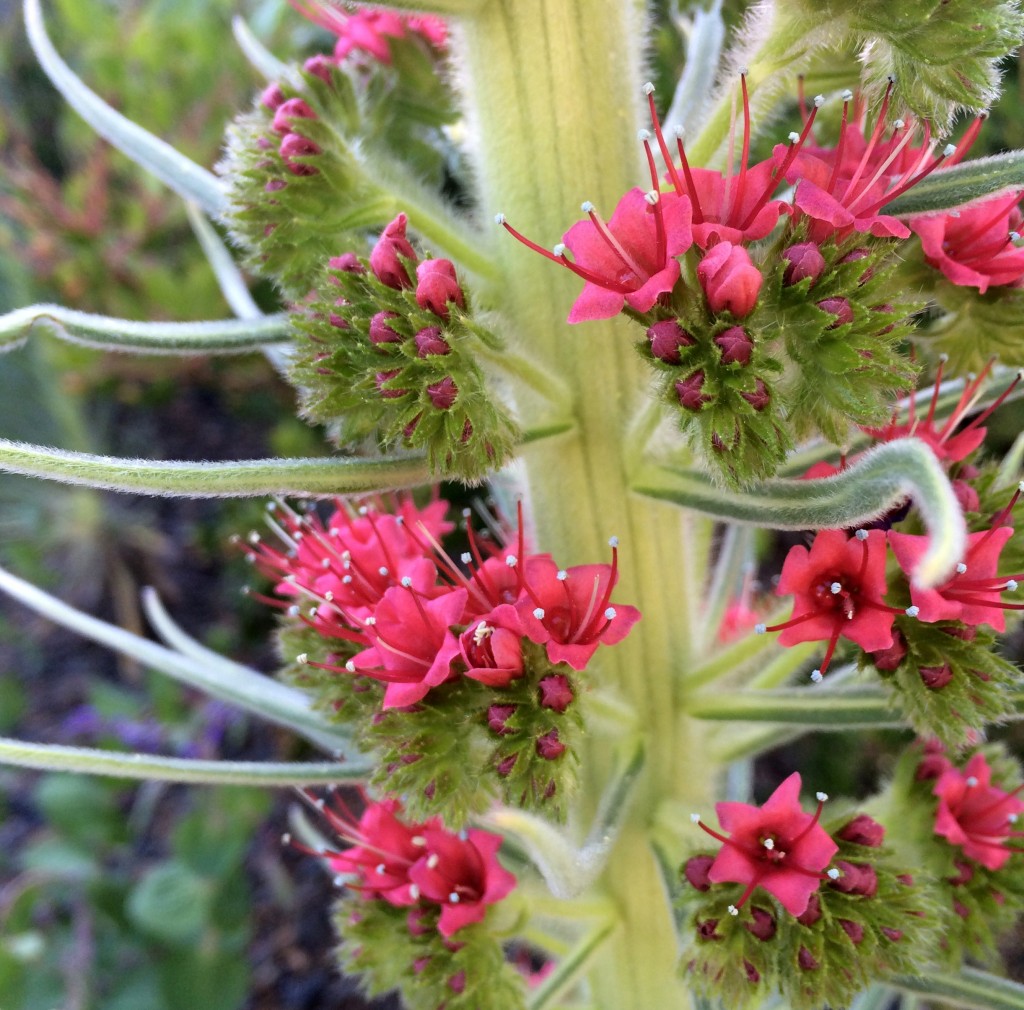 As they dry the flowers turn blue, it’s a nice mix. 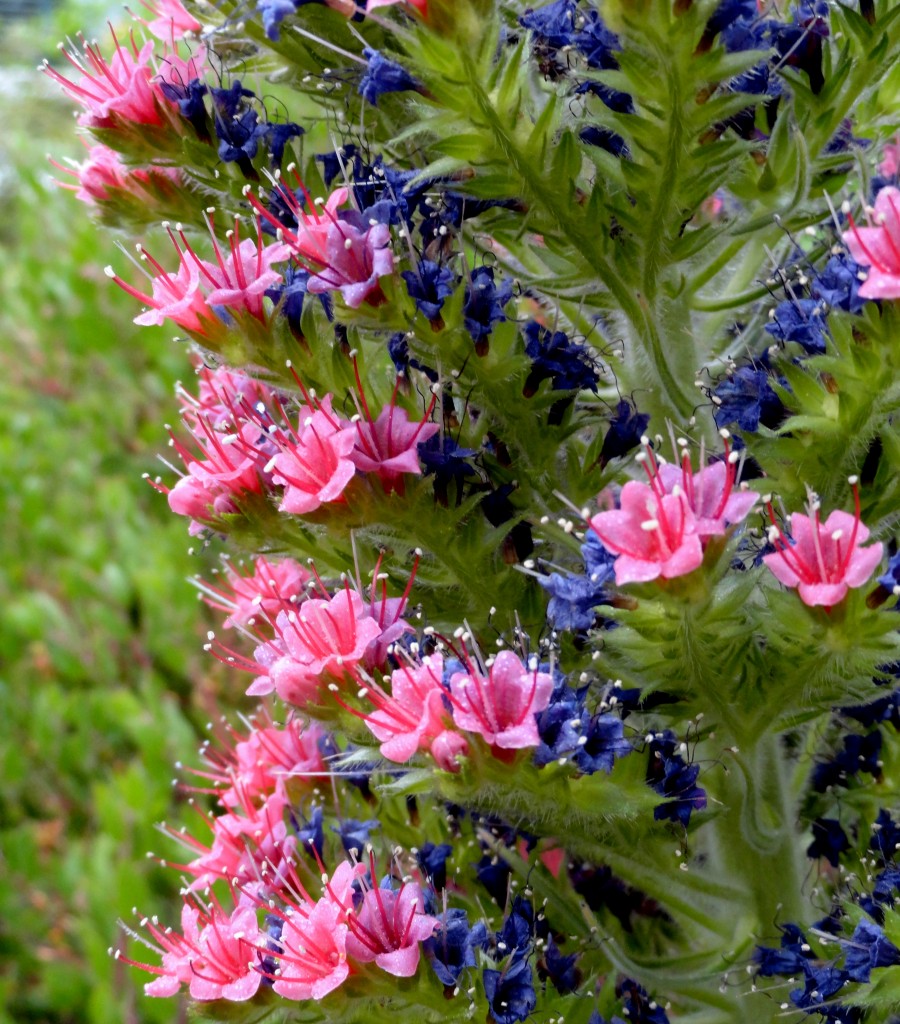 Fast forward to last weekend when we had almost 24hrs of drizzle. It never even occurred to me that I might need to stake the them. 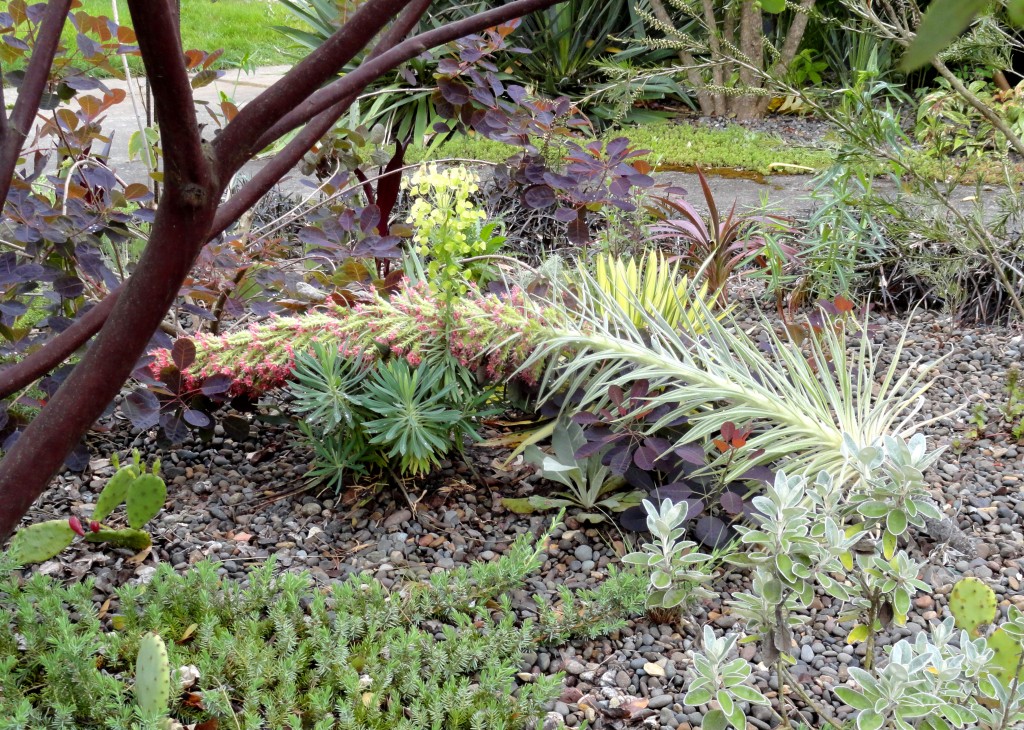 It wasn’t until I looked out the front windows on Sunday morning and could no longer see the “tower of jewels” that I realized all the water collecting on the flowers and leaves made them top-heavy and caused them to fall over. 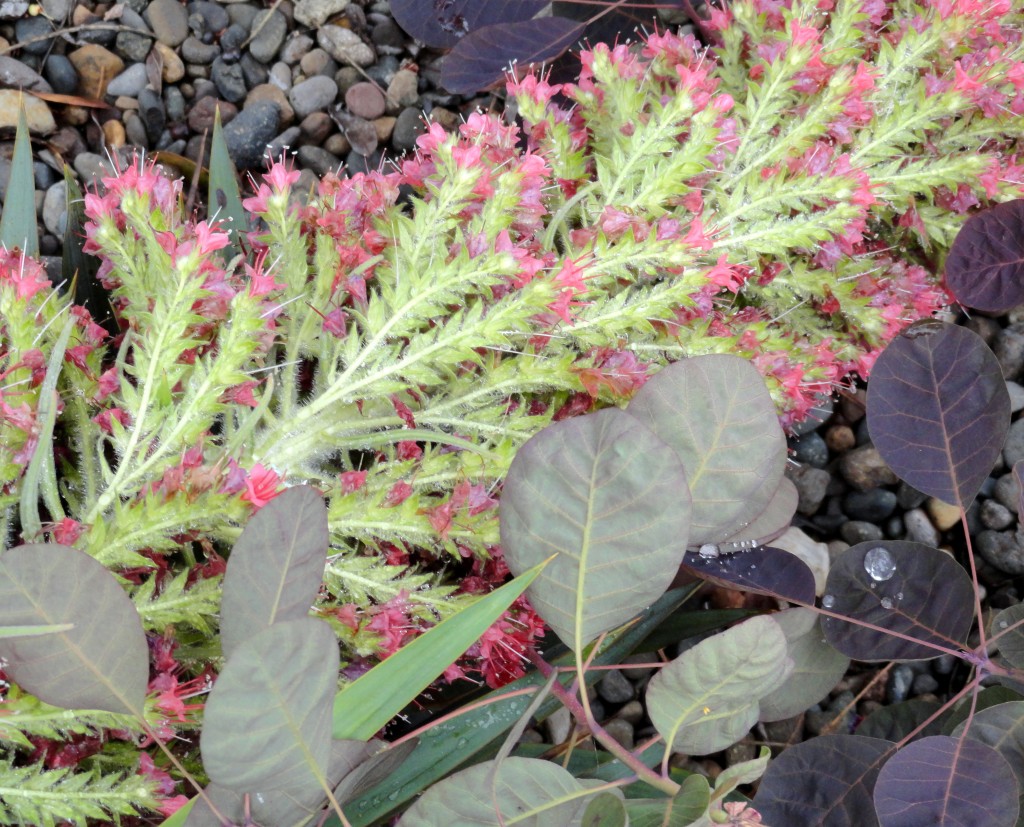 Luckily they didn’t break, or uproot. 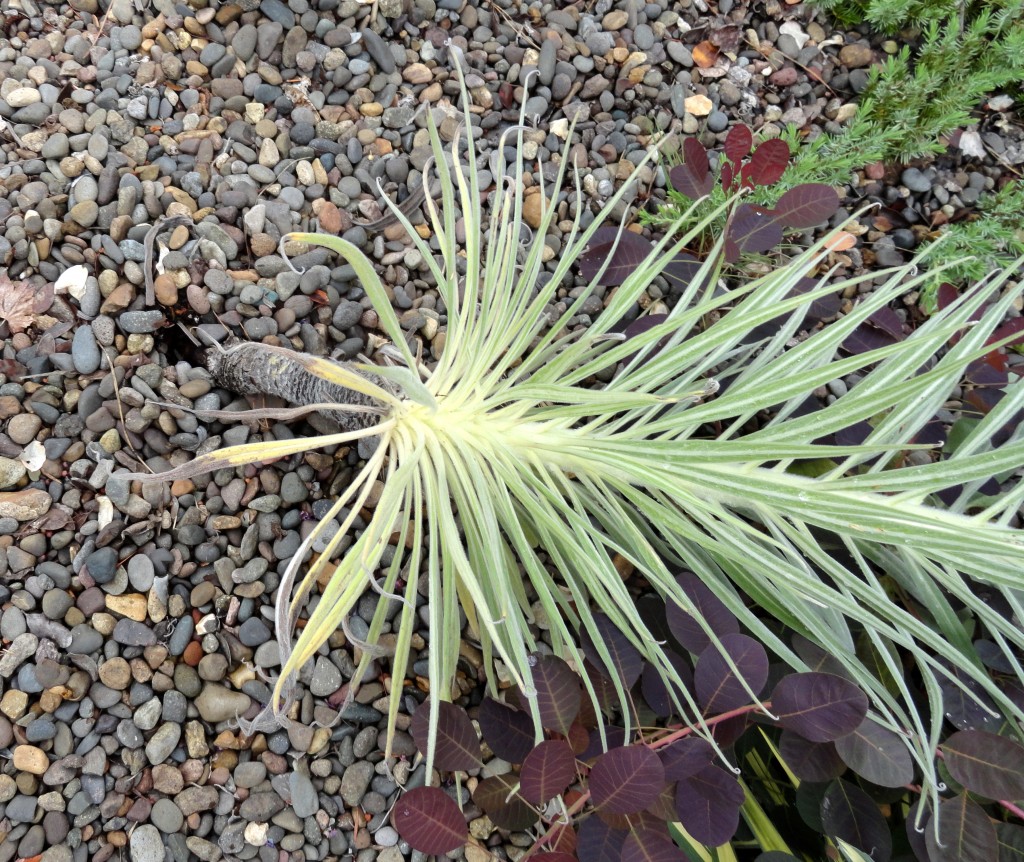 Just sort of gently laid down for a nap. 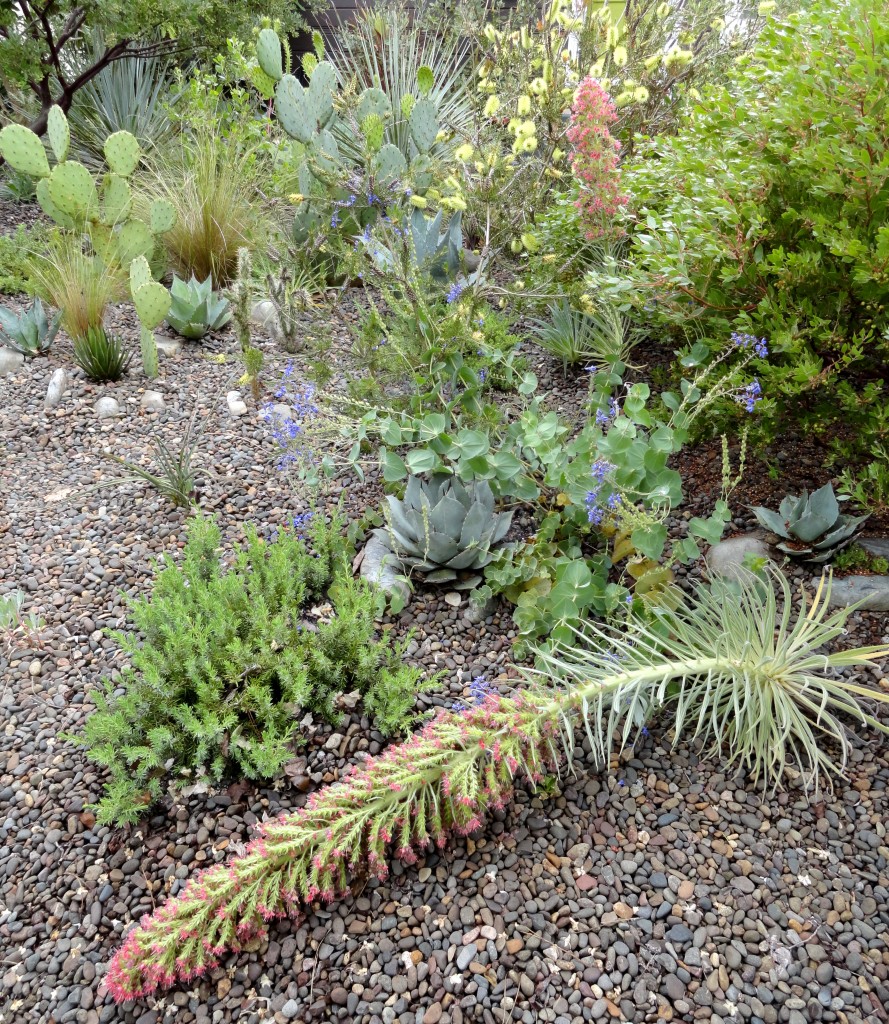 After the rain stopped I stood them up and — with the help of a little rope and rebar — all is right again. 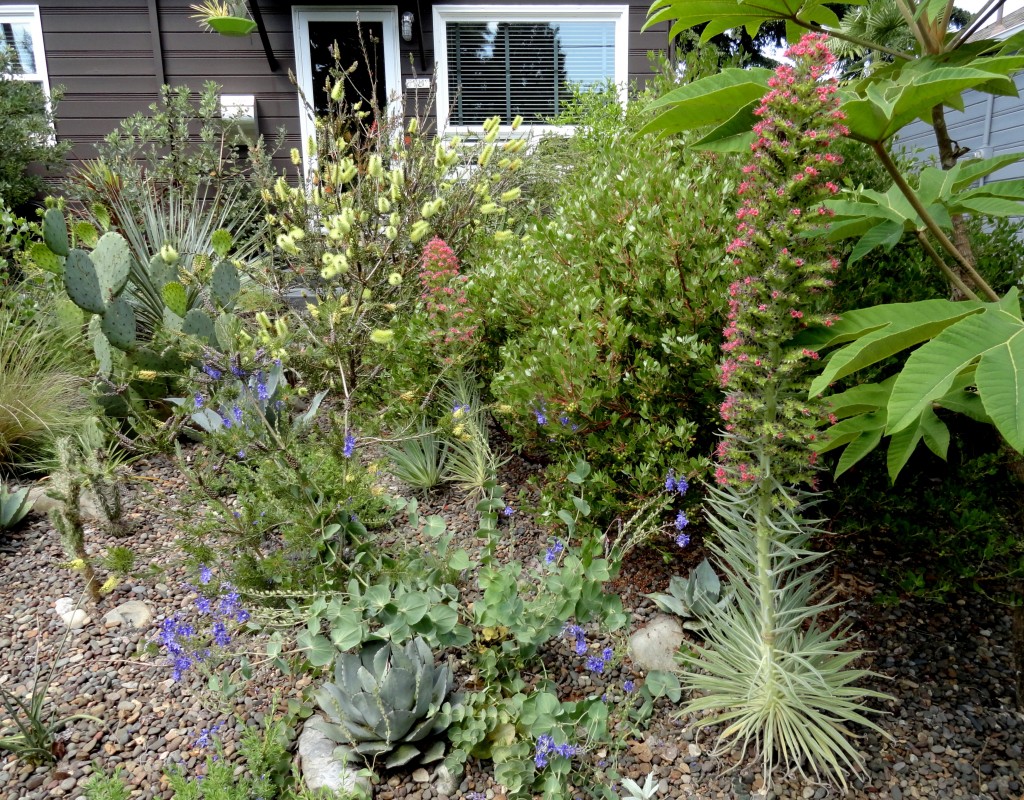 They will survive and hopefully I will be blessed with a sea of Echium seedlings. After all these plants have been through they deserve to live on through their offspring, don’t you think? 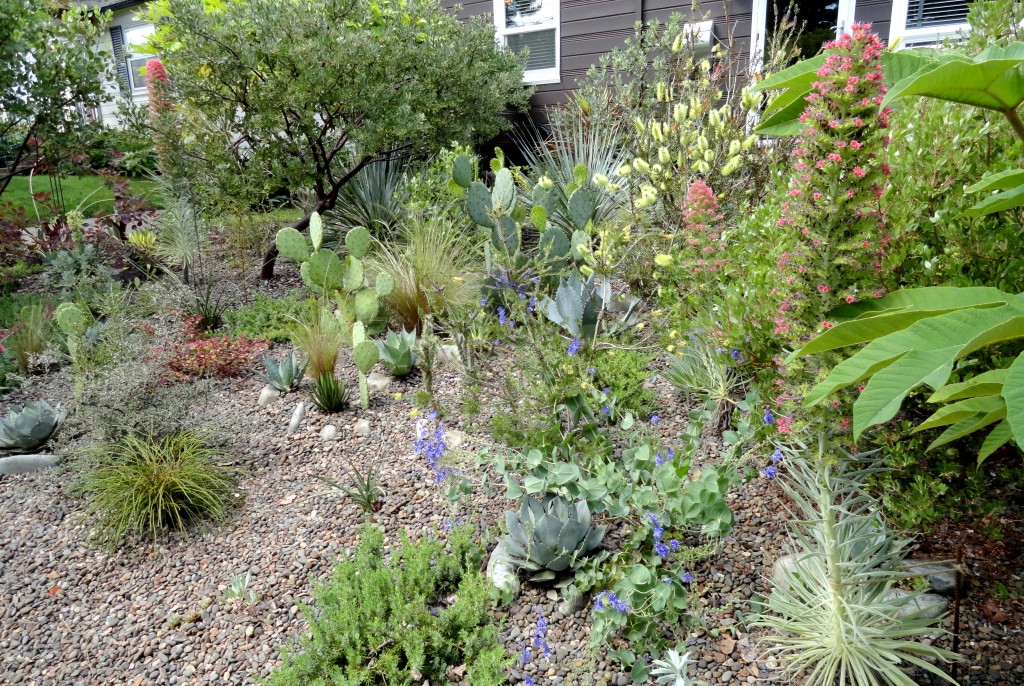 It probably won’t surprise you to learn what I really love about these plants is the foliage, the big silver/grey rosette just sends me! But of course the bloom is gorgeous and it’s fun to watch the bees work it over. I took a little video the other day (before the rain) and I’m going to post it on our Facebook page, check it out! 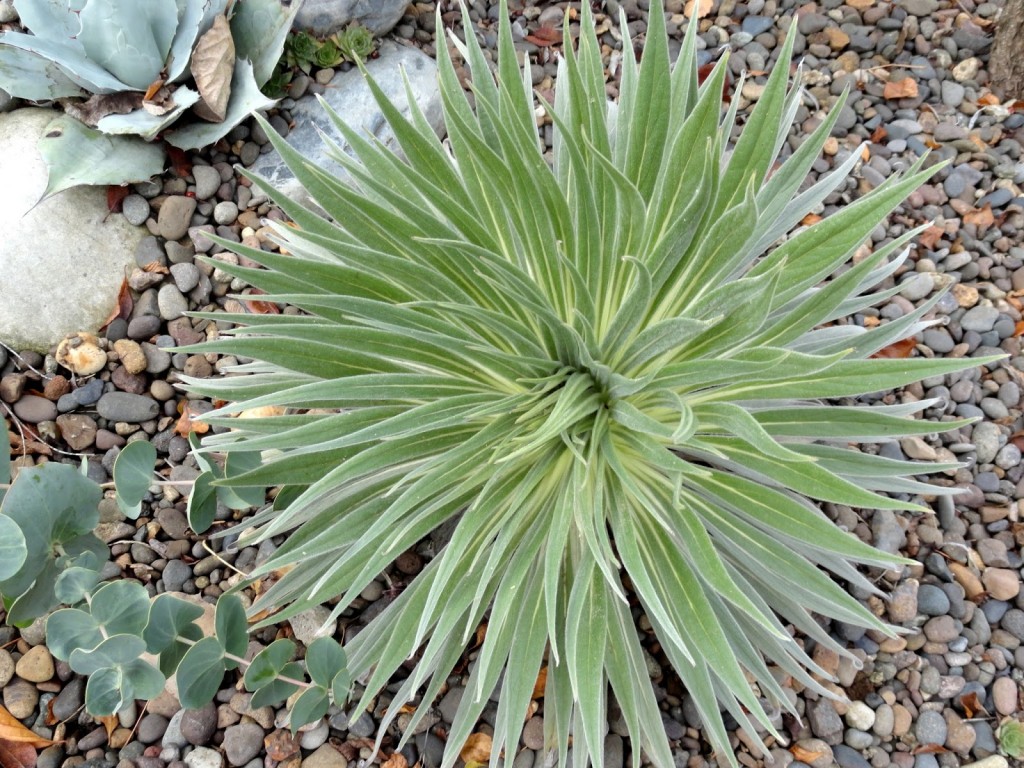