It’s getting kinda ferny around here… 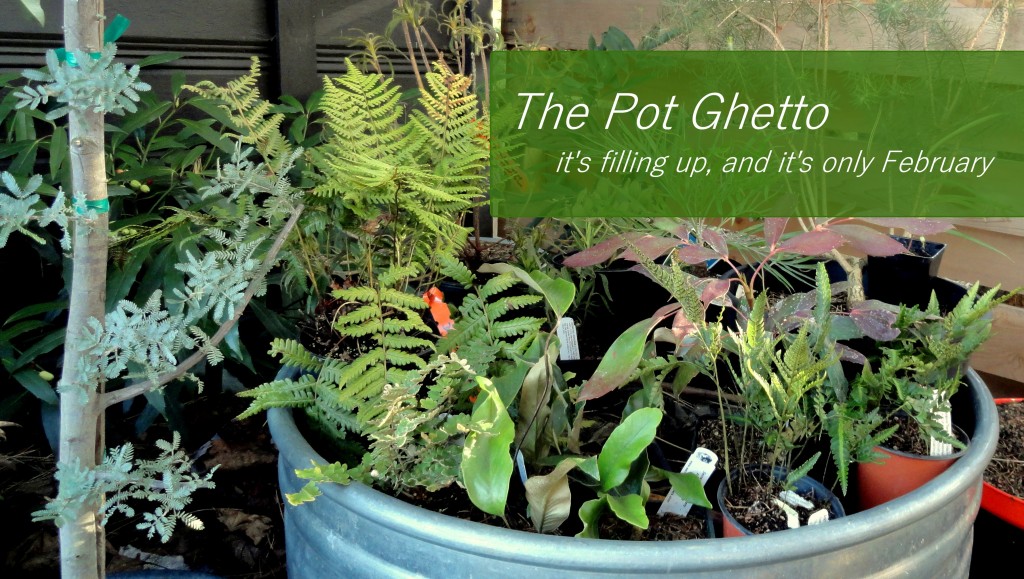 The pot ghetto, we all have one right? This is the time of year mine starts to grow. From now until mid-April I’ll be accumulating, but not actually planting. The photo above shows what it currently looks like, well, what the shady/protected ghetto looks like – there’s another in a more open, sunny part of the garden.

No doubt you’ve heard team plant lust getting a little giddy about our trial run at ordering and shipping plants via plantlust.com? Here’s my shipment from Gossler Farms, what you can’t see is how well those plants are secured in the box. I think it could have been turned upside down and they wouldn’t have moved (no doubt that’s the hope).

On the left is Rhododendron stenopetalum ‘Linearifolium’, a plant I’ve been lusting after for years now. So I finally broke down and made it mine, pink flowers be damned. The other plant, on the right, is Dryopteris lepidopoda. A semi-evergreen fern that goes by the common name of Sunset Fern – new fronds emerge bronze orange and mature to green.

It was with the addition of that gem that I began to see a pattern, I’m accumulating a lot of ferns!

From Secret Garden Growers comes this Arachniodes simplicior ‘Variegata’ (that’s also where I picked up the purple leaved plant in the center of the photo above, a Mahonia gracilipes, sporting its cool weather glow). The tendency for nurseries to describe the fronds of this fern as being “plastic-textured” makes me want to run from it, however I do love it when I see it in people’s gardens so, it was time to pick up a couple.

There’s also trio of Pyrosia lingua (Tonque Fern) hiding in there. I love these things!

The description from Plant Delights nursery “With leaves that look and feel more like a cow’s tongue, it’s hard to imagine that these are really ferns. Many books claim that Pyrrosia lingua isn’t winter hardy here, but we grow only uneducated ferns that can’t read gardening books. The hard rhizome grows along the ground and the leaves arise singly from it. The tongue-shaped leaves have a unique, cardboard-like texture with a felty backside and eventually make a nice evergreen mass. Pyrrosia prefers to grow on a steep slope or somewhere where the self-attaching rhizomes can adhere to a vertical surface.”

Finally there is this oddity…

It’s labeled as Cheilanthes argentea, but the leaves don’t look right for that name. A little poking around the internet and I think it’s probably Astrolepis sinuata. Of that plant Cistus nursery says: “A fern that loves sunny dry places. From the desert southwest comes these luxurious clumps gray-sage-green leaves with felty, orange undersides. To 1-2 ft tall eventually and evergreen to semi-evergreen. Full sun to dappled shade with excellent drainage and lean, gritty soil. Best placed where air circulation is good and the roots can remain cool, perhaps in a rock garden. Drought tolerant but enjoys occasional summer water. Cold hardy from 0F, USDA zone 7.” How fun! A fern that loves sun.

Here are a few other ferns I’m thinking of adding to my garden. Any personal fern-favorites you think I should be hunting for?