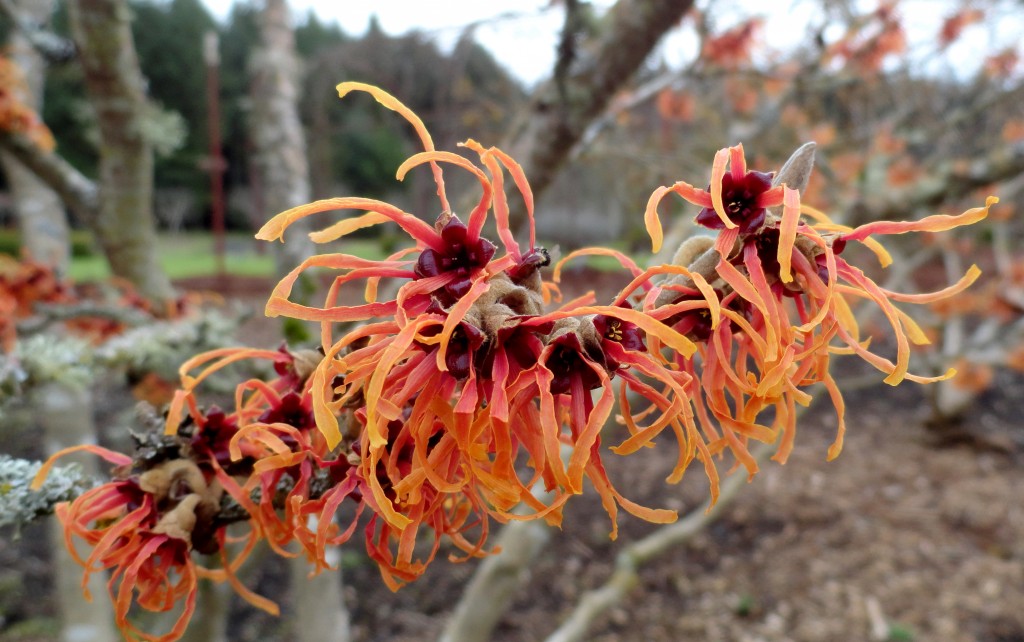 Think back to the first time you saw a Hamamelis (witch-hazel) in bloom. Did you think “wow, that’s beautiful!” or were your thoughts more along the lines of “what’s that freaky thing?” Don’t get me wrong, I love them, but they are rather bizarre, like colorful crinkled up ribbons tied on bare branches.

I somehow made it into my 40’s before seeing a blooming Hamamelis. How is that even possible? It was another year or two before I noticed that fragrance you hear so much about — I think I’ve got a pretty good nose but I just didn’t smell a thing.

I guess this holding-on-to-last-years-leaves while busting-out-in-bloom thing isn’t that uncommon? Mine (Hamamelis x intermedia ‘Early Bright’) is doing it this year.

So why did it take me so long to discover Hamamelis? I wish I knew. I grew up in a colder climate (USDA Zone 5) than the one I live in now, so I thought maybe they just weren’t cold hardy? Nope, plant lust lists plenty that are fine to Zone 5 and even a few that can tolerate colder temperatures.

In the article “I Love This Plant: Witch Hazel” on the Garden Design Magazine website, author Michele Owens quotes Scott Canning, director of horticulture at Wave Hill (“the spectacular 28-acre public garden in the Bronx, New York”), as saying: “Though witch hazel (Hamamelis) has an extroverted personality, its charms are relatively unfamiliar to American gardeners.” She goes on to write that Scott is “doing his best to change that by adding to the garden’s witch hazel plantings and singing the deciduous shrub’s praises. Last winter, he provoked a run on witch hazel at one of his favorite nurseries after astonishing a lecture audience with some of Wave Hill’s most beautiful and deeply perfumed cultivars.” (hint: there’s a list at the end of the article)

It was at Portland’s Elk Rock Garden, the garden at the Bishop’s Close, that I first caught a hint of that perfume. Walking through my neighborhood nursery, Garden Fever, almost a year later I was hit by a similar scent. That’s all the push I needed to finally add a witch-hazel to my garden — that plant became mine without a second thought.

As it turns out my plant came to Garden Fever via Gossler Farms, their description still cracks me up: “Wow! What fragrance! H. ‘Early Bright’ has small orange-yellow flowers in January. The flowers aren’t very exciting but the fragrance is probably the best of any Hamamelis we’ve sniffed.”

You may have noticed all of these photos were taken at The Oregon Garden. I had the opportunity to visit recently, thinking there wouldn’t be much to see beyond the conifer collection. Obviously I was wrong!

So what about you? Love them? Grow them? Which one(s)? And when did you discover them?

I’ll leave you with another quote from Michele Owen’s article, again from Scott Canning: “The first warm spell in winter, to see that thing in full bloom-it is really remarkable,” he says. “Witch hazel is the plant of hope.” The plant of hope, I like that.