We Interrupt this Winter for a Sun Break 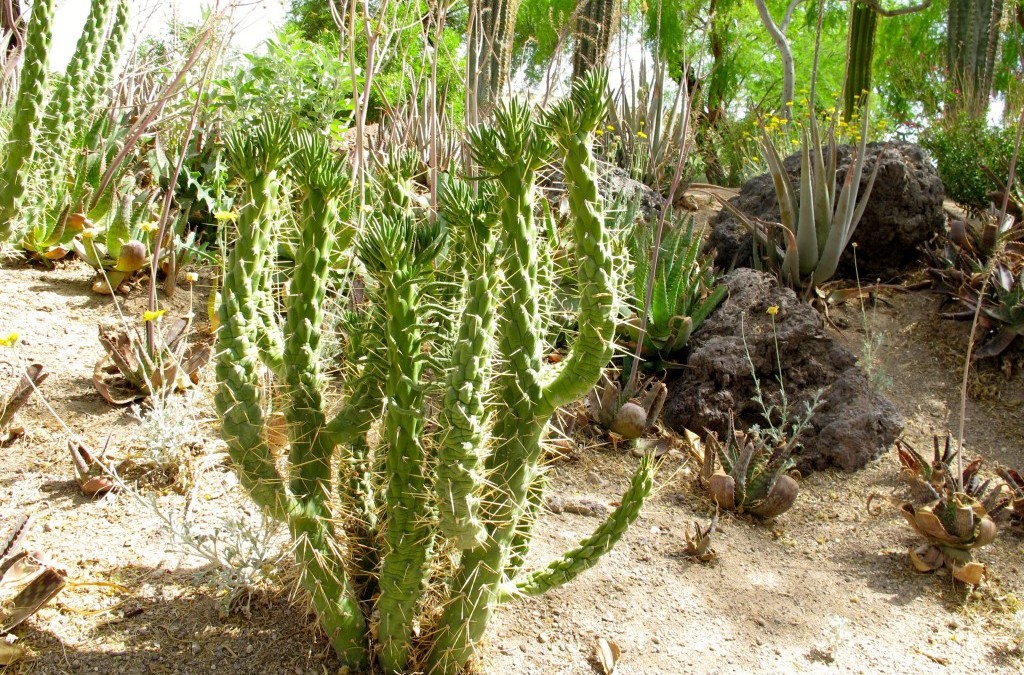 Could you use a little break from cold wet winter weather where you are? We’re approaching what I consider the “power through” part of winter in Portland. I get the winter doldrums later than some people, because I love it up through December, and clouds and rain feel right to this native Portlander. But I feel a twinge of impatience coming on. I want to clean up the messy plant skeletons and fallen leaves they tell us we should leave in the beds until spring, and get planting.

It’s plenty warm right now. Tomorrow’s forecast is 62°F. We’re headed into February, where we always seem to get a false-spring where you see people standing motionless on sidewalks soaking up the sun. It’s hard to believe that we’re still in for the late frosts that always hit. But be patient, we must.

This is the time of year I’d borrow a little sunshine and visit the non-dormant plants with a quick sunny vacation down south, if I had the opportunity. But it’s not in the cards this year, so I’m going to revisit some old photos I didn’t share from the desert garden outside of Las Vegas a couple years ago. Think warm thoughts. 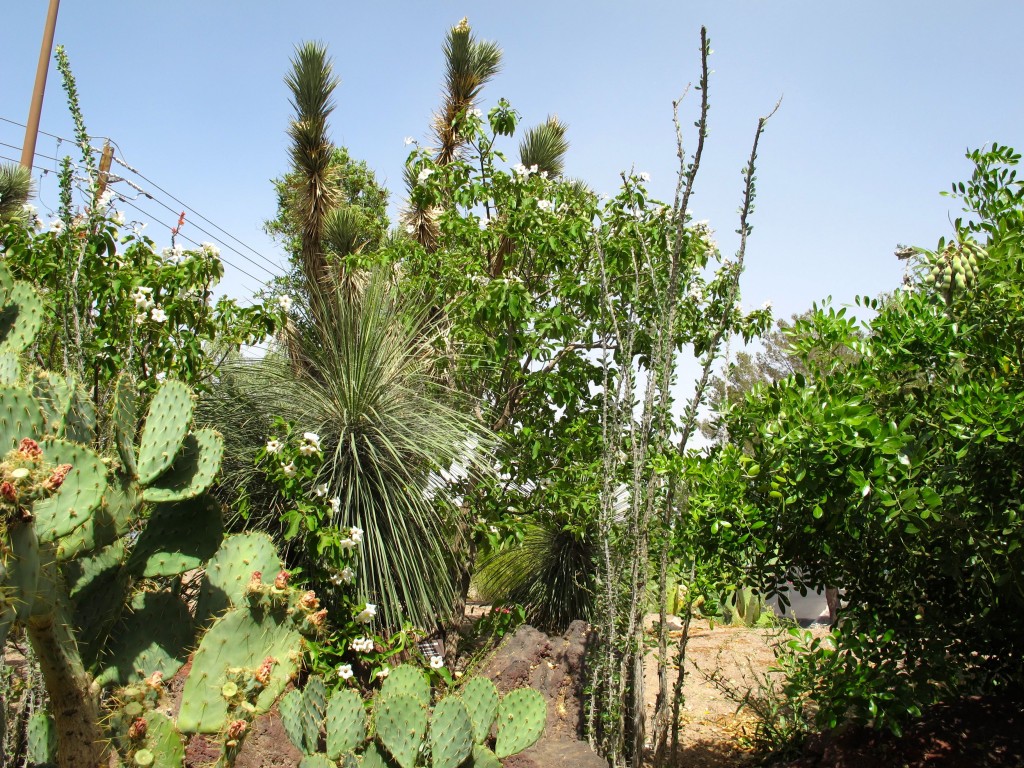 Most of the desert garden looks sparse, which I enjoy, but certain groupings, like this one, look rather lush and dense. My old notes said something about a “Mexican Olive” on this photo, but what did that mean? Got me. But it’s a pretty collection, no? 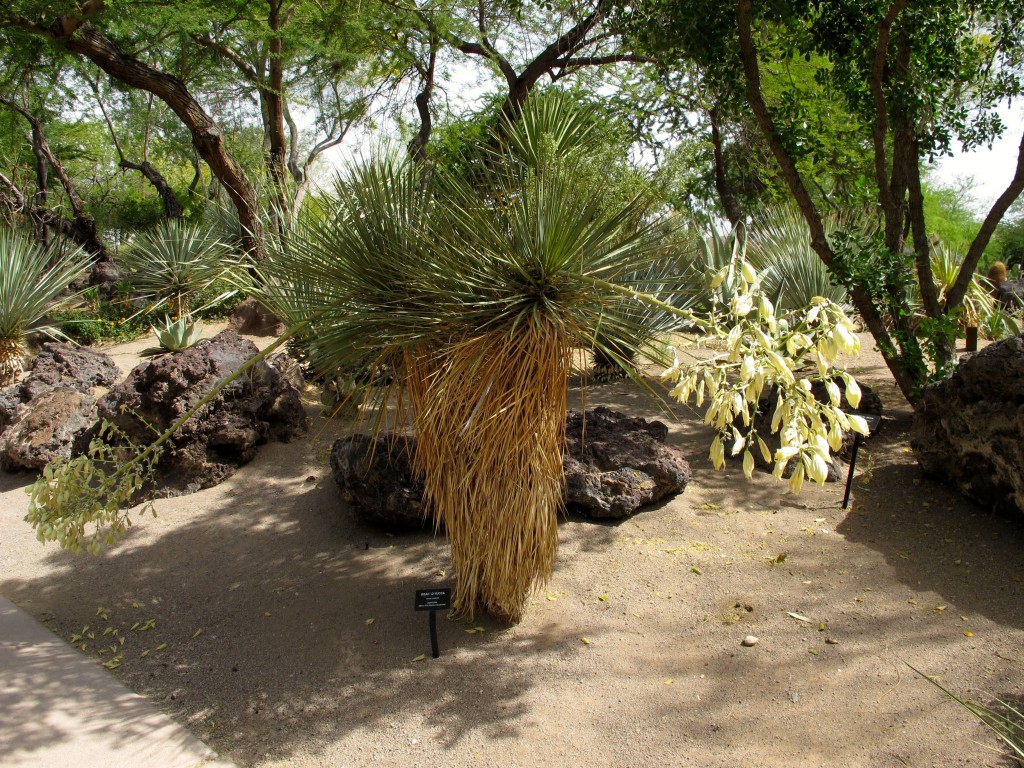 A trunked yucca always reminds me of Joshua Trees in the desert. Labeled beaked yucca, I’m guessing this is Yucca thompsoniana. 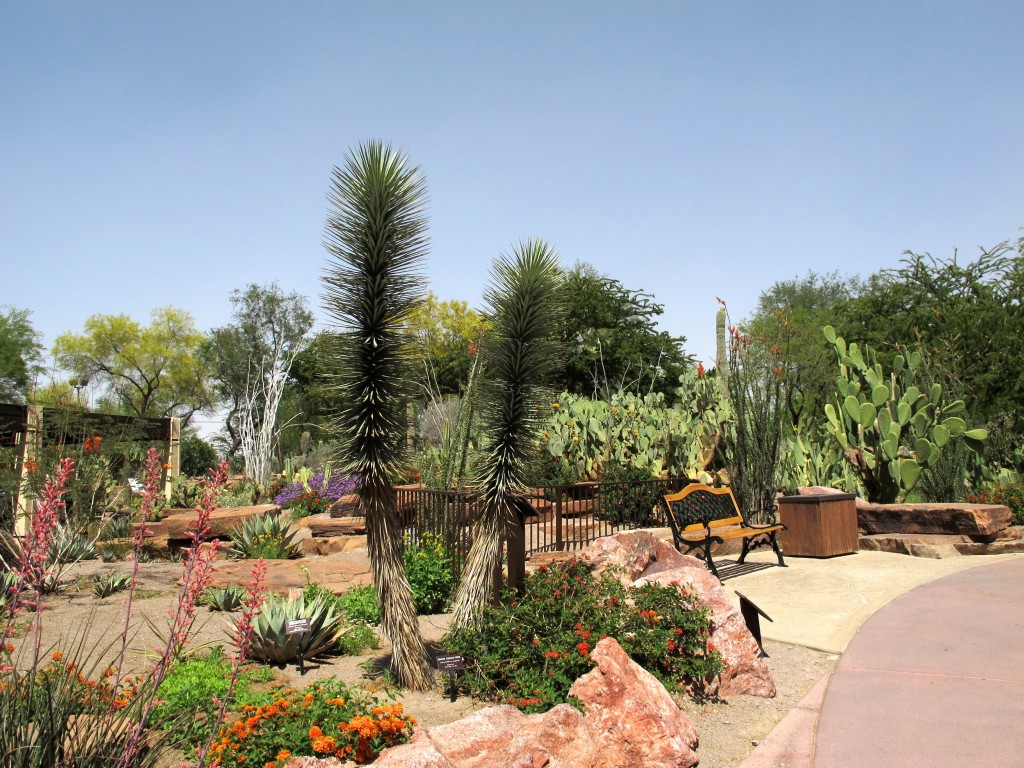 There is a good sized Joshua Trees in this garden, but their bench/trash can/fence sort of interrupt the scene. I’m sure it’s a nice place for someone to sit and take in the garden. But oof, it was 100°F degrees. That’s not sit-in-the-sun weather in my book. Remembering it makes today’s cool rainy Portland weather feel like relief. 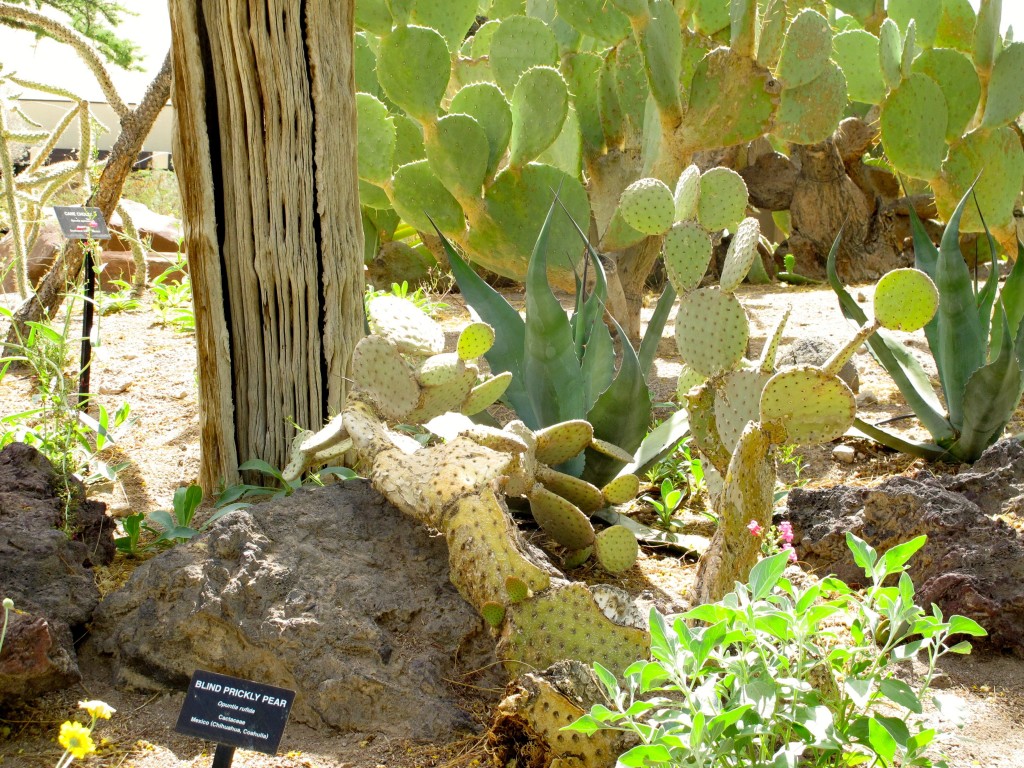 Opuntia rufida at the feet of a Saguaro skeleton. 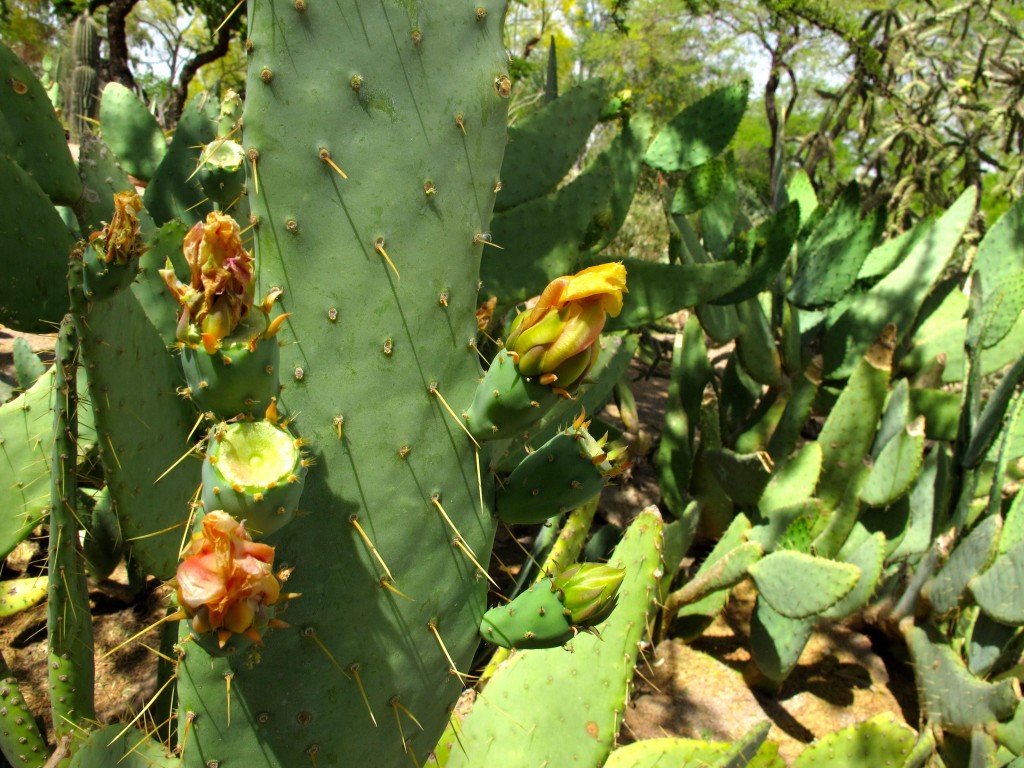 Cow’s Tongue Cactus. That name always makes me smile. Caught in that awkward stage after the bloom is fading, before the fruit comes into its own, but who cares? Still a cool plant. 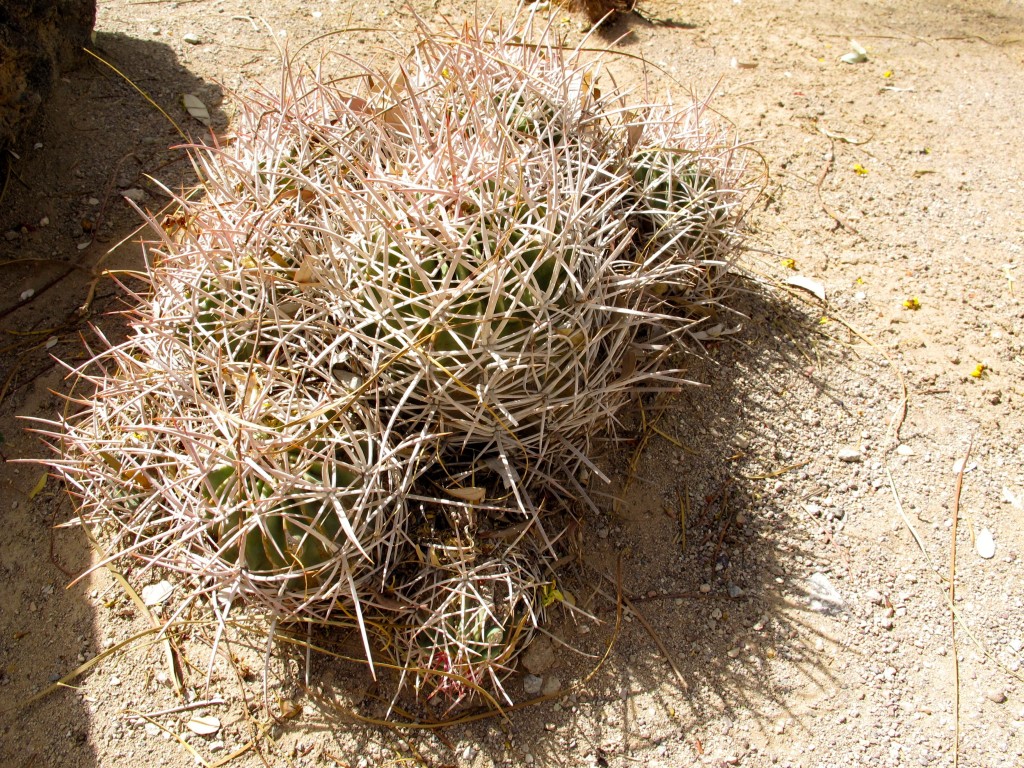 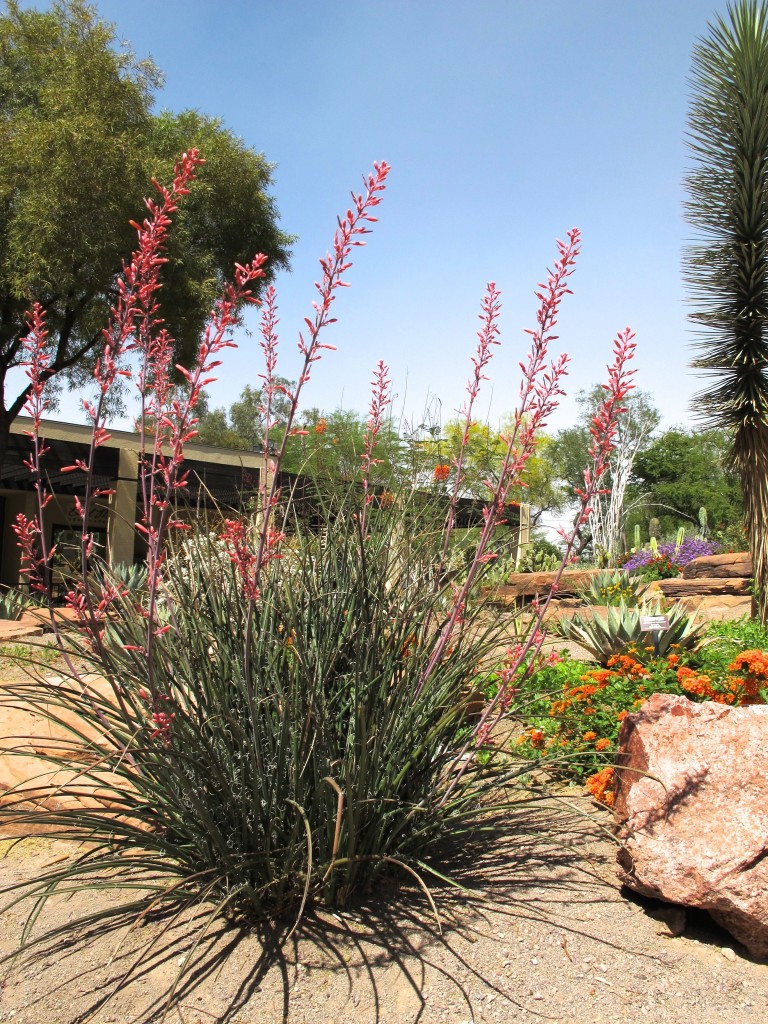 One could almost get tired of Hesperaloe parviflora around Las Vegas. They’re all over the medians, blooming their heads off. But they seem so exotic to us Portlanders where we rarely see them, even though they grow fairy well here. Me, I’m after the yellow flowered variety this year. 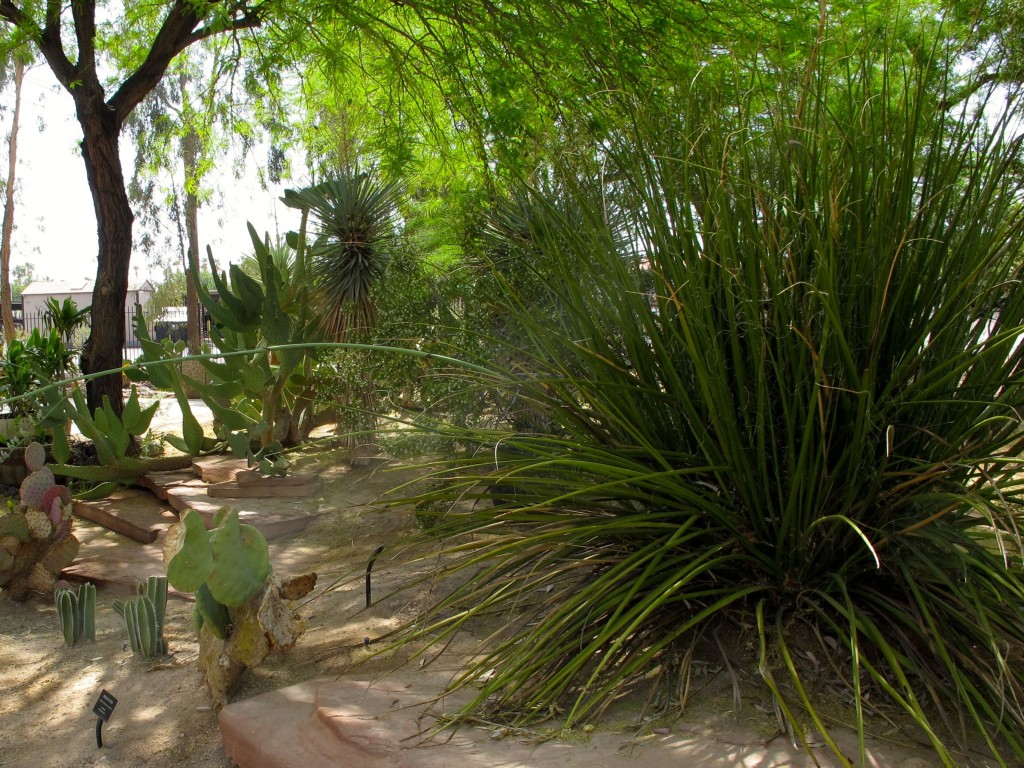 A big mature Hesperaloe funifera. I believe I am afflicted with “flower blindness.” I never notice them, and in the case of this photo, it looks like there’s a flower just off frame. Now I wish I’d captured it, but I was enamored with the size of the plant at the time. 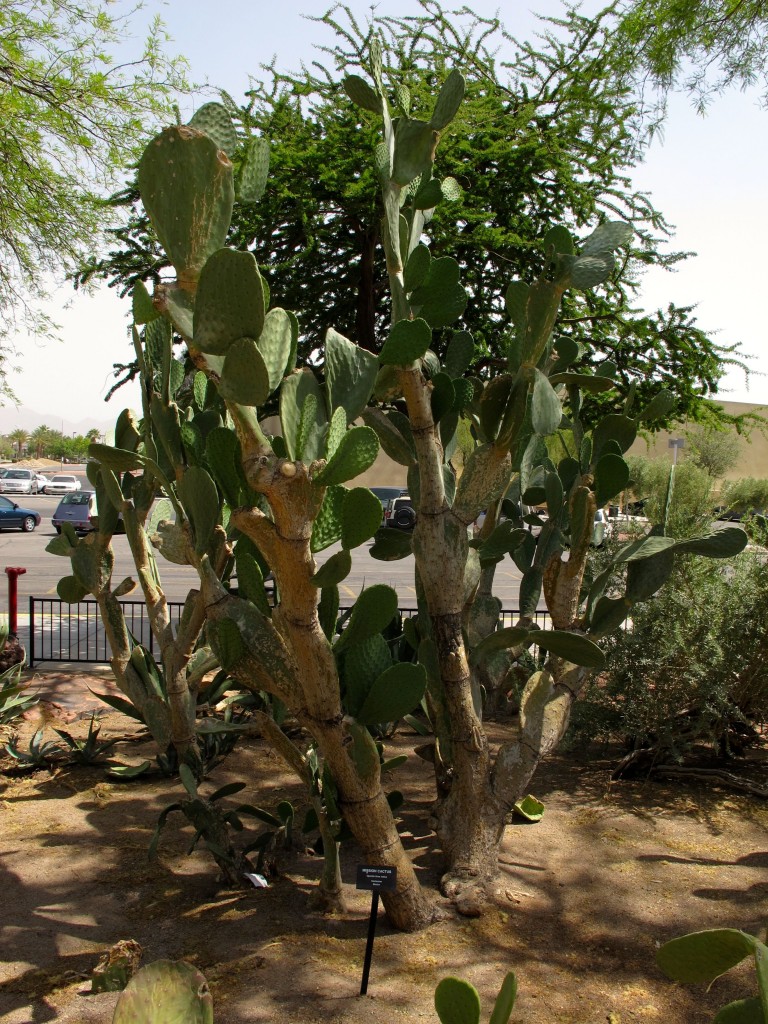 A big mature Mission Cactus. I can barely make out the Latin name, but I’m thinking it’s Opuntia ficus-indica. 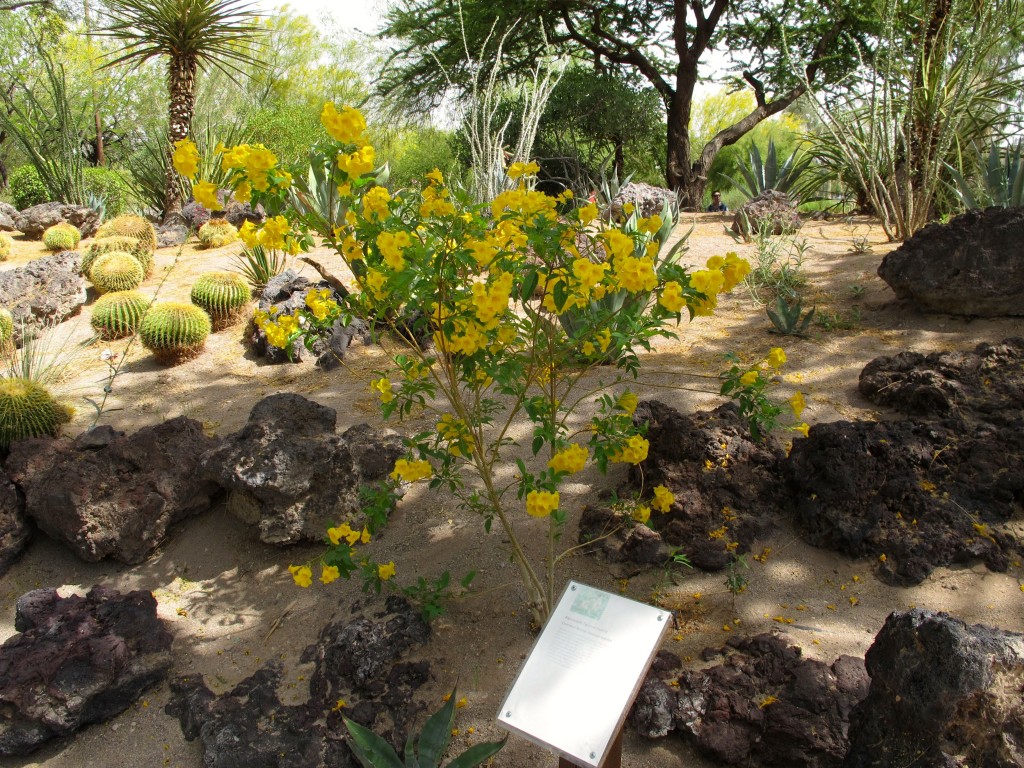 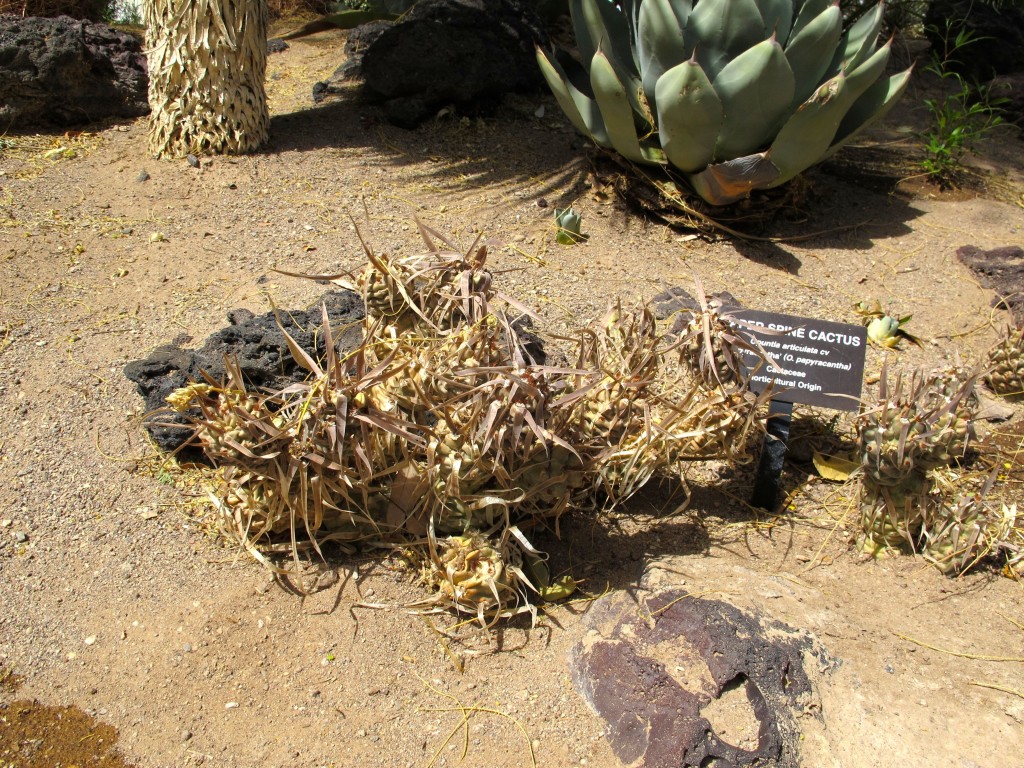 I have a soft spot for weird spines, even if it objectively looks like a pile of sticks. Paper Spine Cactus, Opuntia articulata v. papyracantha. 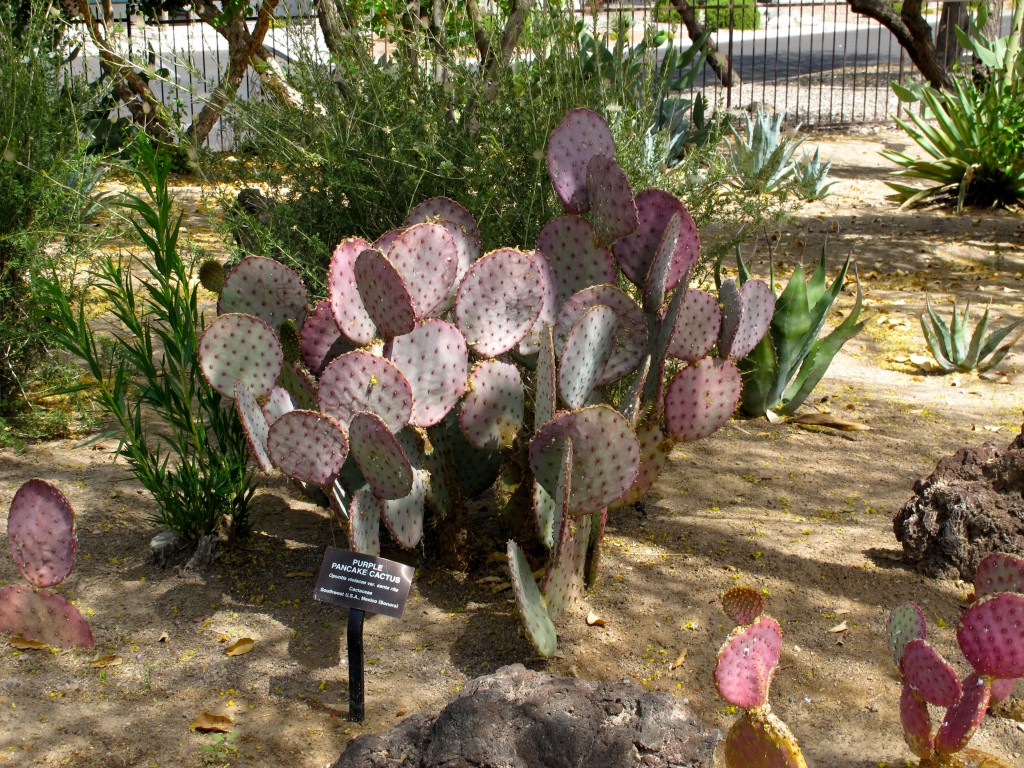 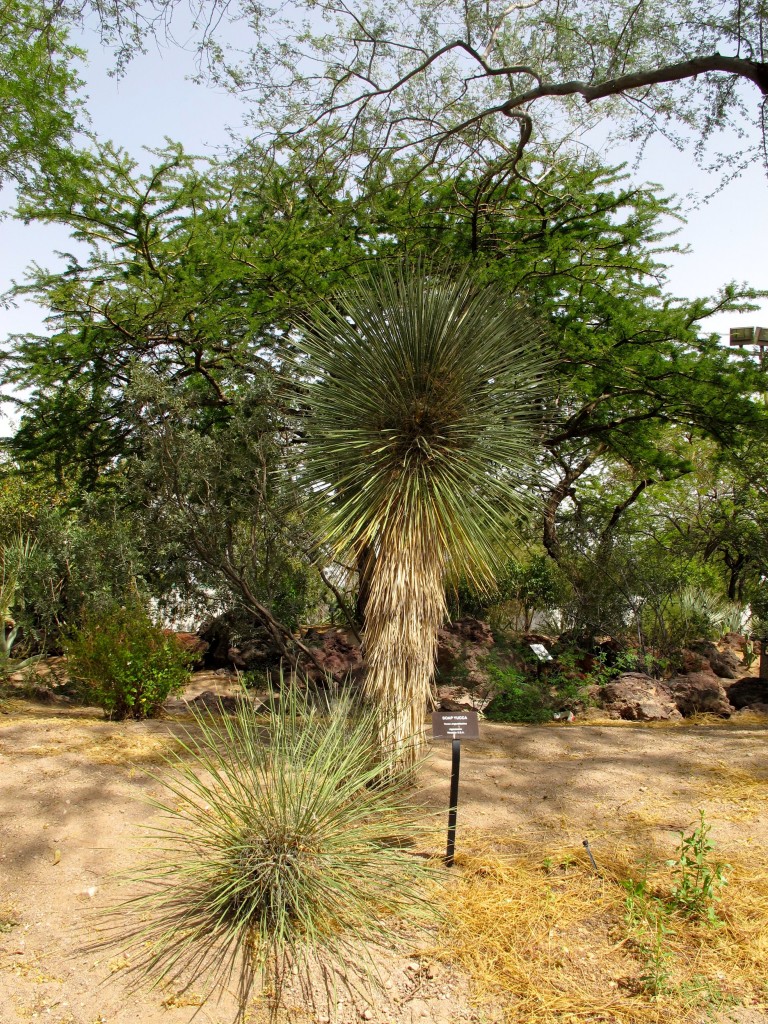 Soap Yucca, or Yucca angustissima. There’s no such thing as too many yuccas. 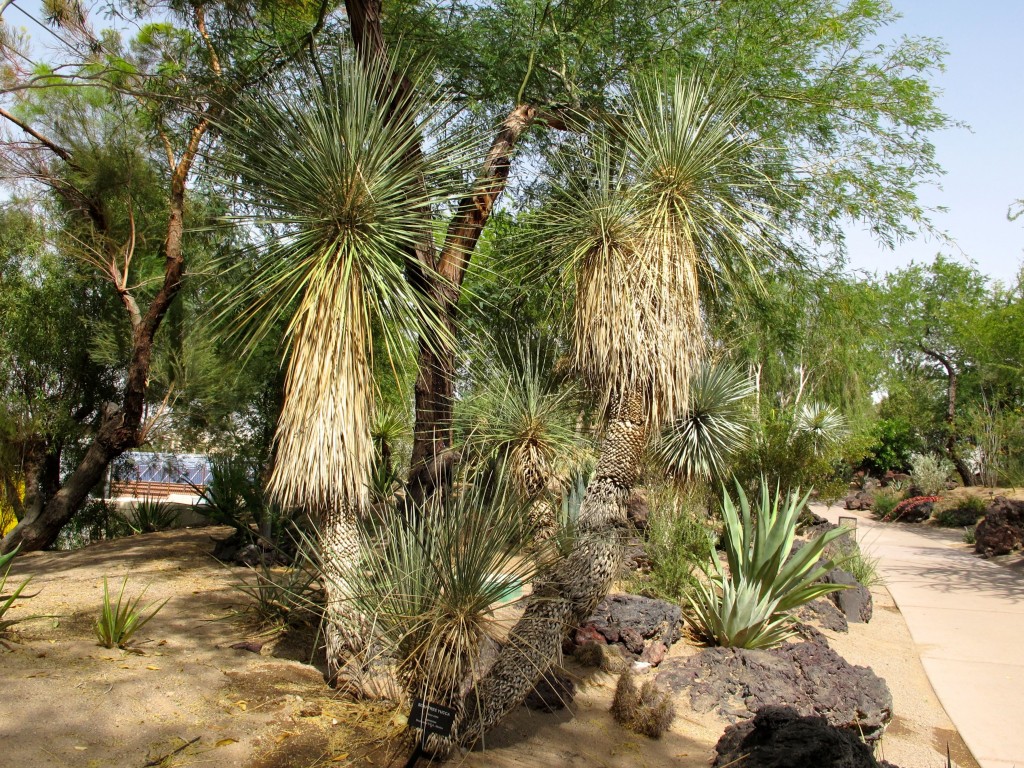 And then there’s the Soaptree Yucca here, Yucca elata. Hardy to zone 7. Hmm. I sure could use a clumping, trunking, narrow leaved Yucca. Such presence. 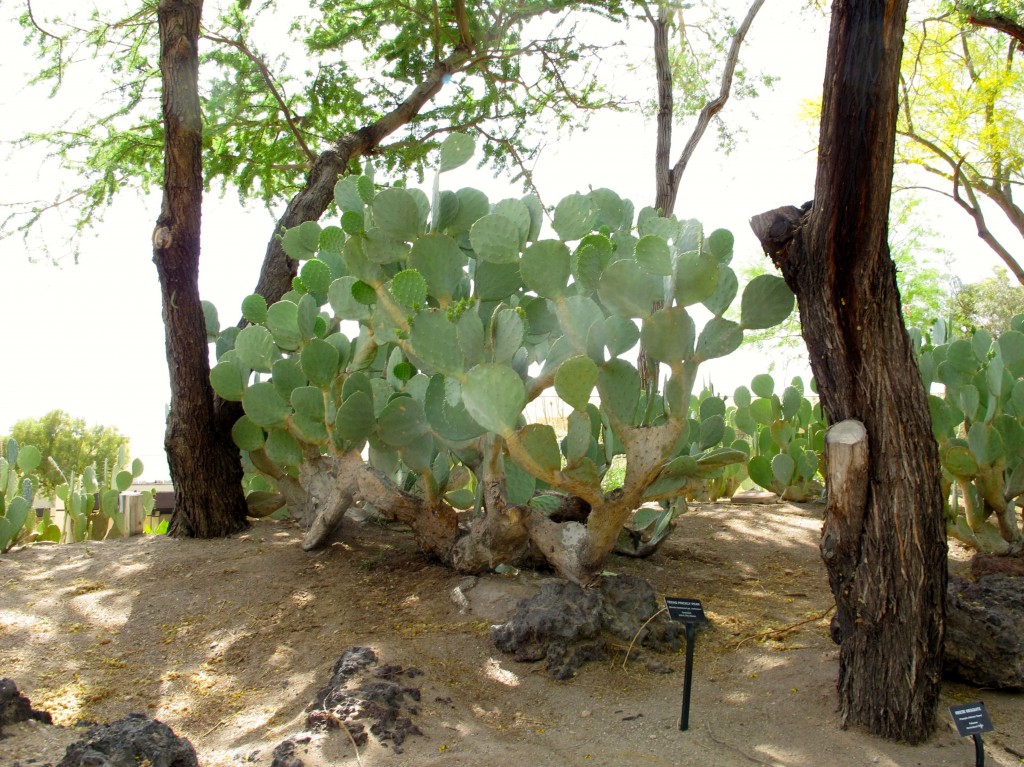 A beautiful Texas Prickly Pear, Opuntia lindeimeri var. lindeimeri. It picked up a little lens flare in this shot, like angels were singing. 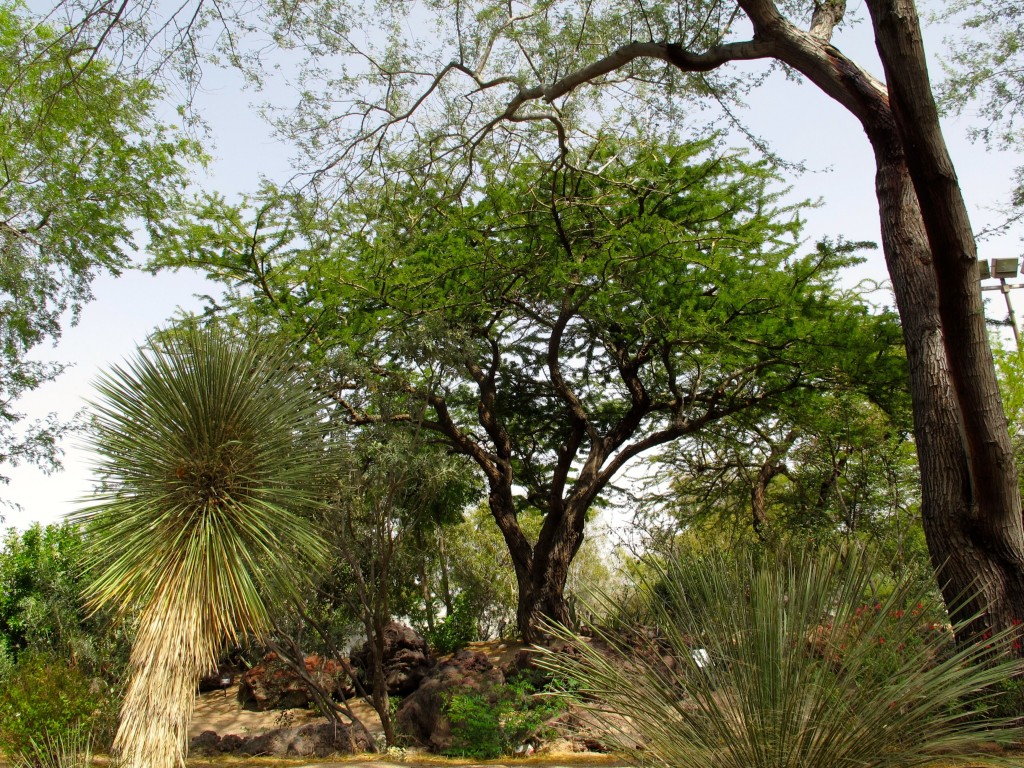 And an unknown mystery plant, which stood out with its purple-y flowers and soft leaves amidst all the spikes. The identity is on the tip of my tongue but I can’t quite place it. 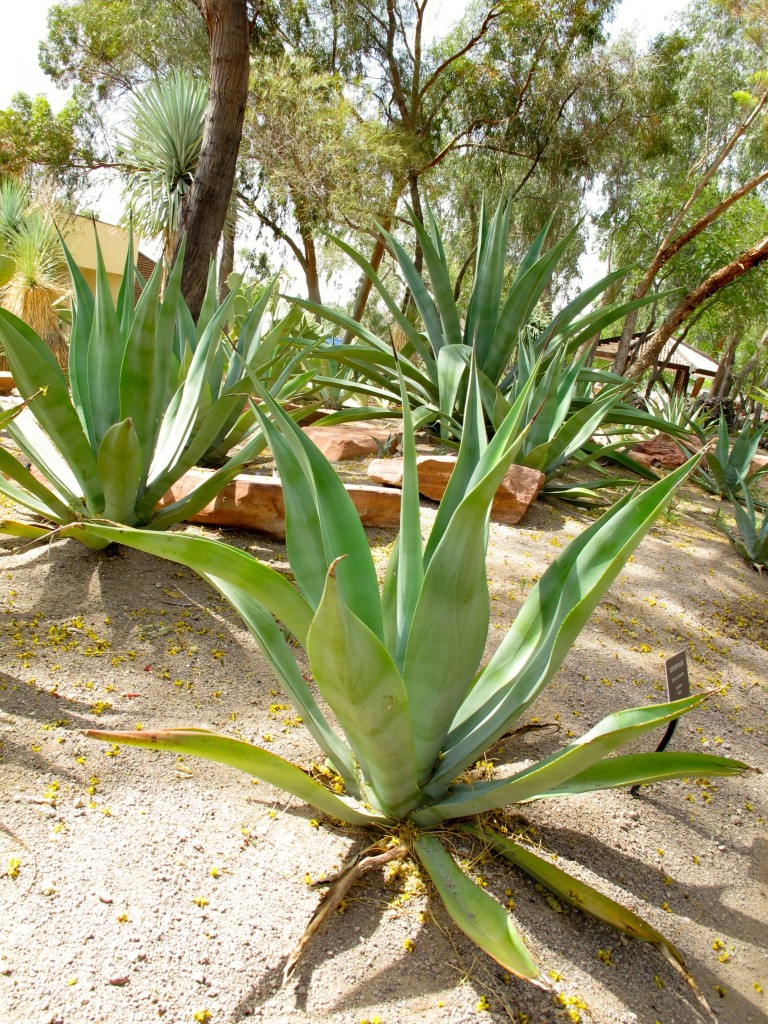 I love the armies of agaves. I wonder how big they are now. I better go back soon and check.

The to-die-for plant in the header is Peru native Austrocylindropuntia subulata. Zone 9. So close. Some years it could make it here.

It’s nice to remember, as we head toward February, it’s perpetual summer a short plane trip away. But I’m glad we have seasons here in Portland. Our deciduous plants mean that we get four different gardens throughout the year, which is actually pretty cool. If you’re pining for spring, stay strong. It’s on its way.