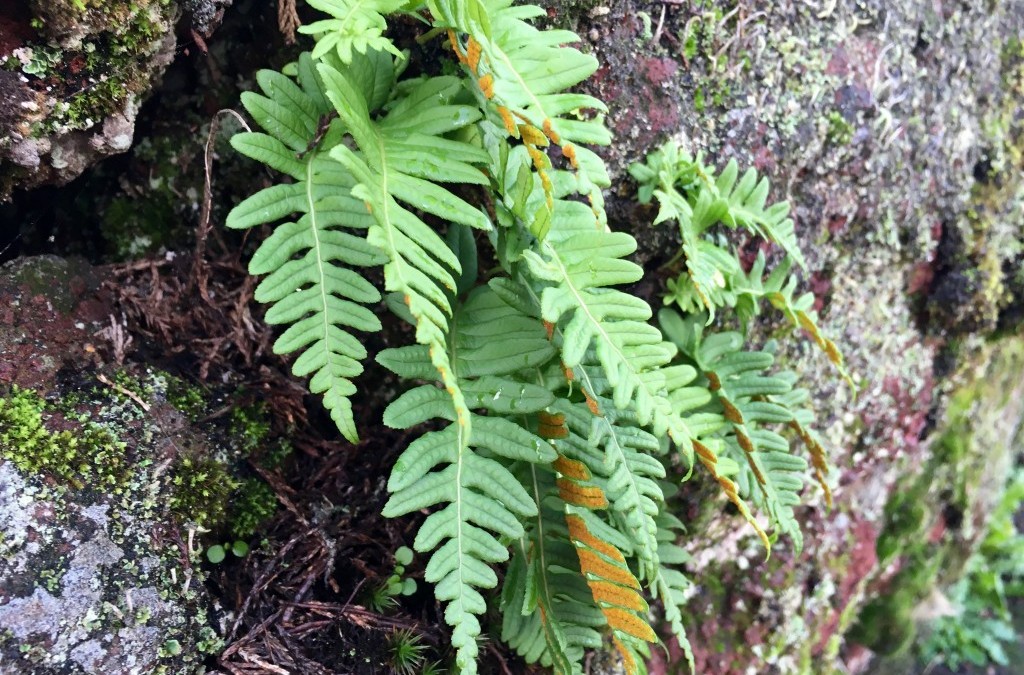 Last week I meant to get around to the topic of plants that are still looking good in there garden. Of course, if you avoid going outside because of pesky record rainfall, tornadoes and stuff, you’d never know. We’ve had day after day of 2-3 inch rain, followed by more of the same. And a tornado in Battle Ground WA, twenty miles north of where we live. Unusual for these parts, but not unheard of.

Because of the abysmally wet and windy conditions, I’ve been disinclined to put in my daily 2 to 3 mile trek. It’s one thing to get drenched on occasion, but stringing those days together gets to be a bother.

Pumpkin does not find this amusing. I mentioned last week, sometimes I can get her to forego the walk if we go out front in the cul de sac and she has the opportunity to do a sniff around. I’m accustomed to viewing the front garden primarily from the house side, so it was a nice surprise when we went out front and I got to see from the street side.

It’s especially good for checking out from the sidewalk because the garden is atop a rock wall, putting the bed right at eye level.

This rosemary is creeping toward the edge of the wall–just like I’d hoped. Dear dog, I love it when a plan works.

I got a new iPhone a couple weeks ago, and for the first time ever, I scooped my brilliant kids with my, hmmm, version–is it called, or model. Hells bells. What I’m trying to say, is mine is newer than theirs. I got the 6S primarily for the picture taking capability, because even though the man in this house has super duper cameras with gigantic lenses and talks about f-stops and aperture and pixels, etc., that’s never going to happen with me.

Megan has been saying from day one, if you can see dirt, you’re not done. I just read that in a fancy new-method of gardening book, like it’s a spankin’ new idea. (No, I can’t remember which one. But it’s true.)

These little phones take mighty fine pictures, and for my skill level, I’m happy to point, push, and then find the picture magically on my computer. Done!

Quite a few plants looking good in the south-side garden too.

One little wrinkle, I guess the new phone has this “live” feature, wherein it takes a 3 second video. I find this a bit confusing. When I have a technology savvy  kid in the house, my usual method of research is swear at it a bunch–and then yell for tech support. (Megan & Elliot: has the term tech-savvy become passé, like mole, wherein I’m not supposed to say it?)

Recently, I’m turning over a new leaf, and at least trying to figure things out before yelling for help. Sometimes the Google answers my questions, however, there’s too damn much clock-building talk on the tech support page. I JUST NEED TO KNOW THE TIME. You know what I mean?

My point is, I’m happy with new point and shoot technology, though my son-in-law Justin tells me there’s a lot more to iPhone photos. He’s a pro, what can I say? Little steps, I’m thinking. In the meantime, I’m happy to use the basics–that is when I can get myself out there and take a look.