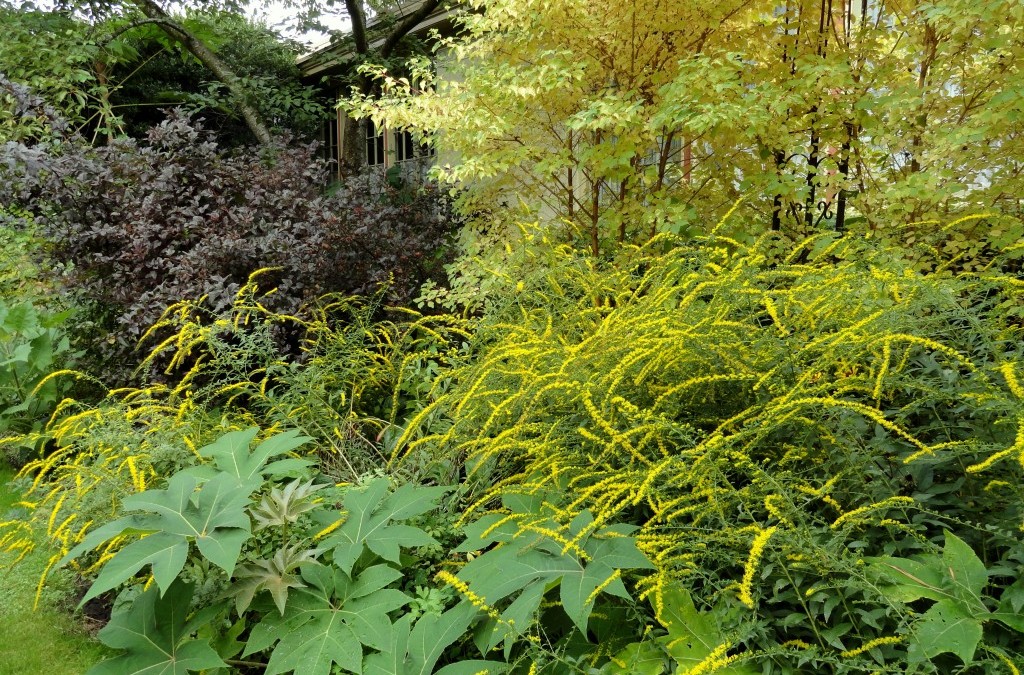 Last week I shared the spiky side of the Kennedy School gardens, but there is so much more to see! Walking the grounds is always a mix of checking in on old friends, to see how they’re doing, and discovering new things. Sometimes I have a pretty good idea what they are, other times I don’t have a clue.

For example I’m smitten with the bright green ground cover in the photo below, does anyone have a guess as to what it might be? (update: Santolina, possibly S. ‘Lemon Fizz’) 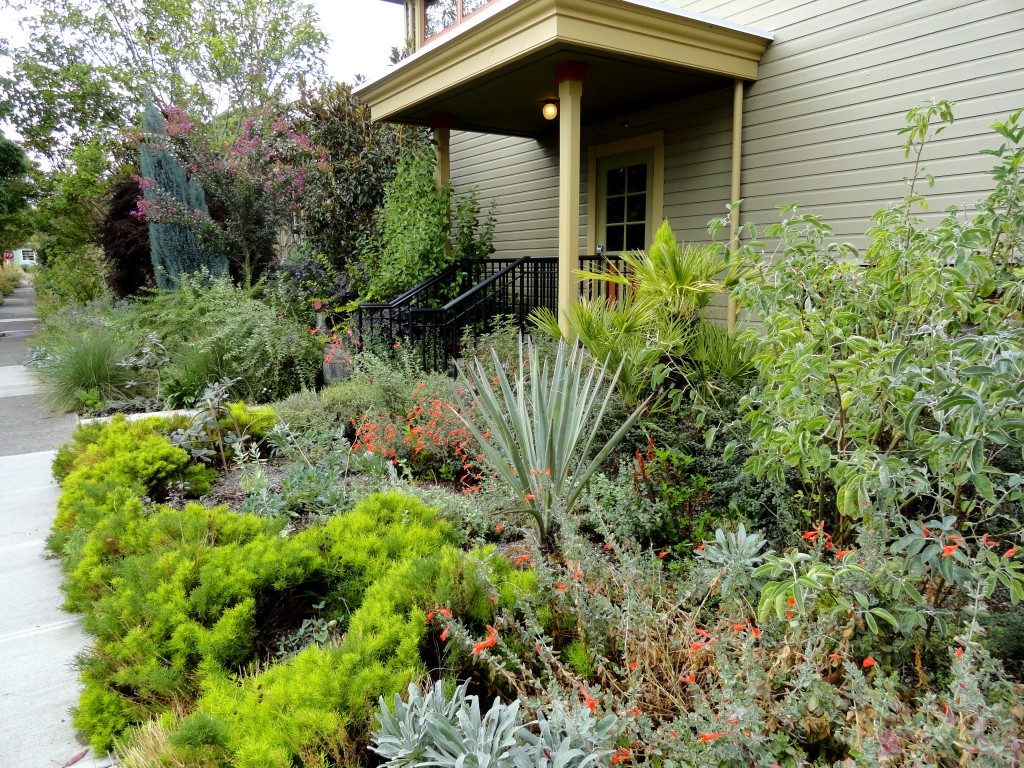 Here’s a close up, it pained me to crop out that beautiful Yucca. 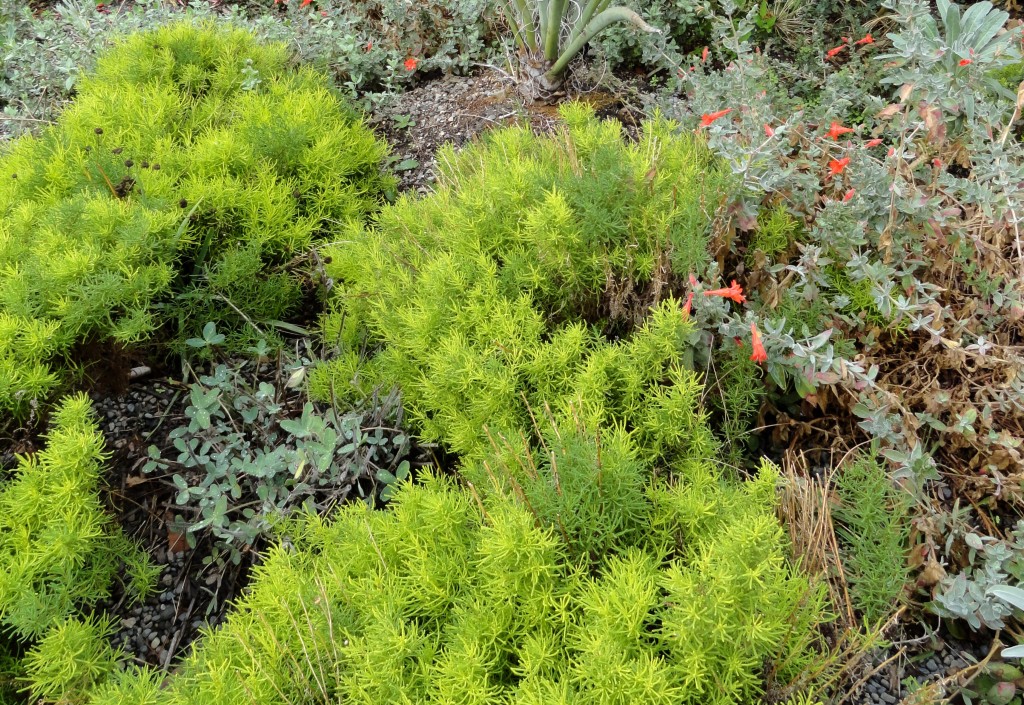 A walk about is also a great time to pick up on combinations that work well. I went home after this visit trying to think of what plant with chartreuse foliage I could plant near my Loropetalum chinense. 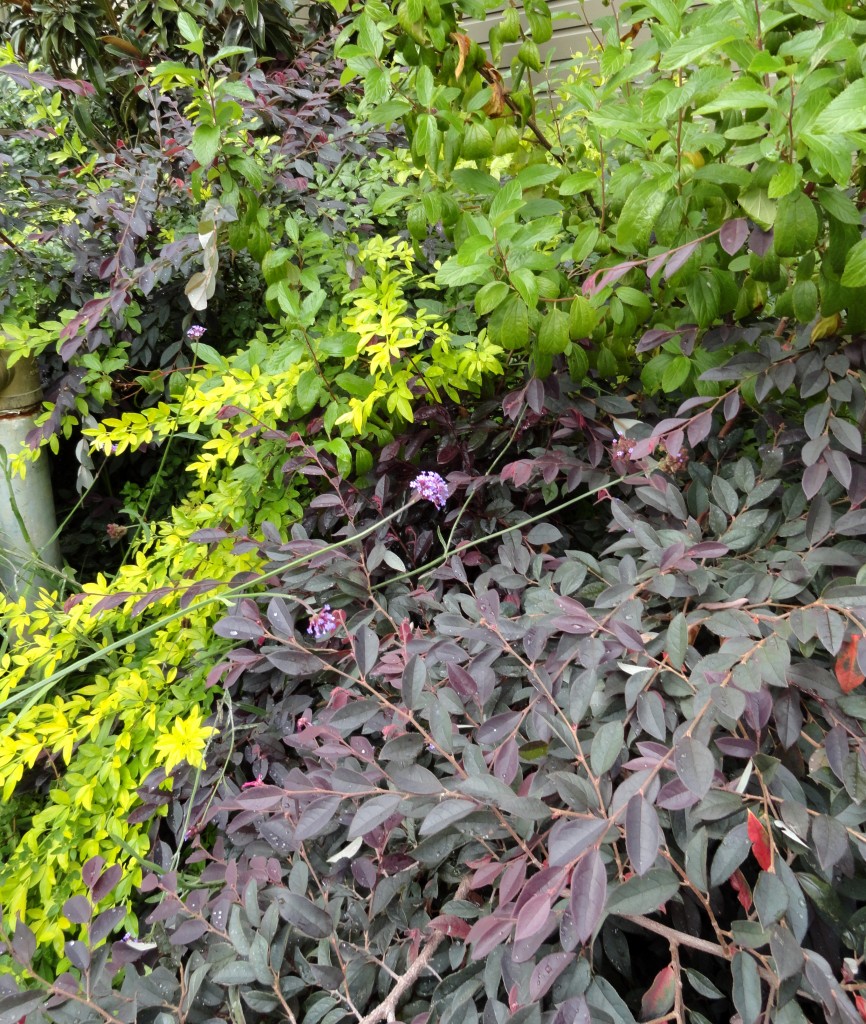 Many times I end up adding to my want list, for example why aren’t I growing Leonotis leonurus? 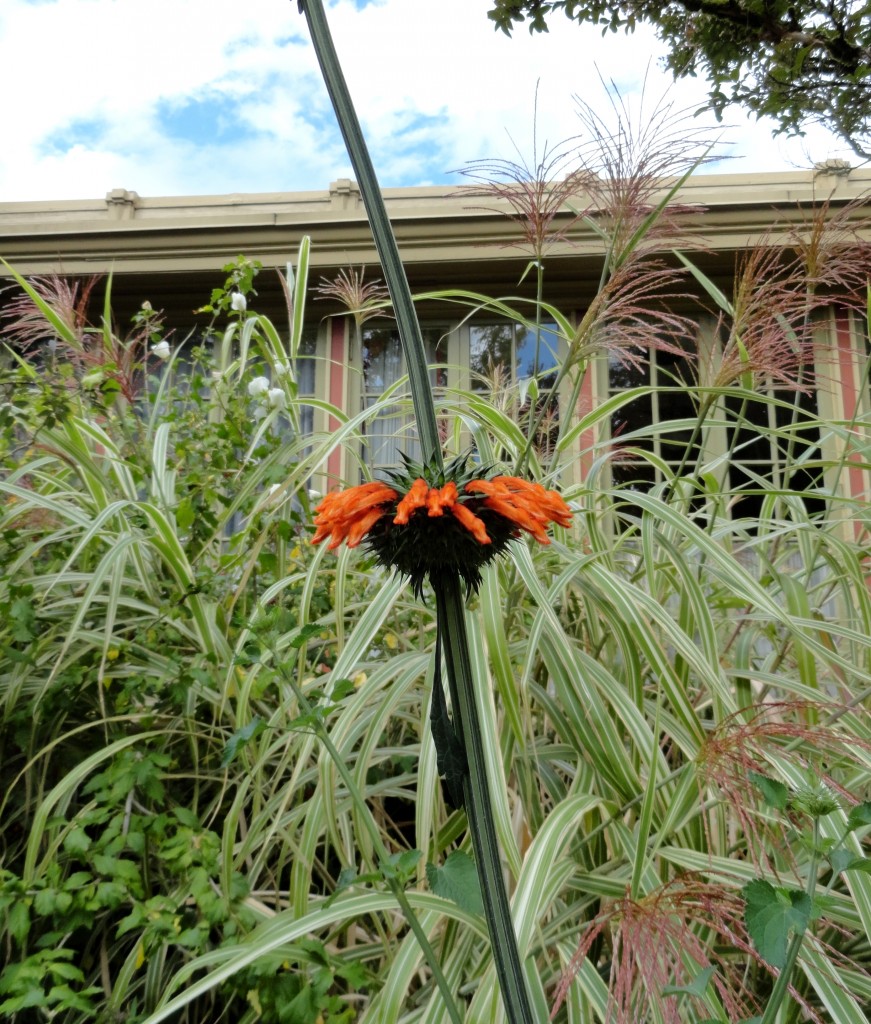 I like to leave my dried Acanthus flowers in place too, they’ve got such great structure (mine are A. mollis, update:  A. spinosus). 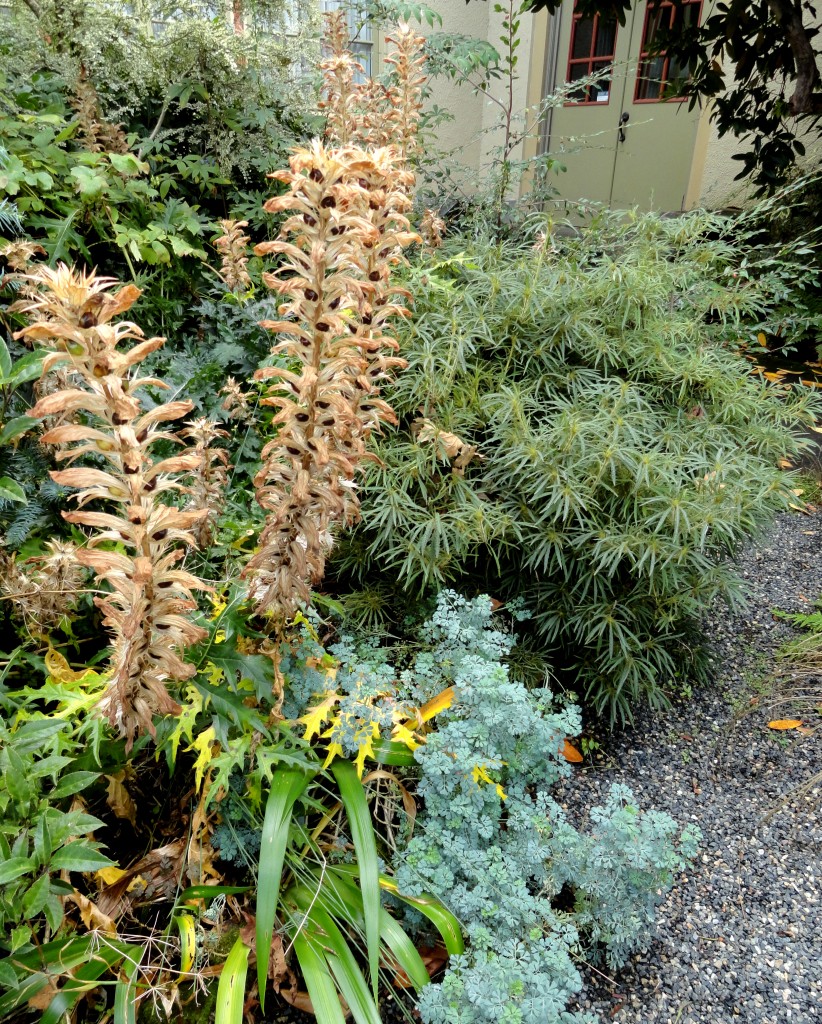 If anyone is tempted by this planting of Tetrapanax papyrifer at least they have an idea of what it can become, if allowed. 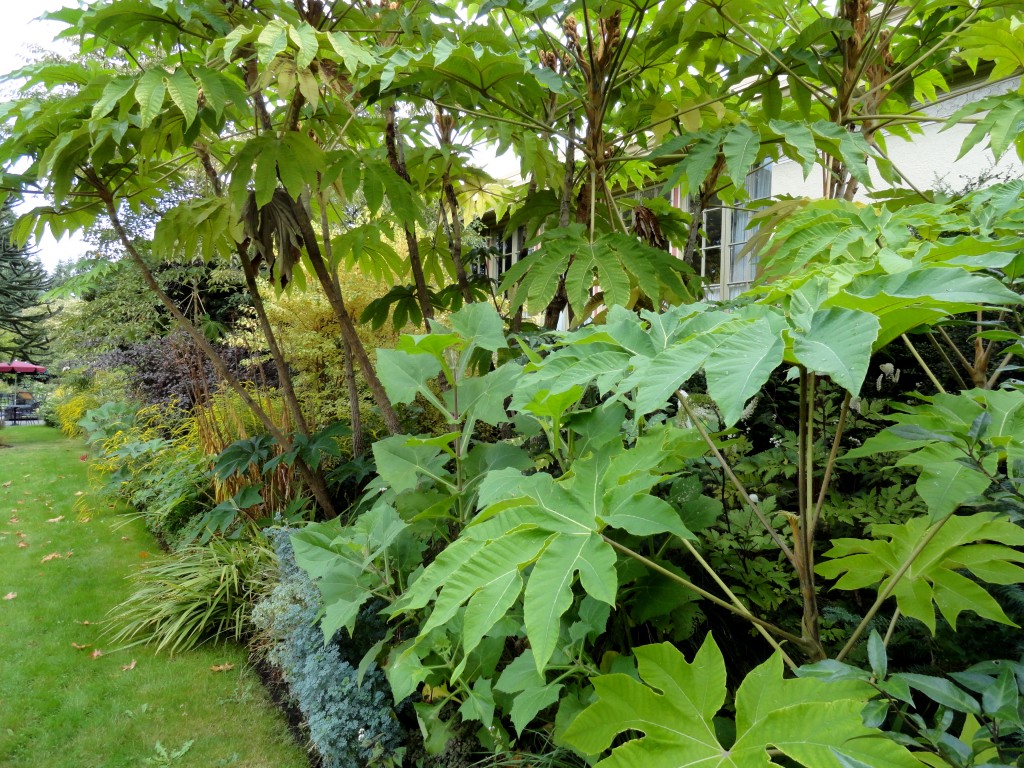 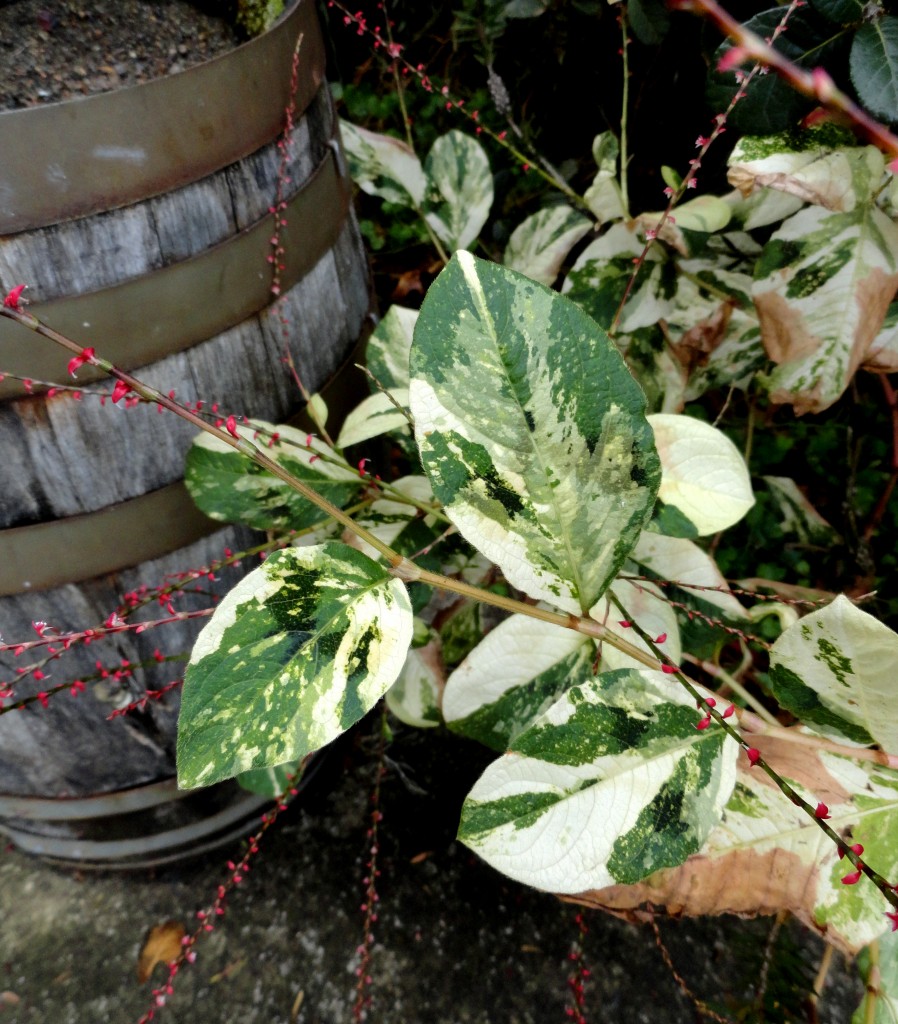 I remember the first time I saw this tree in fruit, I was blown away. 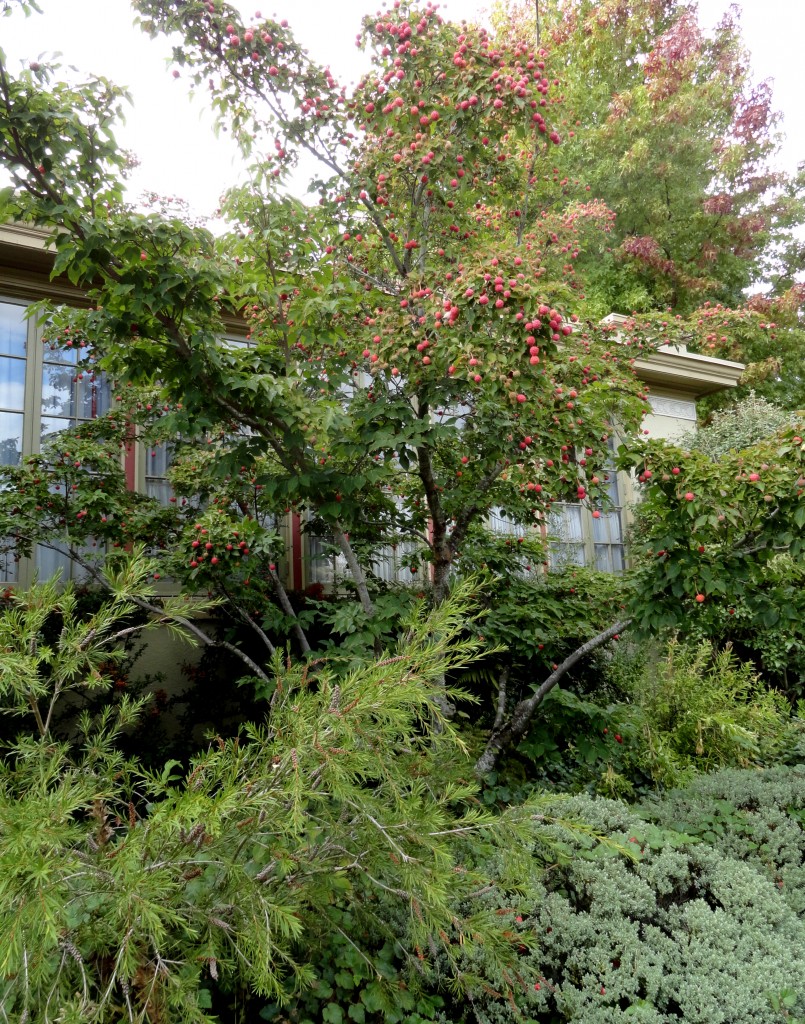 I’ve learned it’s a named variety of Cornus kousa, but that’s all I know. 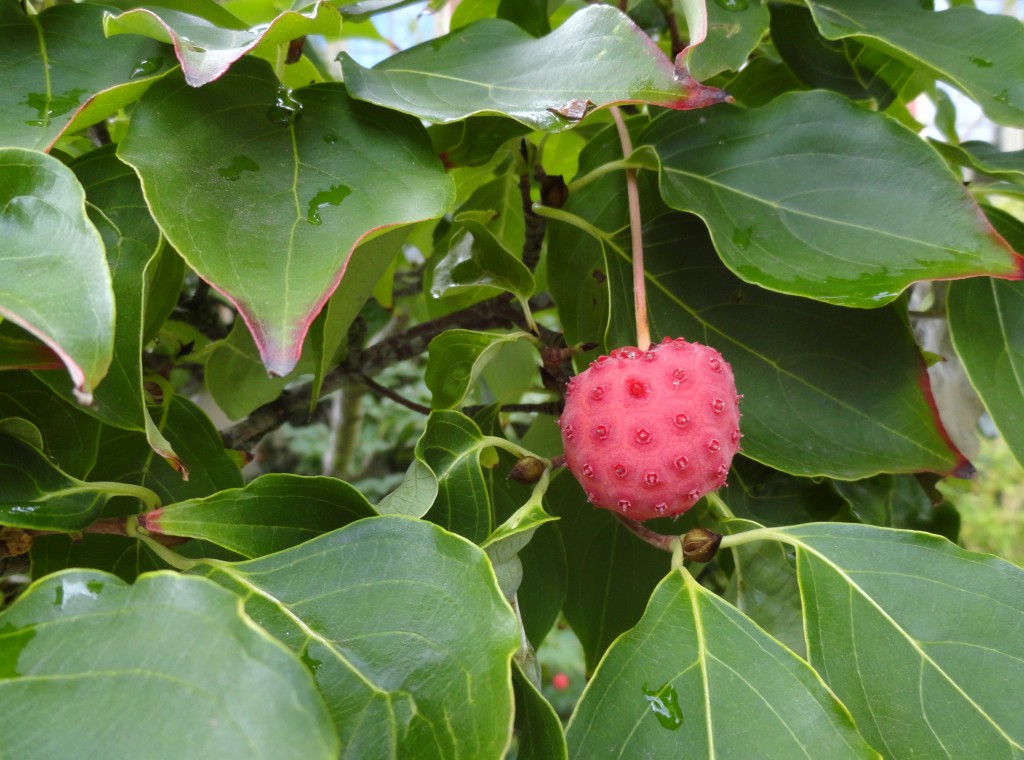 An Echium seedling, perhaps Echium pininana, I’ll be watching to see how it does over the winter. 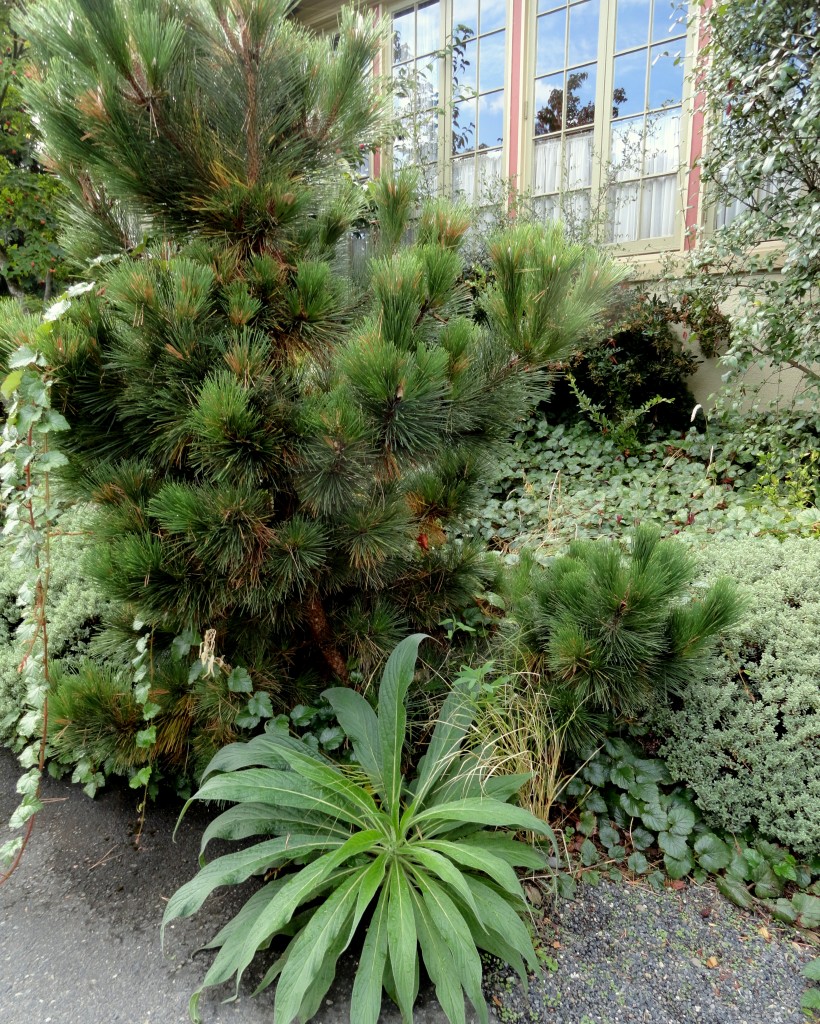 Seeing how good this planting of Mahonia eurybracteata ‘Soft Caress’ looks gave me the determination to stick with my plant a little longer. It was almost yanked out after a couple of years of non-performance, now it’s looking as good as these. 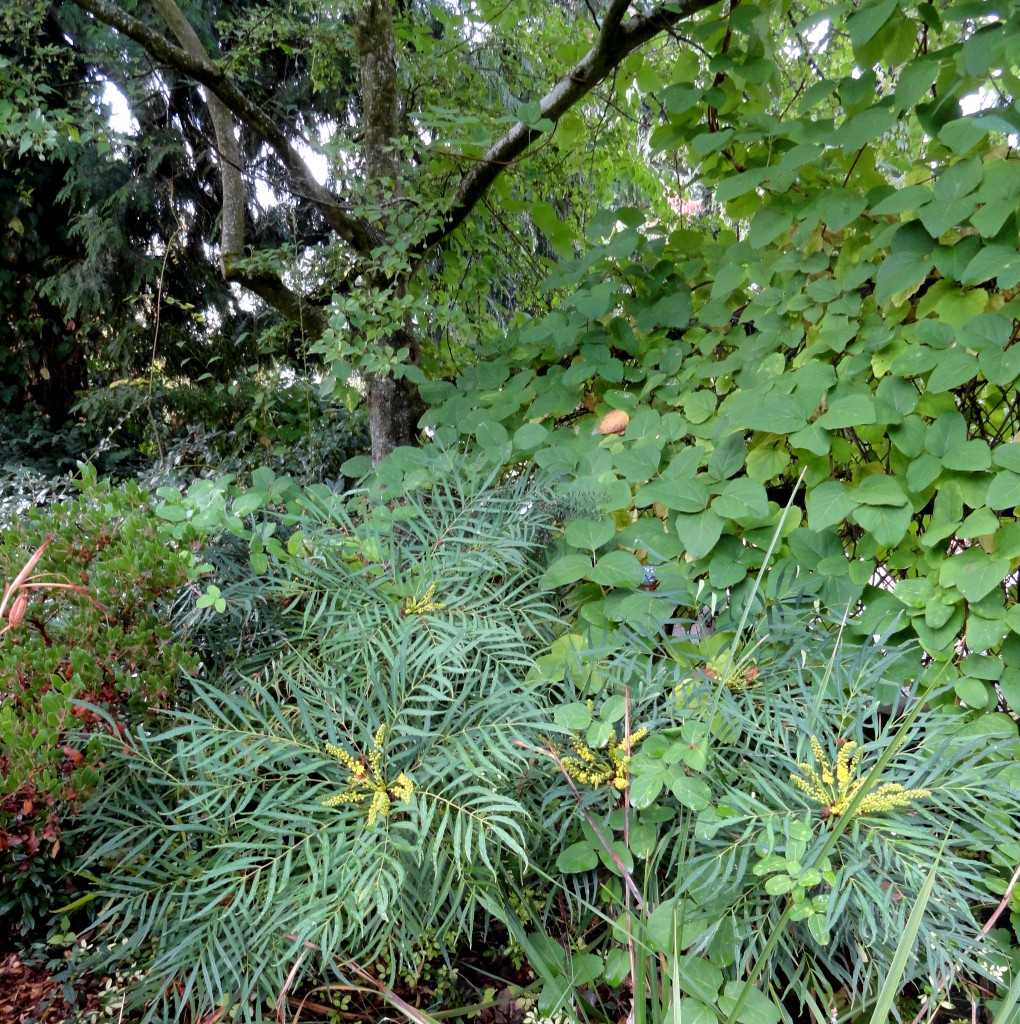 The foliage of this Hydrangea quercifolia makes me a little weak in the knees. Would it be wrong to plant a Hydrangea and cut off the flowers? 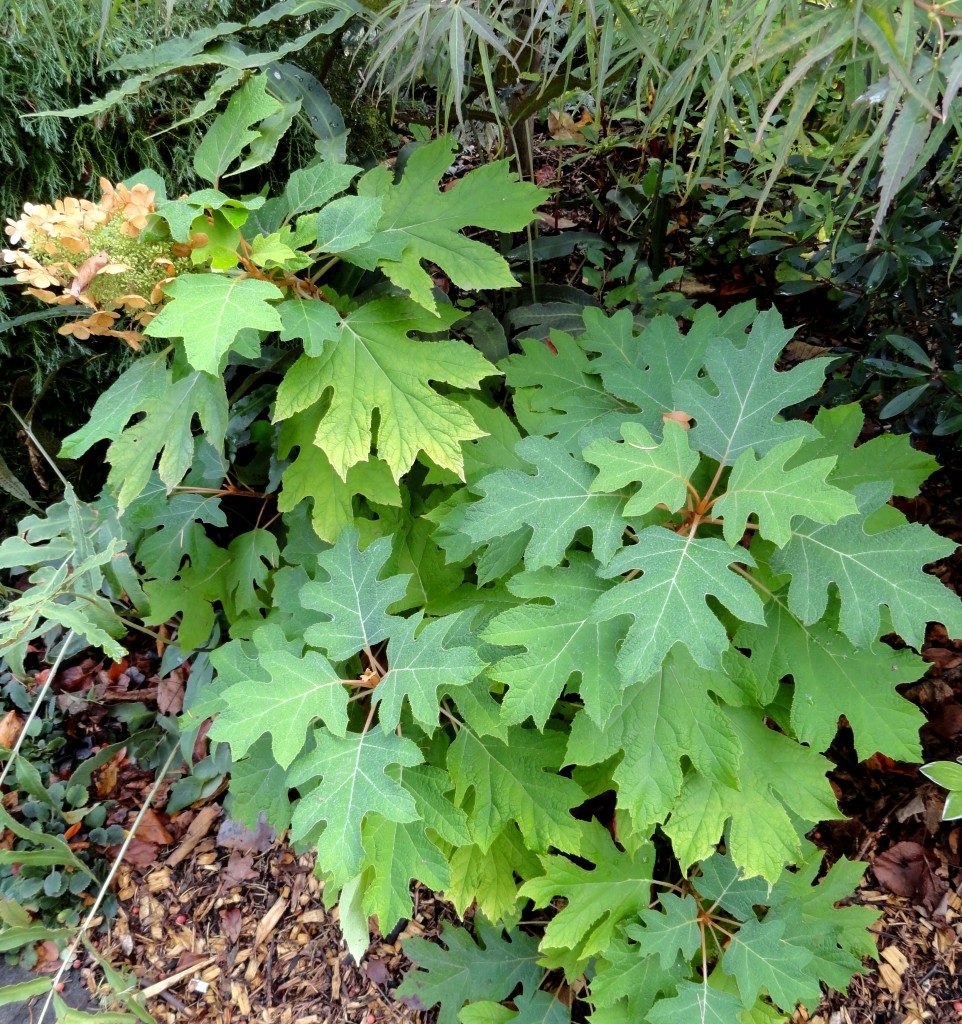 Another favorite Mahonia, this one M. gracilipes. It doesn’t photograph particularly well, but is a stunner when you come face to face with it. 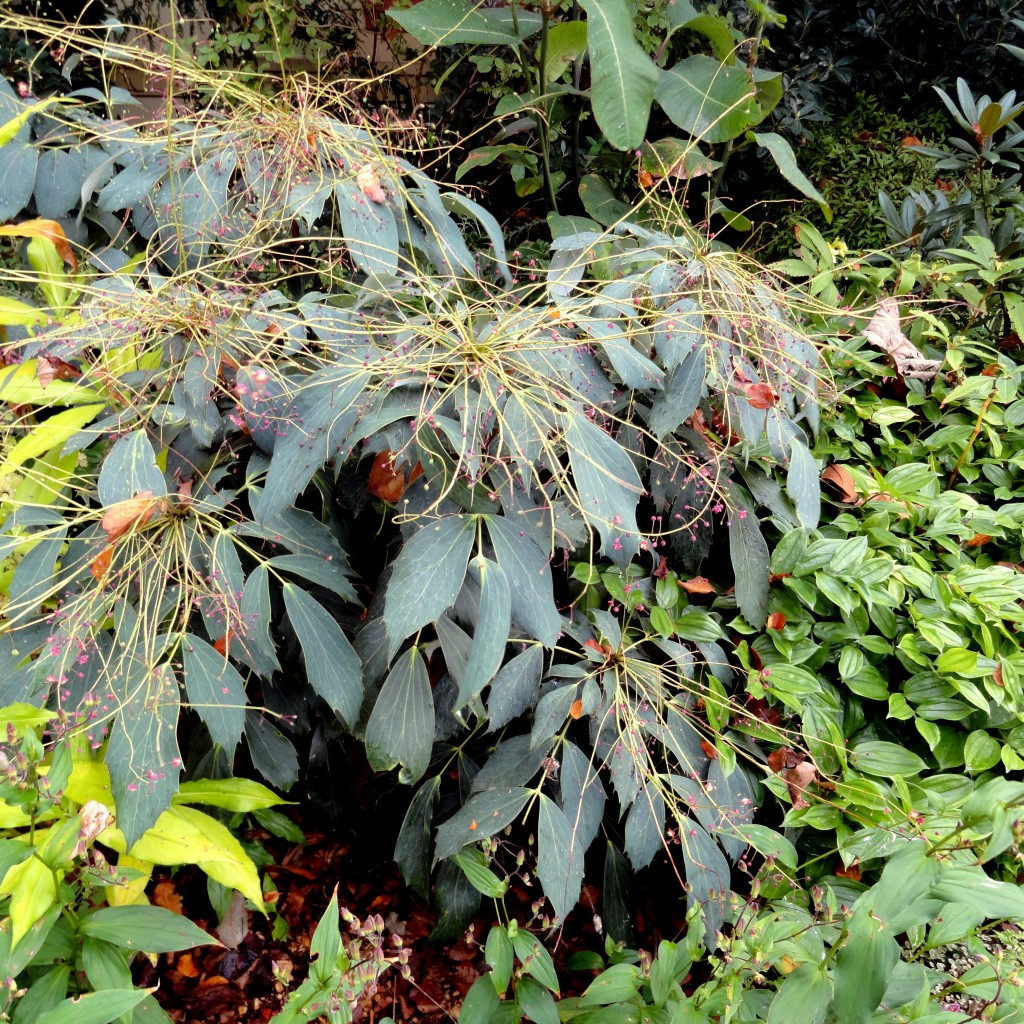 The latest swath of lawn to be removed and planted up. 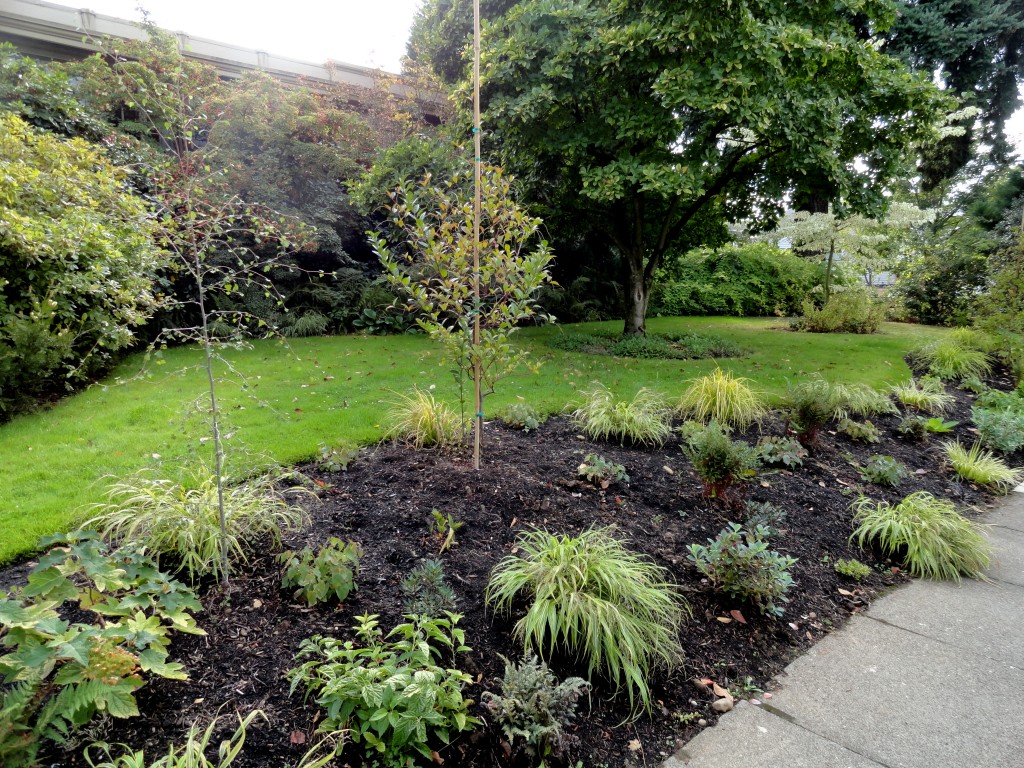 And a new discovery! Can anyone ID this guy? (update: Pachysandra axillaris) 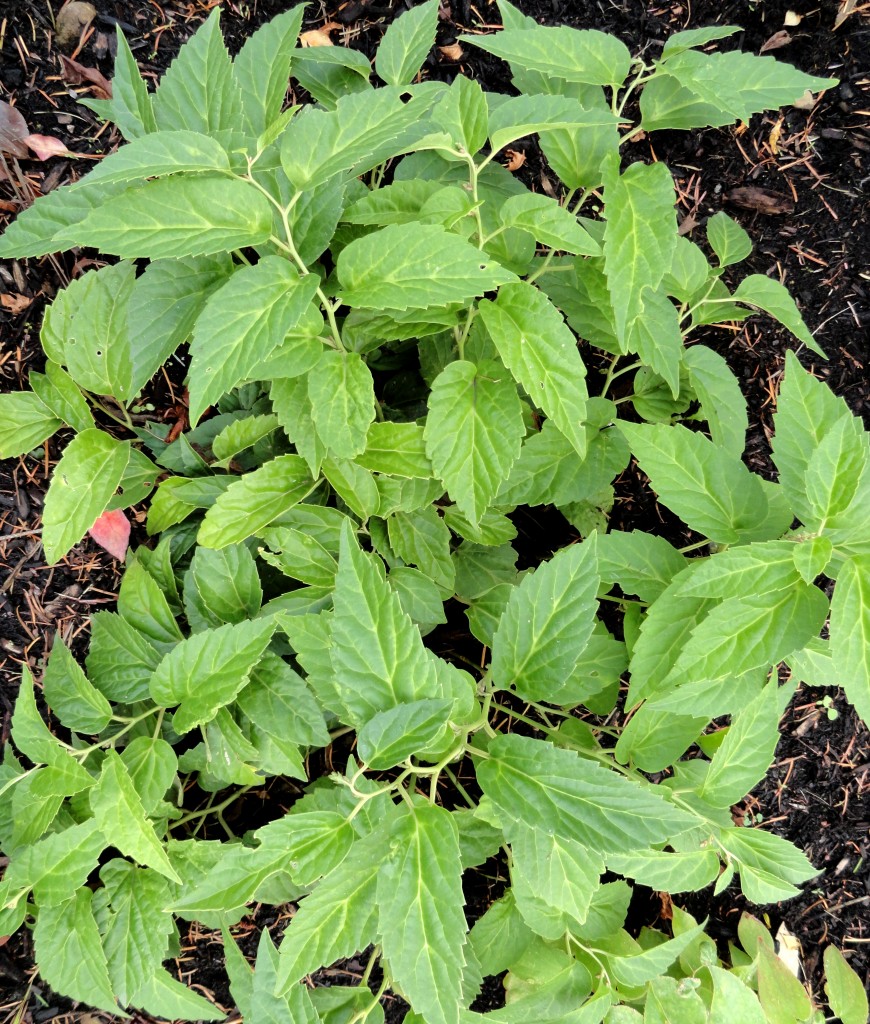 I stopped to photograph the majestic Eriobotrya japonica but was shocked by what I saw planted in front of it. 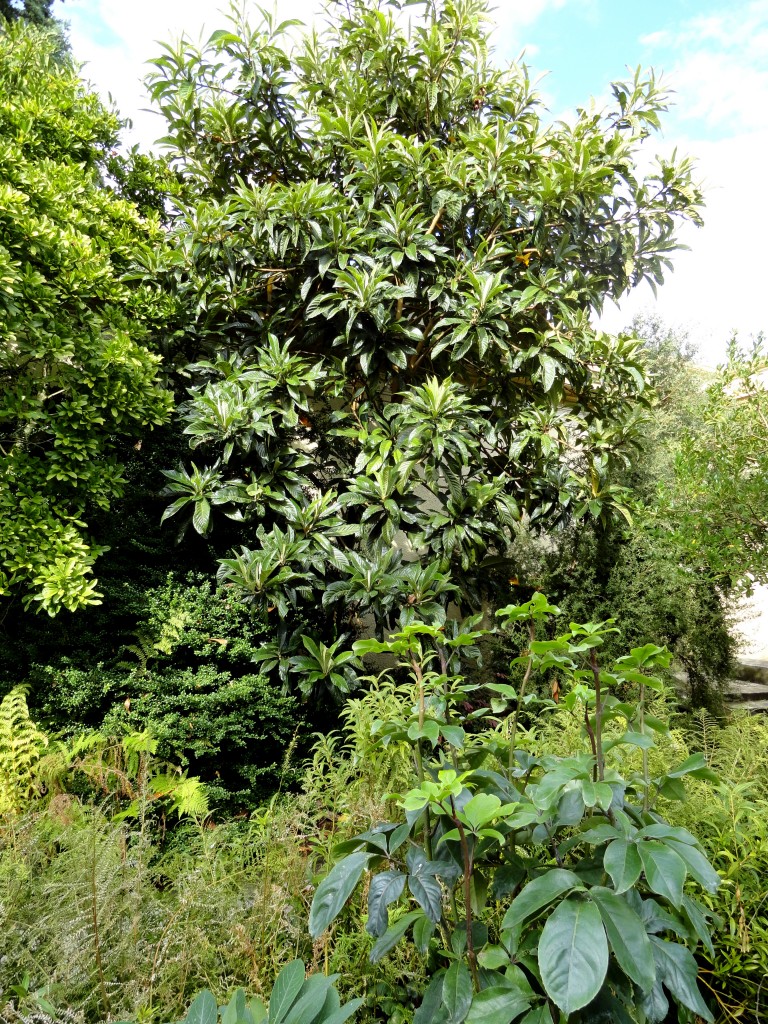 Pseudopanax laetus. The label under-which I bought mine claims it’s hardy to USDA Zone 7. Yet I was warned by many a knowledgeable friend to not put it in the ground, as it wouldn’t make it through a typical Zone 8 winter. 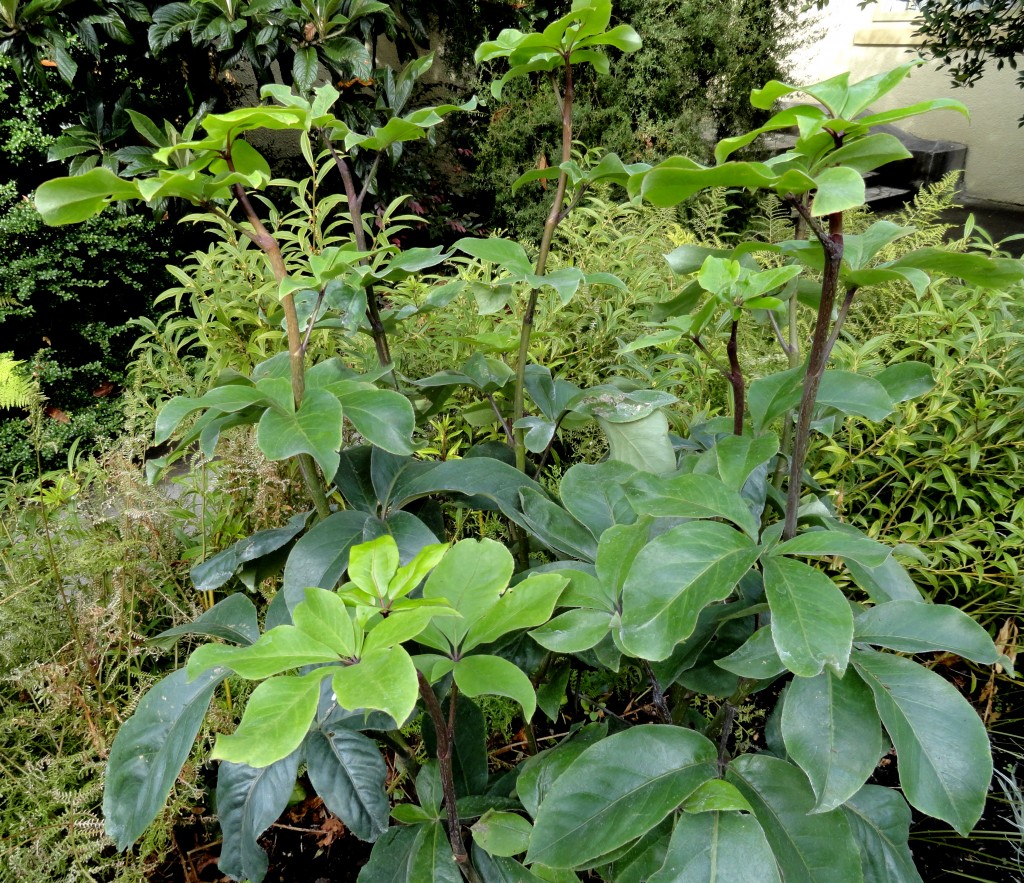 Once again the Kennedy School gardeners are doing plant trials for me! (I’ll be watching) 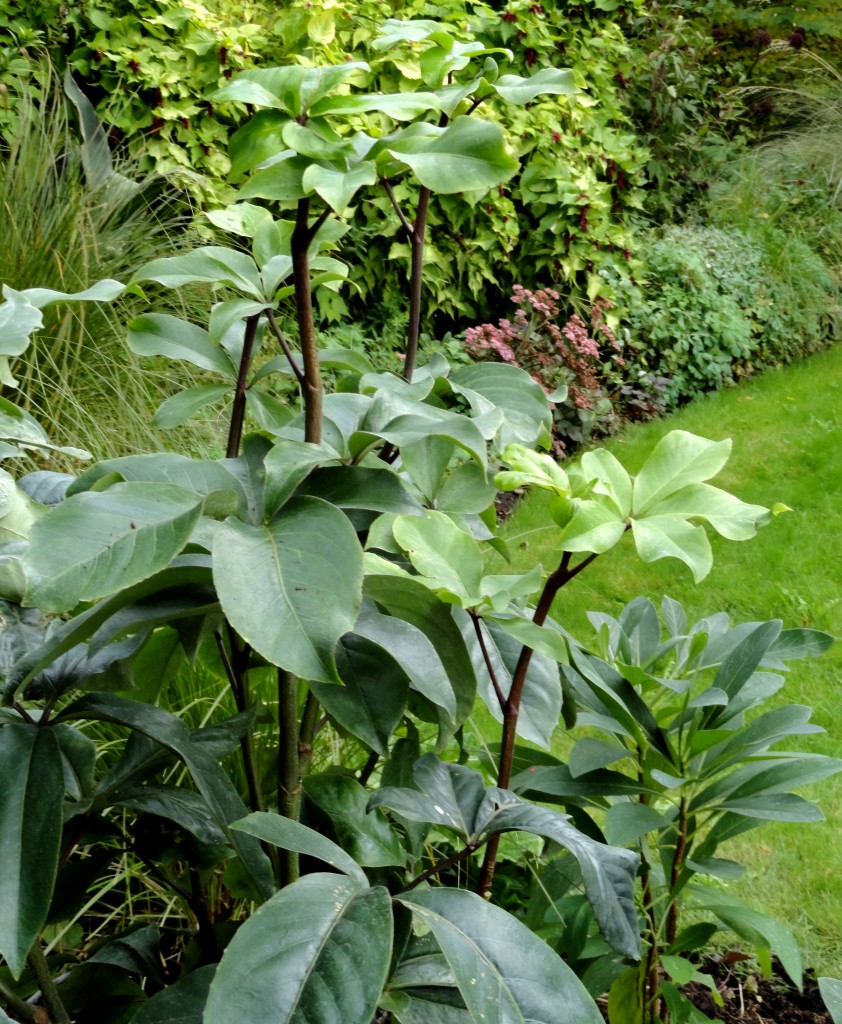 Oh, and that Loquat I mentioned (Eriobotrya japonica), there isn’t just one, but a pair. Planting to excess, it’s a style I appreciate! 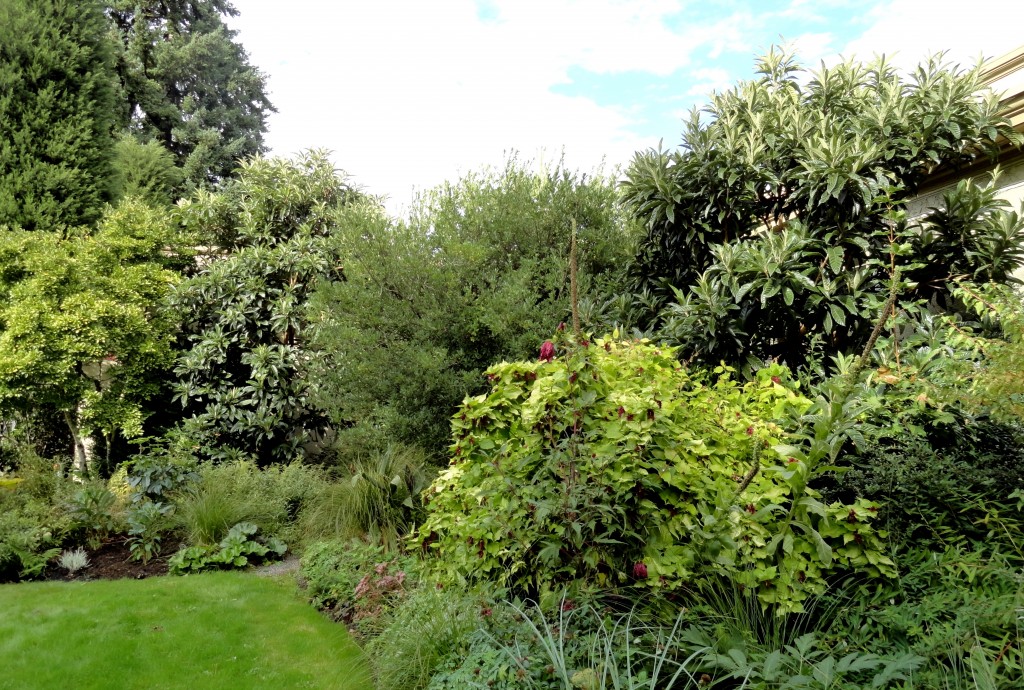 Will you think me odd if I confess to liking some Hibiscus better after the flower has fallen away? 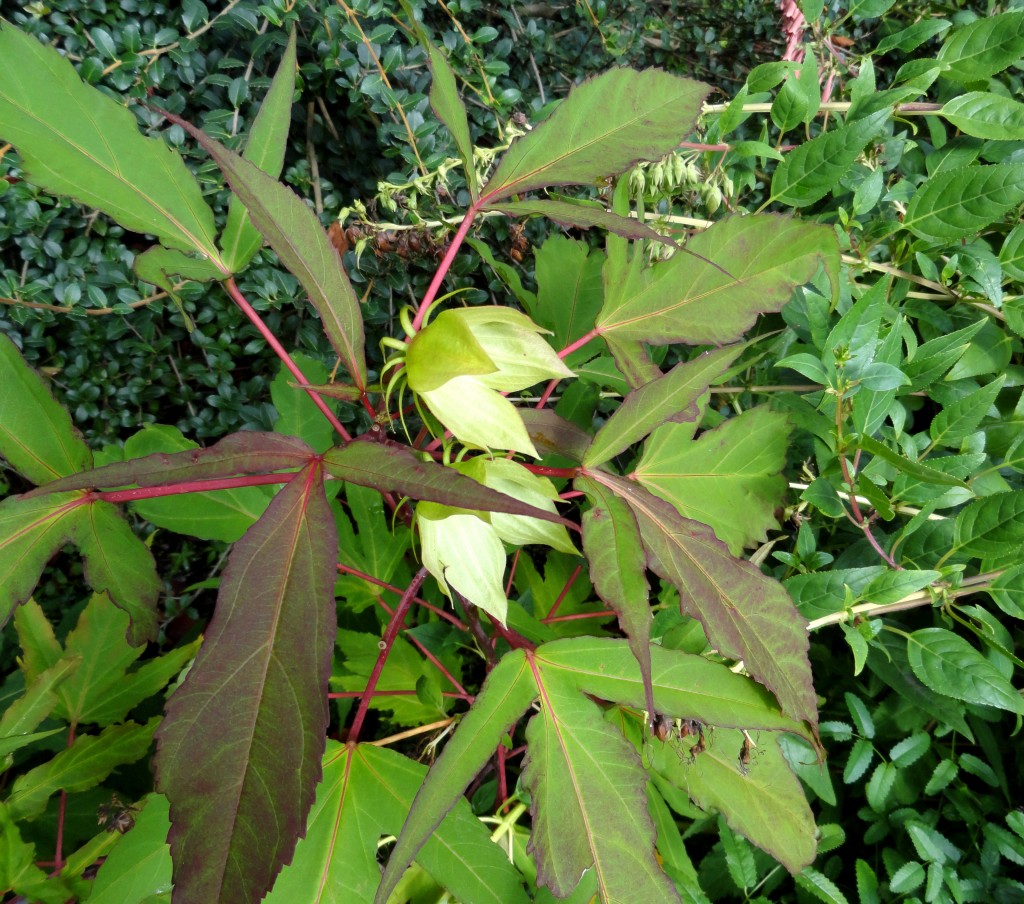 Another ID request, any idea on the small dark leaf plant tucked under the (I think) Darmera peltata? (update:  Cryptotaenia japonica f. atropurpurea) 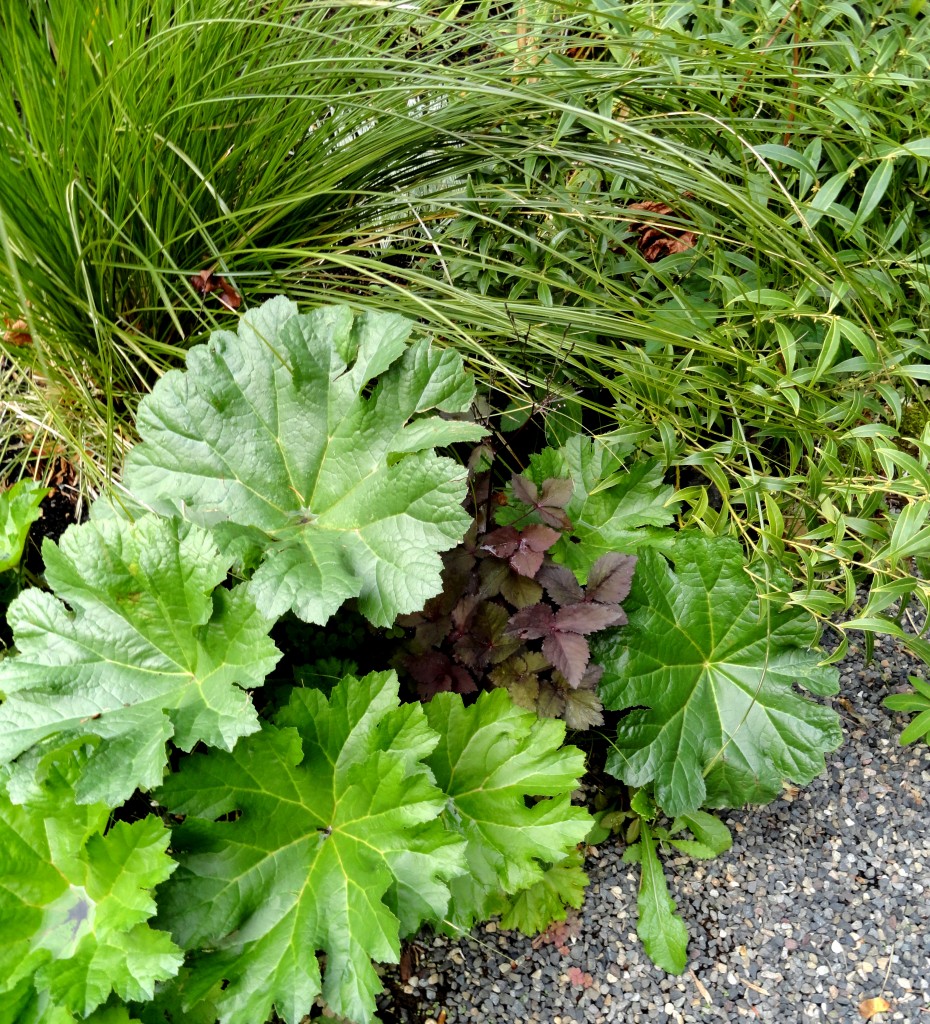 You’d think I could remember the name of this one since I lust after it frequently, and have been told the name over and over again (update: Bupleurum fruticosum. Which reminds me, there is one more lesson I learn from visiting the Kennedy School gardens. Occasionally I see a plant in it’s full grown size, and know it’s better to enjoy it here than to try and fit it into my tiny garden. 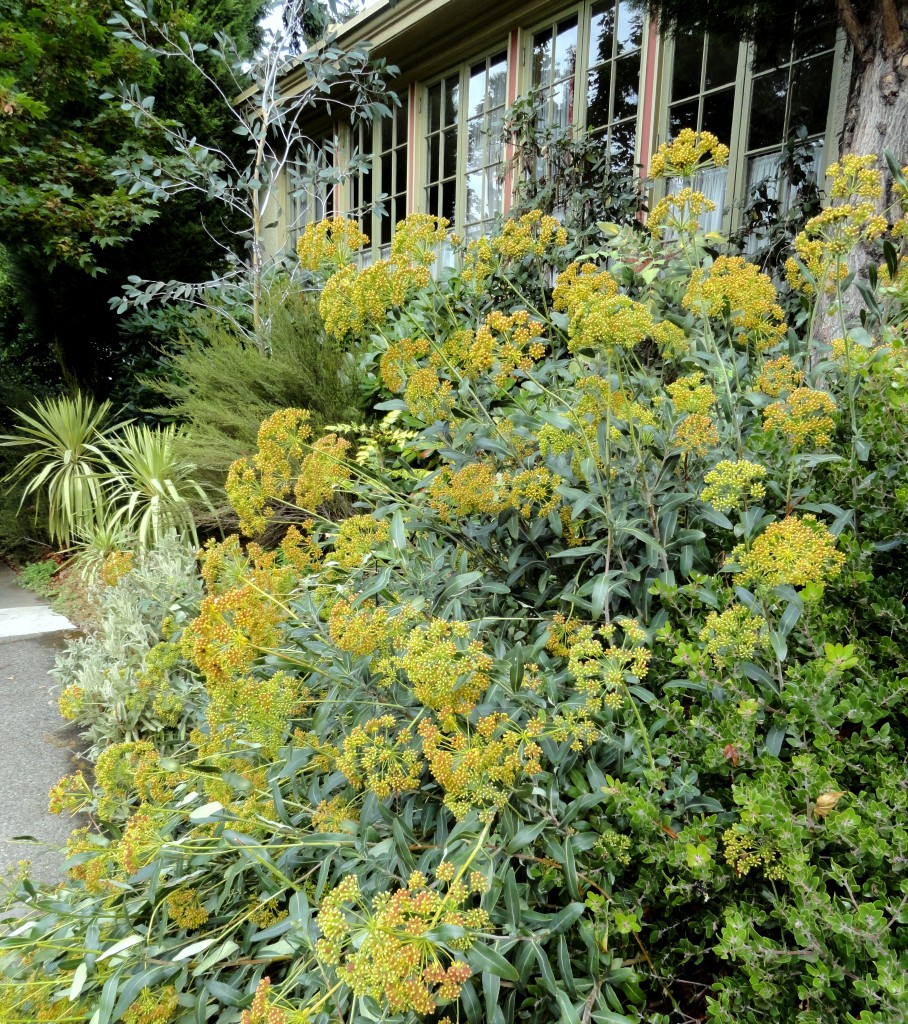