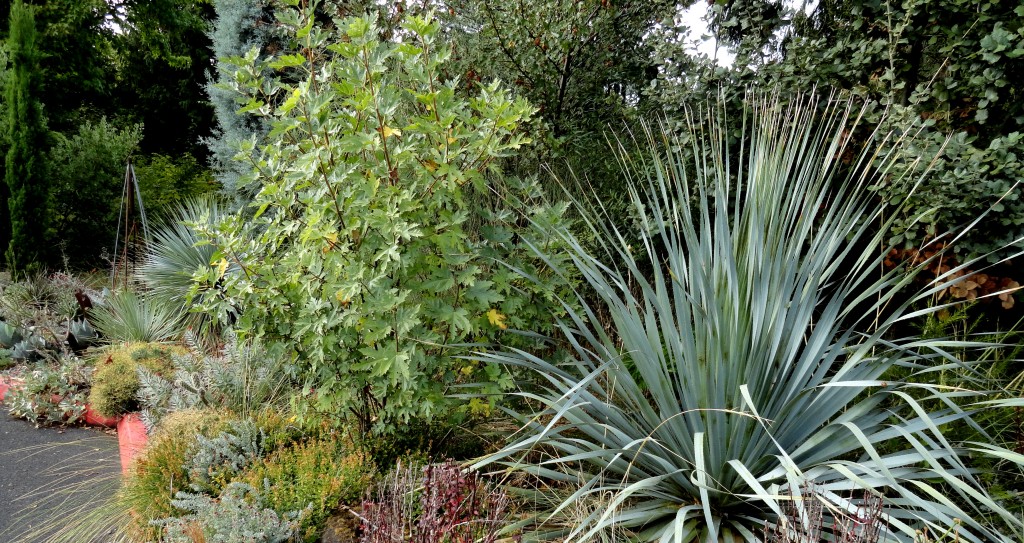 In its former life the building, and the surrounding grounds, served as an elementary school for my neighborhood. Students for miles around came to what was then known as the John D. Kennedy Elementary School – from it’s opening in 1915 – until it shut down in 1975. After its closing the building stood empty for many years, until the time came to tear it down and the neighborhood, along with those who had attended and taught at the school, together with the Portland Development Commission, fought to save it. Several proposals were considered, but the winning offer came from the McMenamins, founders of a thriving local chain of brew pubs, hotels and theaters. They started renovation in the spring of 1997 and on October 22, 1997 the doors reopened… 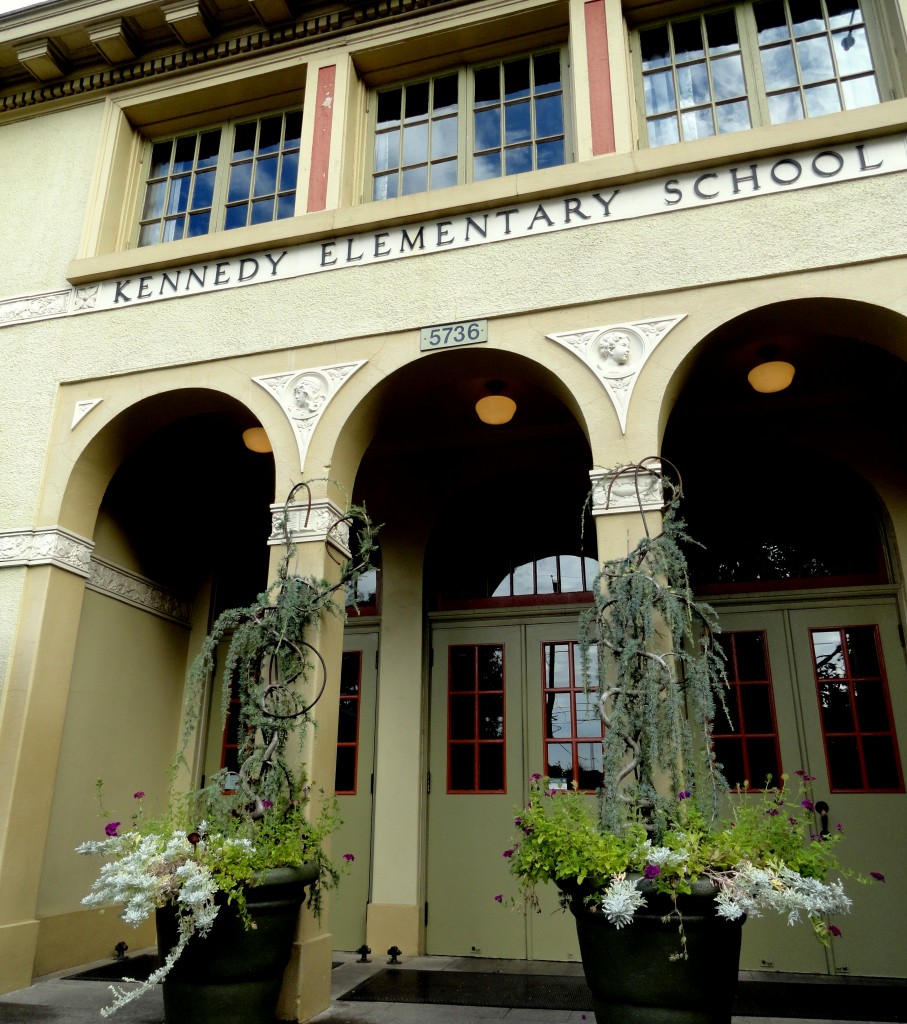 If this were a beer, food, or restaurant blog we’d be talking about what happens inside those doors, however we’re here to talk about the gardens. And oh what gardens the McMenamins create! Or rather their team of talented gardeners create, the McMenamin brothers however see the value and fund the endeavors – for that I am eternally grateful. 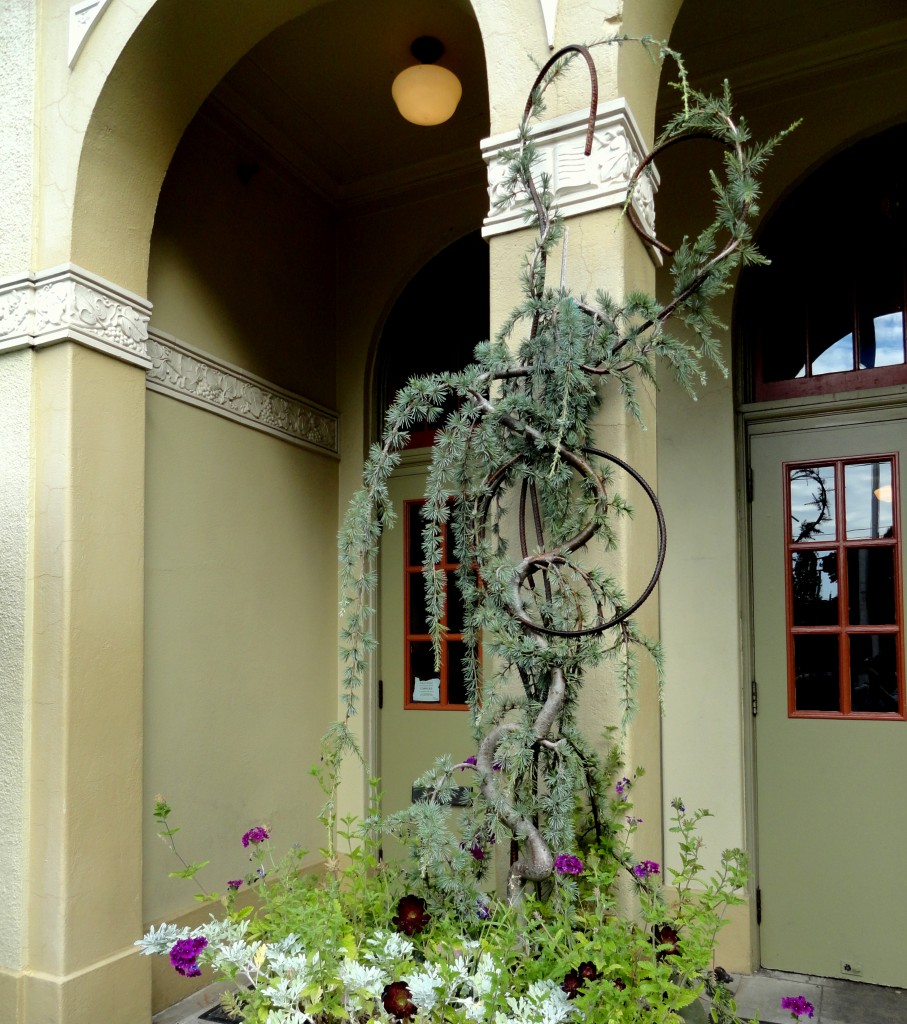 I live just a few blocks from the Kennedy School and take frequent walks around the garden, even after 10 years I am still discovering new things. For example this pair of ginormous planters flanking the front entrance was recently planted up with contorted Blue Atlas Cedar, trained around bent re-bar. 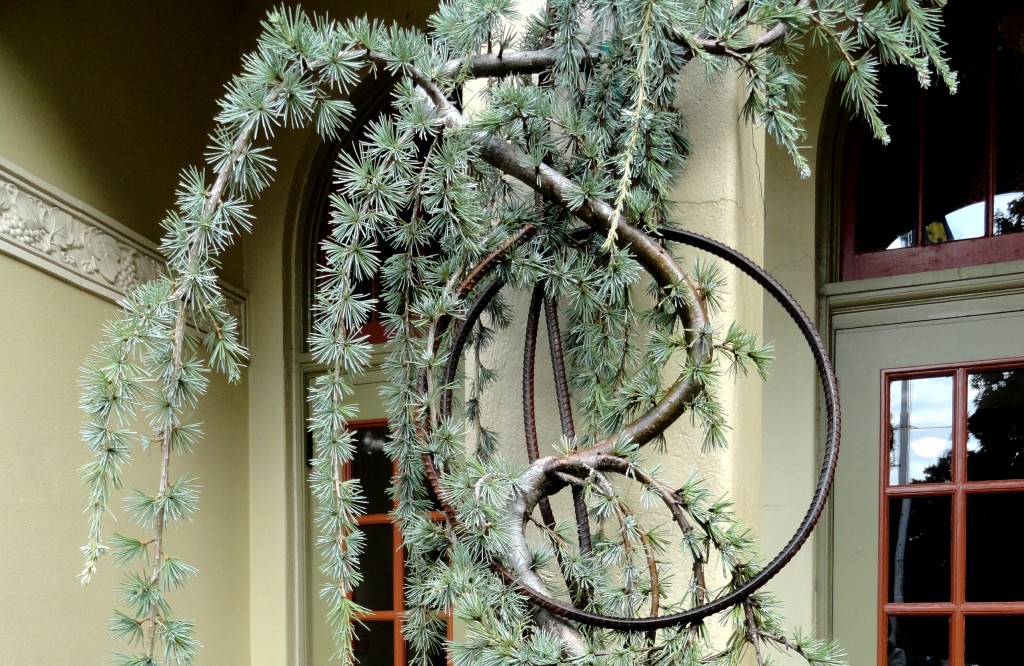 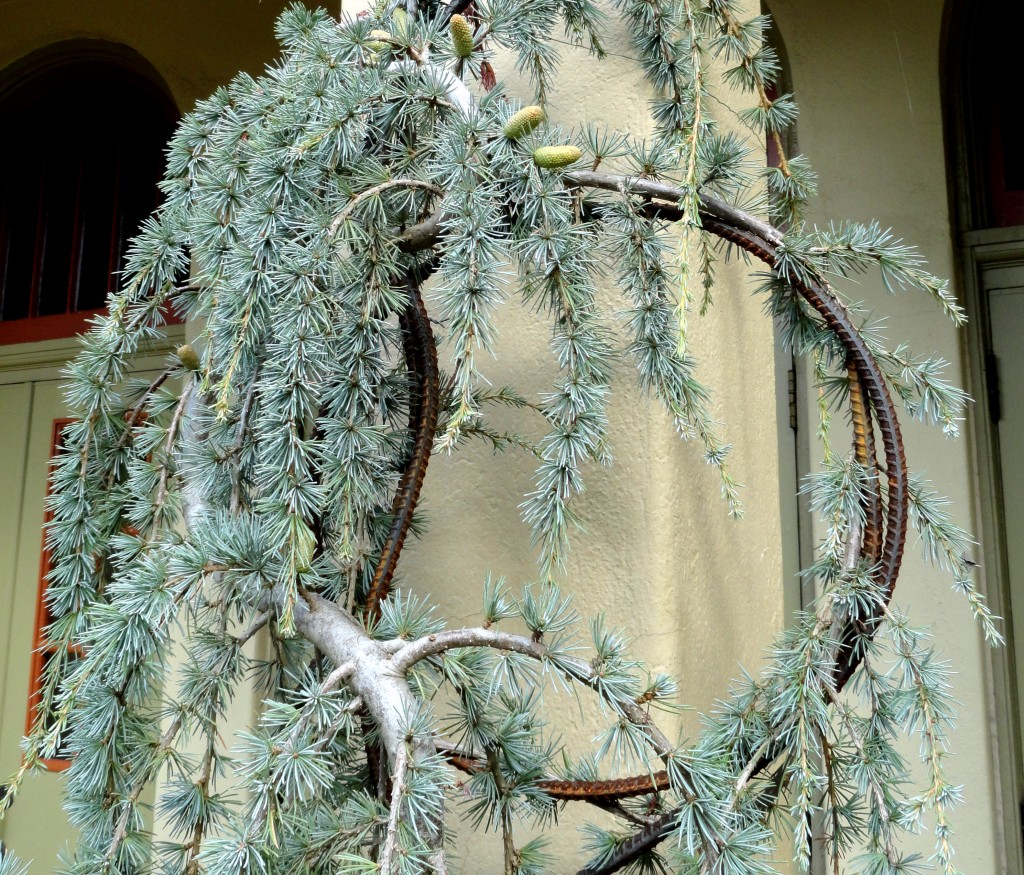 Surely you noticed the cones?

The day I visited each entry (there are multiple) was festooned with a bunch of cut flowers. Had there been a special gathering? Or had the gardeners just felt like celebrating the first day of Autumn? 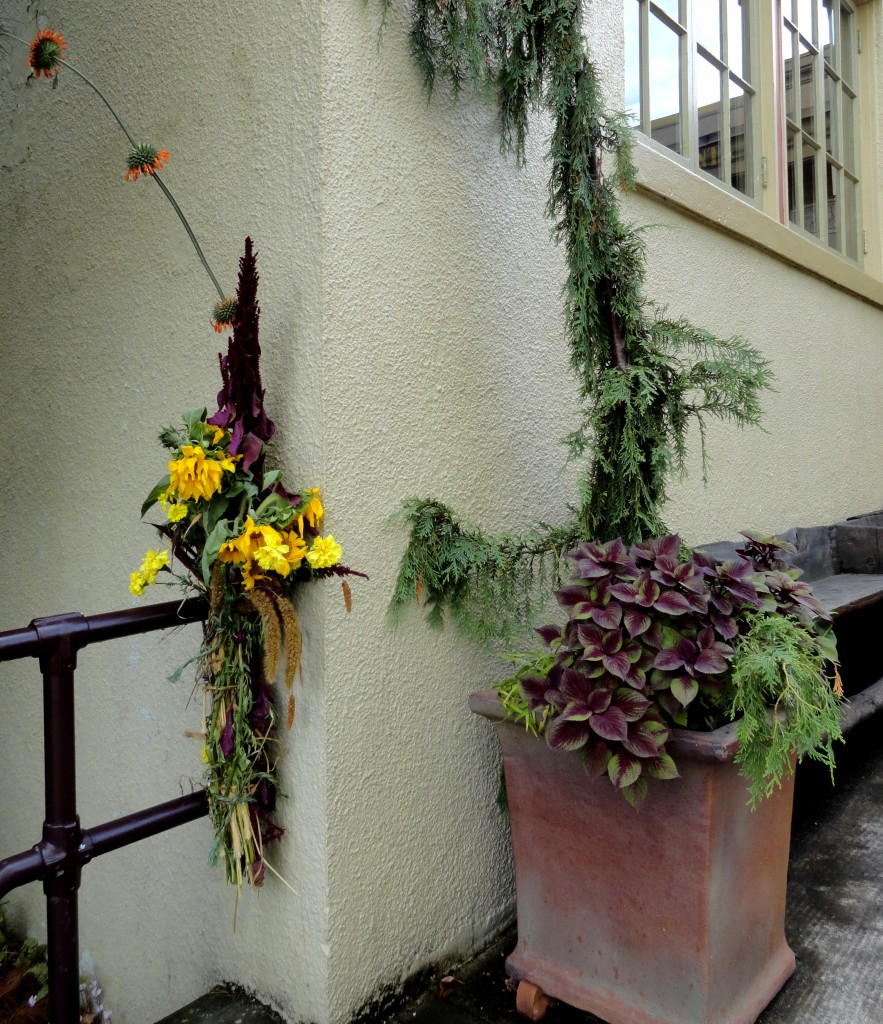 Either way I loved the extra effort. 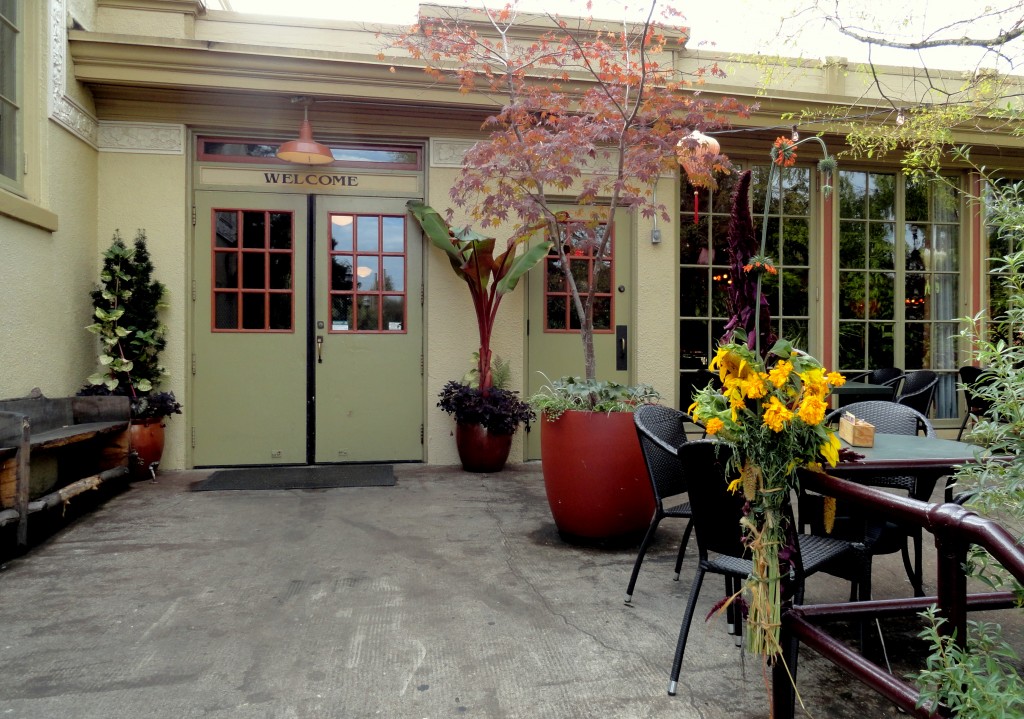 Everyday should be celebrated. 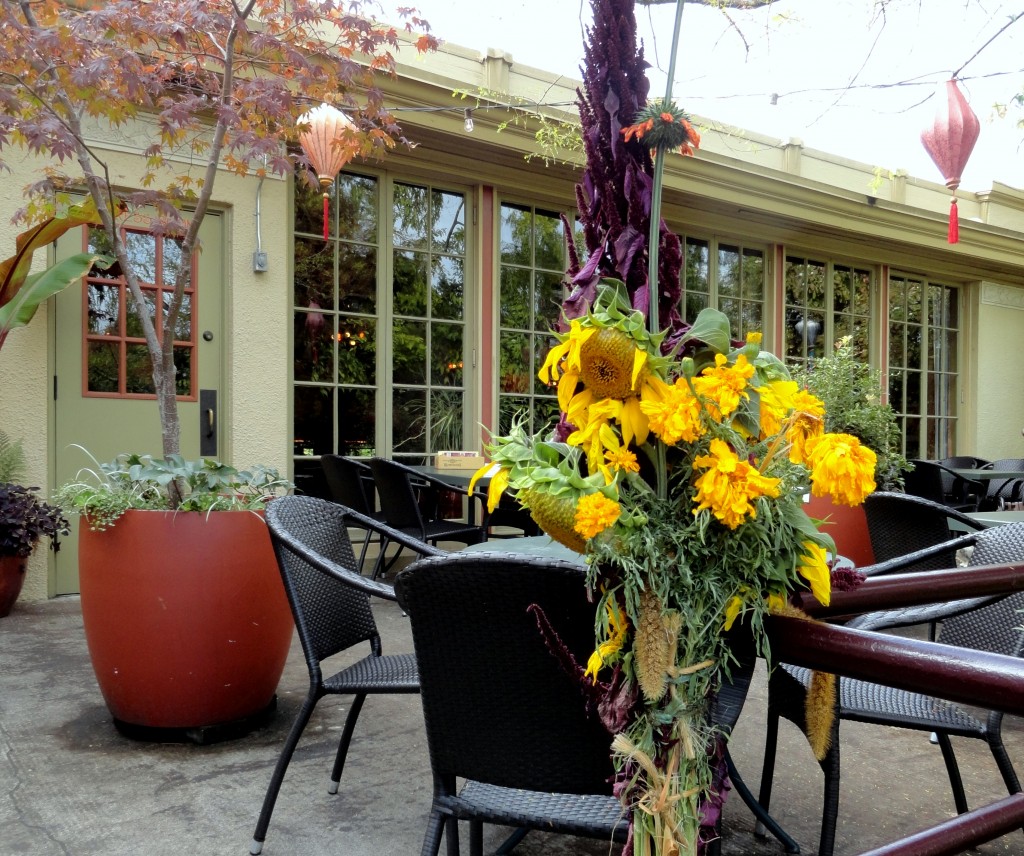 Next week I’ll share the the woody and herbaceous borders which surround the school, but today I want to focus on the gravel garden. For many years this area was a drive-through entry into the parking lot. The neighbors complained about traffic noise and disruptive headlights so whatta ya know, it was turned into a planting opportunity. Built-up gravel berms provide the drainage these special plants require (read a little about the building this garden here). 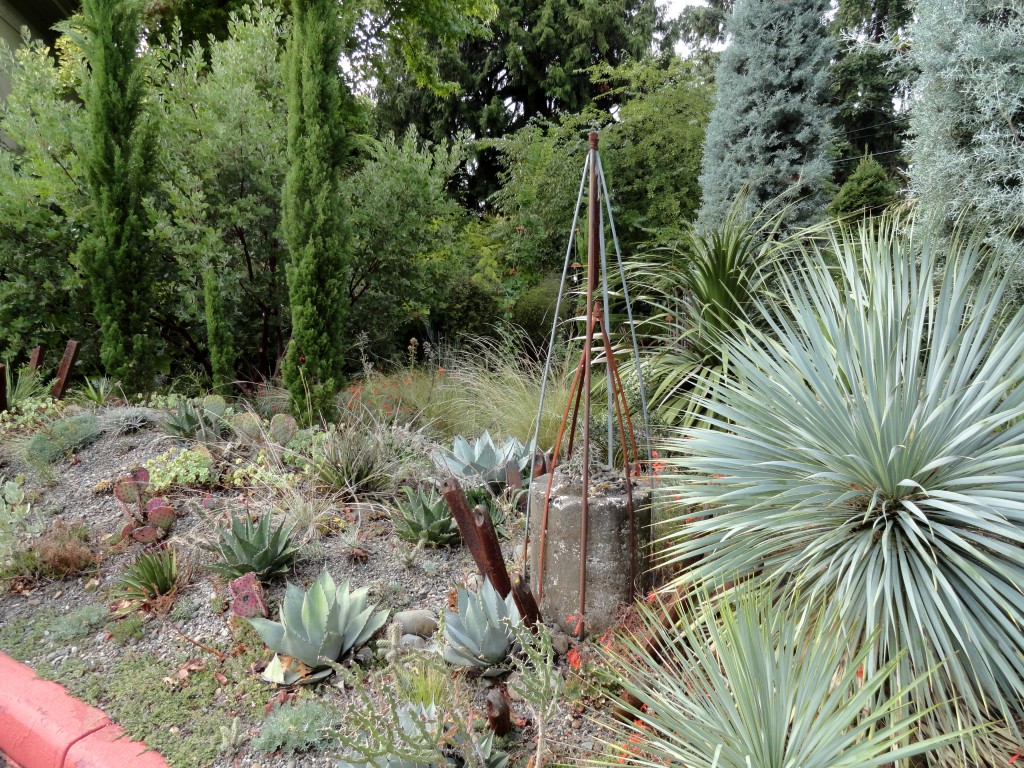 Pieces pulled from ongoing renovations inside the building become garden art and planters. 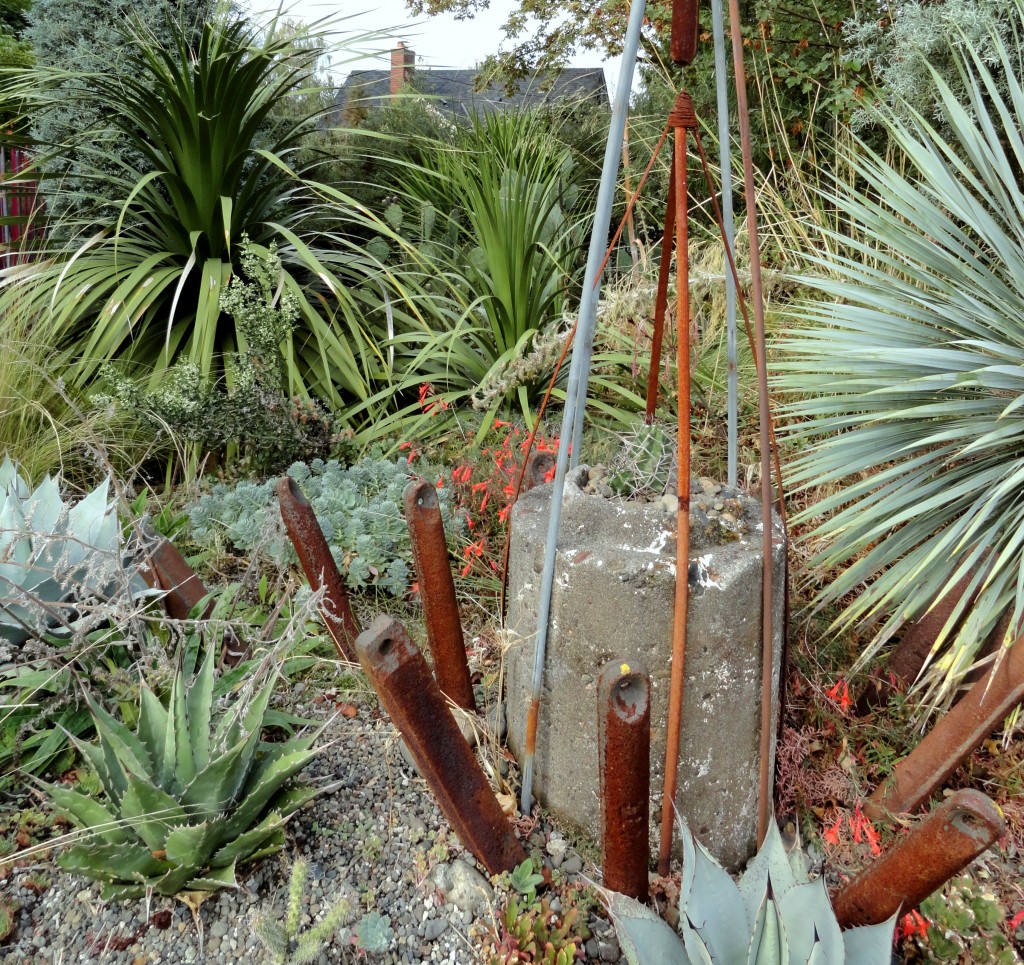 Naturally I regularly peruse the plantings to see how things are fairing. Winter cold and wet, summer heat and dry…through it all the plants are there for me to learn from. The day I spotted this gorgeous variegated Agave parryi I think I actually gasped. Isn’t it beautiful? 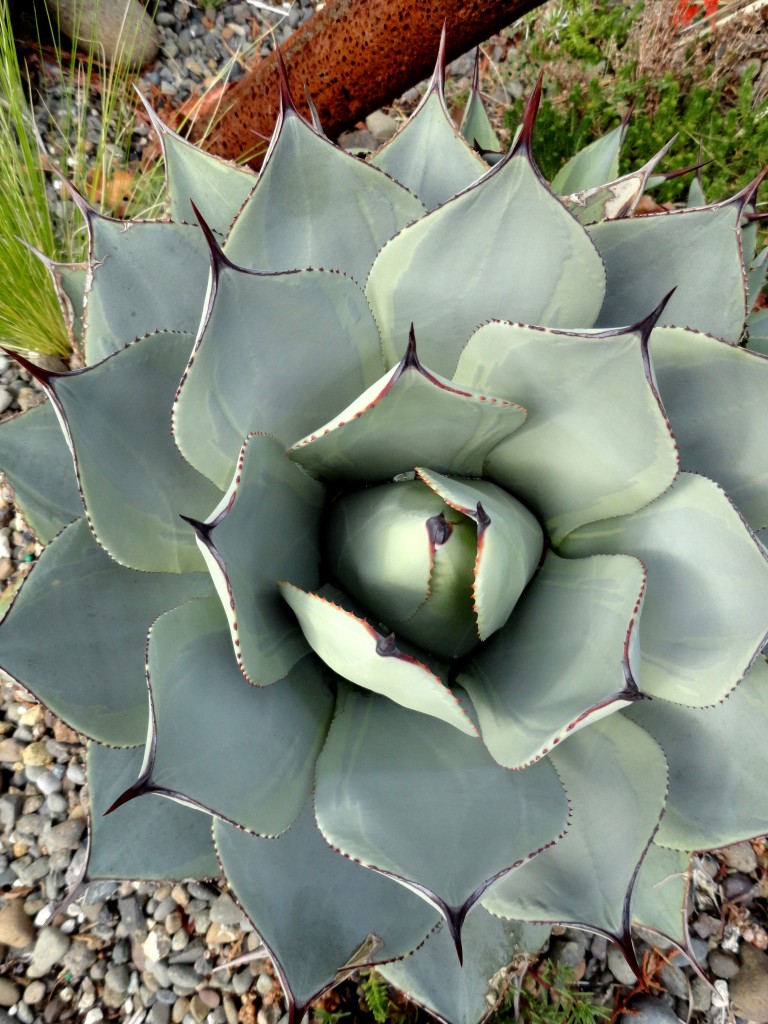 On the left is what I think may be Ficus afghanistanica ‘Silver Lyre’ (looking less silver because of a long summer), and on the right the largest Dasylirion wheeleri I know of here in Portland. It is inspiring. 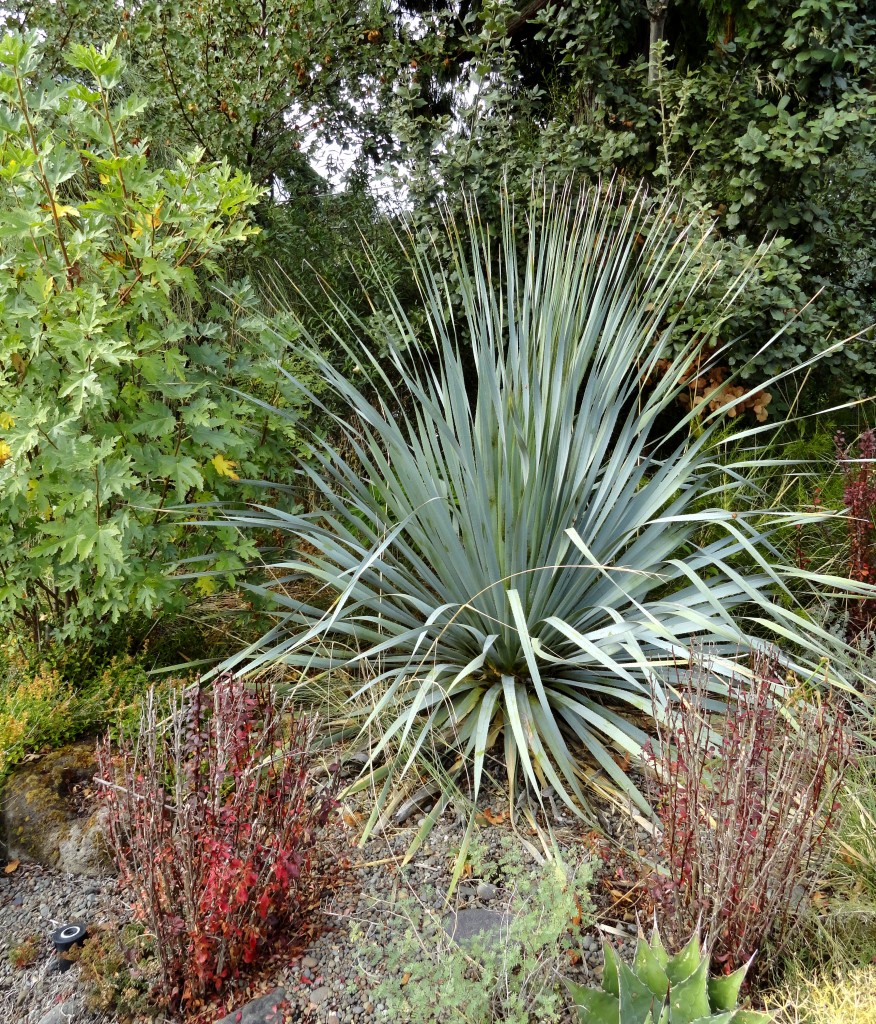 As is the fig. 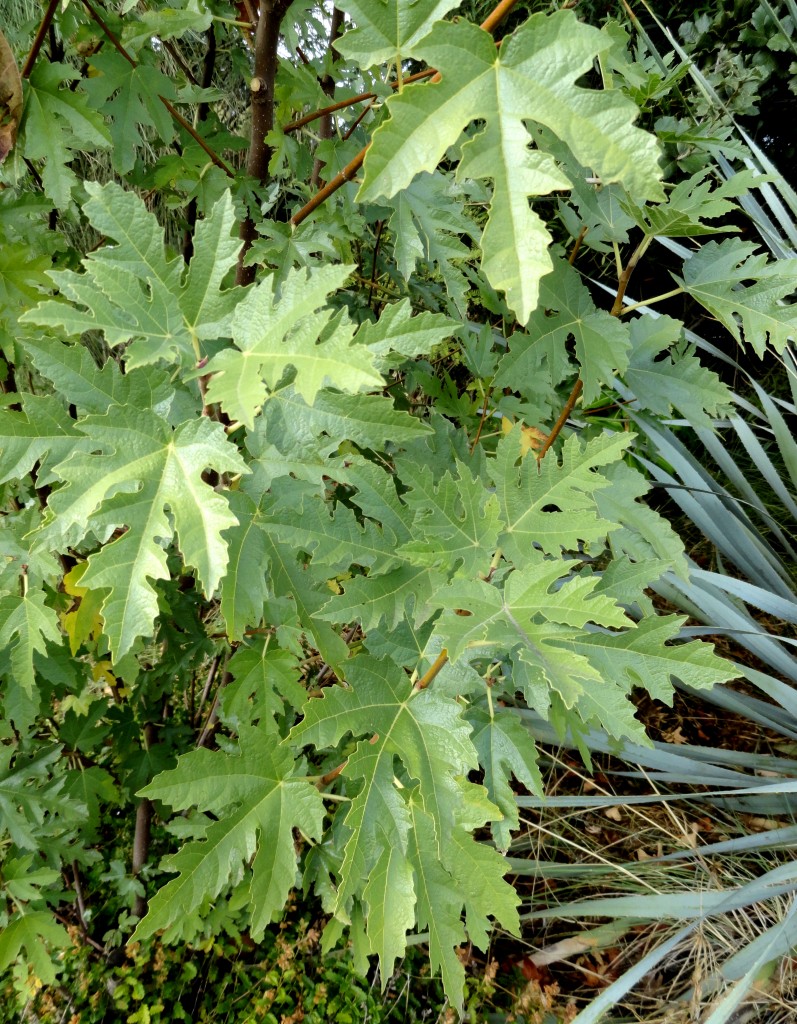 This beauty is one of the first Nolina that I became aware of, I believe it’s Nolina ‘La Siberica’. After seeing it here, and at The Whole 9 Yards, I knew I had to have , now three… 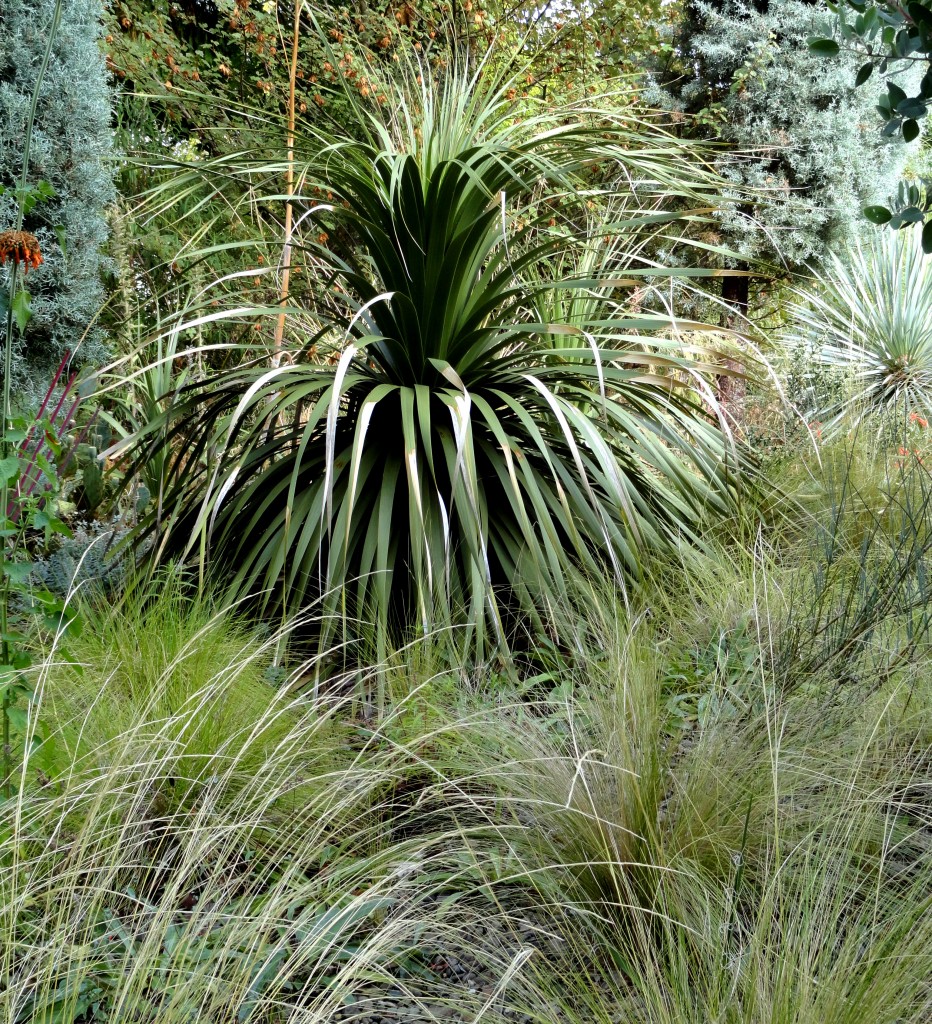 And this was one of the first ever Arctostaphylos that really caught my attention. I have no idea which one is is, but can tell you that my Arctostaphylos x ‘Austin Griffiths’ was bought in a large part because it reminded me of this plant. 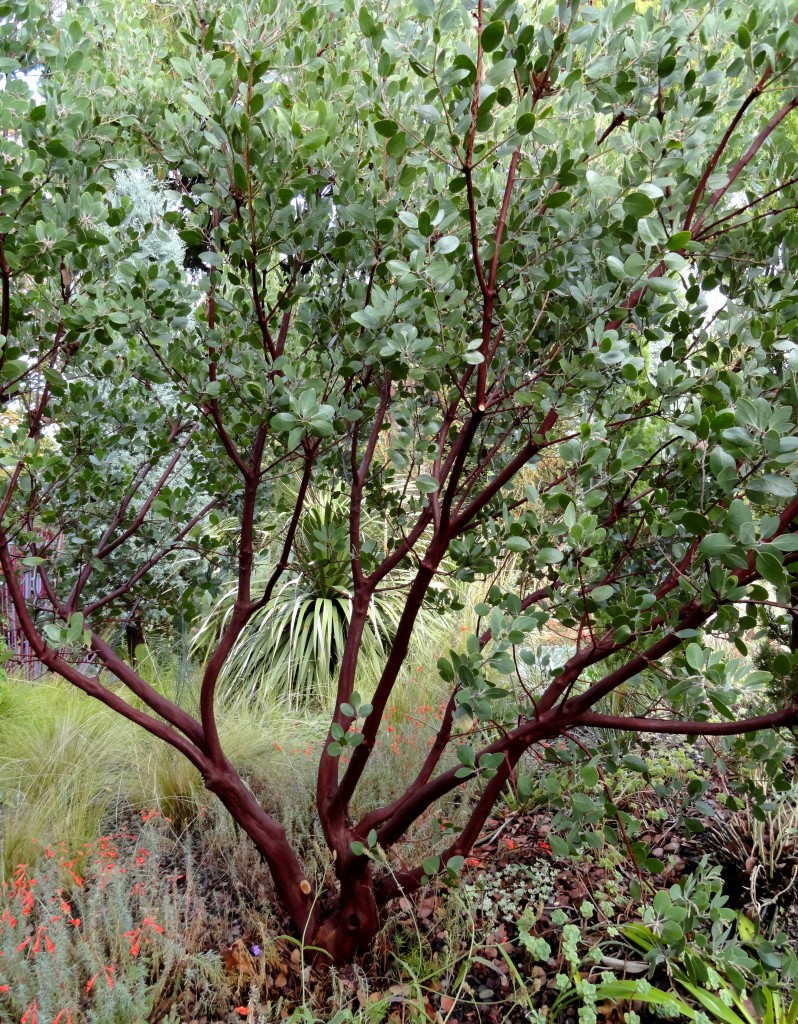 Are you getting the idea this isn’t just a garden, but one that pushes the envelope a bit and showcases the unexpected? You’re right. I can’t wait to show you more next week!