plants that go bang, for you buck 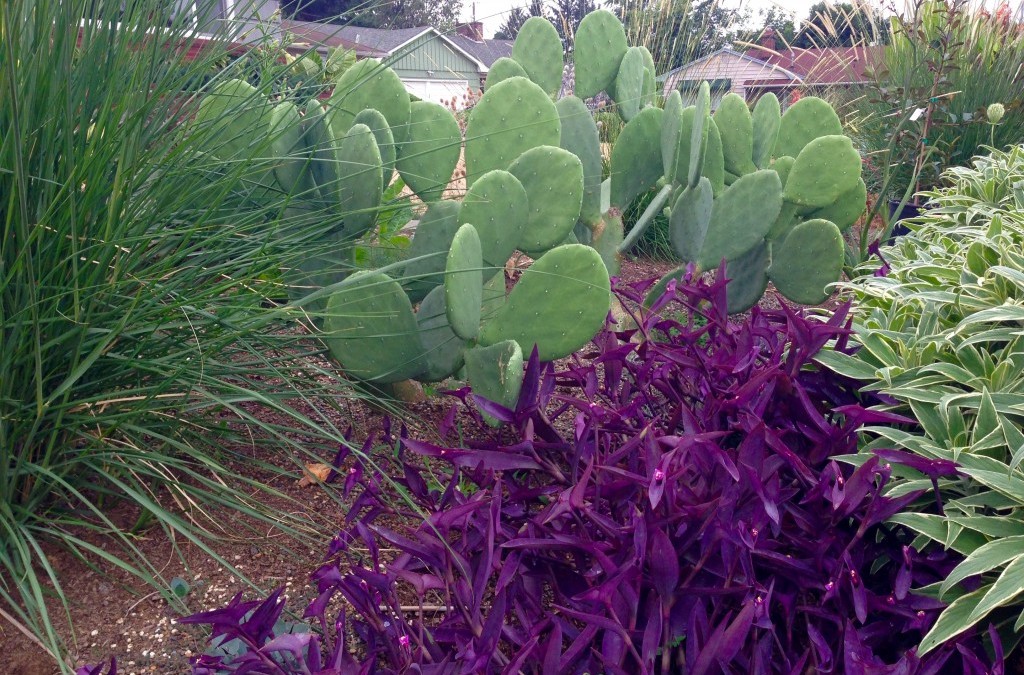 I can’t tell you how many times people have gone gaga over the lowest priced plant in the garden. Isn’t it funny, how you can moon over some rare and expensive plant. And then you finally add it–just to have peeps push past to rave about some inexpensive annual floozie.

I’m not seriously complaining, because I love when people get interested. Maybe they’ll take up gardening. And before you know it, the whole world will be a better place. It could happen.

This Datura wrightii garnered no end of oohs and aahs. I bought it for $3.99 at Garden Fever in NE PDX at least three seasons ago. I expected it to peter out on our previous hellstrip, but it kept coming back. And then I thought I’d abandoned it when we moved. But a little piece hitched a ride. And now it’s back flaunting its bold and beautiful ways here at Flamingo Park.

It opens in one day to this.

And sometimes two for one. Of course people ask about it. It’s splashy fantastic.

I’m going to take license and include gift plants in the biggest bang for your buck category, because those are the best bargains of all. How I love my generous gardening friends. You may think you’ve seen this photo before, over at danger garden. But it’s a new batch from the same source. (Yes, we keep our cars forever–though in one case, a Volkswagon Vanagon was stolen from our driveway in the fancy neighborhood. It was the worst car in the area. The police said some hippies must have taken it! And wouldn’t you know, it turned up in Eugene OR six months later.)

How crazy is this. You stick Opuntia paddles in the ground, and they grow. These even had flowers this year. No, I did not take a picture–because that would be advanced planning. But it’s true, I swear.

And then the Opuntia took hold, as also shown in the banner photo up top. (I bought the poor Canna at Means Nursery. It was root bound, and has never been happy in this spot. It’s moving as soon as the weather cooperates.)

And then magic. I know I planted this, but geeze Louise, it still surprises heck out of me how things up and grow. The Castor Bean, African Feather Grass, and Opuntias Noid–all free! Look at all that gratis impact. Thanks Loree, Scott, and Spencer.

Many plants in Sedum Corner came from Little Prince of Oregon. It was a fine day out with fellow bloggers. And quite a few from Xera Nursery too.

The Echium candicans were $7.99 at Garden Fever. Pretty decent punch for the buck. Then I couldn’t resist next time I went back and bought a second plant. Dang it though, I should have spaced them farther apart.

See at how healthy it looked. I had  to buy another one. Then they both got pouty for a week or so, and I thought I’d made a mistake.

I can’t remember if I bought this again and planted here at Flamingo Park, or if came of it’s own accord. My initial Verbascum ‘Arctic Summer’ became a behemoth of great beauty. It was $3 or maybe $4. And I was pretty happy with it when it was just a big velvety rosette. It looks great alongside spiky plants, like Agaves and Eryngiums.

I almost thought I’d like it better without the blooms, but the Dr. Suessian brilliant yellow candelabra is fantastic. And just today, I saw a Downy Woodpecker feeding on the spent flower shaft. Alas, he wouldn’t hold still for a photo.

And then there’s Eucomis pole evansii, a gift from Burl of Rare Plant Research. It starts life as a knobby ugly duckling bulb.

I was so surprised when this flowery fountain showed up from that bulb. I’d almost forgotten about it–in its underground knobby state.

It just keeps getting better. From that funky looking bulb no less.

Who doesn’t love Poppy? (One of my dad’s nicknames, so that make me happy too. He was the sweetest man in the whole world. I should probably include a favorite picture of him so you can see for yourself. This was at Yellowstone in 1982.)

These Glaucium were around $5. The foliage was such a good surprise, all textural and exuberant. Then came the almost florescent yellow flowers. Money well spent.

And don’t pass up those end of season sales. Garden Fever, like many nurseries, had lots of good plants at 40% off last year. Yes, please.

The Farfugium japonica ‘Cristata’ and F. japonicum “Aureomaculatum’   turned out even better than I expected. And I expected them to be pretty good.