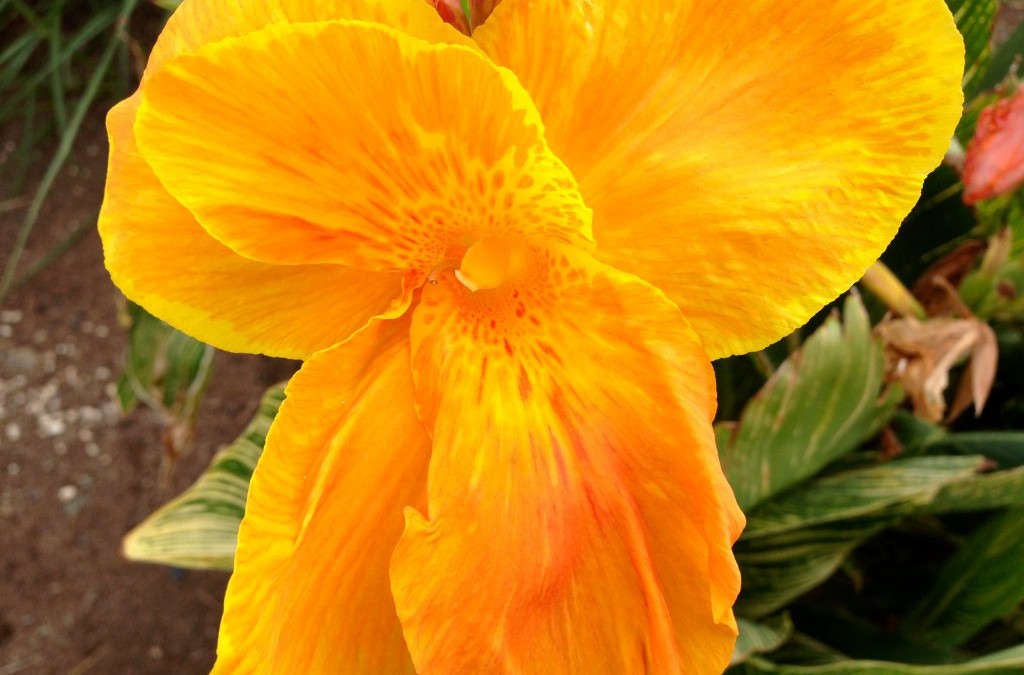 I’m on a color toot. After patrolling the garden to check, “dear-dog, do-I-have-to-water-again-today?”, it occurred to me that my inside color inclinations are mimicking what’s going on in the yard. Even though there’s still plenty of hot headed our way, a couple of mornings I’ve felt that subtle hint of fall air. I guess it doesn’t mean anything–other than the weather gods must be crazy and are having a good time messing with us. But it got me thinking about fall and winter, albeit in the unconscious way initially. (Now that I recognize the connection, I admit it: I love heading into fall and winter. Heck, I even have a bright new pair of blue boots I haven’t worn yet.)

So apparently the color thing began earlier than I realized. I practically swooned when I saw those blue boots at Nordstrom Rack for 75% off. The trade off was that I wouldn’t be able to wear them for months–if ever, the way things are going.

Thusly, I’ve been painting. Test painting. I’m the queen of color samples. The nice folks at Miller Paint probably think I’m starting my own store. But I’m seriously testing these colors, and by testing, I mean painting entire walls, if not the entire room–because I can’t tell otherwise.

Odd pictures placement, but here’s the hallway before. Same color as the living room, but with no natural light. Very sad and muddy looking.

I sat with the orangy/yellow hallway for at least a week before deciding to go all orange. The wall on the backside wasn’t safe either. In the family room, Cool Aqua, is pretty bright. I wanted to do the entire wall to see if I could live with this much color. Of course, as it sits, it’s not really a true test, because it’s only one coat of test paint. So I bought a second quart to try and get a better read. I haven’t done that yet. (Miller sells test quarts for $5, a super bargain and good way to try out colors.)

So the family room paint is still auditioning, and I’ve got to get another coat up to know. And I also painted another wall this bright orangy-yellow. I like the color, but not sure I can live with an accent wall. I don’t generally like them, but maybe…

I like how the “Hot Lips” pink draws the eye to the hallway, but a little too much circus. In theory, the color combo is good.

Tee hee, wonder where I got that color ideas?

And this Crape Myrtle is dynamite too.

And so, I’m testing a darker fuchsia in the living room. Mister Kitty has been quick to help. My plan was to test a patch behind the painting, but I’m not fooling anyone. That whole wall will need color, and several coats from the look of things.

The paint patch will be hidden by the painting, until I can’t stand it, and have to paint the whole wall. Meanwhile, Mister is getting awfully friendly with my son-in-laws painting while it’s off the wall. 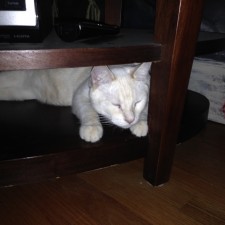 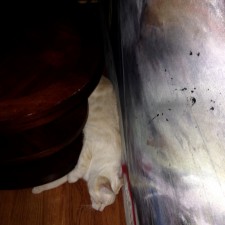 Bet this canvas works as camouflage. 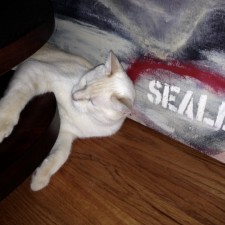 What does Sealboy mean, anyway?

Upshot, I know the color is behind there, and I’m dying to paint more. Of course, now I know, I can’t take the painting off the wall without getting Mister’s help. Oh, and also I’m not supposed to spend that much time on a ladder because of my pesky concussion which thwarts good balance.

And then I live with it for a few days, or weeks, as I contemplate whether I’ve worked the color puzzle to my satisfaction. It’s an arduous process in this busy brain, but also fascinating–how the light changes everything. How painting a super bright color on a long windowless hallway is magic–painted on one side. But if you paint that color on both sides, you’ll feel a little like you’re in a tunnel. I know. I tried it.

And though I’ve always like color, I’ve never gone as bold as I’m going now in our mid-century ranch. The house lends itself to brighter colors, methinks. But it could also be some part of the when-I’m-an-old-woman-I’m-going-to-be-hell-on-wheels direction of life. How did it all happen so fast? And mind you, I’m not complaining about age. It beats out of the alternatives by a long shot.

So once again, I’m off on a tangent, but here’s what I was thinking. Maybe learning to appreciate what you have, all the wondrous bounty, is the project of your entire life.

It’s the attitude I’ve settled on for the garden. I’m not looking for anything approaching done or perfection. I’m happy enough to moon over a single bloom or blade, even as the rest is tangled chaos. I love tweaking and changing, lugging rocks that are too heavy to move, adding odd metal pieces of art and seating. I’m gardening along, wondering what would be better where, and, of course, what great new plants I can add along the way. Or how many seasons I can get away with a particular heartthrob before it doesn’t work in the space anymore–though I don’t overly concern myself.

So often when I’m prowling nursery aisle ways, I hear people ask, “But will it get too big over time?”

And I always tell them, “Only if you’re lucky.”