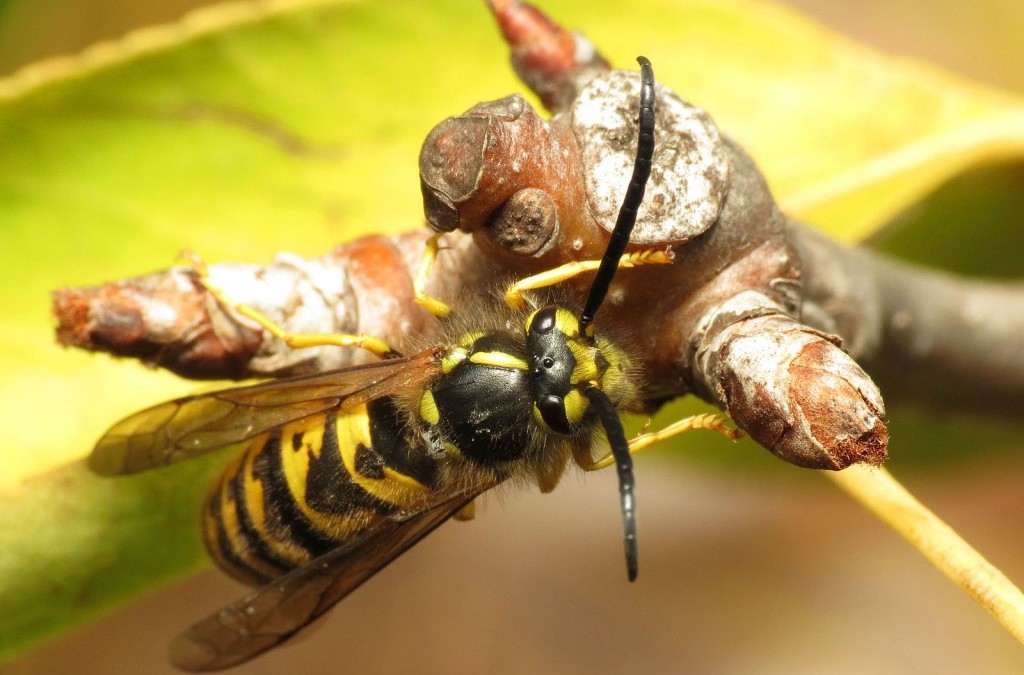 The best laid plans. After too many months of my rain dances going ignored by the weather gods, the time had come to give my trees a long overdue hose soak before things got too crispy. Which meant creeping through paths I haven’t been down for a while. Which is how I discovered a huge nest of angry yellow jackets. And by discovered, I mean, getting stung on the bum. And then a few more stings on my leg and back for good measure. Jerks.

I dropped the hose on the spot, and scooted right out of there. Thankfully, they didn’t get Pokey Doggie, who thought we were doing a fun new dance, and chased me back inside.

I really hate what I did next.

Last year, we had a wasp nest right over the back door. I did some research and found they were paper wasps, which will sting if you bother them, but they’re not usually aggressive. One would find its way into the kitchen every couple days, but we were able to do the old catch & release routine with a glass and a piece of junk mail. Nobody got hurt, and then fall came along and they were gone.

I was hoping for the same deal with the yellow jackets. I had dropped the hose by the nest, and I needed to get it back before this week’s forecast heat descended upon us. So I watched the nest settle down for a few hours, then snuck out, and from a safe distance, tried to slide the hose out. Which would stir up an angry swarm, I’d run in the house, and wait to repeat the process.

I let the dogs out once more and Pokey went bounding right past the nest on his way to see if there were any neighbor cats to bother, as is his habit. Somehow he never got stung, but seeing how easily the yellow jackets were roused, I couldn’t shake visions of those dogs who eat bees and their snouts puff up like they’ve stuffed baseballs in their cheeks.

I’m so not a fan of killing bugs. I’m pretty dedicated to hippie natural controls. During ant season, the house looks ridiculous what with all the cinnamon sprinkled on all possible entry points, but I’ve never been able to stomach the idea of poison. Last year I bought a few wasp traps to deal with the nest by the door, but felt too bad about the idea to actually use them.

But dammit. Those yellow jacket stings are nasty and so enthusiastically and plentifully delivered. I was trying to imagine how I would rescue a dog under attack, and couldn’t see it ending well for any of us. So I did something I never wanted to do, and called in a professional to get rid or them.

The guy I called has specialized in bees and wasps for as long as I’ve been alive, and was a wealth of knowledge. I liked that he considered education a part of the job, so hopefully I can avoid ever doing this again. I hope this info also helps you guys avoid unpleasant run ins of your own.

Yellow jacket nests die out during our cold winters, while the queens overwinter and start looking for a suitable place to build a nest in the spring, The queens are opportunistic, looking for a hospitable hole in a rock wall, a piece of wood, cracks in the side of a house, animal holes in the ground, or even a pile of unrated leaves in the garden.

The queen starts out with a golf ball sized nest, and as she starts laying eggs, and workers hatch, the nest grows throughout the season. Some get to be 5 feet across. Later in the season, they become more aggressive. The guy said our nest was probably hatching 50 wasps daily, and in another six weeks at it’s peak, it’d be more like 200 a day. It was going to get worse before it got better.

Yellow jackets forage within a quarter mile of their nest, and return frequently, so treatment involved coating the nest with something I probably should know more about. The guy said it’s a mix safe for use in hospital rooms and around kids and pets. The guy said dogs wouldn’t eat it because it’d be like eating sheetrock dust. But I know a few dogs who eat sheetrock, so I wouldn’t test that theory by letting the dogs come in contact with it. I’m glad it was locally applied, and the bees, butterflies and birds in the yard weren’t hurt in the process.

The wasps that were home at the time, um, went to bug heaven quite quickly. The others would join them when they returned to the nest and came in contact with the powdery substance. In a matter of 2 hours, they were no longer there.

Because of our mild winter, the bugs they feed on are plentiful, so yellow jackets are tolerating other nests close by. He said if we had one nest in the yard, there’s a 20% chance there’s another one out there. He told us to scan the yard for other yellow jackets, and watch where they go. If you see one drop down toward a possible nest, hang out for a minute and see if another follows the same flight pattern. If it does, there’s likely a nest there, so you can avoid the area, or take care of it other ways, if you must. Good to know.

Ok, so. That is unpleasant business, and I’m disappointed I had to go there. But what made me happy is the prevention plan for next year. Because the queen picks the nest in spring, you need to get out ahead of her, and put out a no vacancy sign by caulking holes and cracks in the house.

But how about those spots in the yard that they like? The rock walls or wood that looks like a nice home? His recommendation is soaking cotton balls in Avon Skin So Soft bath oil, and sticking them places yellow jackets might want to call home. Once a nest is established, the oil won’t chase them away, but while they’re checking out new digs, they won’t move in with the stuff.

Here’s hoping next year we can keep the peace without resorting to drastic measures. Be careful out there. Keep an eye out for marauding wasps.

Thanks to Katja Schulz for being much braver than me, and getting a good close up image.