Knowing your site, and making the most of it… 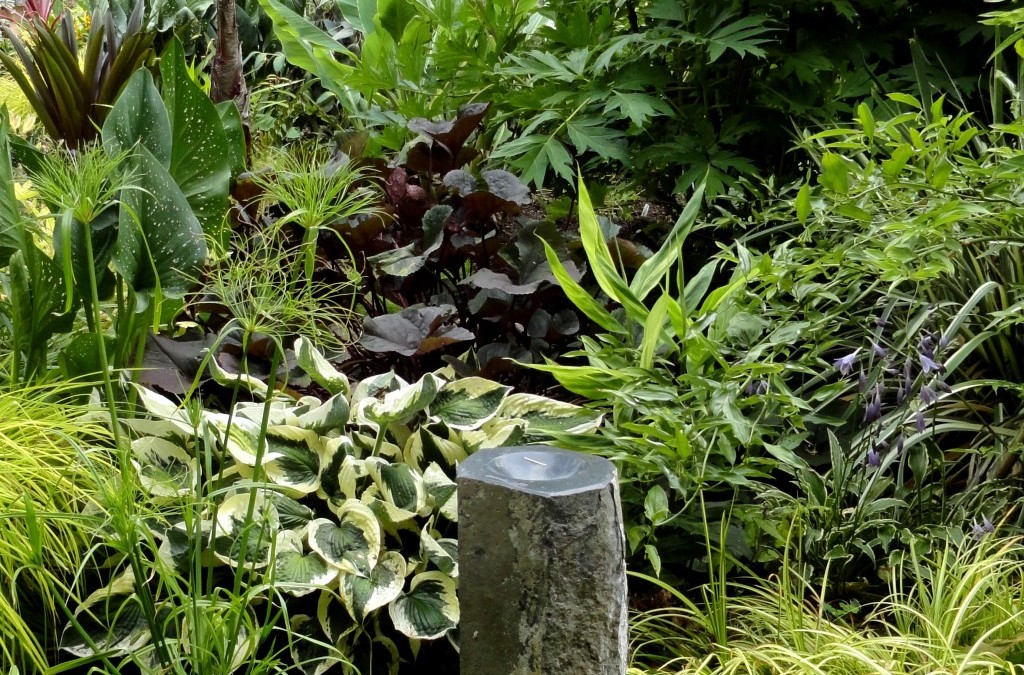 I am blessed to live in an area with great nurseries and great gardeners. That point was driven home again last weekend when I crashed a friend’s open garden. Our local Hardy Plant Society was playing host to gardeners from all over the Pacific Northwest (and beyond) for the annual Study Weekend. The event alternates between Portland, Salem/Eugene, Seattle and Vancouver/Victoria BC (all great gardening cities). 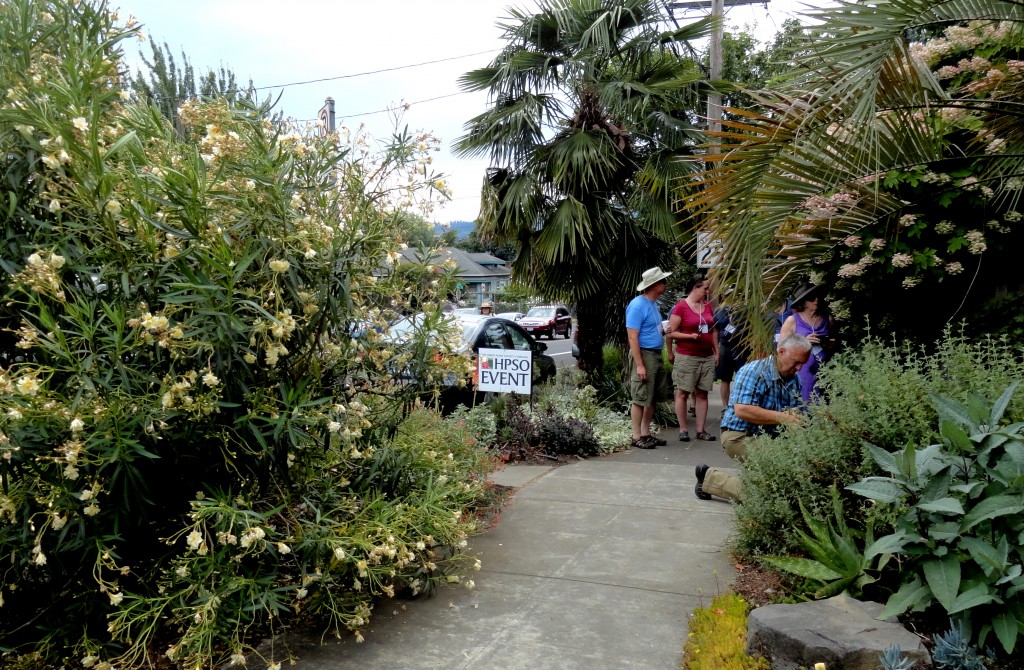 Lance, the owner of this garden, who blogs at Garden Riots, has been gardening on this bit of land for 25 years. He knows his site well, taking advantage of it’s benefits (chief among them a warm microclimate) and working with it’s challenges. 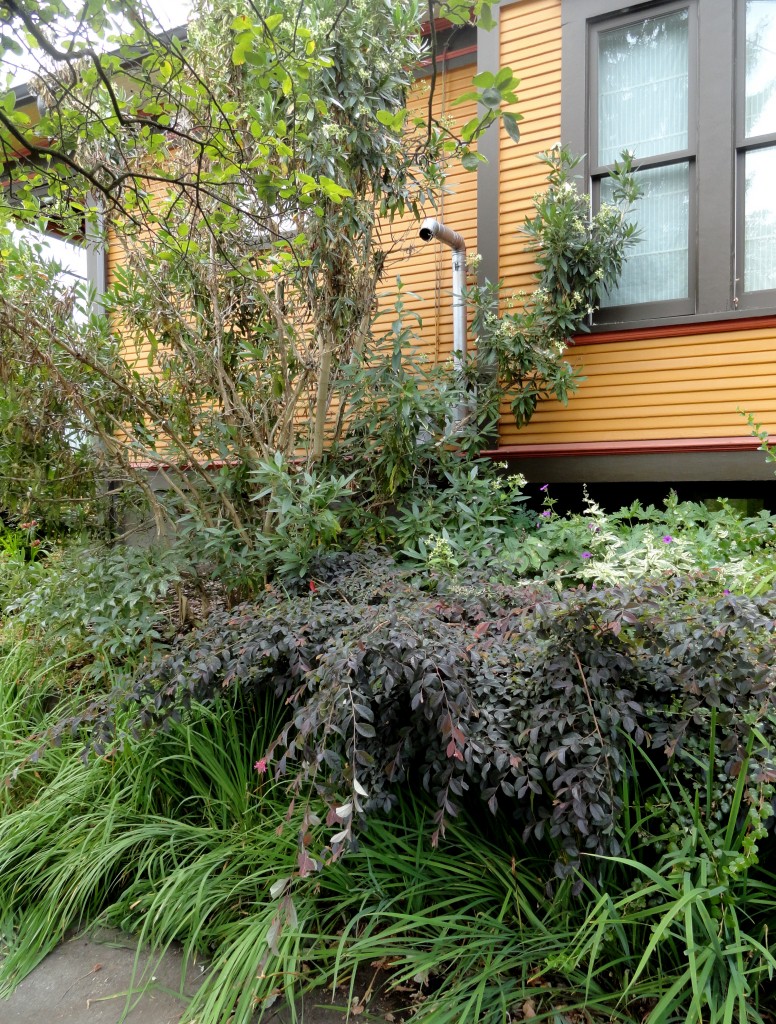 That warm microclimate comes from the overall location in the city, as well as living on the corner of a man-made heat island (also known as an intersection). 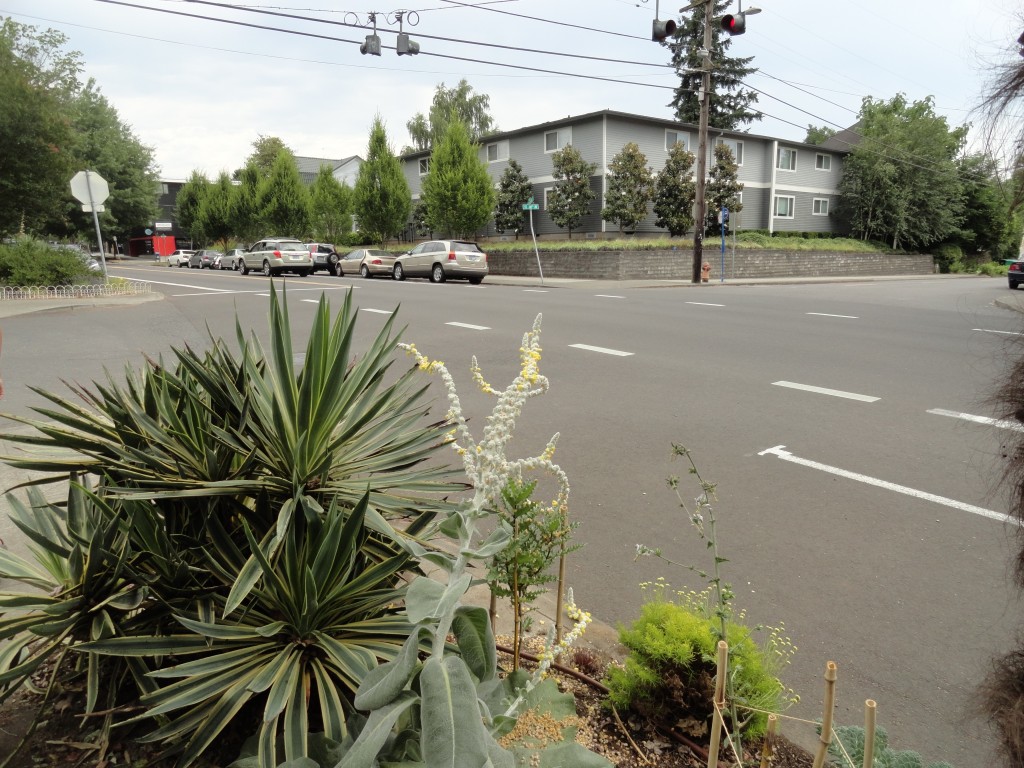 His blog posts are not a “quick read,” but rather dense with information on subjects such as planting in drought conditions (here), or an overview of his garden and site (here). This one is a wrap-up on opening the garden, with several photos of things I wasn’t able to capture due to the number of visitors enjoying the garden… 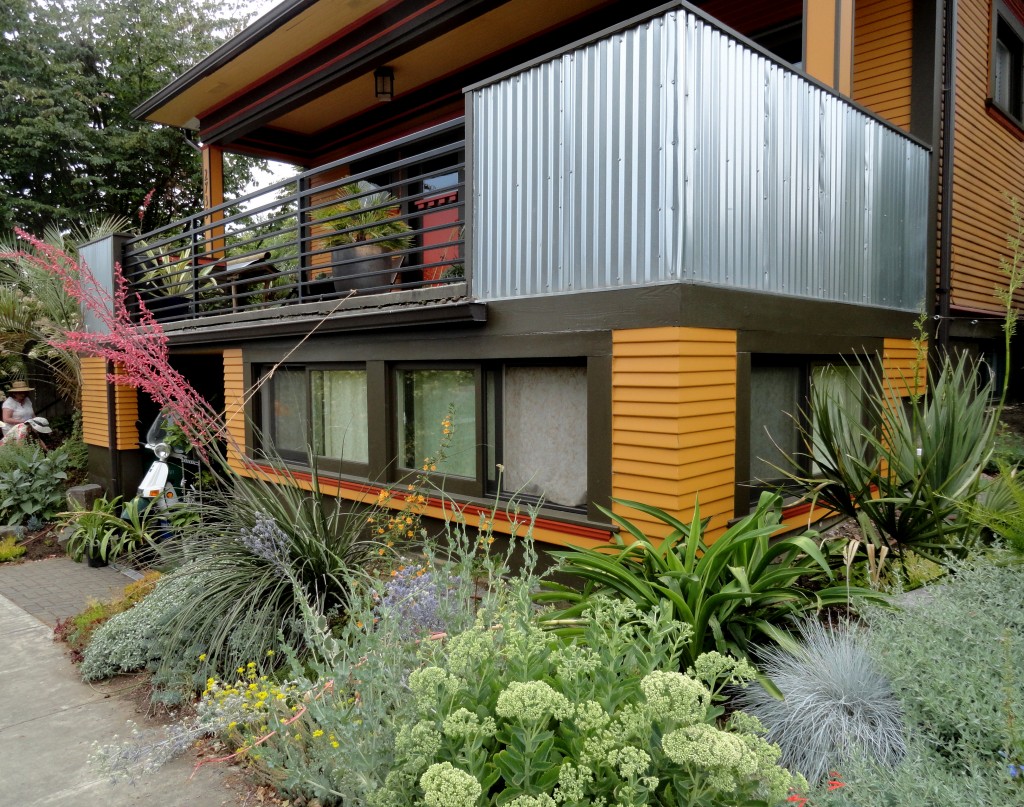 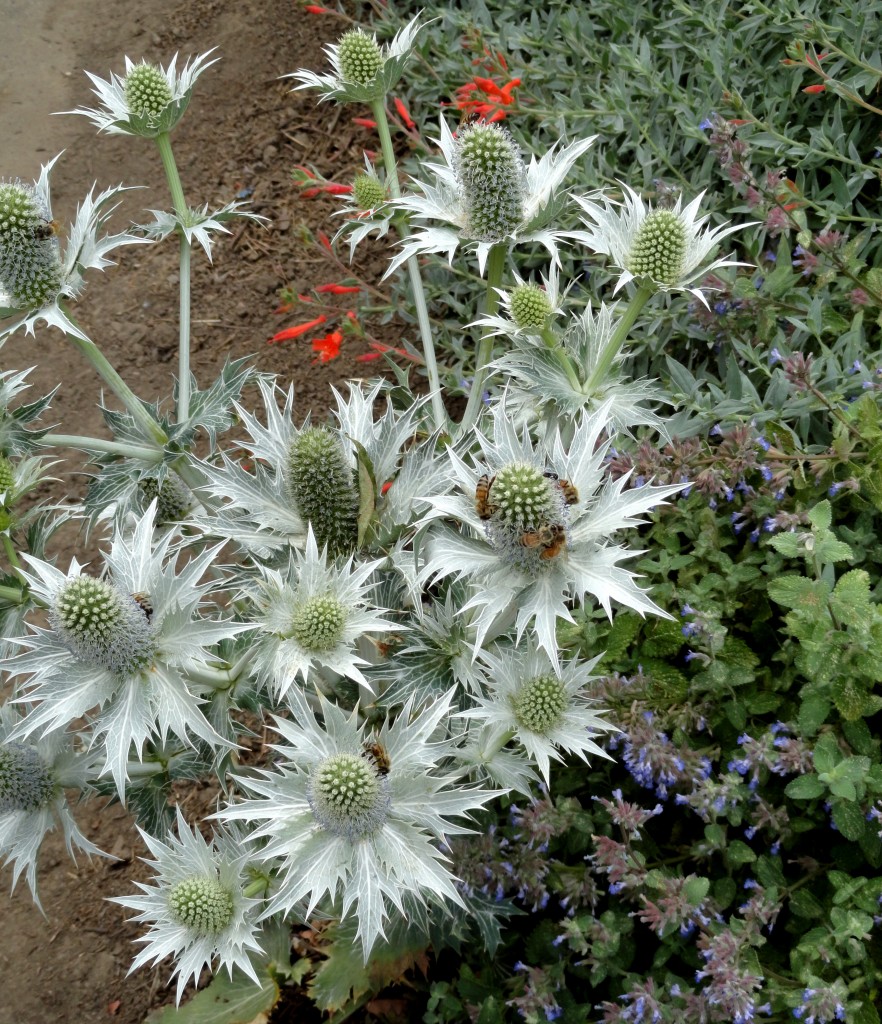 I first discovered this garden as a drive-by in September of 2011, I remember how thrilled I was to see this monster Callistemon (below, only the bottom 1/3 is visible in the photo). You just don’t see many of them around Portland, especially this size. The Agaves were all there then too. I vowed to stalk the garden. 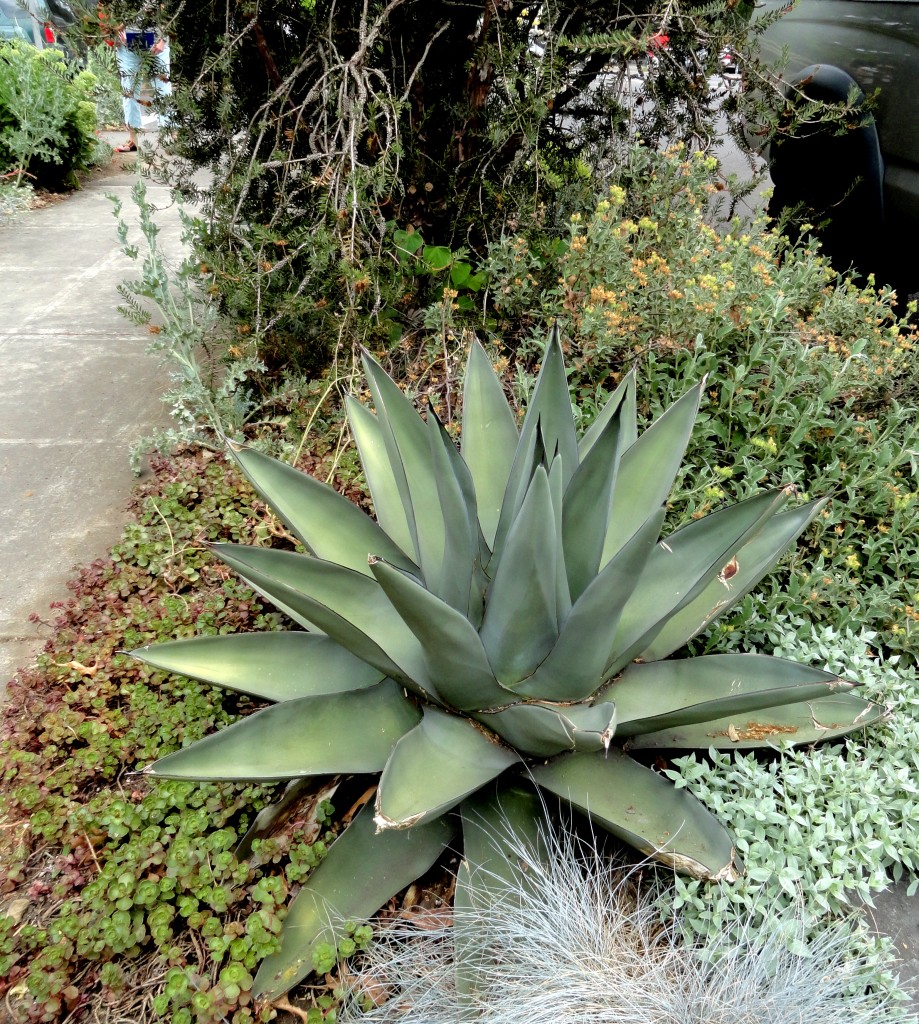 Of course this being Portland it didn’t take me long to get a name, and meet the owner. Lance invited me over for a private tour just a few weeks later, photos here. Aren’t gardeners the best? 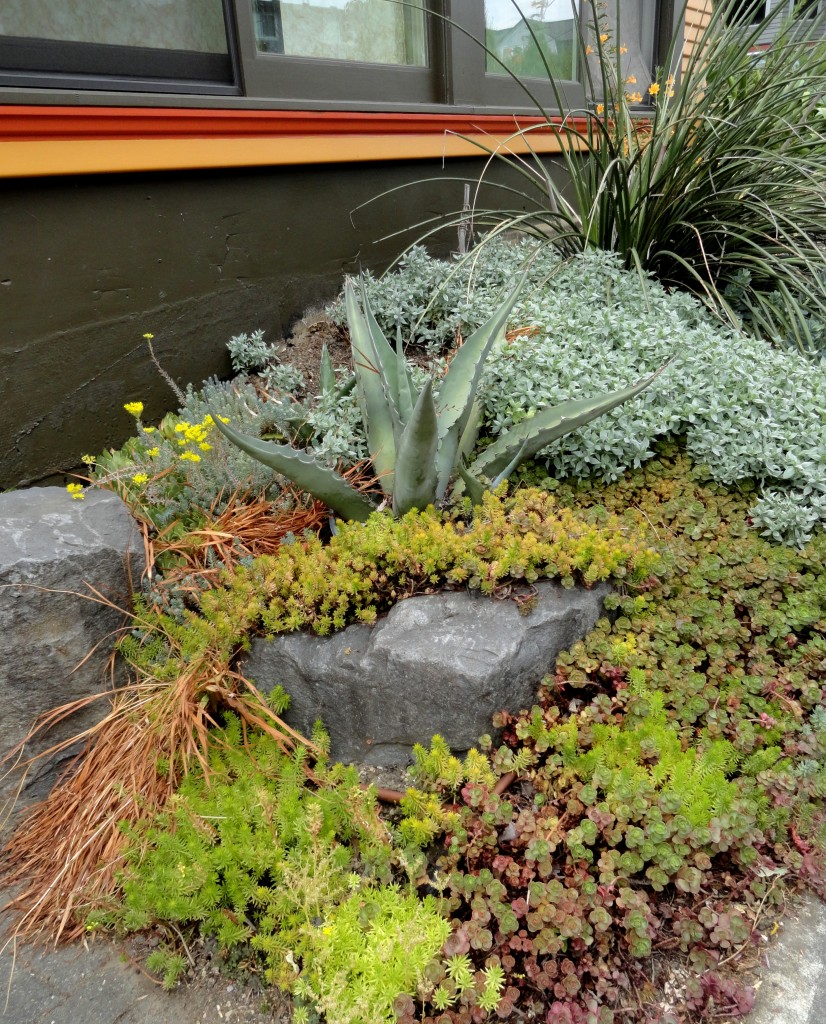 During this weekend’s visit I heard many people exclaim “they can grow Oleander in Portland!?”…well, some people can (remember that warm microclimate I mentioned?). 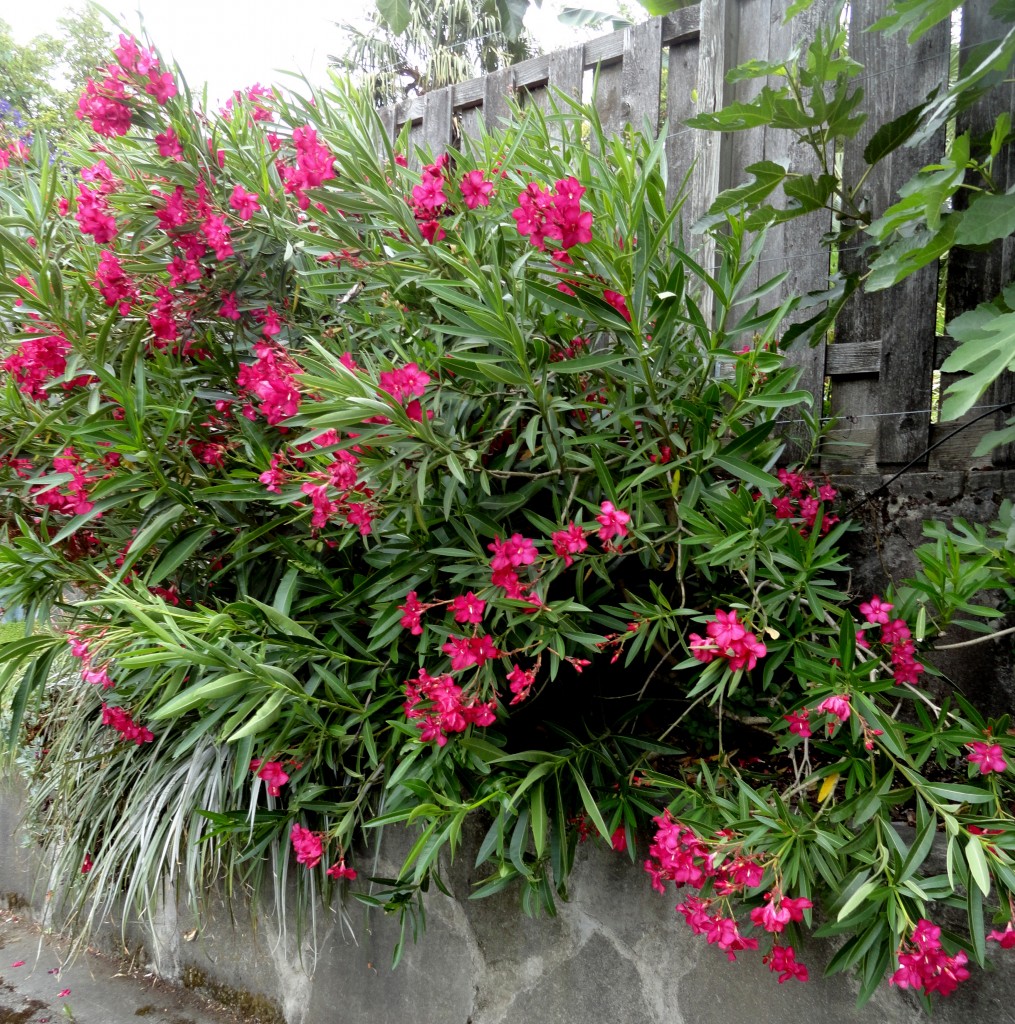 Agave montana, in the ground for  15 years – and yes all the plants thus far are in the hell-strip or along the public sidewalk. Gardening in the public eye at it’s best! 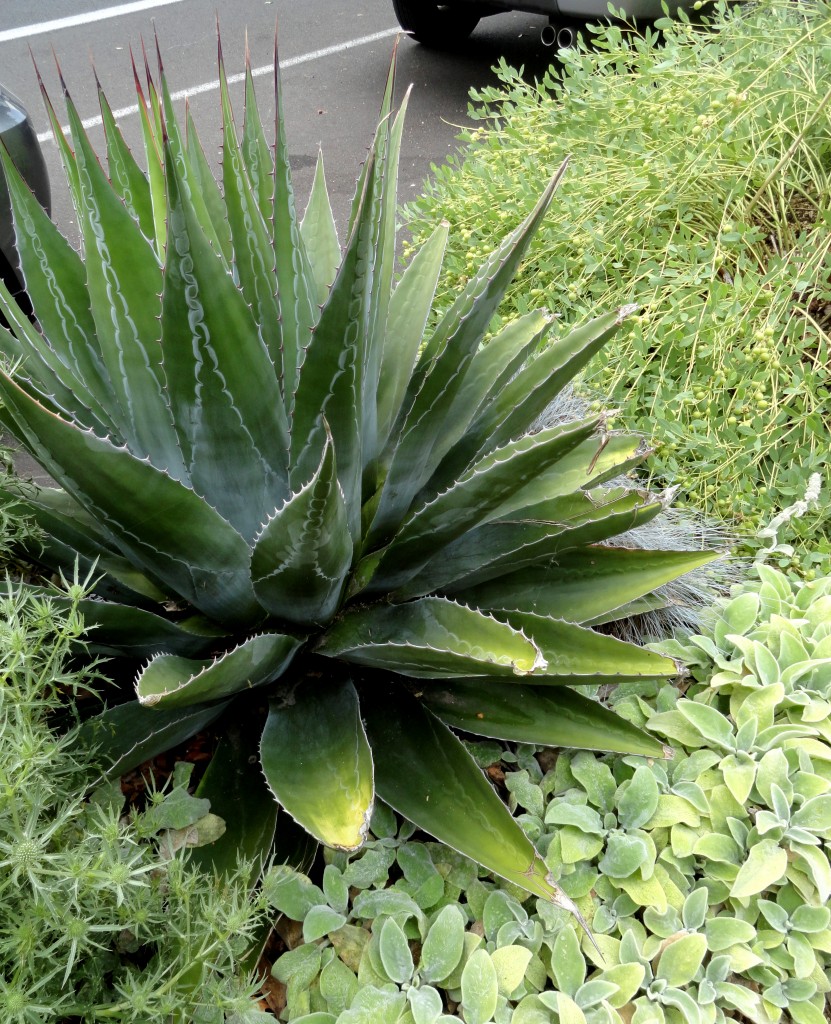 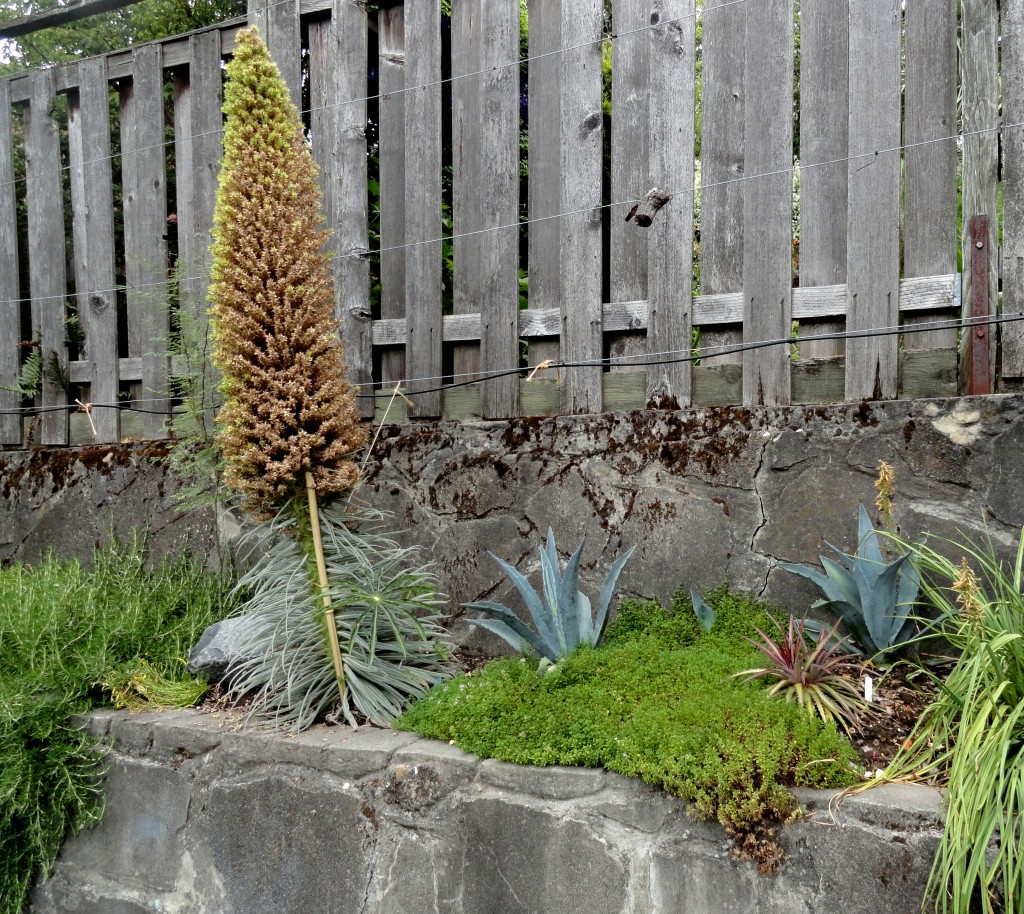 A bright Dyckia, the planting of which was inspired by… 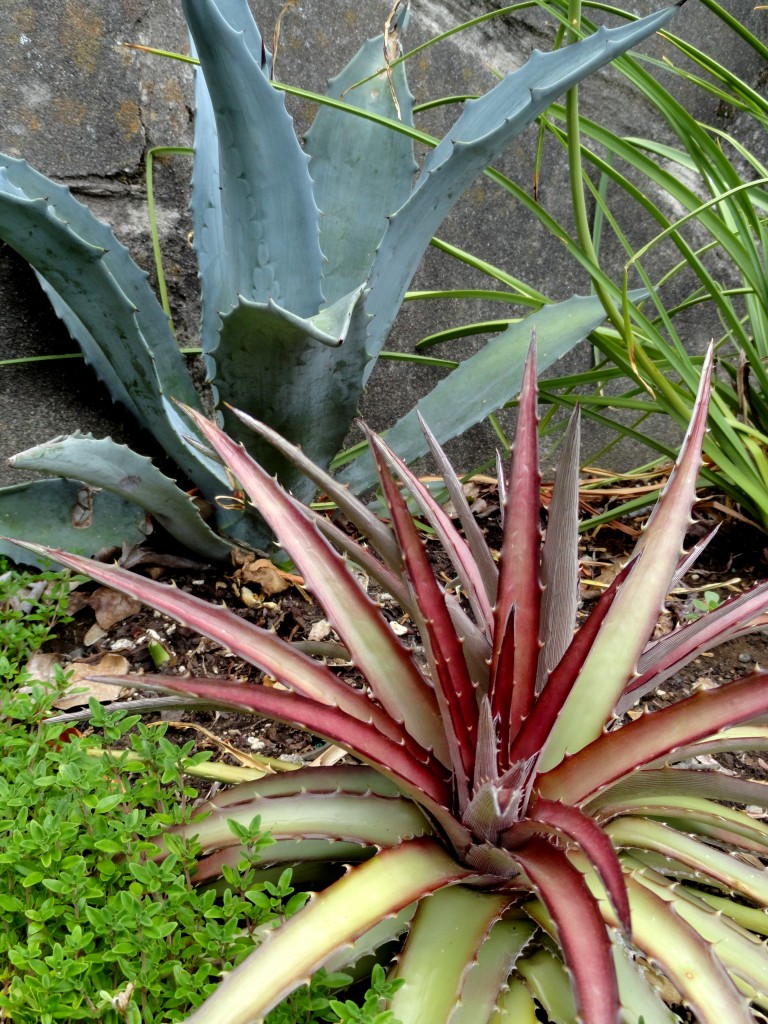 …the blooming Puya dyckioides just behind it (partially overtaken by the Oleander). 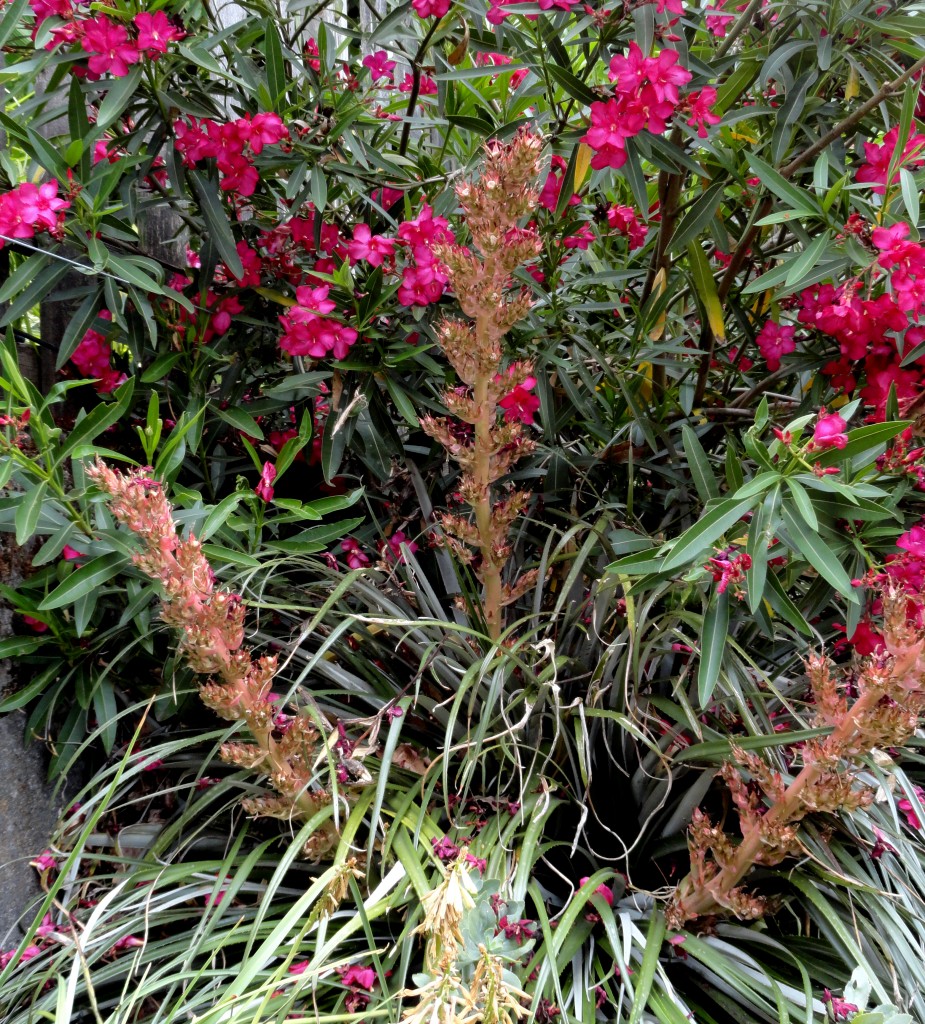 There’s the gardener himself… 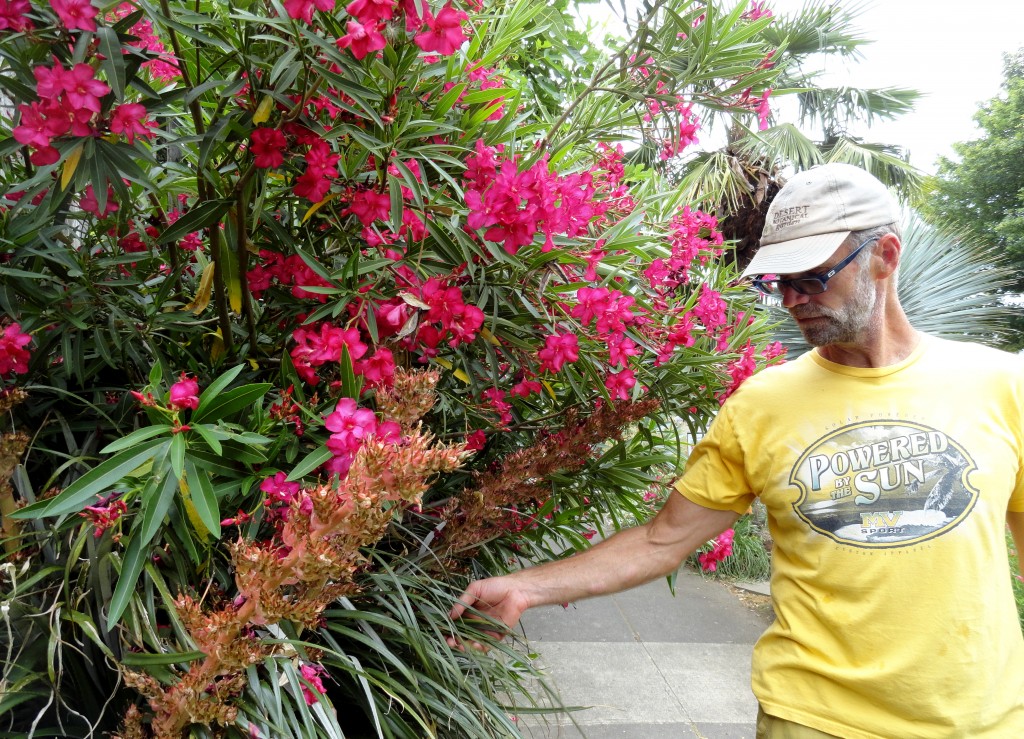 Now it’s time to climb a couple of stairs and visit the private garden beside the house. First (of course) we have to stop to appreciate the Agave parryii ‘Hauchuca Blue’ (in the ground, unprotected, for 6 years) and the Butia capitata, which has also survived a few cold winters. 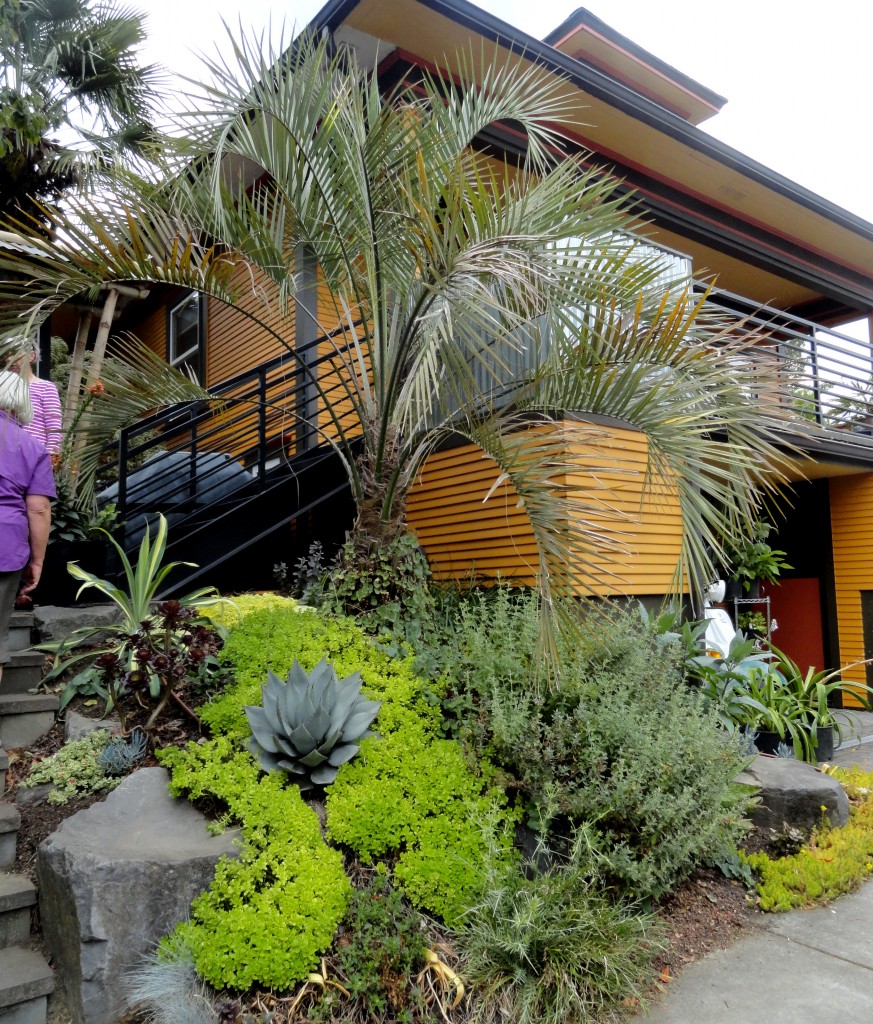 If I remember right the Beschorneria spent last winter in the ground, the Aeonium however did not. 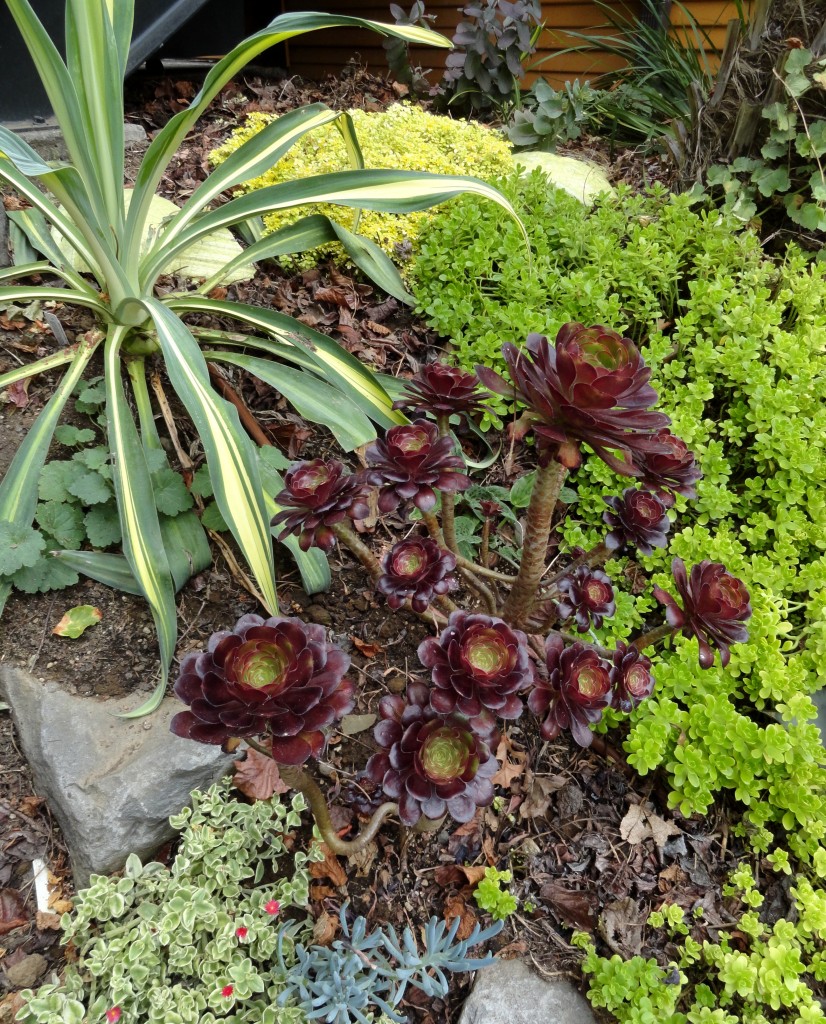 See that Ensete ventricosum ‘Maurelii’ on the right? It’s probably the oldest Ensete in Portland. The story of it’s winter storage is detailed here. 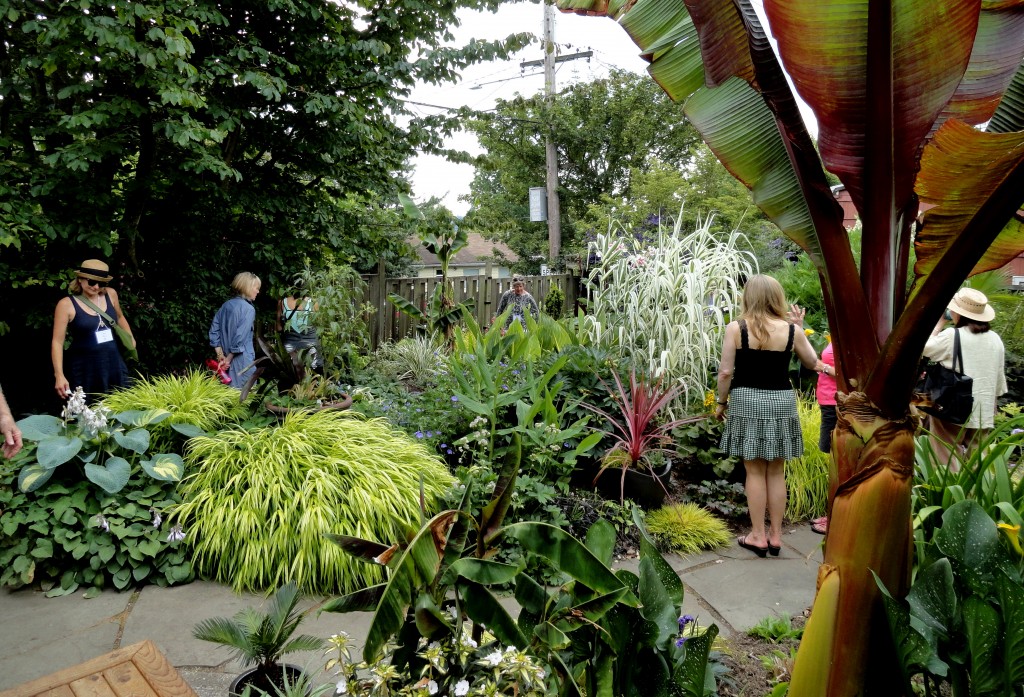 Okay, time for me to be quiet and just let you soak up the beauty… 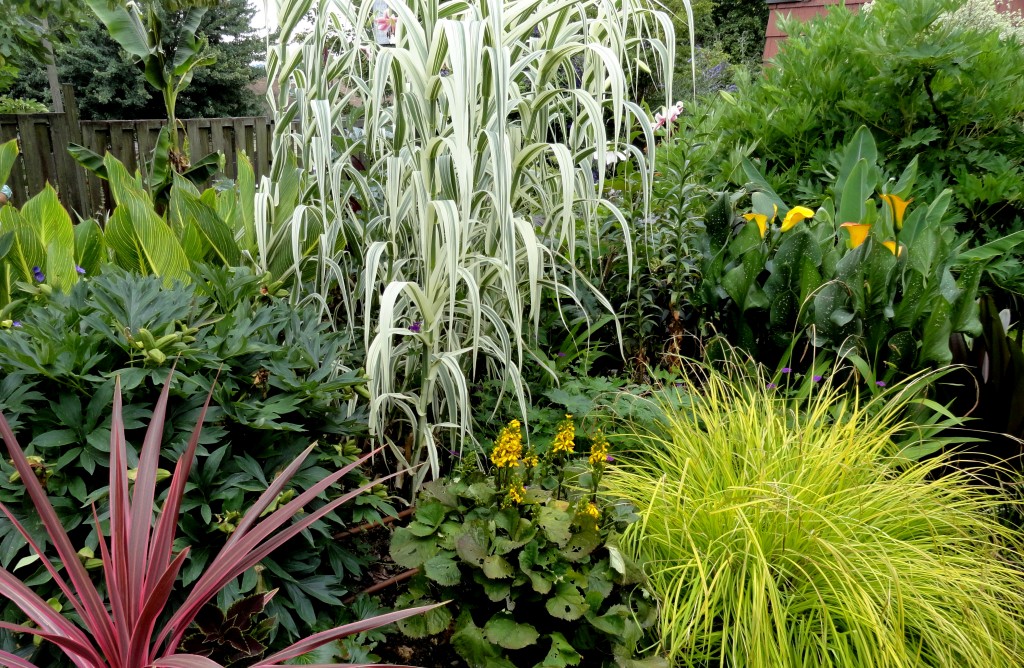 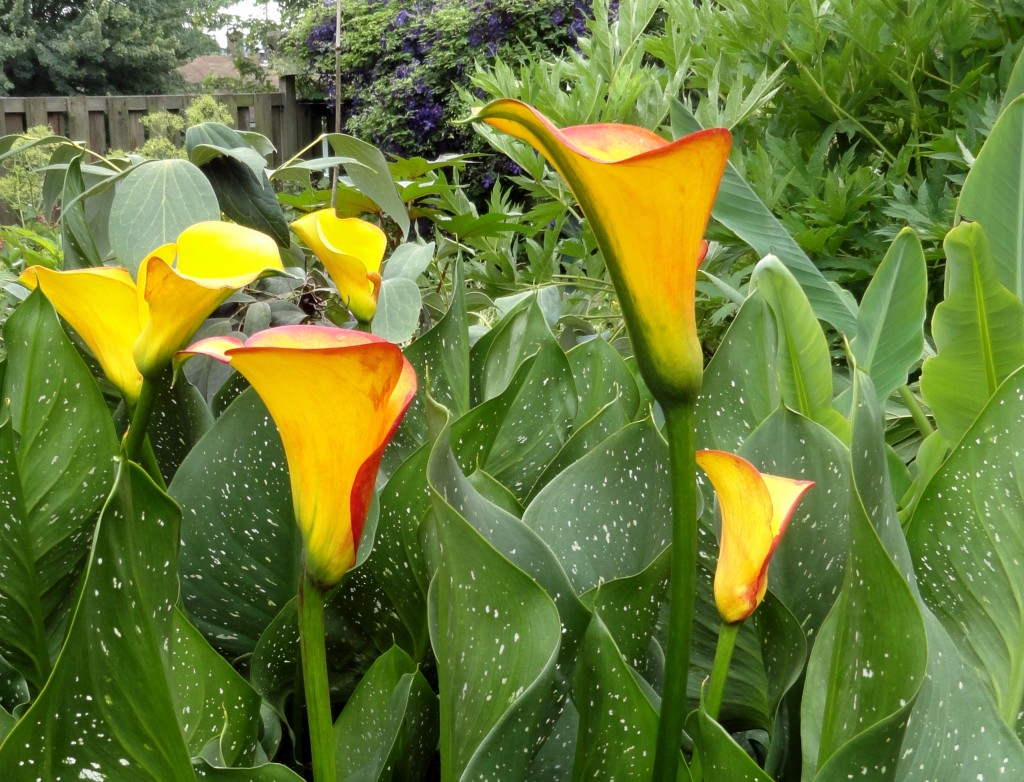 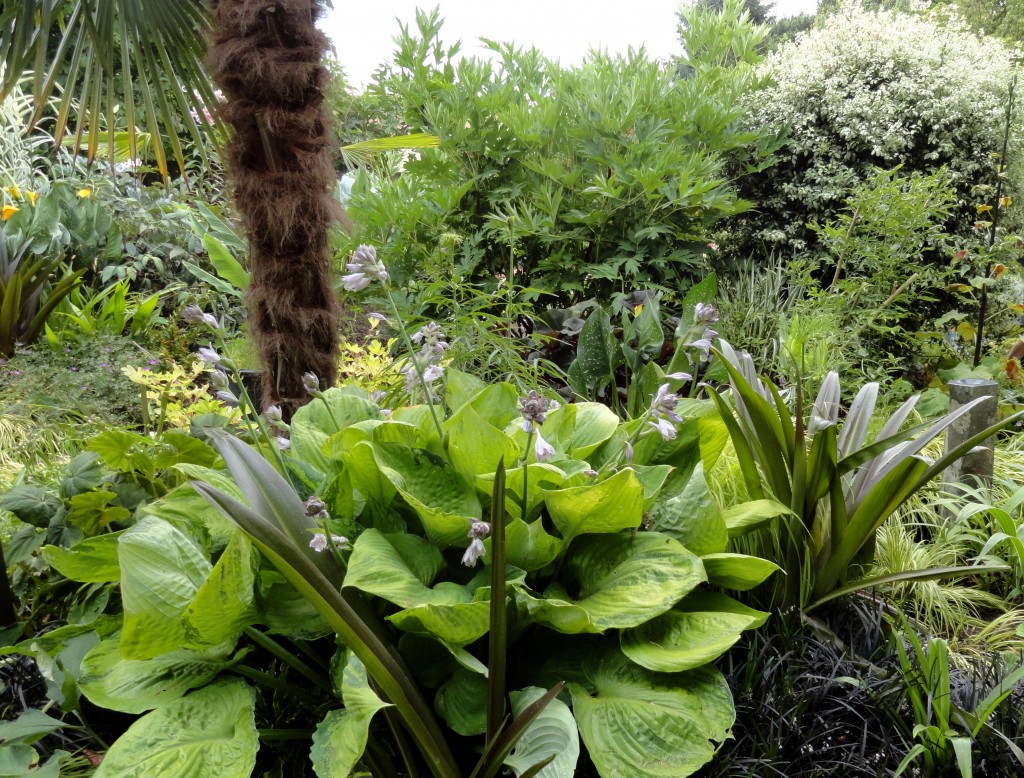 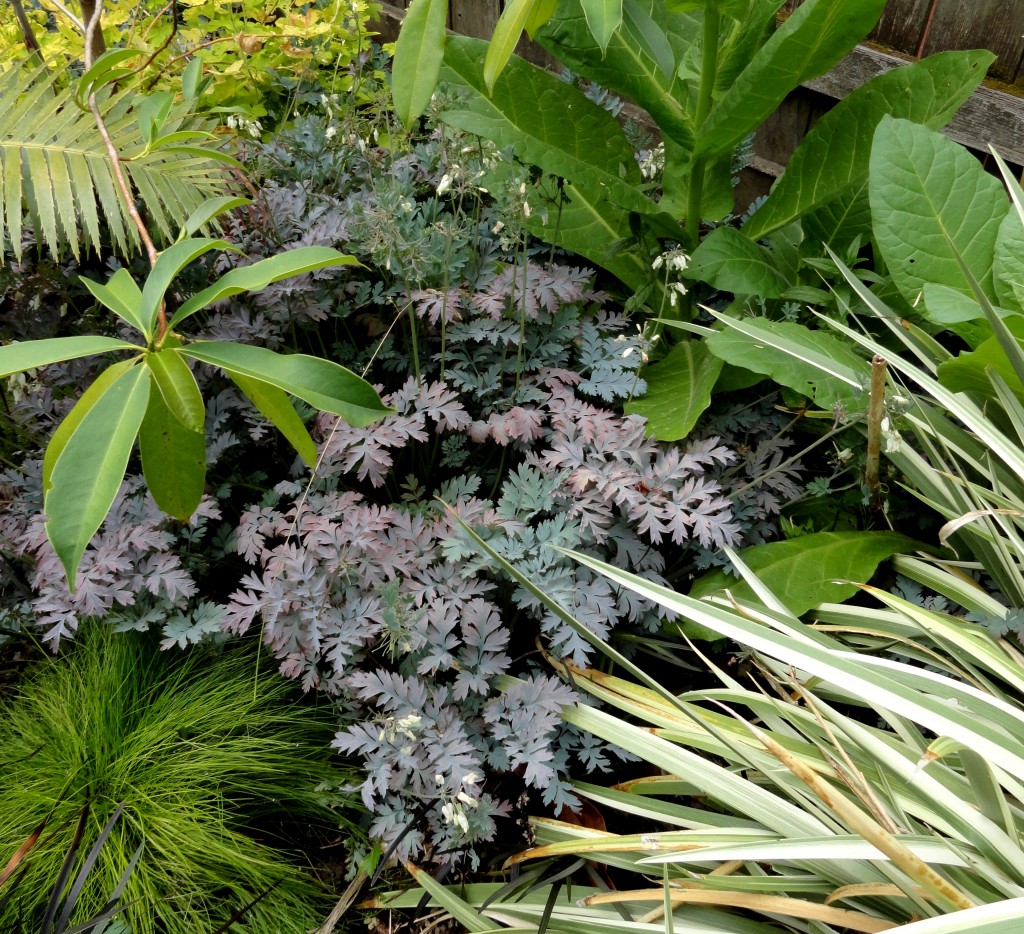 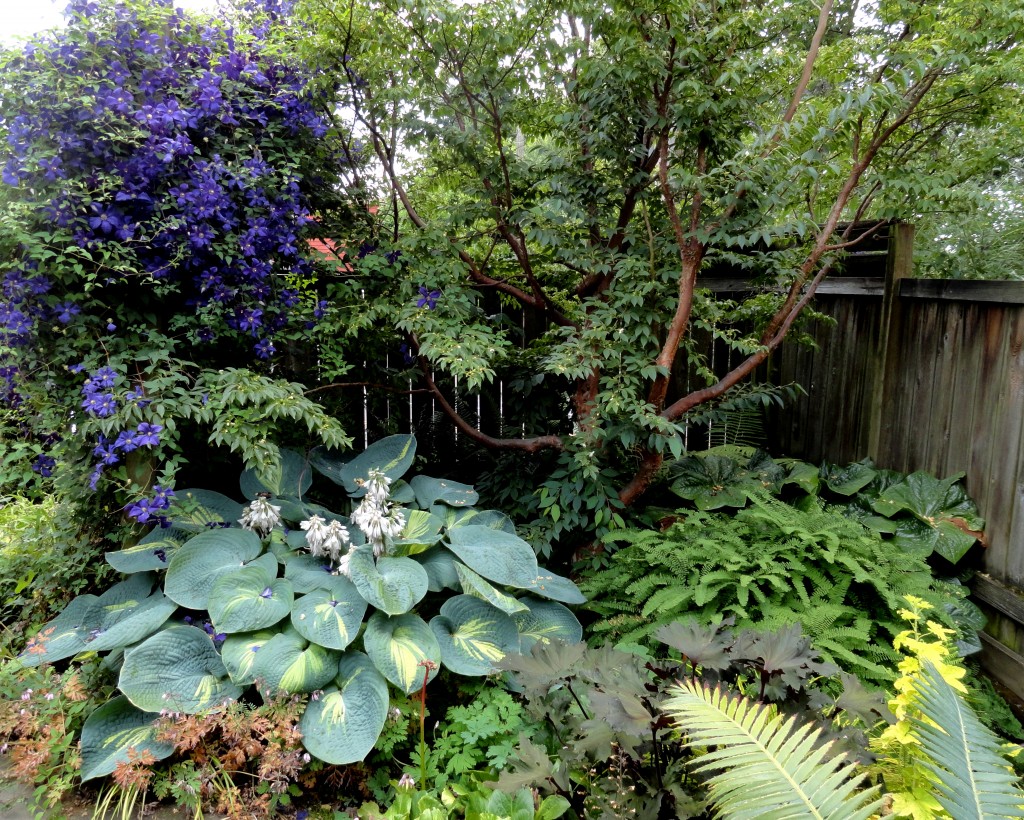 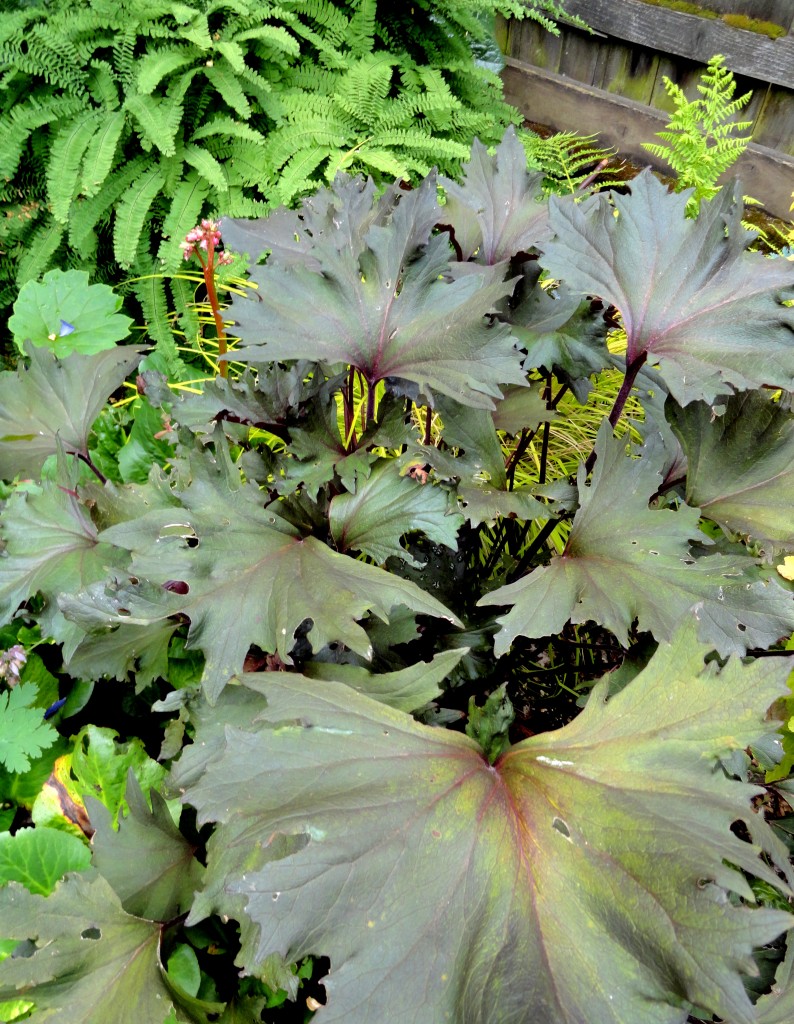 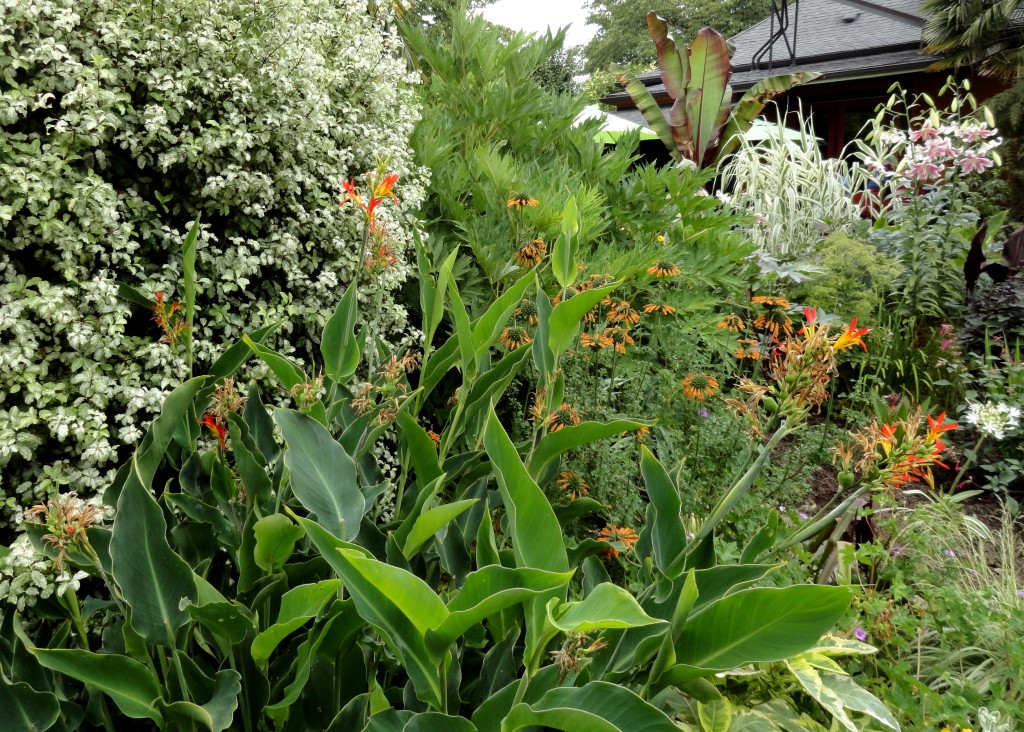 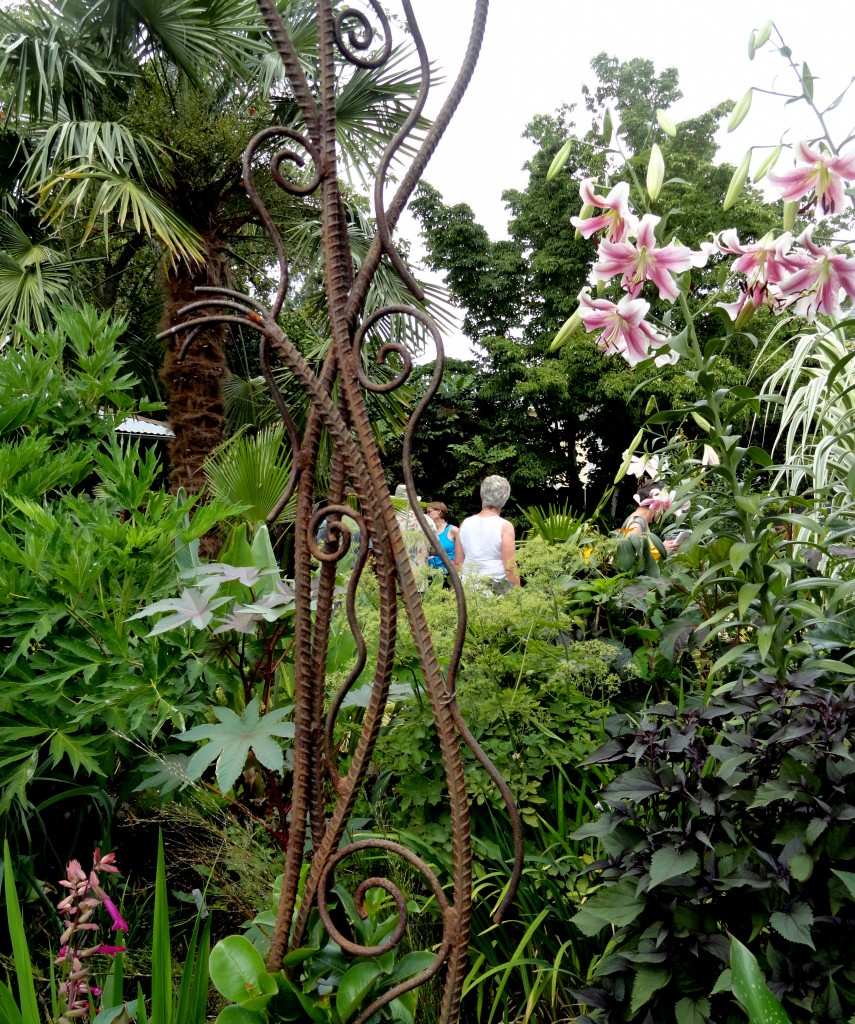 Must remember to ask where I can find one of my own. Lance? 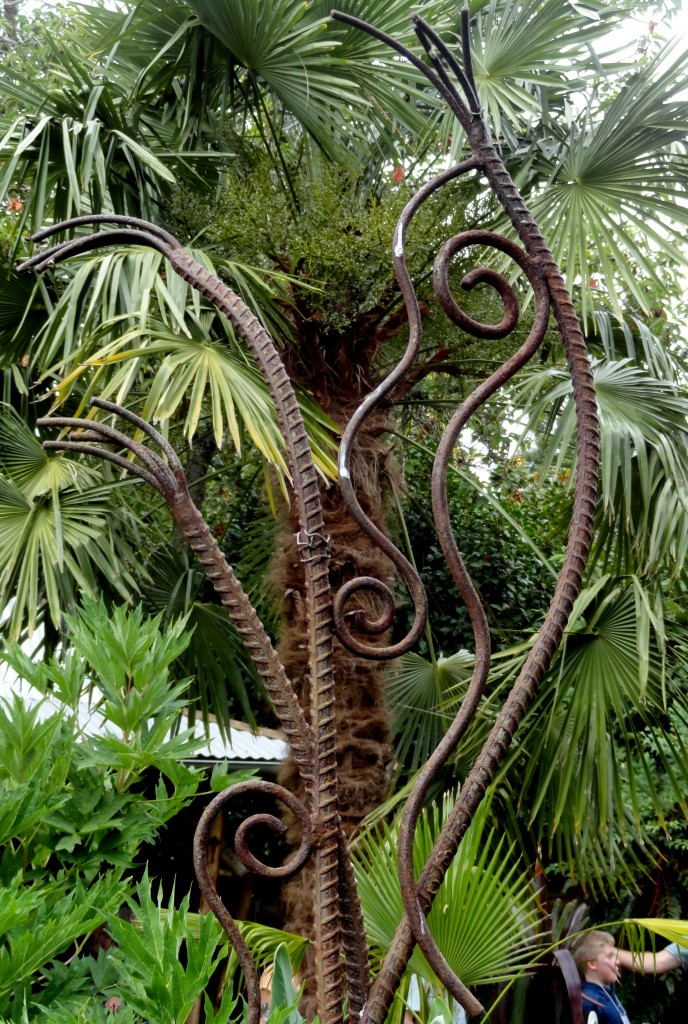 Finally a single, parting shot, of a few of the potted Agaves up on the deck. Such a beautiful garden, thank you Lance for sharing it! 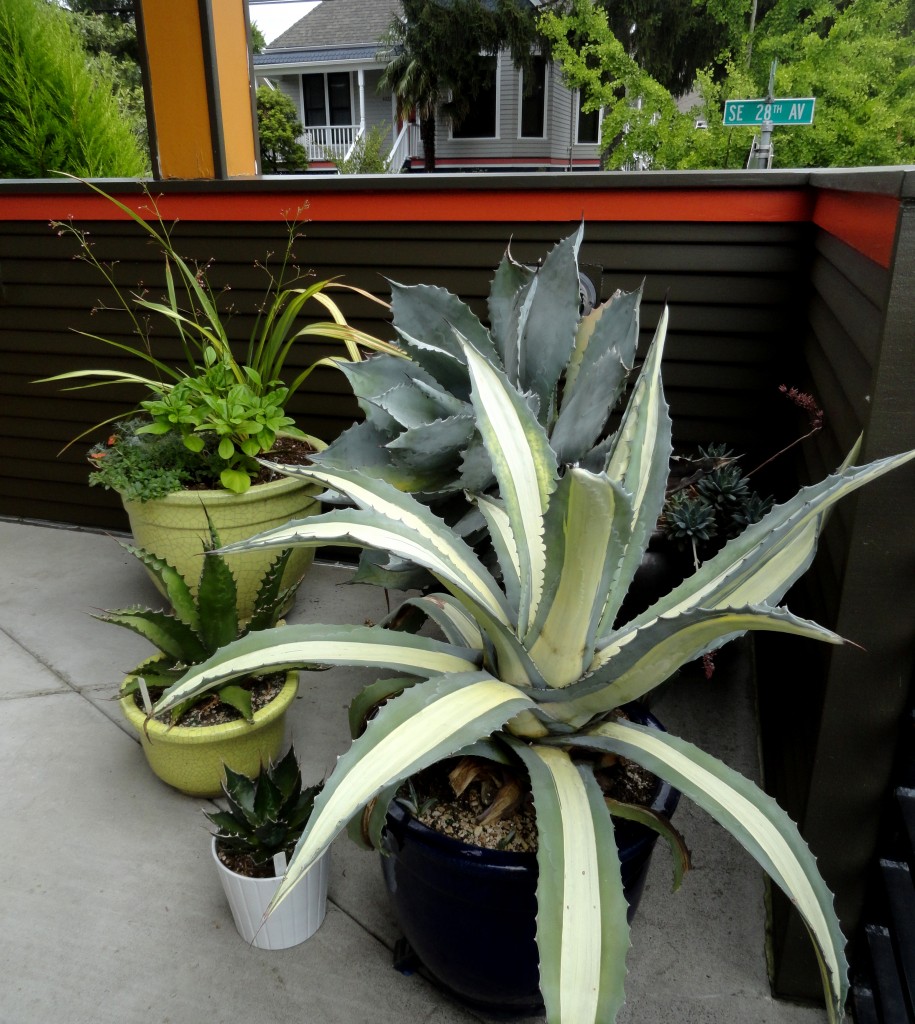 A few of the plants you may have noticed…