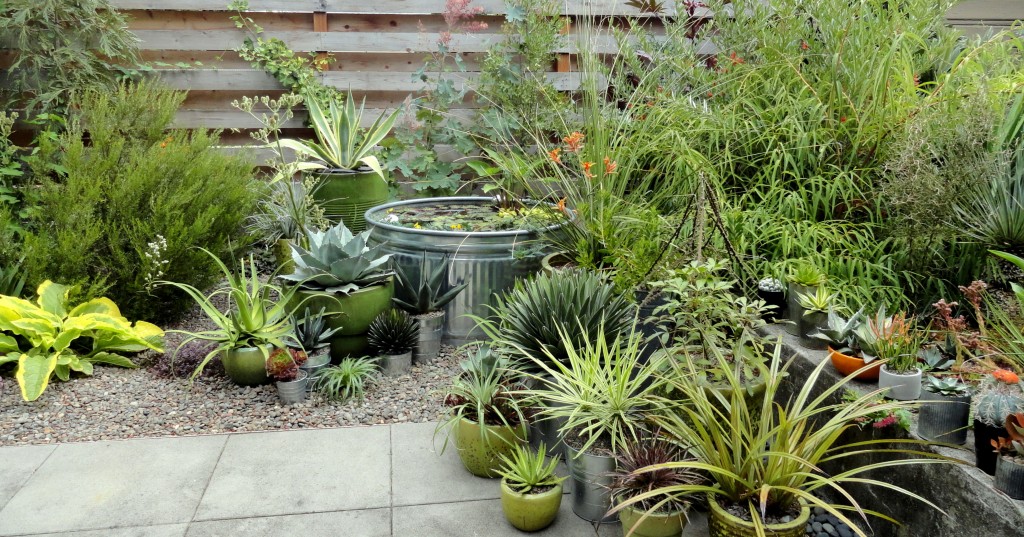 Last February I was inspired to do the unthinkable; count my containers – and thus admit that things might just have gotten a bit out of hand. I wasn’t going to take that dangerous step alone however, I wanted company and thankfully a couple of gardening friends were willing to play along. This post was the result. To refresh you on the results: Eric came in at 158, I had 228 and Grace was tops with 248.

Fast forward to July 17th when I read this post from my friends Mark and Gaz who blog at Alternative Eden. They’d caught the bug, bad. Time for a recount? Game On!

Let’s start at Eric’s place, aka Felony Flats Botanical Garden (he’s a great gardener, with a great sense of humor). As you may remember Eric’s garden is unique in that it’s movable. He’s currently renting, but looking to buy a house soon and his garden will come with him. The movable quality also comes in handy since he estimates about 75% of them need to go into his garage greenhouse each fall. 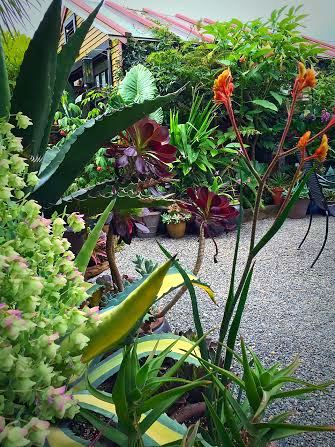 Eric says “I have been collecting containers for container gardening for about 15 years. I’ve bought most of them on sale or clearance, a lot of them are cracked or chipped.  I think about 1/2 of them came from a local shop that was closing.  I saw them tossing them into the back of a moving van to take the remaining pots to the landfill.  I ran up in front of them and told them to start loading them I to my truck so they didn’t have to pay to dump them.  It was a win win situation because they didn’t have to pay hundreds of dollars to dump broken pots and I didn’t have to pay thousands of dollars for my container collection.” 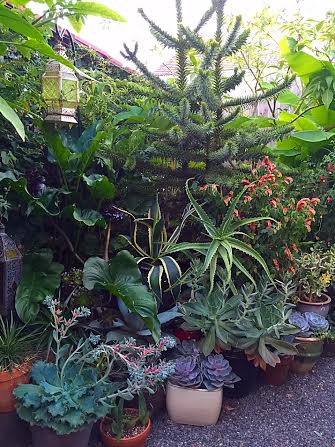 Most of Eric’s containers are quite large, all the better to create this substantial garden while not planting in the ground. 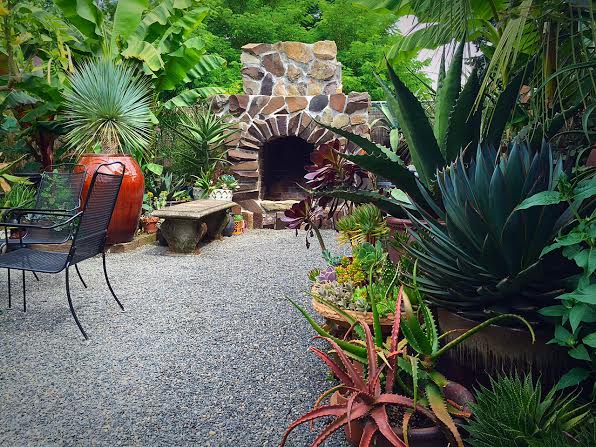 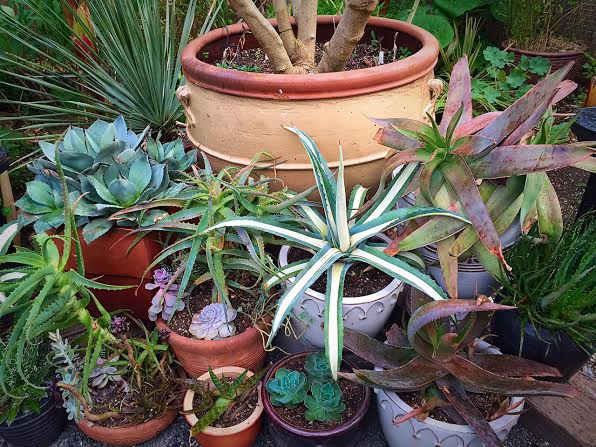 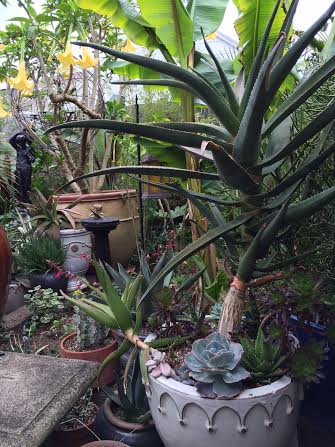 In doing this summer recount I figured Grace and my numbers would both go up, but Eric’s would remain fairly consistent, after all earlier in the season he’d mentioned publicly (on Facebook) that he wasn’t going to buy any new plants this year (hahaha). 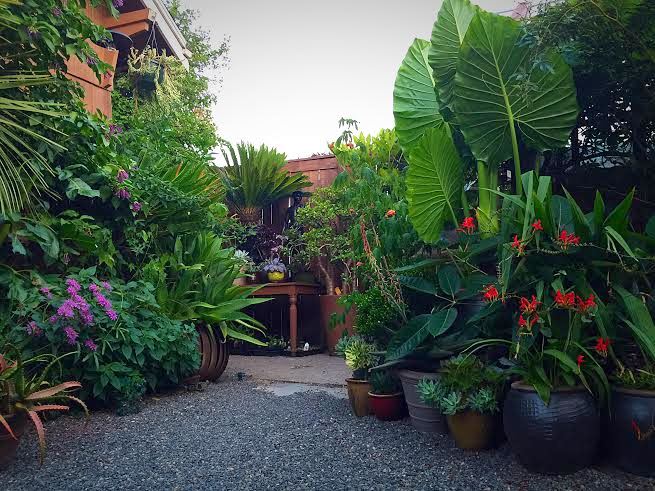 Eric’s current count = 176, that’s an increase of 18 over February. Eric said that number would have been even higher if plastic nursery containers were included in the count, he and his partner Robert have a large vegetable garden going in the driveway utilizing them. I should also add that some of that container count comes from the beautiful front garden, which is Robert’s domain.

I wonder how many people in Portland, OR, have a Brubmansia big enough to hold a chandelier filled orb? Not many I’m thinking…

So on to Grace…I think it was Grace who suggested last February that we should do a summer recount, because we both had several containers that we’d emptied before winter. A summer count would allow the full depths of our crazy to come shining through.

Those of you that read Grace’s blog Gardening with Grace know her specialty is in planting up custom, recycled containers.

Grace invited me to visit her garden last April when Andrew and I were down that way, sadly time didn’t allow for that but I’m hoping she’ll ask me back again.

Do you get the feeling nothing is safe in her garden? That anything that doesn’t move e will be planted?

Now lets talk about me! (sorry, sometimes I crack myself up)…

I really wondered where my count would fall. As I’ve shared on my personal blog I’ve been on a bit of a binge, planting up shiny metal recycled things. Also, I knew there were a few containers that had been empty last count that were now filled, like the hanging ones. Both of those things figured to up my count. 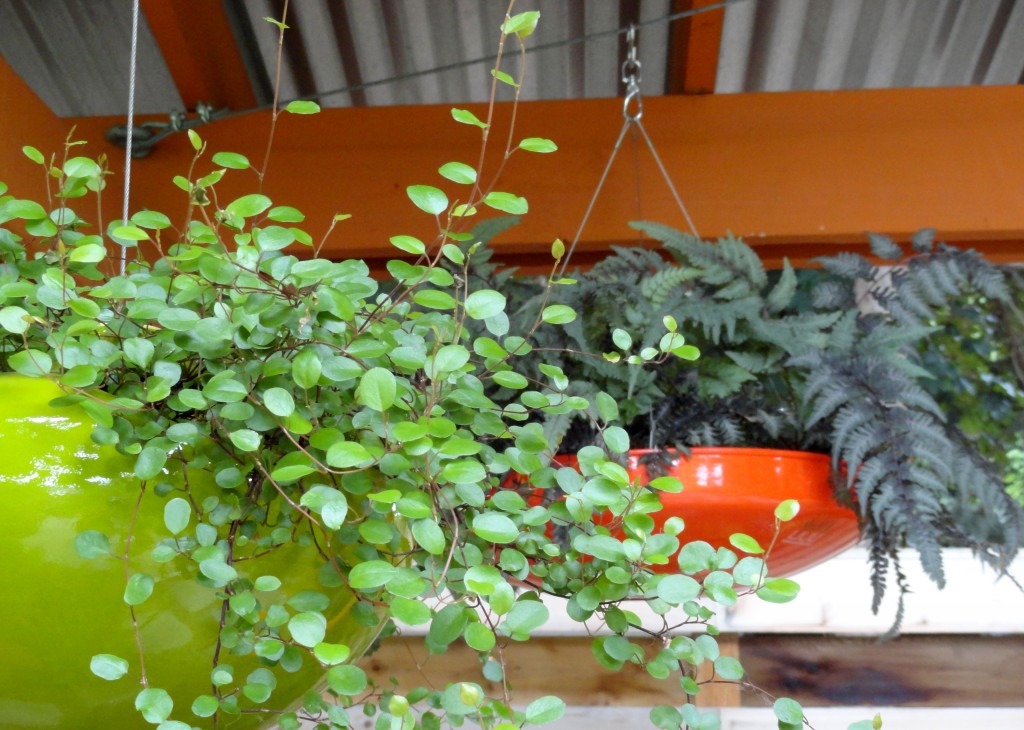 However I’d also taken advantage of a sale we Portland Garden Bloggers had in June and gotten rid of quite a few containers that just weren’t speaking to me anymore. Plants went into the ground, a few were rehomed, and yes a (very few) were replanted in other containers. 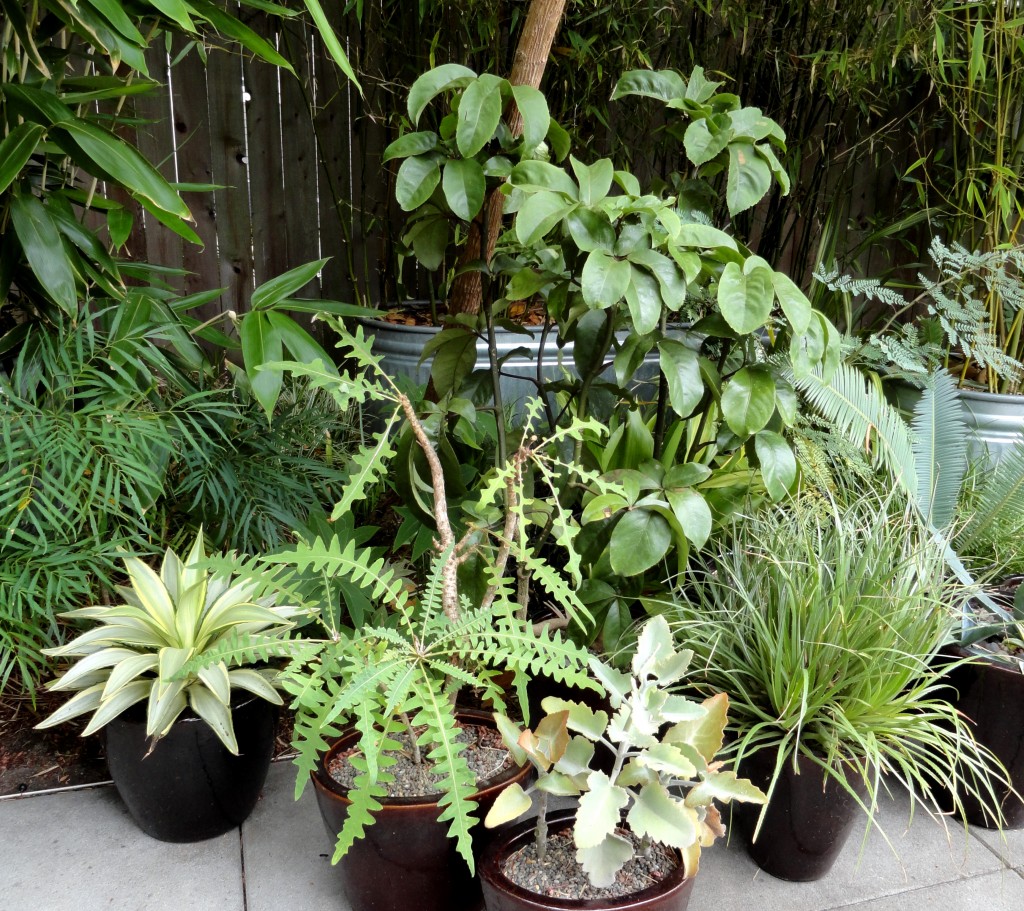 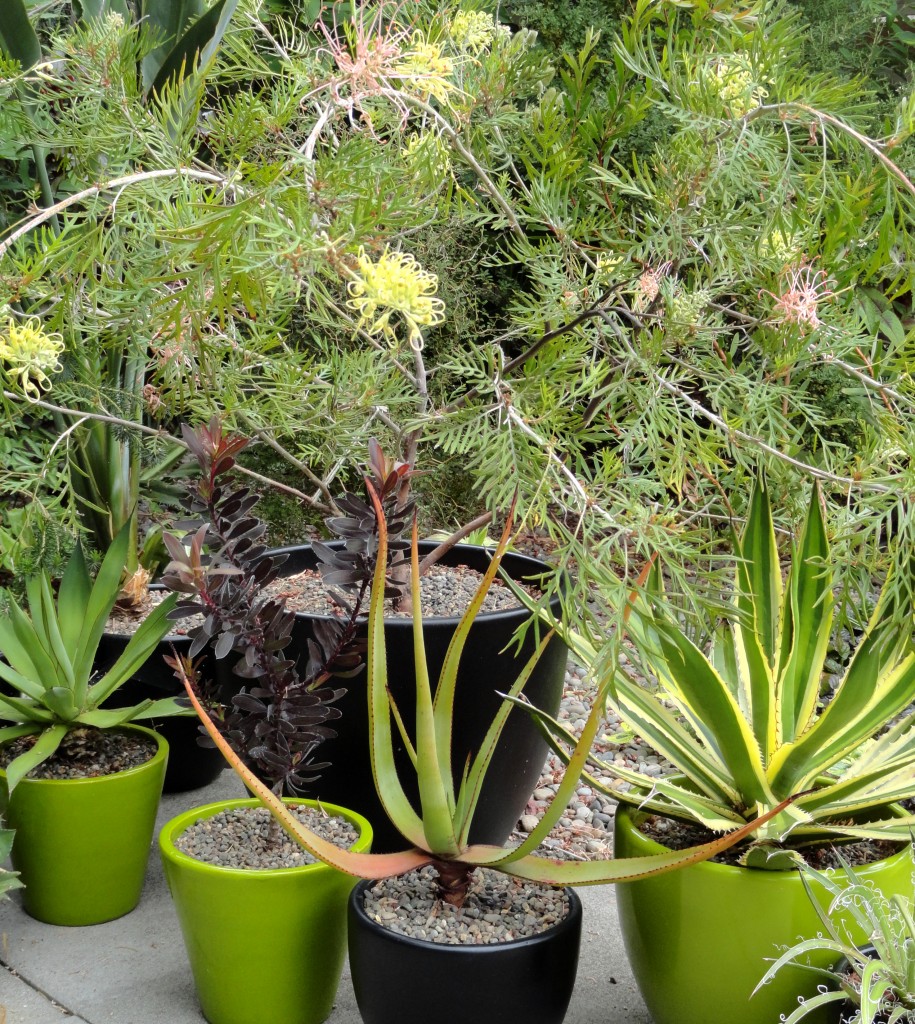 And I have to admit a couple new containers have been purchased, after all I’m only human! 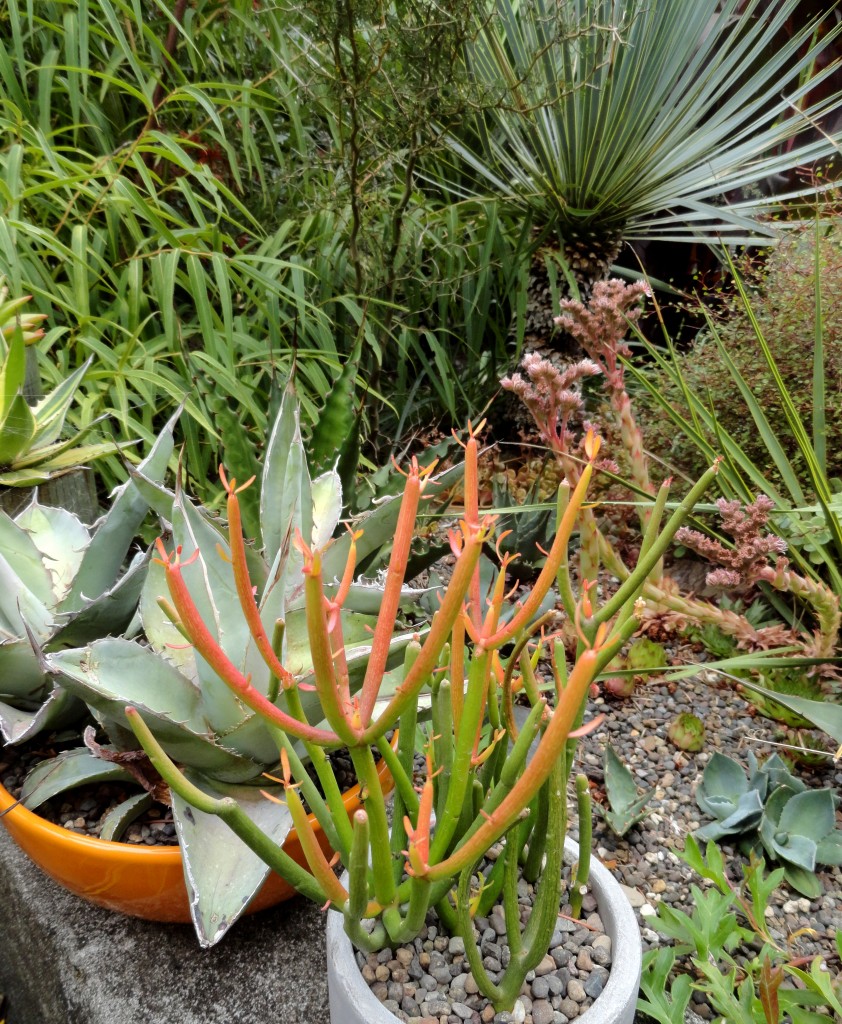 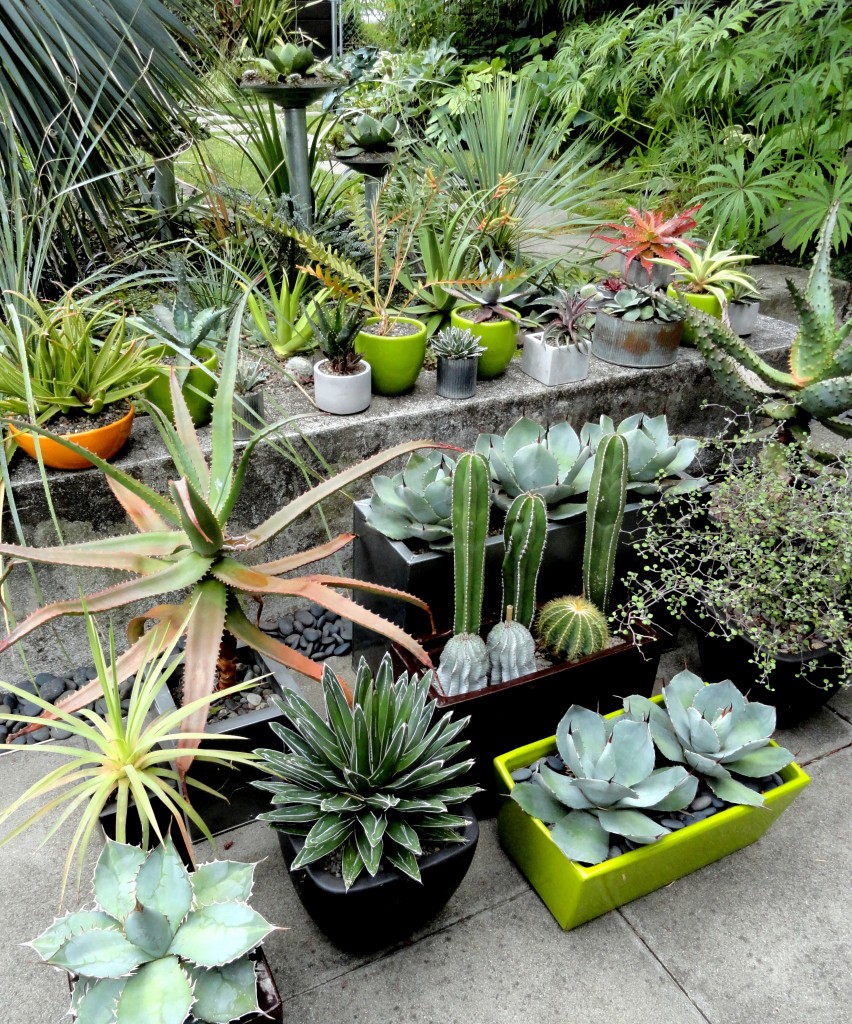 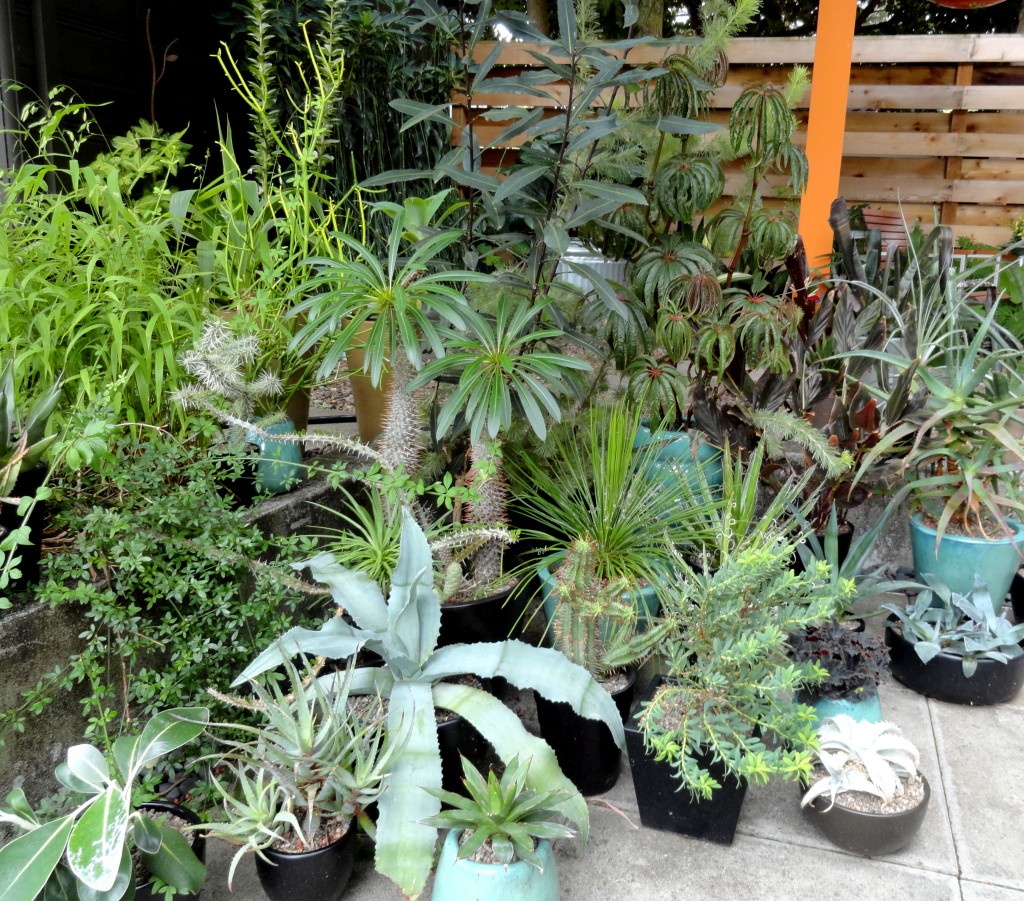 Grace is still the numbers leader! 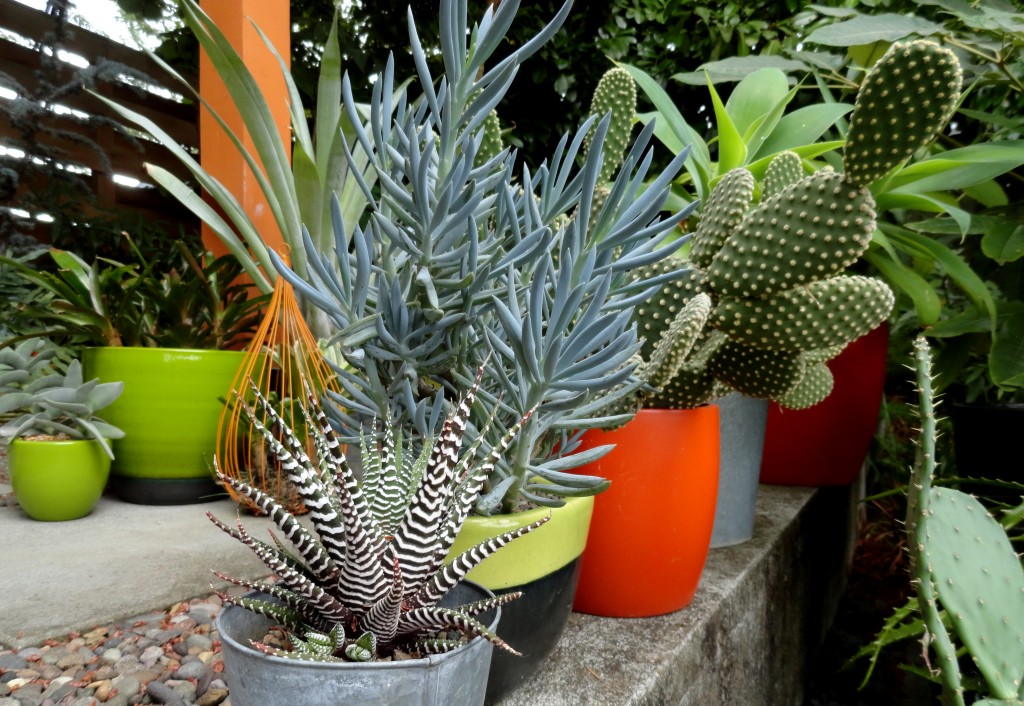 But what about Mark and Gaz, the new kids in the club? They certainly aren’t just flirting with the idea, look at this collection…

Mark had this to say on the blog post with the big reveal: “In collecting the pots I particularly went for those that are colourful, have interesting patterns and shapes, or even ones that I would never ever put in the house but is fun and great to have out in the garden instead. Mostly going for pots using mostly sense and just a little dash of sensibility. They are an eclectic mix that’s for sure.”

Eclectic, and fun. Mark also mentioned that he’d been “collecting odd pots that caught my eye ever since we came back from Portland”…it made me quite happy to read that a visit to our Portland gardens may have played a role in their new obsession.

Everytime they share a photo I find myself looking around as though I’m shopping (I’ll take that shiny silver one with the Agave bracteosa and the white one down front with the A. victoriae-reginae).

So, what’s their count? 273!!! We have a new champion of the container crazies and in fact I think they’re still going. In a recent reply to a blog comment Mark said “…really enjoyed the process of doing the display and collecting those pots. There’s more to come!”