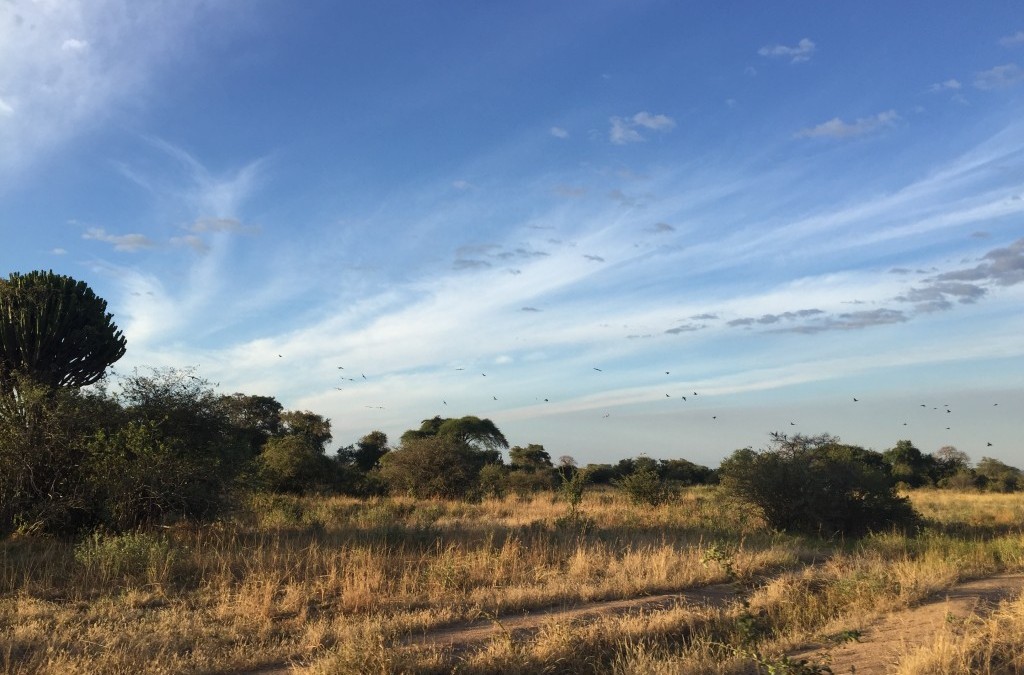 I love traveling, but one of my favorite things about vacation is coming home. It’s like a second vacation. You get to experience all the things you missed about home while you were away, with a fresh sense of appreciation. Vacation is still a fresh memory you get to relive, sifting through photos and sharing stories.

Justin surprised me with the safari as a 40th birthday present back in December. We had been batting around ideas for some sort of vacation this summer, and he let me babble on about Costa Rica or Iceland without tipping me off that he had something else in mind. He had done a bunch of research, picked out a camp, and stashed some extra vacation savings on the sly.

It was an incredible idea, and I’d always wanted to go on safari, but as a professional-level worrier, had a long list of concerns I needed to check out. It takes several months to get safari details all worked out, so I had many hours to google things like “snakes in tents,” “sleeping sickness symptoms,” and “hippopotamus attacks.”

Now that it’s done, I have to say, it was nowhere near as scary as what I imagined. I’ve only been on a driving safari Ruaha National Park, so these things probably vary from place to place. And I’m still scared of a boat and walking safaris. But if you find yourself planning a trip and wondering what to worry about, here are a few things I didn’t need to worry about.

Will the tiny propeller planes be scary?
I’m a nervous flier in most situations. I’m nervous in most situations. But actually, the small planes weren’t too bad. Because they operate sort of like an airport shuttle van, it’s just a low key affair without all the usual airport stress. Everything is so small and so close, there’s no mystery about what’s going on in the cockpit. Seeing all the things the captain does, seeing clouds before you fly into them and feel the turbulence, and being able to watch out the window for elephants, giraffe, hippos during takeoff and landings, it was all fairly reassuring. 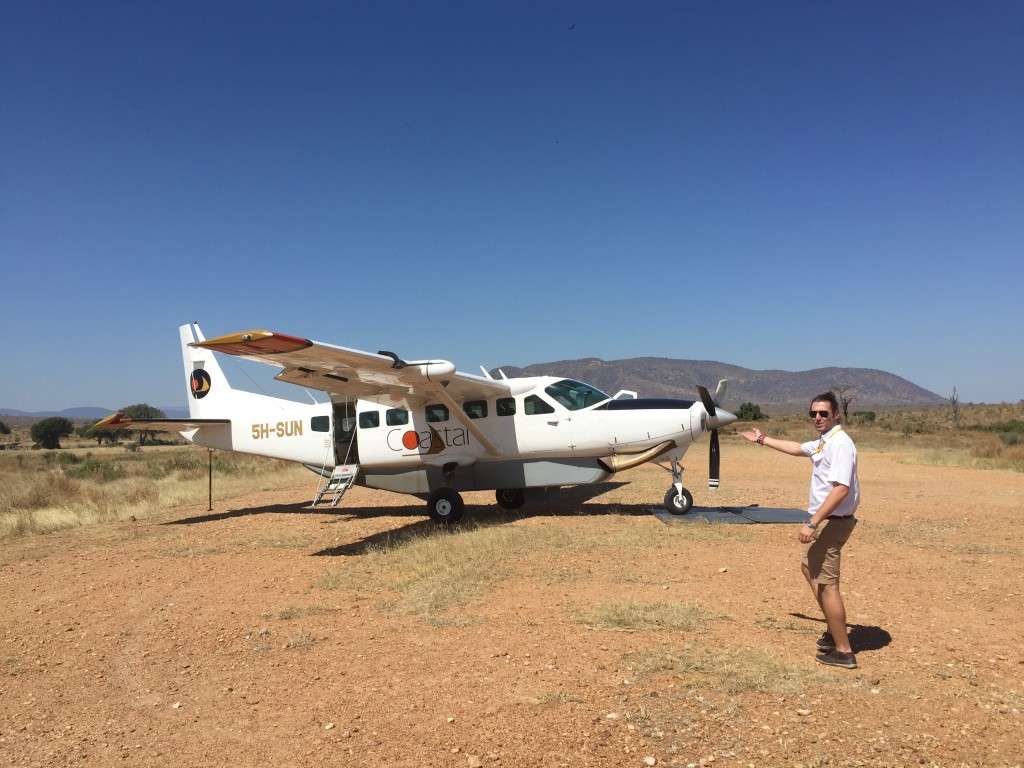 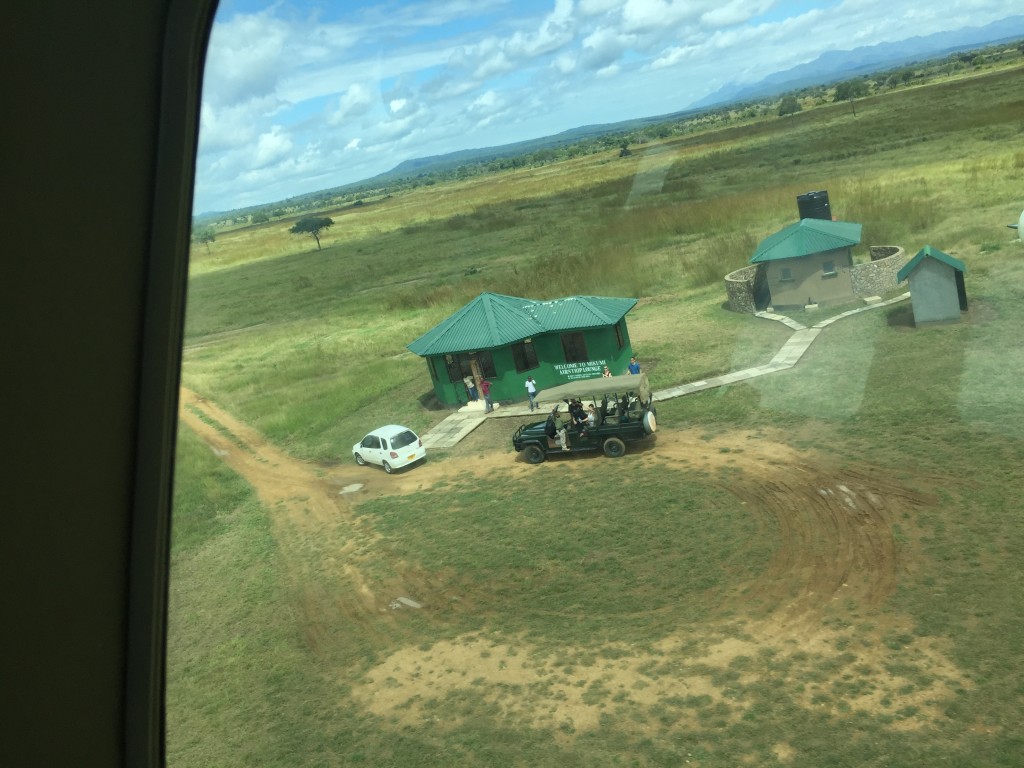 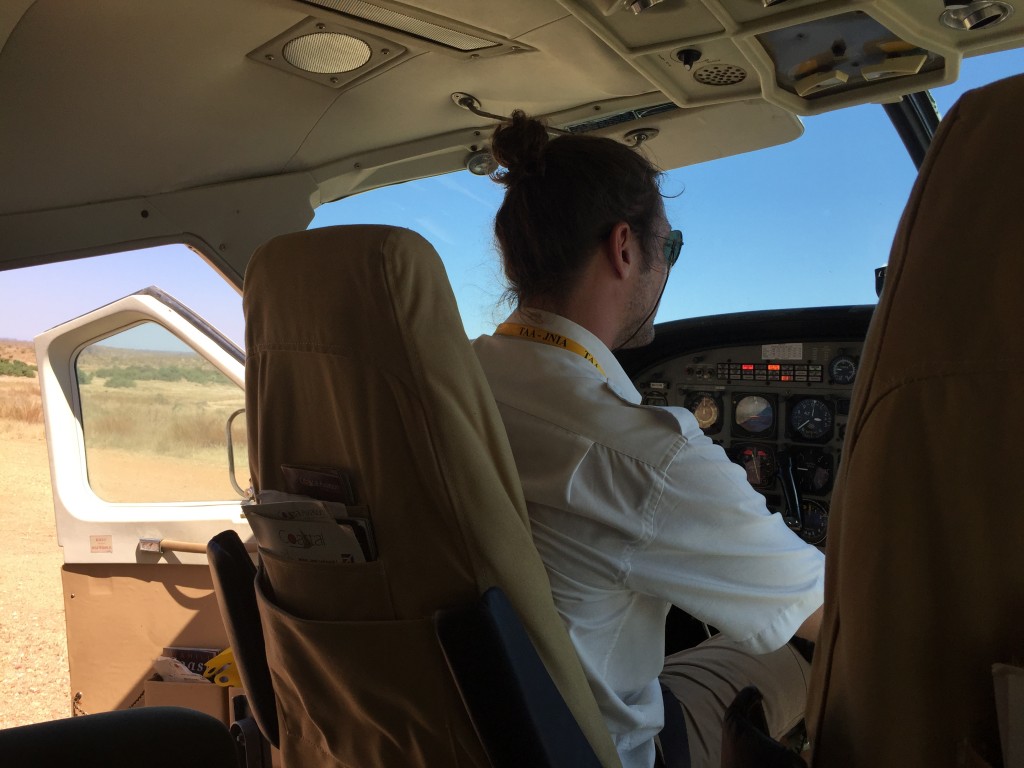 What if I have to go to the bathroom in the middle of nowhere?
On the reassuring side of things:
The park has little outbuildings with flush toilets scattered throughout, and the guides planned a couple stops during the drives. We did encounter one hole-in-the-floor style toilet, which isn’t as difficult as I had imagined. Most were regular toilets.

But be prepared:
Most were equipped with soap, paper towels, and toilet paper. However, I was glad I brought kleenex along for the un-stocked bathrooms. All the bathrooms had sinks but not always soap, so I used hand sanitizer I brought with me. 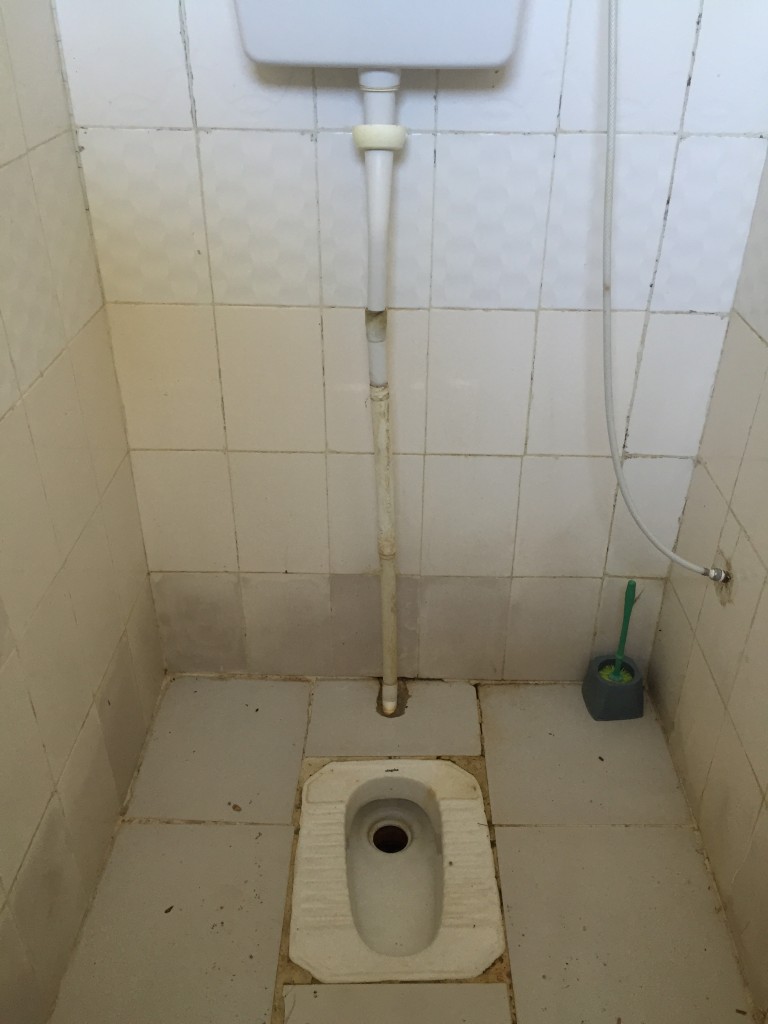 Will I get sunburned to a crisp?
I burn faster than anyone I know. I was religious about sunscreen during the entire trip, and we were under the roof of the car most of the day, and I didn’t get burned once. Then I came home and visited people out in the Portland sun without sunscreen for an hour, completely forgetting that you can get sunburned back home. And now I am a fine lobster red.

Will critters get in the tent?
You keep your tent zipped up at all times, so there are mostly no issues. The tent is on a poured cement platform not right on the ground, which offers some protection, although some animals might get beneath tent floor on the pad, so you still keep an eye on the ground so you don’t step on a tail. Because the tents had just recently been cleaned out to kick off the camp season, a lizard managed to find his way into our tent. We shooed him out out in a likely hilarious scene with us city folk waving a lantern and umbrella until he ran out the flaps. After that, all the lizard activity was outside the tent or in the open bathroom section, but they would scamper away when they saw us. You could hear the pitter patter of their feet on the roof outside. This bugger was on our porch. 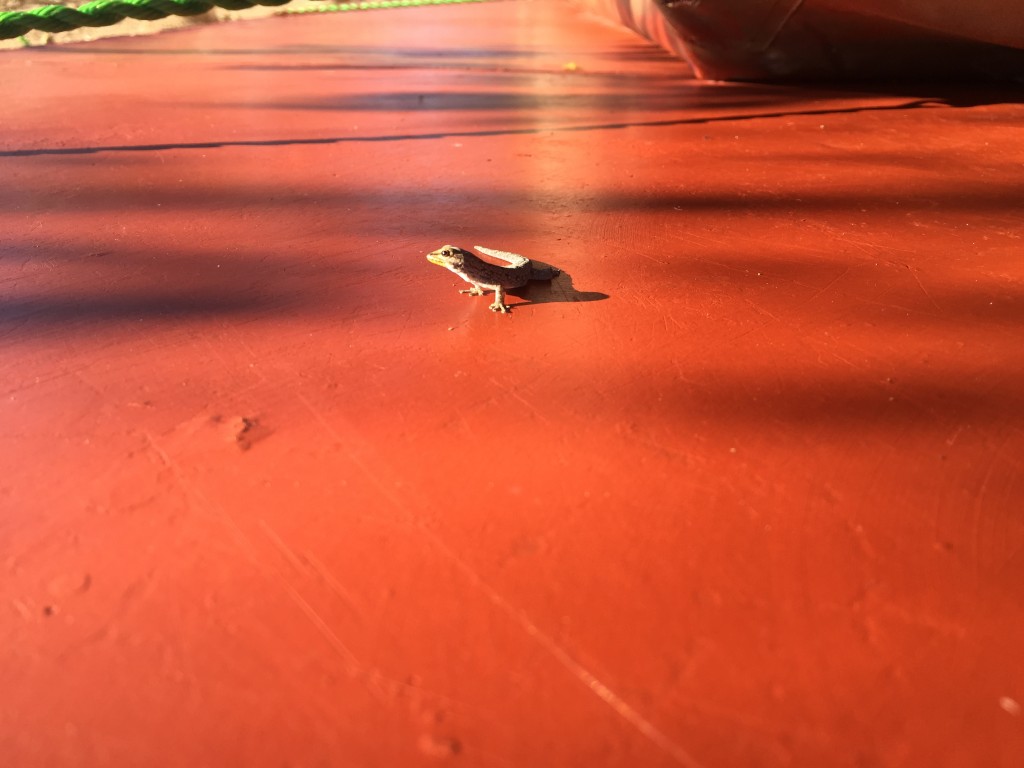 We also saw some little adorable frogs on tents, especially when unrolling a propped up window or door screen. 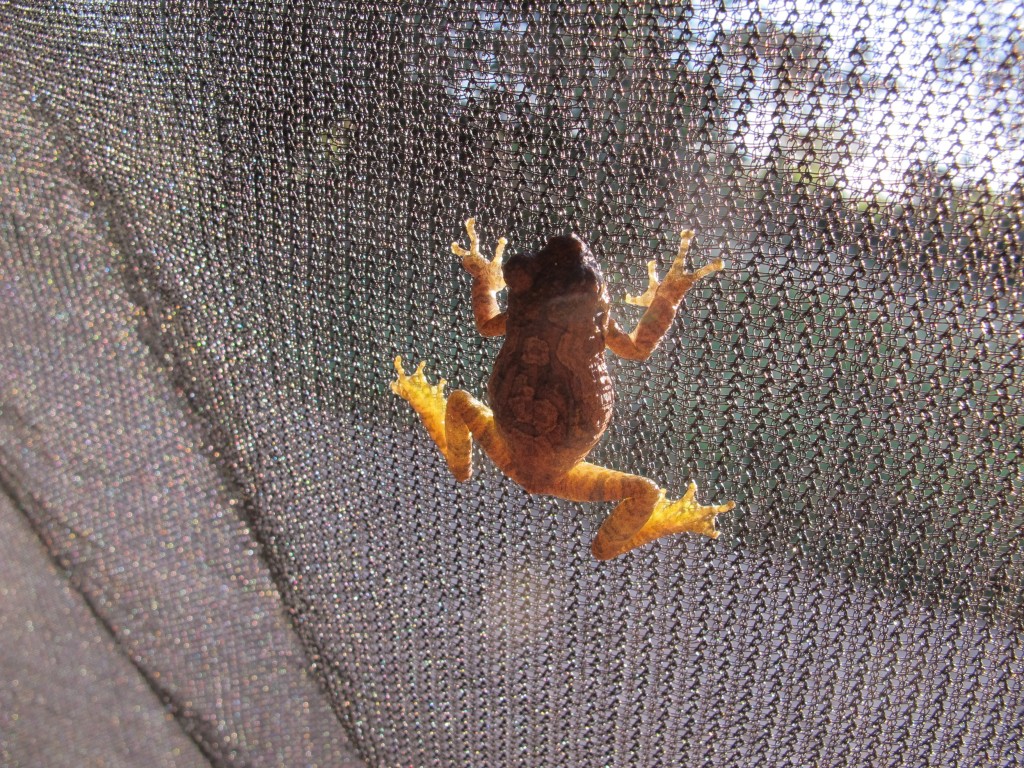 How bad are tsetse flies?
Better and worse than I thought. They’re present in Ruaha, but eradicated in other places. They’re small like regular houseflies, and they can be thick in certain places. While we were driving they were mostly not a problem but when we stopped for photos they were on us. I used my scarf to flick around my shoulders like a tail and that helped a lot. I also wore deet religiously. And still got a few bites. But they’re quick and not very painful, sometimes I couldn’t tell if I got bit or a grass seed kicked up from the road and flicked against me. Fortunately I didn’t have any sort of reaction after the bite, some people get mosquito type reactions. Oh, and I didn’t see any mosquitos at all on Safari.

The tsetse are attracted to blue and black, and the park hangs poison treated flags around to attract and kill them. And our drivers sometimes lit a can of elephant dung on the truck to help drive them away. Also the burning dung didn’t smell bad at all, if you are one to worry about that sort of thing. 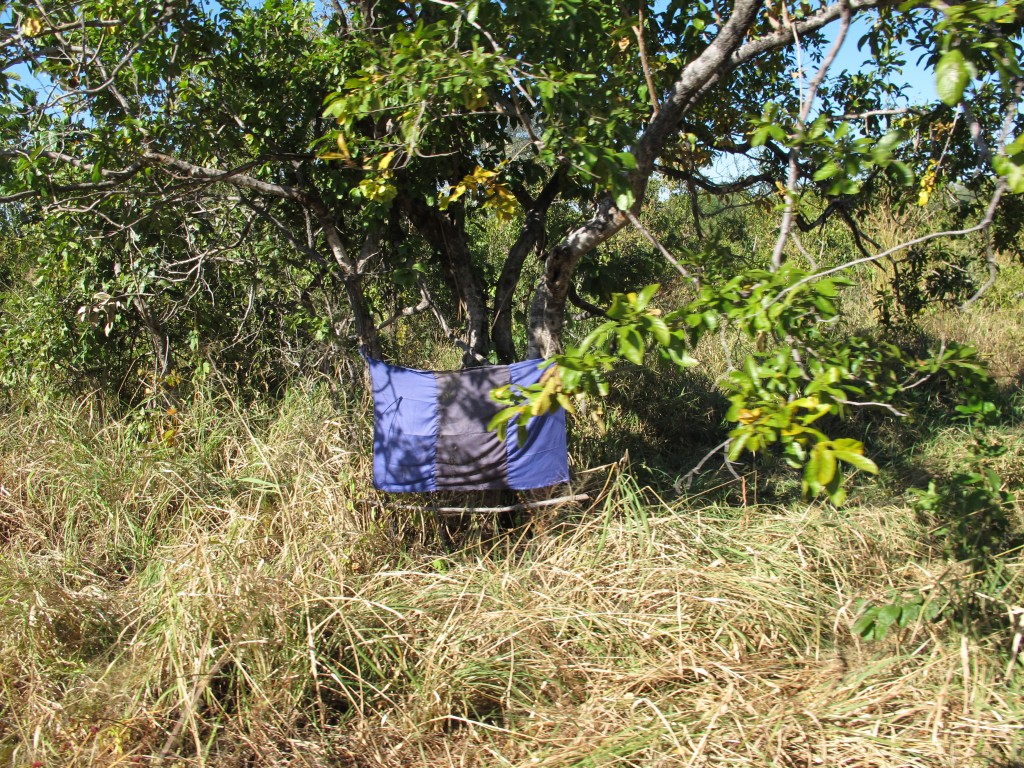 What about food?
First off, I did not have to worry about going hungry. We were so well fed I was stuffed the whole time. Food restrictions were a bit trickier. I have a friend with severe celiac’s disease who can’t eat anywhere with a kitchen that has gluten in the room. I don’t know that she could do this trip. I don’t really eat bread or pasta at home because it makes my skin break out and gives me the itchies, but it’s not a disaster. But bread was everywhere. In hindsight, I should have skipped the dinner rolls, since there was plenty more good food to come. Breakfast was a little more challenging, with toast and crepes with jam. I think I’m now made of starches. But when you’re signing up for a safari, they ask you about food restrictions and they plan the menu around you. Justin eats more things than I do, and he simply said “vegetarian” which they totally handled, but if I had been doing the planning, I would have been a bit more specific. Still, it was all delicious and plentiful and beautifully presented. 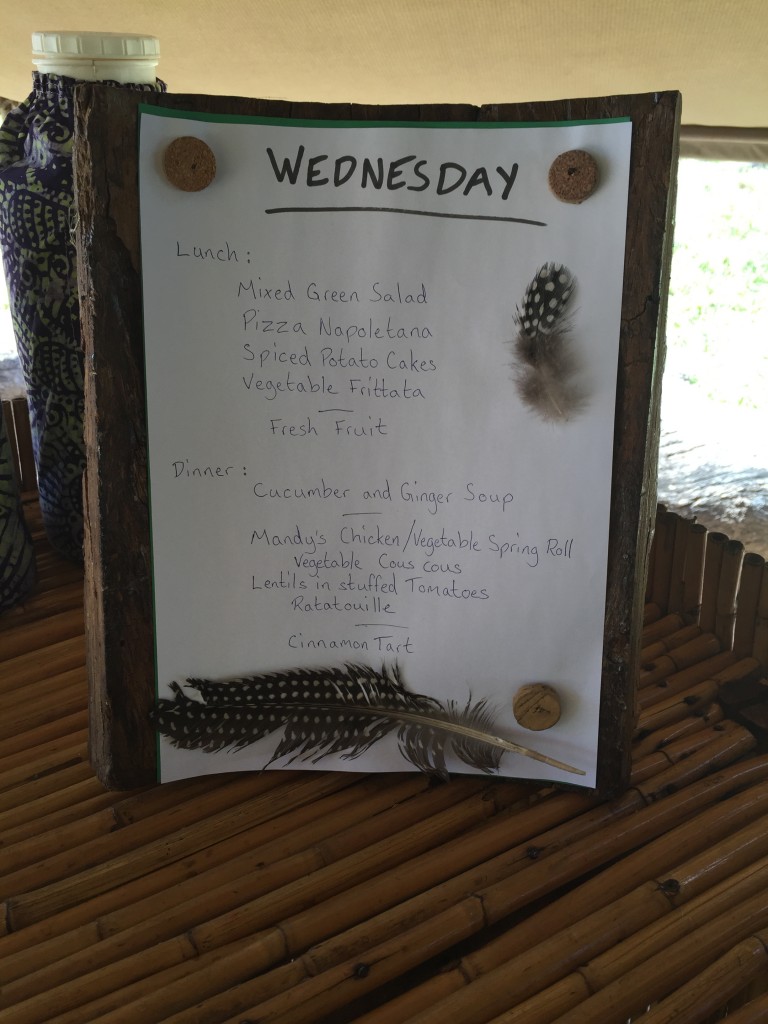 Will we be dodging dangerous animals 24/7?
Actually, we spent a lot of time looking for animals, and sometimes went hours without seeing any big ones. I pictured lions on the hunt all around, but the few we saw were sleeping in the day just like a house cat. I also thought if you stepped out of the truck, you would be ambushed and eaten, but the guides knew when and where it was safe to get out and walk around, and we had some relaxed picnics in the bush, so my vision of lions constantly jumping out of the grass were not founded. Apparently the animals are mostly scared of humans and don’t want to approach. You just don’t want to do things like go for a run or see an animal and get scared and turn your back. There were a couple moments I was nervous when our car startled animals for a minute, but they were isolated and brief, certainly not a constant adrenaline rush. But if you are into birds, those were everywhere and amazing. 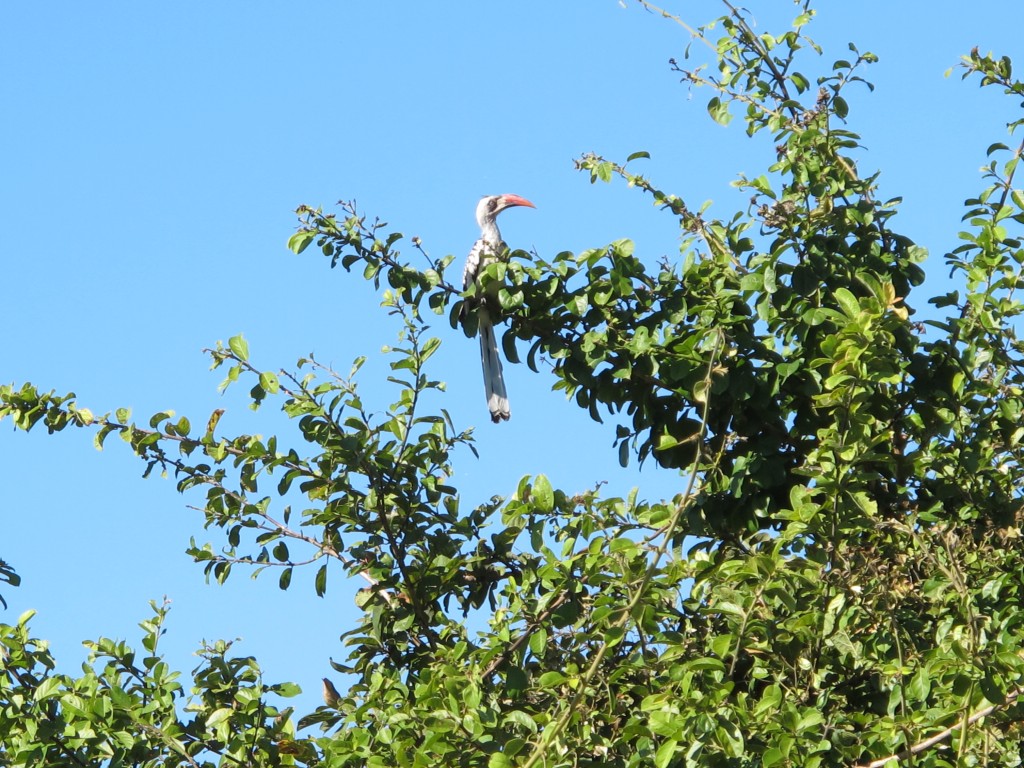 And as I mentioned last week, the plants were incredible. I kept getting flashes of red in the brush, which our guide Prosper identified as a toothbrush flower, and he picked one so I could see it close up. And notice he isn’t eaten by a lion. Pretty cool right? 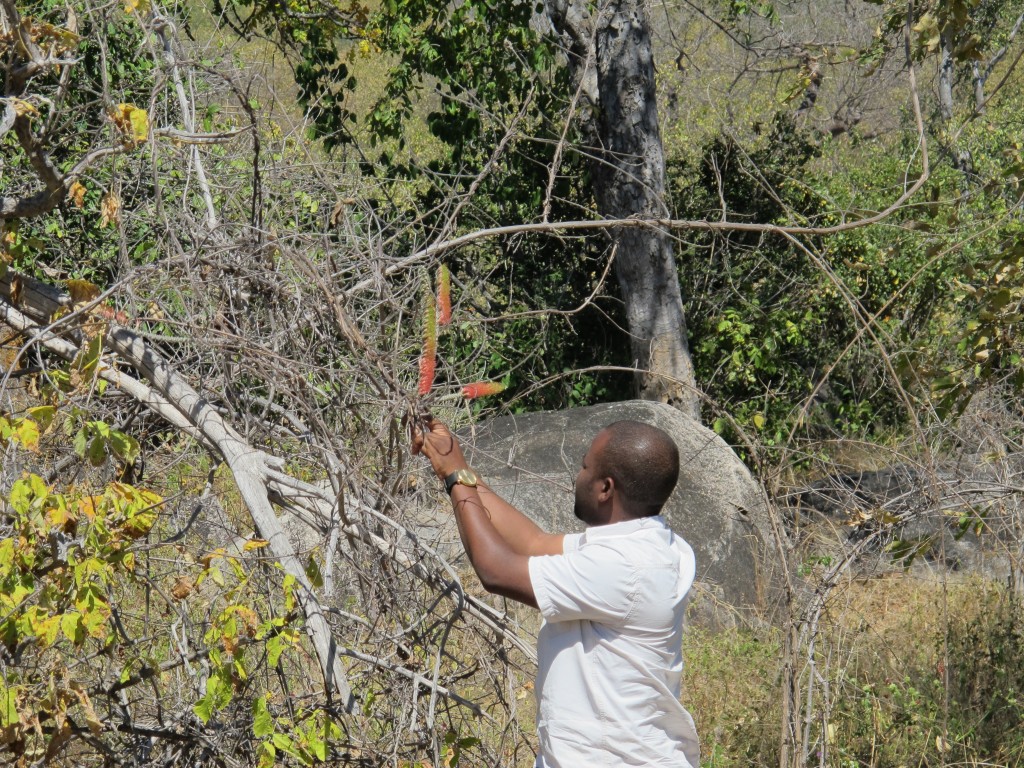 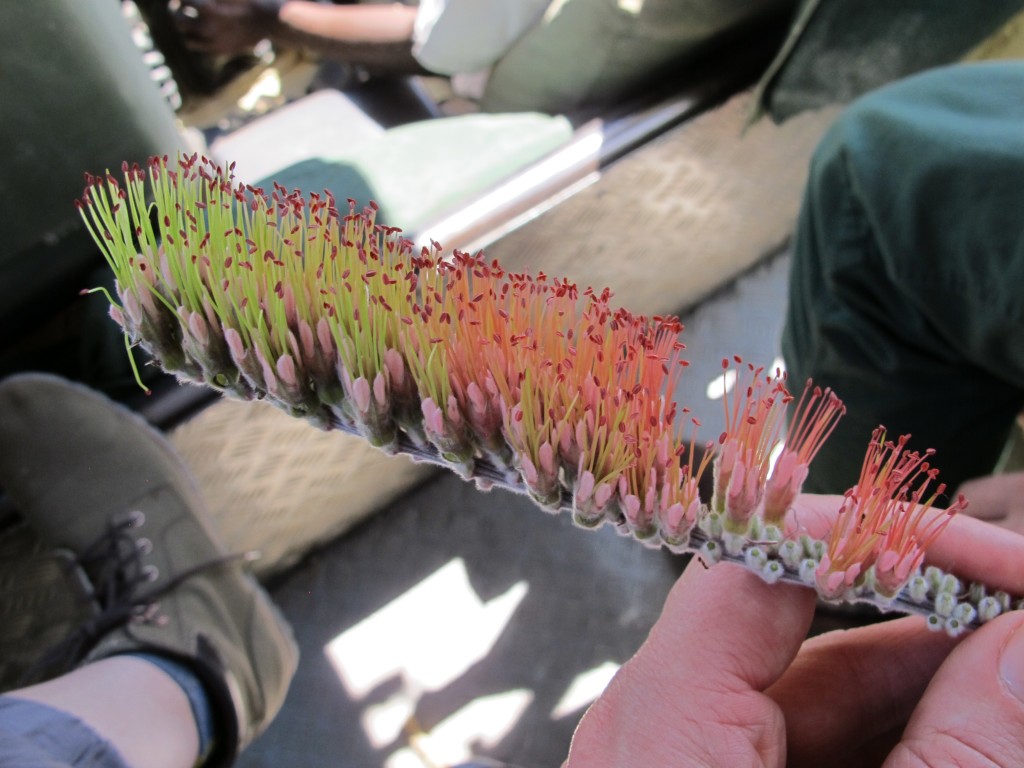 And I’ll leave you with a shot of the sausage tree I didn’t manage to successfully upload last week. 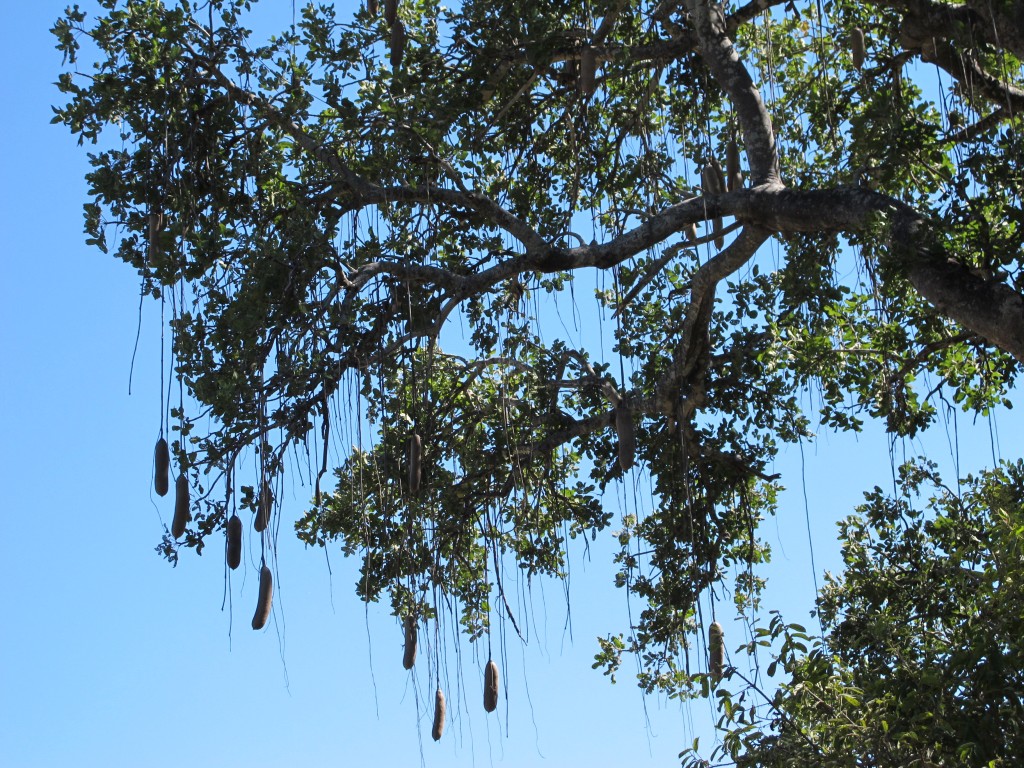 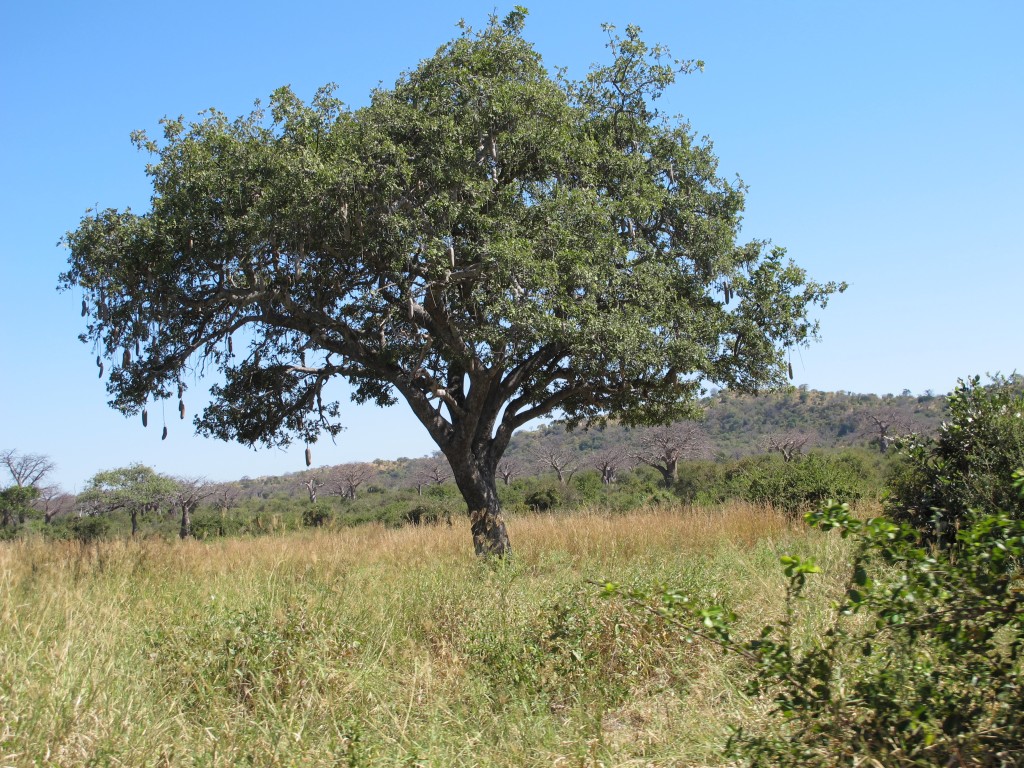 So in hindsight, even as a scardy cat, it was not a scary experience at all. The 30 hour flight is no fun. If you are in a position to go business class, I’m sure that’d make all the difference, but that was way out of our price range. Other than that, it was all incredible. Definitely do it if you get the chance.