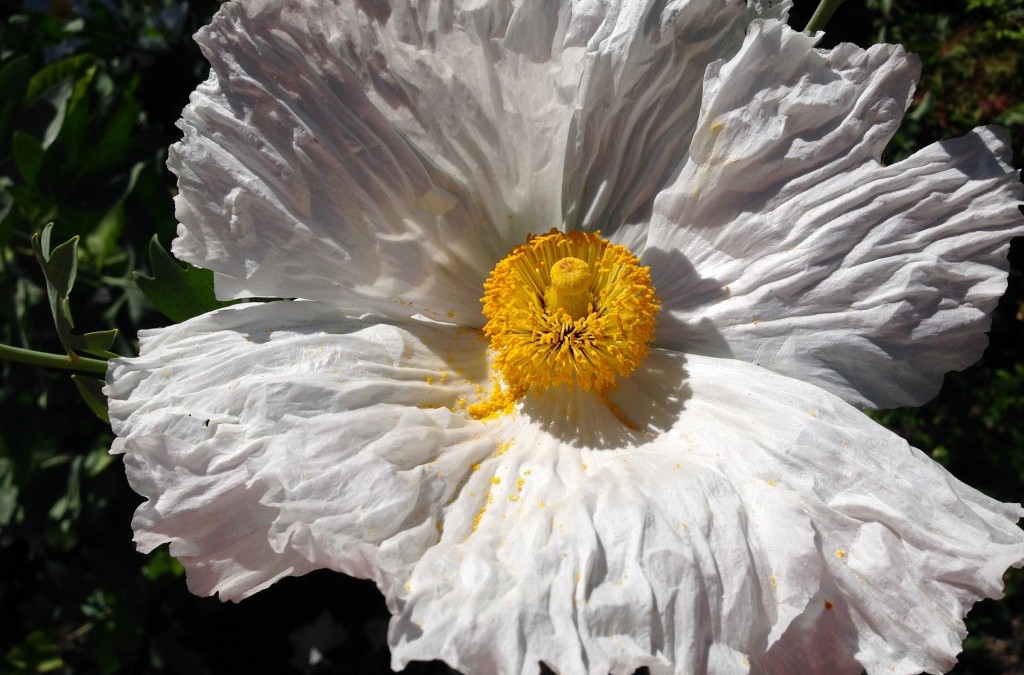 A couple weeks ago, I watered the Danger Garden while Ms. Loree was off at the Toronto Garden Bloggers’ Fling. Before she left, she picked up some glasses for me at IKEA, reward aplenty. But then, she insisted, positively insisted, that we head to Cistus Nursery for an additional plant treat. It would have been rude to refuse, right?

I try to get to Cistus several times a year, but it’s been some months since I’ve made the trek. It’s not far from where we live, just under 40 miles–a gorgeous 40 miles, at that. But it’s a great time of year to make the drive to Sauvie Island, the largest island on the Columbia River. You can see scads of nesting Osprey, every sort of bird really, and plants and farms galore. It’s beautiful country I sometimes forgot is right in my backyard.

And as usual, an aside. Aunt Mary took a bunch of us kids fishing at Reeder Beach when I was little, maybe 6 or 7. She must have hit the fish on the head when she cast her line. My brother David, two years older than me, swore that wasn’t his pole. He somehow didn’t like the looks of it. So Aunt Mary stuck the pole in a holder while we argued about who was going to use it. Then the pole fell over and hit the sand. Aunt Mary picked up and rinsed the reel in the water, and she yanked and pulled and walked up and down the beech trying to getting it unstuck from an obvious snag. Shortly thereafter, she pulled in a giant Salmon, a big one, I swear. Guess who claimed it was his pole then? Uh huh, him, David! (This photo is tangentially related. A totally separate trip from the fishing incident, but there’s David, Bobby, and me. Photo was taken in Scappoose–on Highway 30. And I would be remiss in not mentioning that Bobby lives in Clastkanie now, on Highway 30, but some 60 miles beyond the Sauvie Island bridge. And he commutes to Portland!)

I’ve lived in Portland my whole life, and to this day, it surprises me how quickly you leave city and enter country when you head north on Highway 30. Our good friends, Dennis and Kathy live 20 miles north of the Sauvie Island, in a little berg called Warren. When they were still making the daily trek to work, they thought nothing of the drive. But when we go out to their place for a visit, we plan and plan as if we’re going on vacation. And why wouldn’t we.

I guess we went past past the bridge to Cistus for now, for a quick tour of Dennis and Kathy’s place. There are a lot of good directions to go when you head north–I suppose similar to my story-telling style. Irish girls must tell stories; it’s genetic. (I hope I amuse you half as much as I do myself). But that Highway 30, you can take it all the way to Astoria which sits at the mouth of the Columbia River. ( I have a childhood story about this too, but I’ll restrain myself, for now.)

One of the first gardeny attractions is in Linton on Highway 30, where there’s a great feed store. (Unless you turn sooner, and visit Bob Hyland’s garden. He usually holds an open garden thru the Hardy Plant Society of Oregon HPSO. Open gardens, a premier benefit of  joining.)

I ordered a round stock tank from Linton Feed & Seed recently, and they actually called me when it came in. Not everybody does. (I think this is near where they stop traffic on the Highway 30 for the annual frog crossing. Seriously. I’ll look it up and get back to you.)

We won’t linger at the feed store, but you know I want to. And we won’t stop at Mean’s Nursery, but honestly, if you get out that way, you should. You never know what you’ll find, but sometimes they have the best bargains on unusual plants. I once got Red Bananas in 4″ pots for $2.69, and they grew into full sized plants in one season. I still have one, in fact. I over winter by yanking it out of the soil and throwing in the basement. That’s it below.

On the road again. Here’s Dennis and Kathy’s house. I’d should have taken the time to get a better picture, but I’m always so excited upon arrival.

Pictures cannot begin to do justice to this Clematis combination. Dinner-plate sized blooms. Plants from Joy Creek Nursery just down the road. (Aren’t you glad I didn’t stop there on this trip, as is my wont.)

At the entrance, Clematis mingling joyfully.  But of course! They’re from Joy Creek Nursery.

And Dennis & Kathy have chickens.

And a BIG Gunnera happily situated in its grotto.

I finally got that Mojito Kathy promised, but that’s only because she’s a little Irish Rose, too, and needs to tell a lot of stories. Plus she was making us these great beet fritters. And there was champagne to tide me over while I waited. The men had gone straight for home-brewed beer. That’s right, out here in the Pacific Northwest, there are pubs on every corner, and also in peoples’ homes. Bigfoot and Beervana around these parts. Yep.

And they have this nice Saracenia, and a Koi pond, which I forgot to photograph. Nor did I take a picture of the goat, H.I.

The men out in the north forty–well, technically, the east forty. The Columbia River is out there beyond the tree line.

And a bunch of healthy indoor plants too. The Ficus is one Kathy rescued from a previous job, eons ago. And Dennis has a collection of plants that would do Rare Plant Research proud. 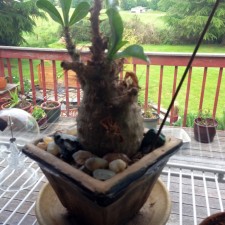 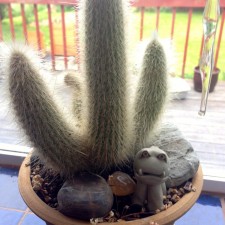 Cactus with a little monster. 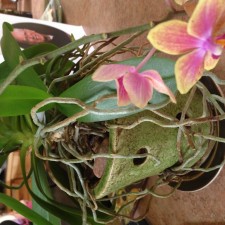 Dennis coaxes blooms from his Orchids every year. What?

So, I guess I’m a bit off track, other the theme of a grand day out. I meant to write primarily about Cistus Nursery. But since I’ve waxed poetic for so long here, I think I’ll get back to that story next week. Unless I forgot, and write about something else. In my defense, I have a concussion, and it’s a riot in this brain.