Gardeners and gardens on the big screen… 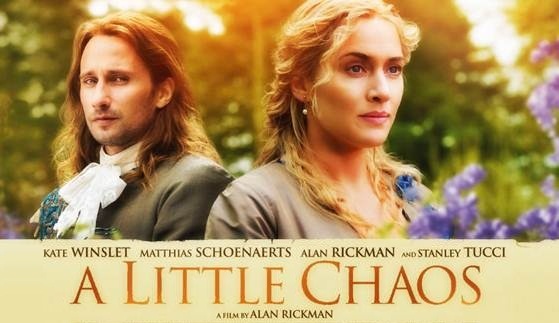 It’s time for those big summer movie blockbusters: superheroes, dinosaurs, car chases and gardens. Wait, what? Gardens? Ya, when was the last time a garden (or gardener) played a key role on the big screen?

Monday night I was invited to a free screening of A Little Chaos, a new movie directed by (and starring) Alan Rickman along with Kate Winslet, Stanley Tucci and Matthias Schoenaerts.  The plot revolves around a fictional character by the name of Sabine de Barra, played by Winslet, who works as a landscape designer. She applies, interviews for, and is awarded a job designing a garden at Versailles. I won’t be giving too much away (you’ll already have assumed as much, right?) to say there’s a romance, a tragedy, a villain and mud, lots of mud (after all it is after a movie set partially in the garden).

Some of the historical name dropping in the movie was lost on me, but not on Tim Richardson, who wrote a review for The Telegraph: “A Little Chaos: a true gardening film.” As Richardson seems to point out – this movie isn’t going to be a hit with the general public (there isn’t a single car chaise, although those horse drawn carriages do gain some speed at times, and there’s a thrilling scene with two carriages passing on a narrow road) – but for those of us who are startled (and a little thrilled) by hearing the word “perennial” bantered about repeatedly on the big screen it’s the best kind of summer movie.

I must admit that lavish period pieces with fancy costumes, big wigs, and surfaces covered in gold-leaf have never appealed to me, however this one was rich with visual detail that I really enjoyed. What the film lacked in substance it made up for in flash with foliage, and who doesn’t enjoy a little flash and foliage now and then?

Since we’re on the subject of gardeners, and gardens, in the movies I thought I would share a couple of interesting lists and links. The first, “Eight of the best gardens in TV and film” also comes from The Telegraph (those folks in the UK really do “get” gardening). No doubt readers in the U.S. will have a little trouble tracking down a few of the titles but, like gardening, sometimes the thrill is in the hunt. The second isn’t so much a list, but a category on one of my favorite gardening blogs, A Growing Obsession. It’s author, Denise, regularly chronicles movies worth watching in Cinema Botanica. Her review of The Green Card is better than the movie itself.

So have you seen, or do you hope to see, A Little Chaos? Do you have a favorite movie where gardeners and/or gardens play a role?