The Front Yard Food Revolution comes to my neighborhood 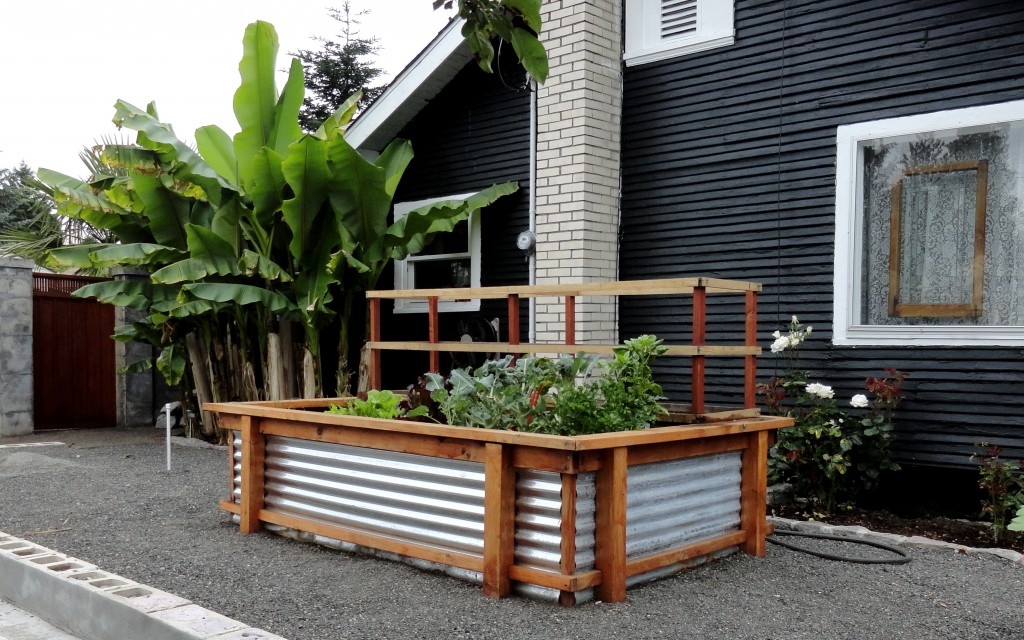 It’s been quite exciting, watching new planter boxes go up all around me. For a couple of weeks it seemed every day’s dog-walk yielded a new development. Then came the plants, tomatoes, peppers, herbs, strawberries, lettuces, kale…no wonder I’d come home hungry. Now that we’re almost in June (!) things are starting to settle down and I’m having fun watching things grow…

This hell-strip garden, planted in the square-foot-gardening model, was one of the first in the ‘hood and has been around for a few years now. It’s designed, planted, and maintained by a young family. I was skeptical at first, with all they have going on, that they’d keep up with it but they have. 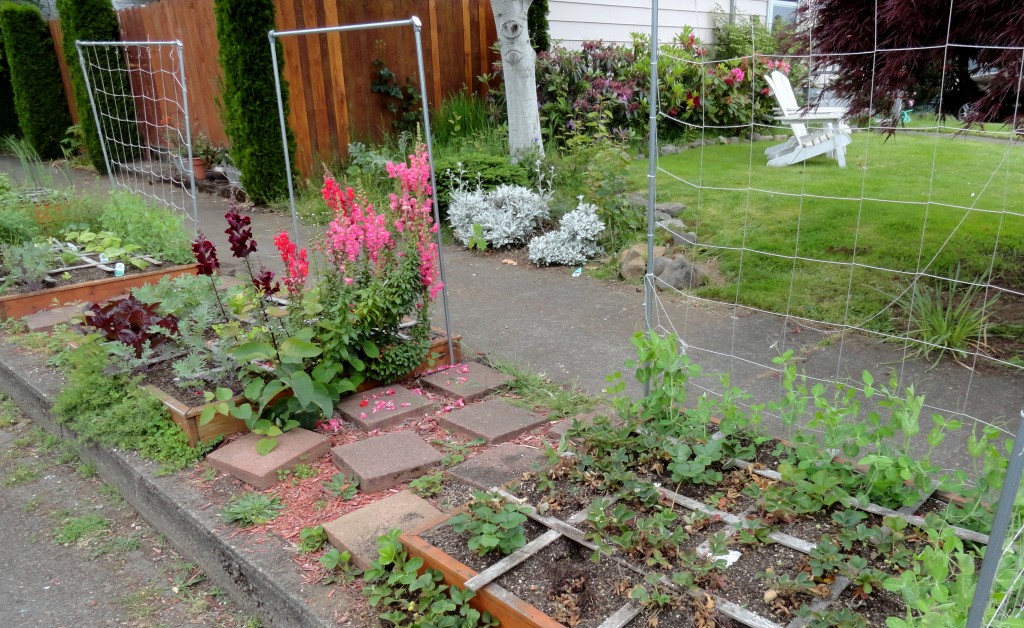 Salad fixings as pretty as they are tasty…

This trio of planter boxes is new this spring. I spy raspberries just beyond the open gate. 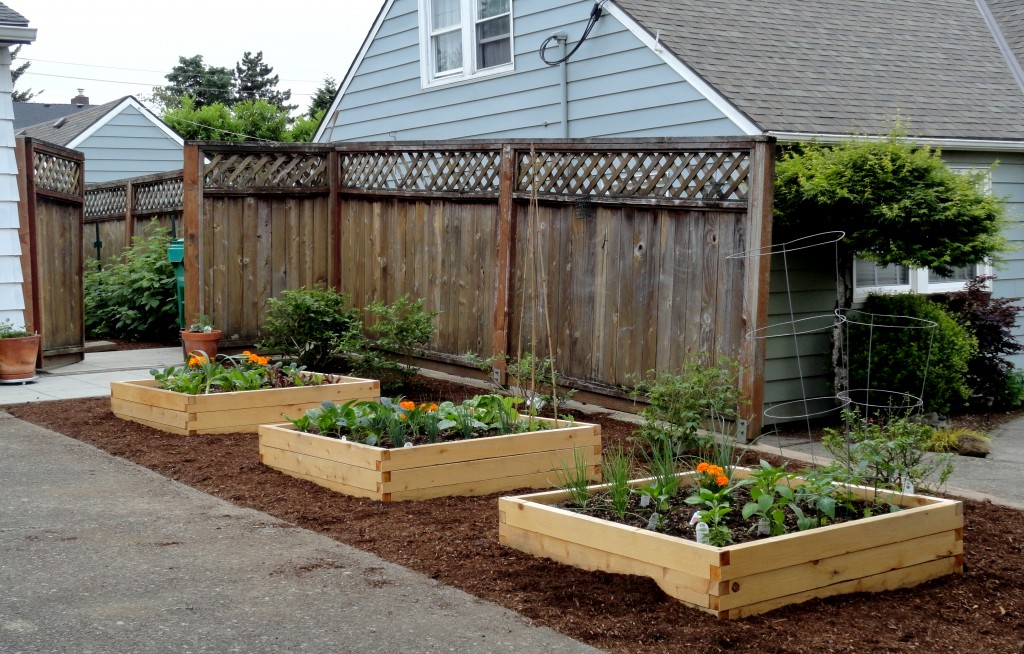 I wonder if these boxes were built from a kit? I like the notched corner detail, and the marigolds add a colorful touch. Were they planted to attract pollinators or ward of slugs? (I’ve heard the latter doesn’t work so well…) 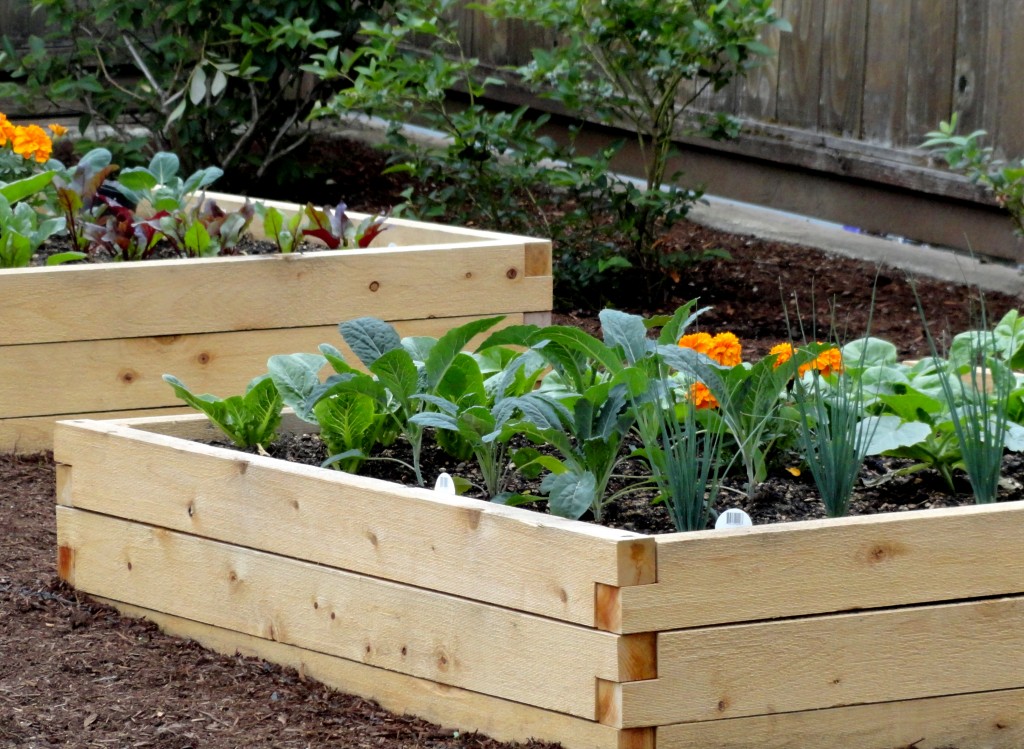 This huge planting has me thinking there will surely be more than the gardener alone could possibly use. Will she donate the extra to the local food bank? There’s a program here in Portland (and possibly where you live too), a partnership of sorts between the Food Bank and the Garden Writer’s Association, it’s called Plant a Row. 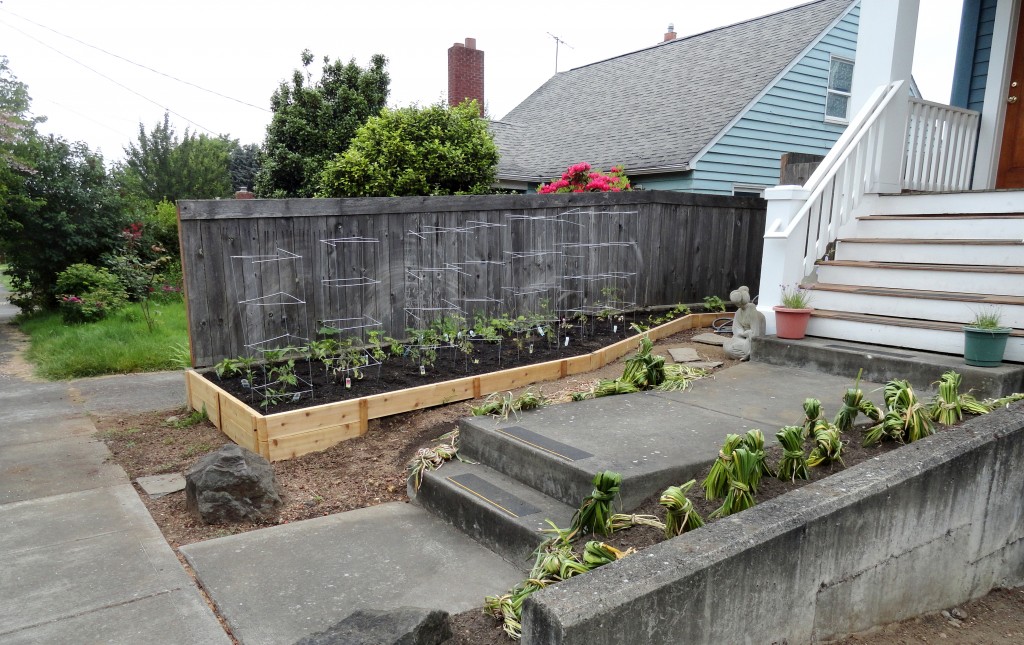 So many tomatoes and peppers! 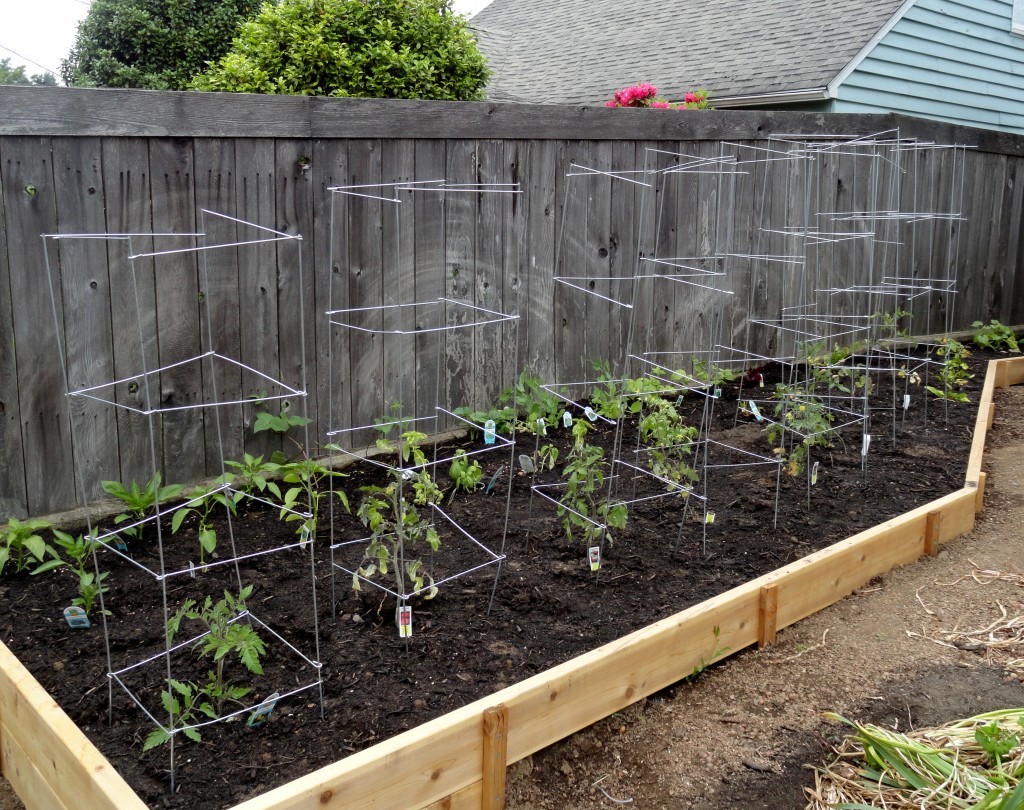 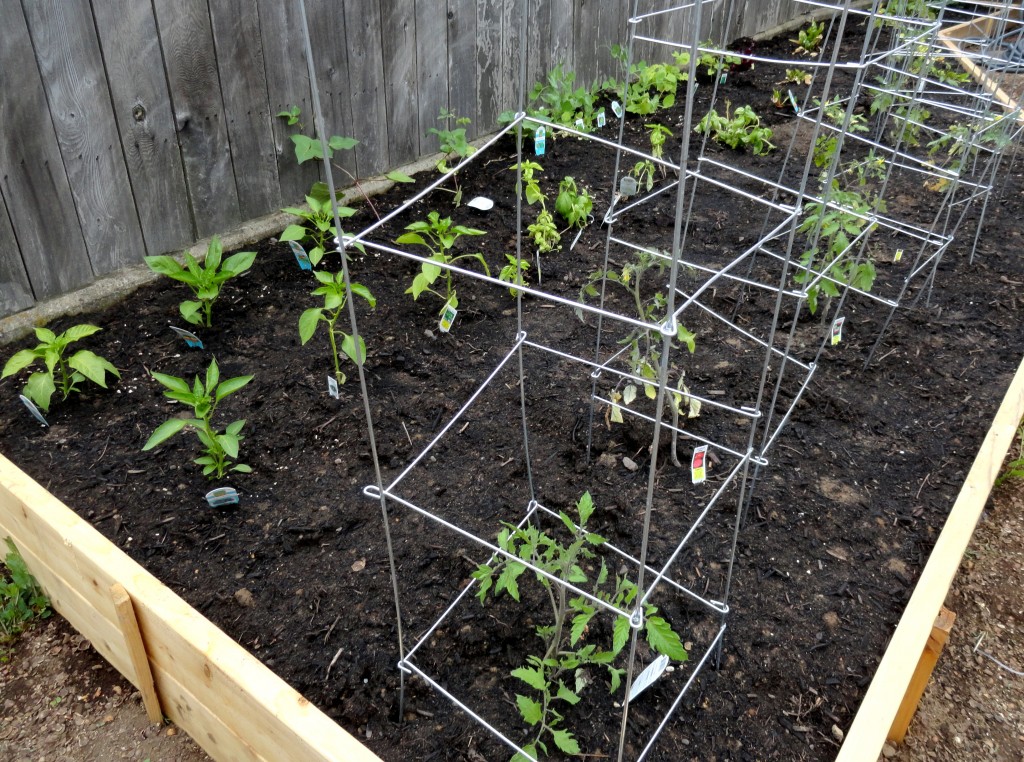 I love these corrugated planter boxes, aren’t they fabulous? (yes, shiny metal gets me every time) 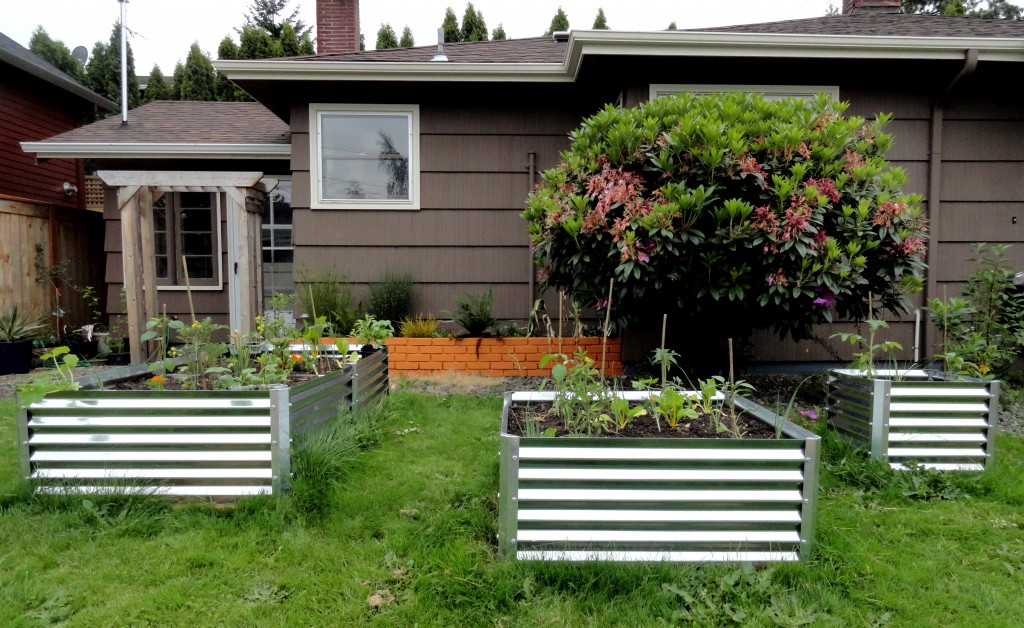 Abiding by my “stay on the sidewalk” rule I couldn’t get close enough to see exactly what they’re growing, looks like a nice mix though. 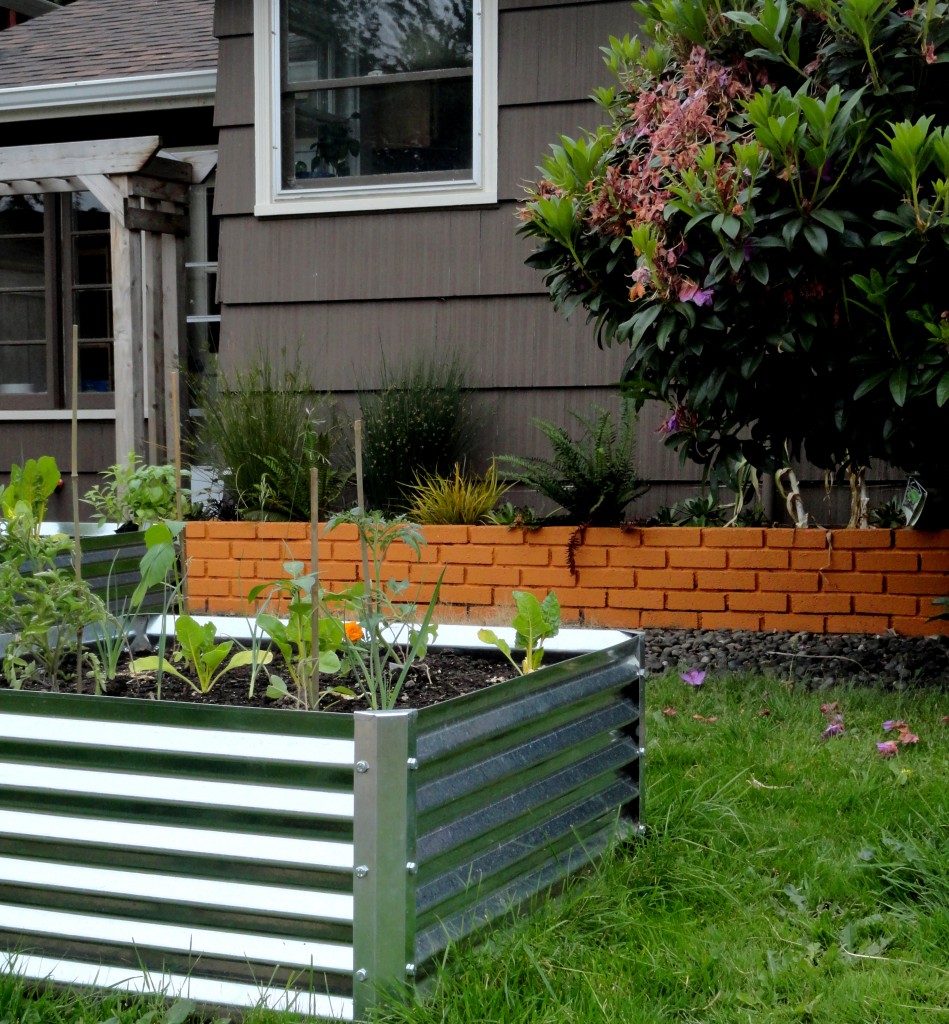 Stylistically this one is my hands down favorite of the lot. Of course the black paint job and huge Musa basjoo don’t hurt! 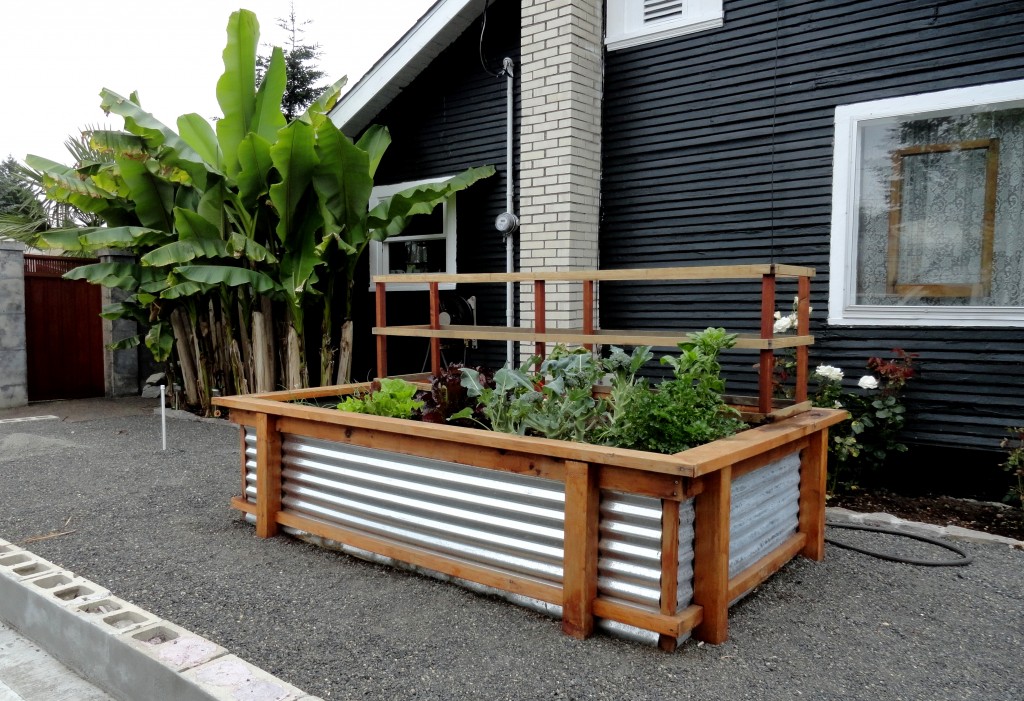 The built in tomato cages (I think that’s what they are?) at the back add a nice touch. 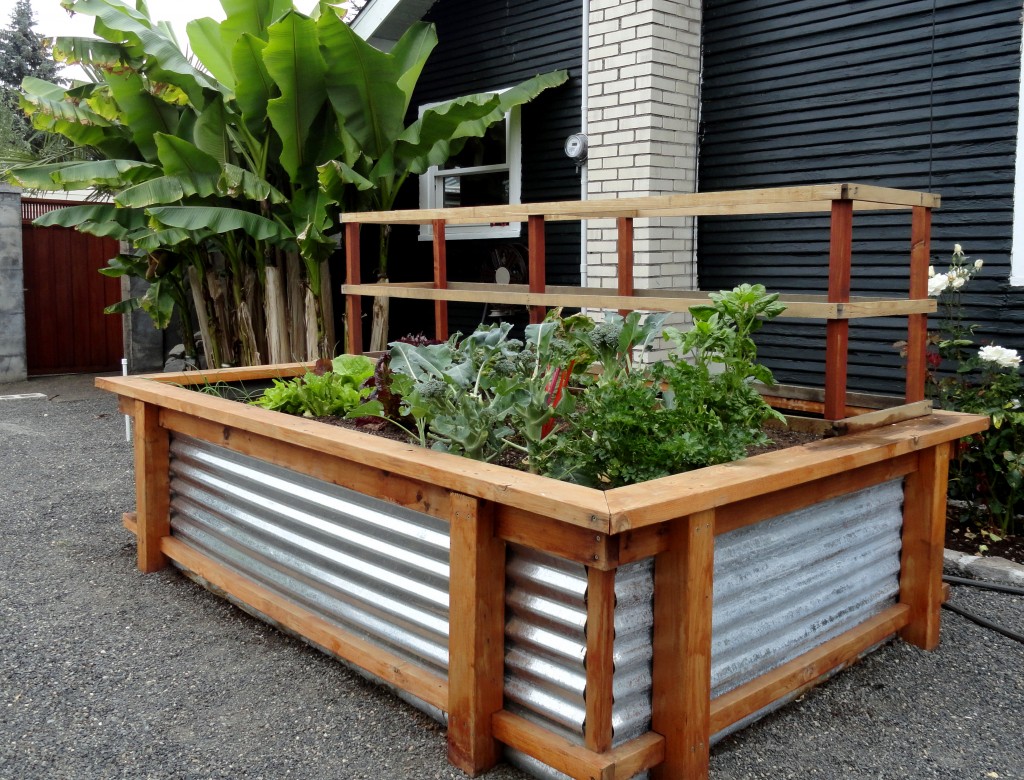 In another garden I admired their pea cage. I’ve always just used tomato cages, since their seasons don’t really over lap much. This one could easily be fashioned from wire fencing bought at the hardware store. 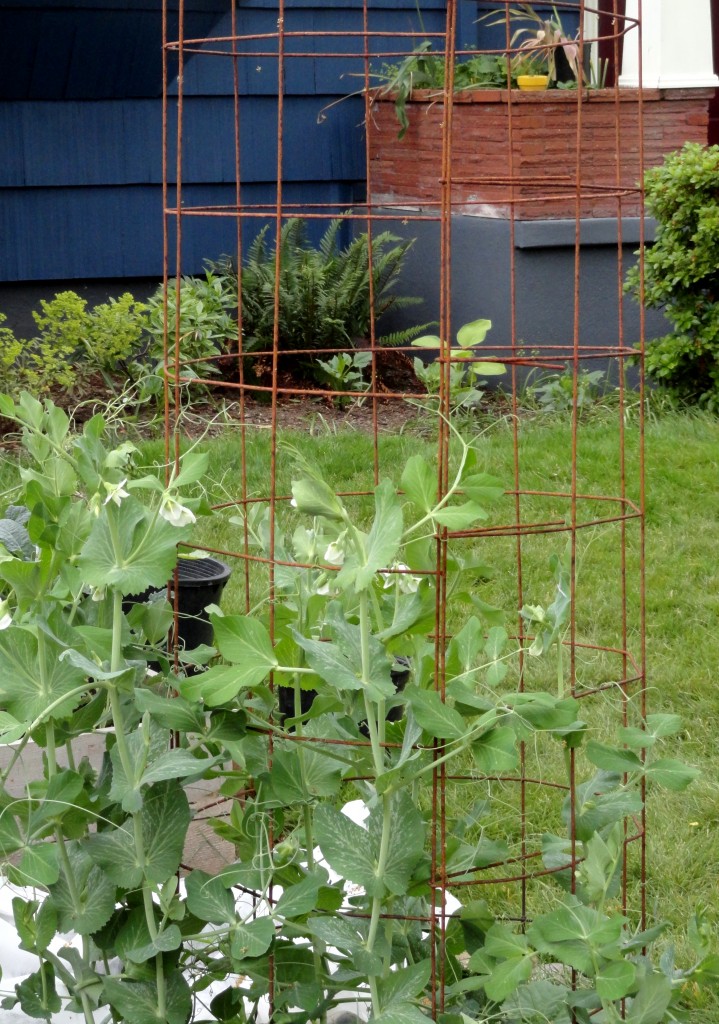 These planters were recently built along the side of a condominium building. For many years I watched the residents growing amazing crops in huge pots in their courtyard. I’m excited for them to see what these dedicated planters can produce. 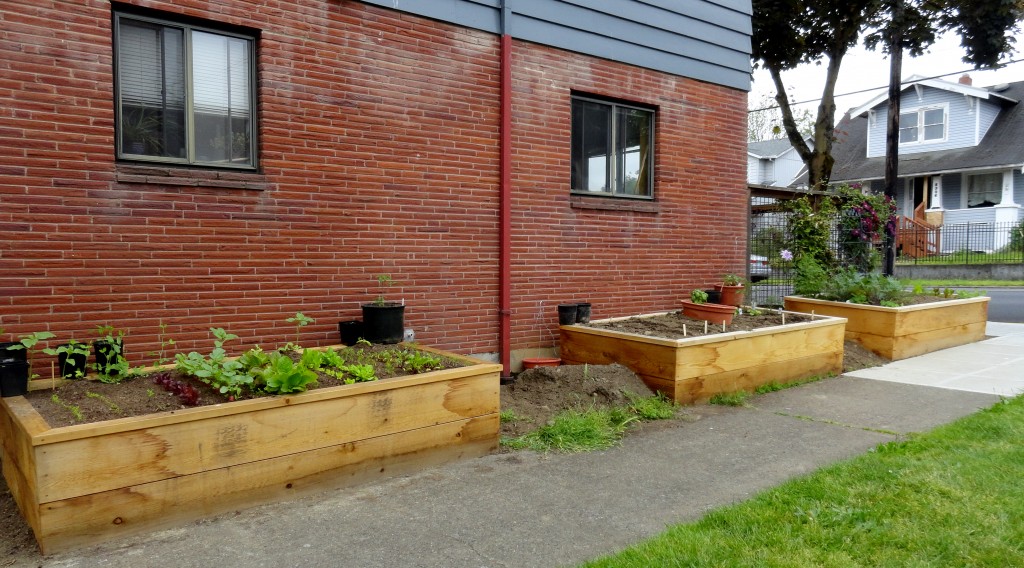 There is already an abundance of goods… 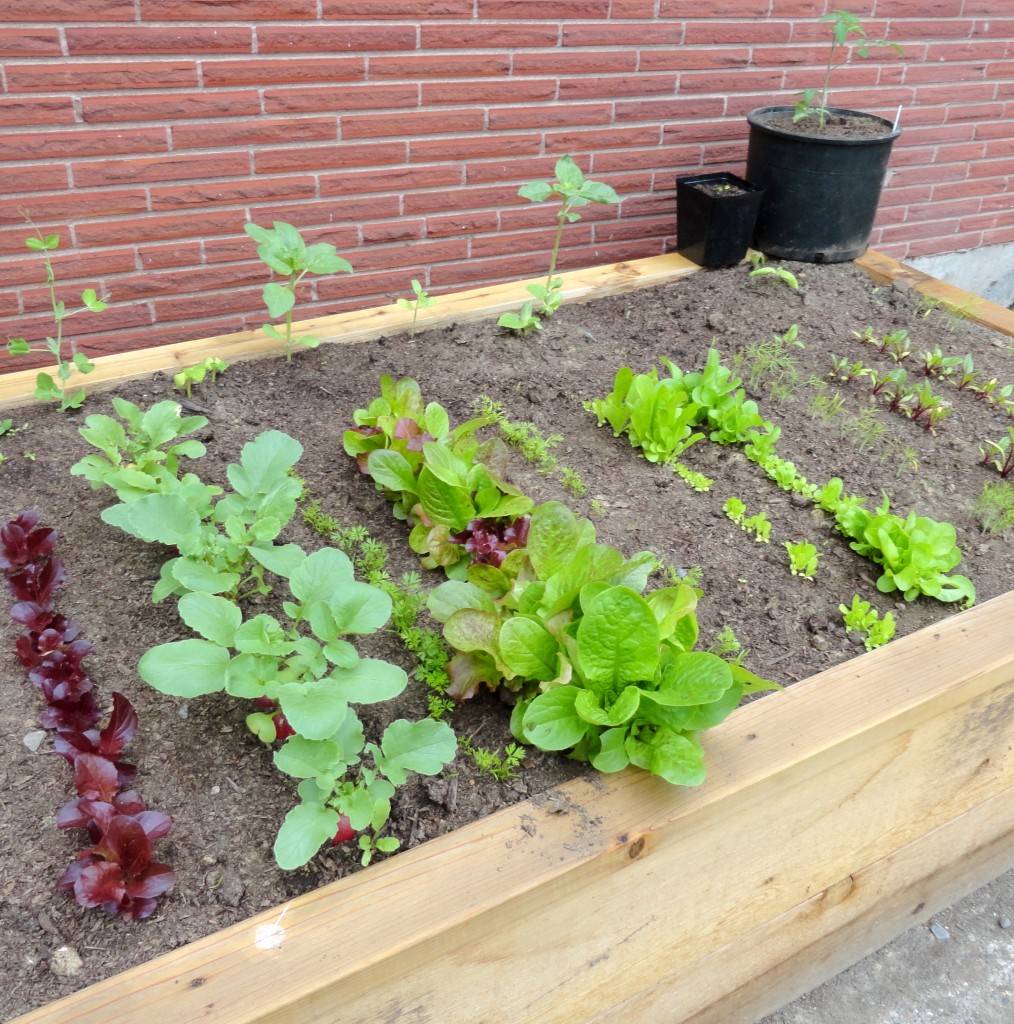 These radishes called out to be plucked from the soil and enjoyed! That’s something I admire about those growing their food in public spaces. Somebody could come along and wipe it all out, but they do it anyway. Gardening in the public eye starts a conversation, often times between strangers. Sometimes just in the head of a passer-by. 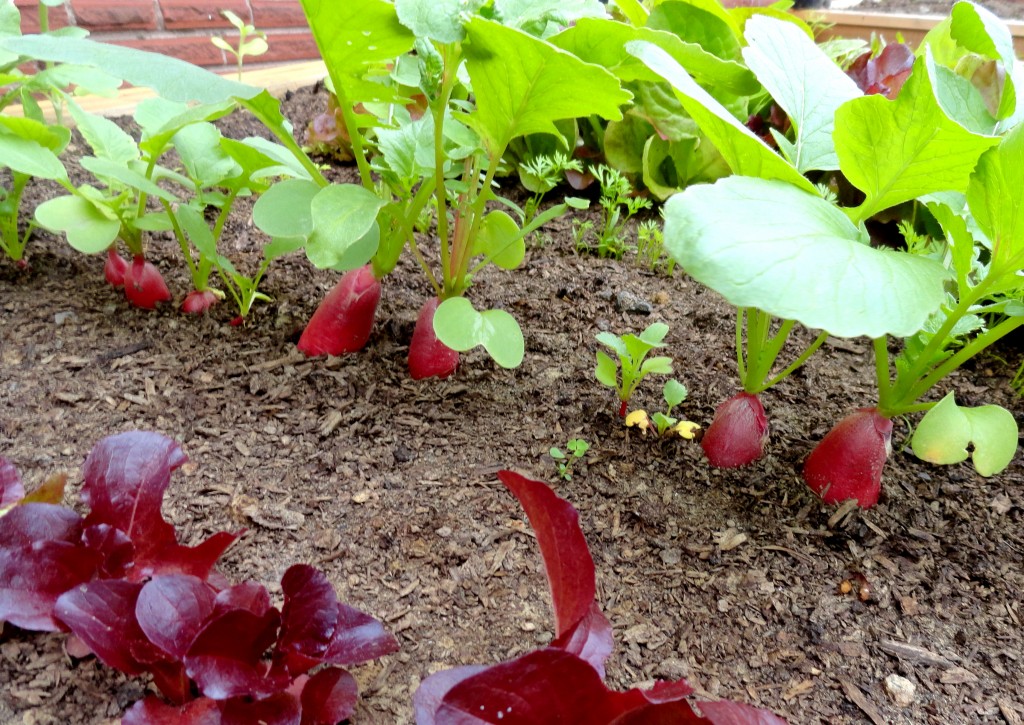 And of course once someone starts tending to an edible garden chances are they just may slide into ornamentals gardening as well. At least I hope so. 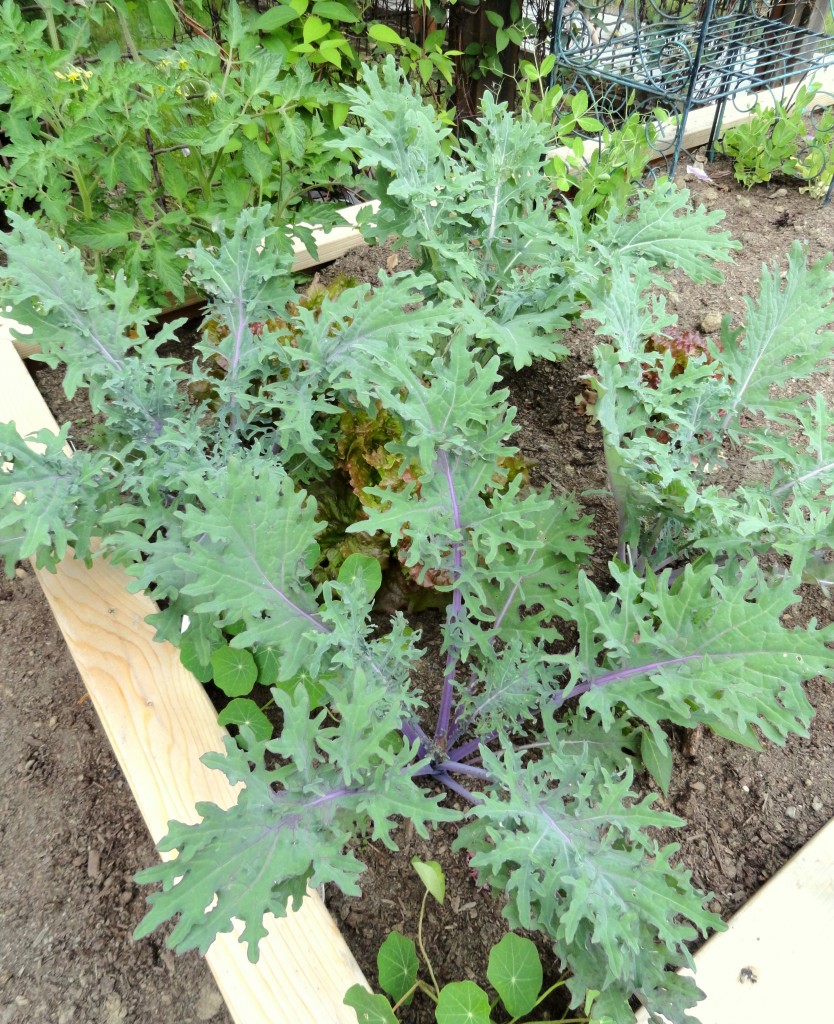 Finally, this two-step planter was squeezed into the edge of an already exuberant garden. The existing plantings are the work of prior residents. The new owners are maintaining them, but I wonder if they don’t think of removing them all in favor of more food? 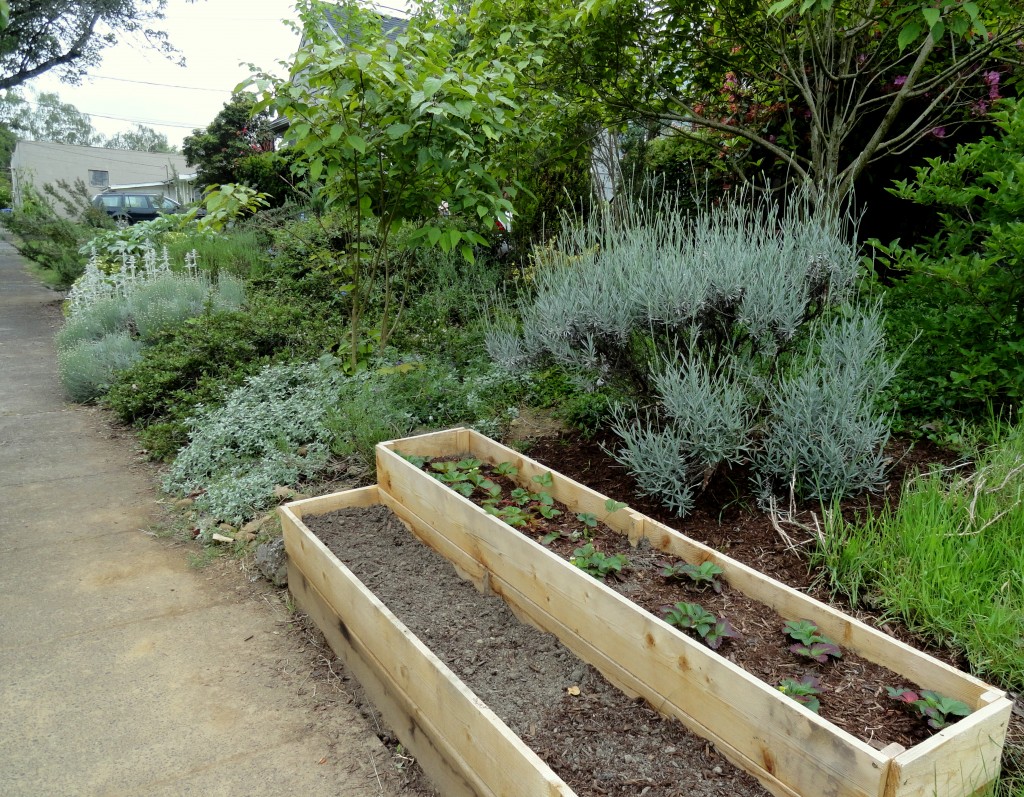 Whatever makes them happy. All gardening is good, whether it feeds the soul or the stomach. 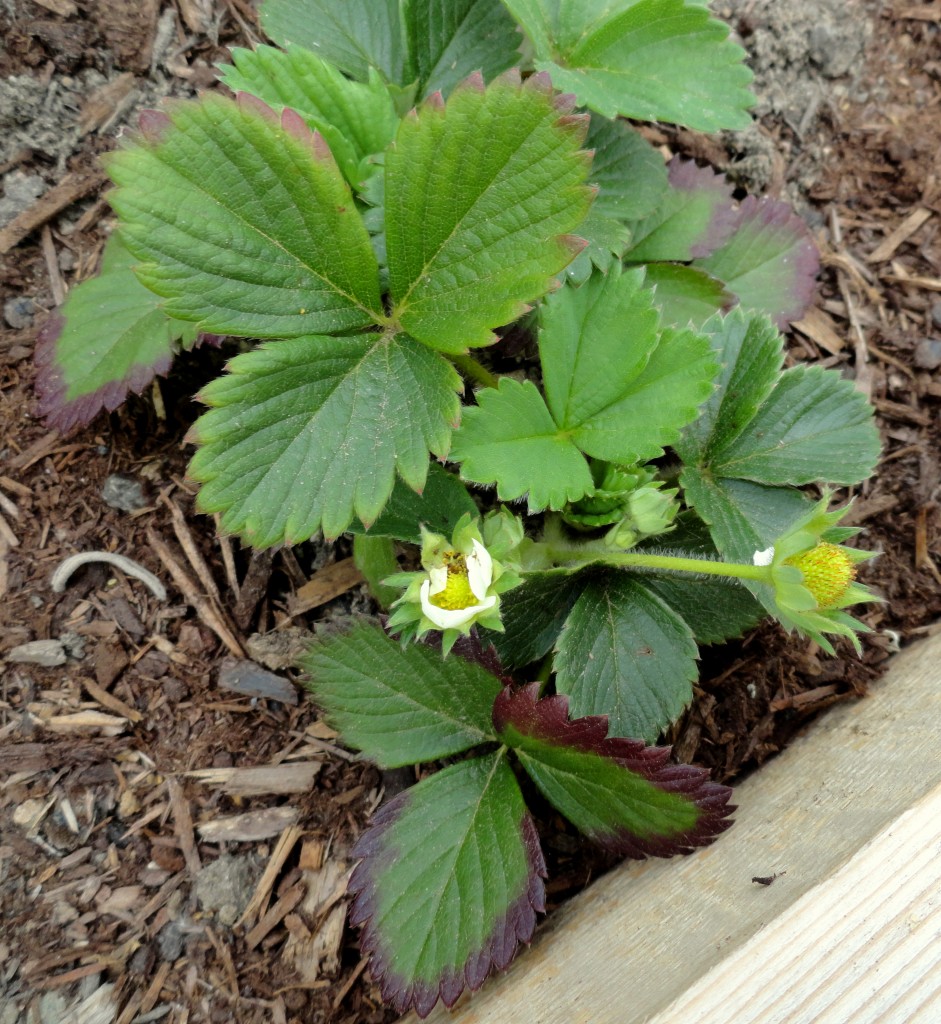 Oh and I would be remiss not to include a nod to Ivette Soler and her book The Edible Front Yard. She looks at growing edibles as a beautiful edition to your garden. They don’t have to stand alone, they can be integrated into your overall garden design. It’s a book worth checking out. 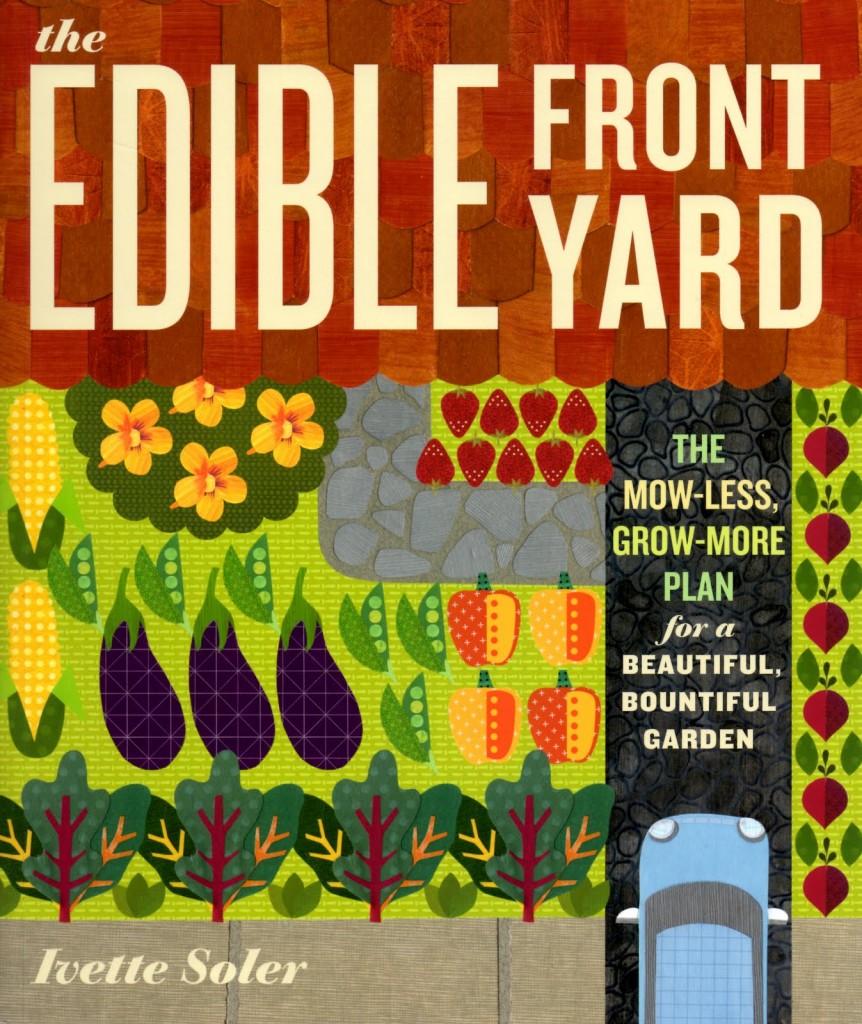 Finally, some of what I’m planting in my drive-way veggie garden: