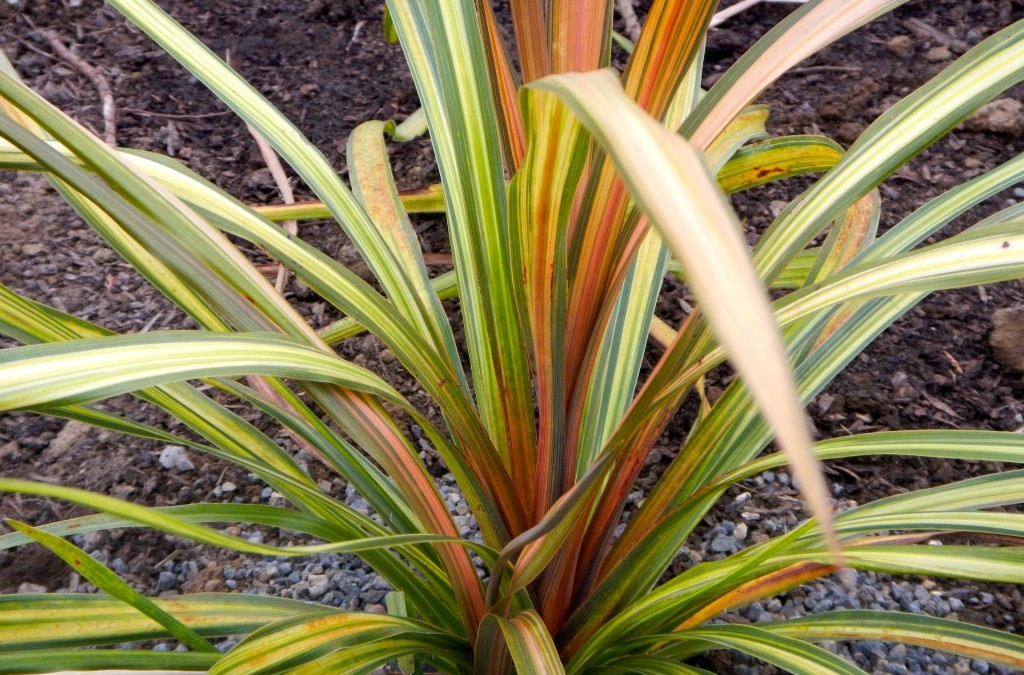 My brain likes puzzles, and the longer I live in my own flip flops, the more I appreciate this as a bona fide creative strategy. Puzzle working is in my bones. My parents claimed I could work a wooden US puzzle when I was just three–and lickety split.

Now it’s my approach to everything, and especially fun in the gardening. Often it can be serendipitous, but that doesn’t mean there’s not a puzzle to be worked. Danger Garden recently gave me a sweet little Olive Tree. Does that mean I can call my style Plant-Driven? That sounds a little better than ADD, which is what I usually own up to.

I moved it around in the pot trying to decided where to put it, and finally settled on an area I hadn’t given much thought. It’s a strip of yard beside the driveway, opposite the Sea of Juniper. This area has its own smaller Body of Juniper, but there was plenty of room to plant the tree, and it’s a perfect location. (That Juniper should be quivering in its roots.) And now, I have a start for a Mediterranean Garden. I’m so excited to have a new area to contemplate.

Tell me I have kindred spirits out there, please.

When we first move to Flamingo Park, I entertained the idea of working with a designer before I did anything. And I still hope to one day, bank balance permitting. Here in the Pacific Northwest, we have inspiring gardeners aplenty, fabulous nurseries, and  a plethora of accomplished designers. Designers know things, lots of things, Vanessa Gardner Nagel, Lauren Hall-Brehrens, Bob Hyland, and Darcy Daniels–to mention a few.

And I can always take a short ride to Heather’s house and check out her garden for inspiration. She said I could, anytime, I swear.

Meanwhile, back to storyline. The problem at the start of big tasks, like the new garden, is that I’m fairly certain I can’t pull it off. I have no evidence to support this notion, but doubt persists. And that isn’t even exactly right. I never actually admit I’m embarking on a particular project. I begin every endeavor by backing in via dabbling. I might paint a test color on the wall, which leads to several colors–and then I have to do something–even if that means painting the adjoining room instead. Because I have to work the puzzle of how the color flows from room to room. Or I might straighten the edge on a beautiful piece of fabric, and then decide to sew up a pillow, or maybe a dozen. Or I’ll dig a hole to see what the soil is like, and boom! off to the nursery with a lightbulb moment.

After we moved to our new house, my plant lust cohorts, Megan and Loree, would hear nothing of my claim that I didn’t know where to begin. With their encouragement and admonitions, I just started. And the crazy thing is, I’ve said this a million times to other people. Go outside. You’ll discover so much to do, you’ll have to give up eating and sleeping. I know for certain, my discoveries come in the process. Ideas follow action. And while thinking and strategizing is fine and necessary, on the whole, brick and baseball bats are better with Nazis. But I digress.

Years ago, I worked with a smart mathy woman who had a linear nose-to-grindstone style. I admired her, and then one day she said something devastating: “You’re not very disciplined, are you?”

I’m still shocked when people say mean things, out of the blue: unkind, untrue, un-called for. And while I suspect I drive people completely crazy who are discipline-driven, I know now that her OCD just ran a different direction than mine. Besides, those of us with wily poetic brains know: I’m good enough. I’m smart enough. And doggone it, people like me.

On the flip side, I do admit to getting a tad bored once I know how to solve the problem. And that’s one of the many reasons my partner is so good. When I reach the wandering-off stage, Bill is great at coming outside, gently redirecting me, and seeing the project through, especially when there’s heavy lifting involved.

Bill is likewise good at encouraging our Happy Hour break. But then, of course, he has to twist my arm.

So about my style. I hadn’t thought too much about the hellstrip in front, because that too seemed too daunting. And then my cute 86 year-old neighbor, Rosa, drove by and rolled down her window. “I see your grass is putting up seeds for next year.” Holy smokes, she’s out working in her yard almost every day, and I thought I’d better do something about it, PDQ. And then I started noodling, seeing if I could pull the grass out of the sedums, which was insane. Eventually I started pulling the sedums out of the grass. And then some went right to recycling bin.

Upshot, under all the grass and sedum, I found pavers, in fact two sets of four. Not bad, no? I had one bag of crushed rock on hand, so cleared enough around one just to see how it would look.

But close up tells another story.

And then Bill came out. It goes so much faster when he’s not try to save every scrap of sedum that will grow back impossibly dense anyway.

I do have more 50# bags of crushed rock in stock now. And I could get the handtruck and finish it myself. The thing is, I’m good with knowing a solution is in the offing.