Your garden, in words… 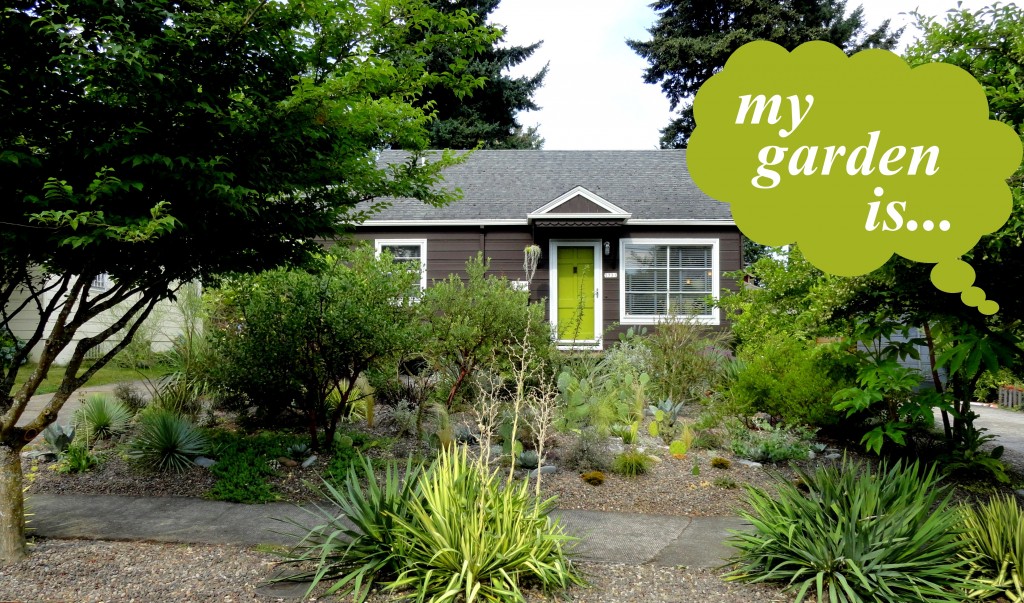 I’m curious, have you ever been tasked with writing a description of your garden? On the surface it sounds simple, but then emotion gets in the way. All those things you see (they’re out there in the future, you can see them clearly), that others might not. You need to somehow put those into words. Plus there are probably things you want to explain, why you made the decisions you did. How a little sentimentality kept you from removing that ___ (fill in the blank with: clematis, rose, hydrangea etc…) which doesn’t really fit the garden plan.

No doubt there are a few polished folks who have various types of descriptions at the ready, but I’m not one of them. The first time I had to write a description of my garden was last summer, for the 2014 Garden Blogger’s Fling. I suffer from wordiness. My description was only about 10 times what we needed for the cut sheets, I pared down and pared down. There were things I thought were important! Then came the part where we had to identify “Favorite or Noteworthy Plants”…but that’s like saying which kid is your favorite, well, if I had kids…

This latest exercise is because I said yes to the request to be part of the 2015 Green on Green Garden tour to benefit Albertina Kerr. It takes place this August, and to be honest it’s already on my mind. I’ll need to keep things hydrated, the Garden Bloggers were here in early July and that was a challenge. This group will be a month later!

I’d love to hear how you’d describe your garden, please play along! Give it some thought and write a description in the comments, I don’t care how long it is, no editing will occur! I’ll show you mine first. And trust me it could have been 10 times longer…

I am a proud practitioner of the “crammit” style of gardening, bare ground = room for another plant. This is a collector’s garden with little attention paid to what style-purists might think, although the hardscape helps to control the chaos.

Not much remains of the garden we inherited, which was primarily lawn (front and back) with narrow planting beds on the 45’ wide by 111’ deep lot. The front garden you see today dates to 2011 when I was forced to start over after losing the structural plantings (phormium and cordylines) in back to back horrible winters. This part of the garden is designed to require minimal water and maintenance. Feature plants include Arctostaphylos (manzanita), Yucca rostrata, Tetrapanax papyrifer and several different agaves.

Work in the back garden began summer of 2007 with removal of lawn and construction of the retaining wall and patio. The shade pavilion (which doubles as a sort of greenhouse in the winter) was added in 2009. In early 2014, several over-grown shrubs (small trees) on the north side of the property were removed and a new fence built – changing the entire feeling of the space – new plants are starting to fill in. Feature plants include Magnolia macrophylla, Eriobotrya japonica (loquat), several Schefflera and dozens (and dozens) of containerized succulents and unusual specimens.