saga of the apple tree 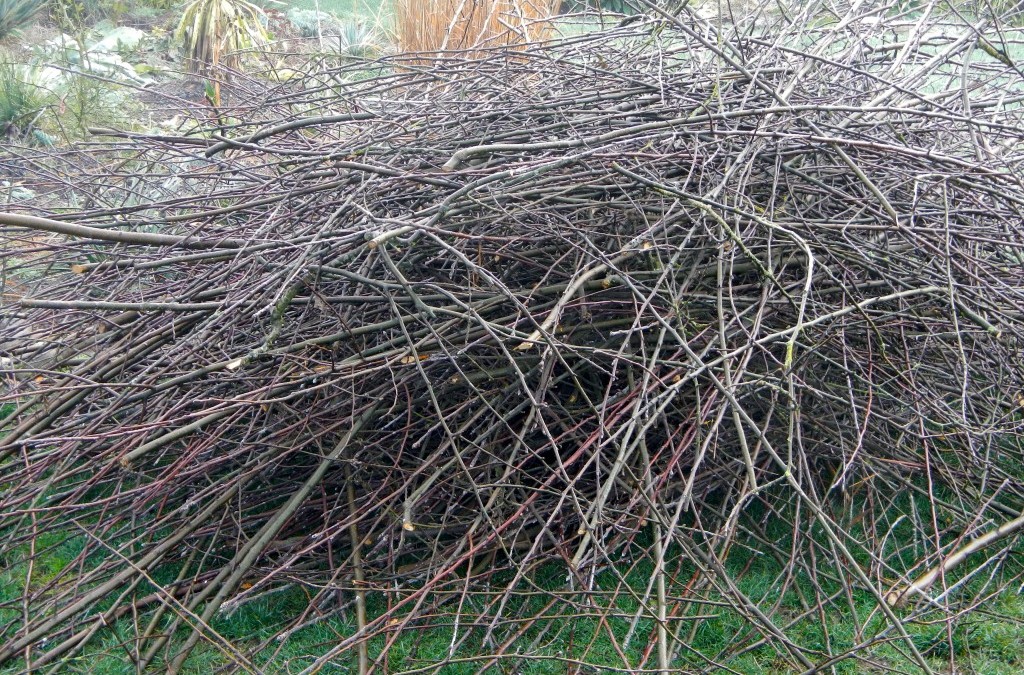 Funny how once a decision has been made, it becomes so obvious. I’ve been struggling with the what-to-do-with-the-apple-tree question since we moved to Flamingo Park nine months ago.

I wouldn’t have chosen this tree or sited it center view from the picture window, but the trunk is magnificent. I don’t know the variety—though one outfit thought Gravenstein. It was never a question of the tree itself so much, as it relationship to the rest of the garden.

I can’t tell you how many times I went back and forth: Should I keep it, which means committing to constant work around–or should I take it out. Yes. No. Yes, wait a minute, no. I asked all my gardening pals, who were kind and patient–but wonder if they were thinking, decide already.

I made so many bargains along the way. I’ll trim the water sprouts and then if I still don’t like it, it’ll come out. Time passed, and I had a decent stretch of gardening season, but still no certainty. It was always the trunk that stopped me. Then, I came with the brilliant idea, if the apples are good, that’ll be the sign we should keep it.

I’d been told it wouldn’t produce many apples because the pruning hadn’t been maintained. Since I loved the trunk, I thought, well, I could live with it, especially if it didn’t over produce and encourage yellow jackets. Hah. That tree shed wormy apples by the bushel for weeks. I dutifully gathered and recycled daily, and didn’t get stung–which is a good thing. The previous two years I had been stung by the aggressive, no good terrible bad bugs, and my reaction was dramatic.

To recap, the apples were terrible, and there were tons of them, and the tree dominated the garden view.

About a week ago, for the umpteenth time, I decided to start with the orchard pruning, and only resort to removal if I really didn’t like it. I was certain that I didn’t want another season of the shadow cast on my “hot garden.” I argued back and forth for pruning versus removal a zillion times–always with the good-natured man’s agreement. Whatever I wanted to do was fine.

We got a couple bids right after we moved in. The first was around $1200 to remove the tree. The second was for $850. But I wasn’t sure. So I waited–and solicited more opinions from my gardening pals; and checked into donating the wood to woodcarvers if we did take it out; and signed up with a group affiliated with Oregon Food Bank to pick and distribute the apples.

In June, we had a few diseased trees and pom-pom pruned Rhodies removed. At the time, I got a third bid for the apple tree. I’m all but certain the Tree Dude said $450 to take it out–which seemed like a decent deal–or $200 for the pruning. He said get back to him in the winter when it would be best to do the job.

Well, I put in several calls and texts before I finally heard back. So the Tree Dude came over, said he remembered our apple tree, but that I had the bid backward. It was $450 for the pruning and $200 for removal. I reluctantly agreed to $400 for pruning, feeling a little bamboozled, and crew was set to come that afternoon. Then Tree Dude called a bit later and said he’d already given the crew the day off, and so we relayed plans for the following Tuesday.

About this time, it was beginning to feel a little like that joke about the guy waiting for a rooftop rescue–who rejects the car, the boat, and the helicopter. He drowns and gets to heaven, asking God why he didn’t save him. God says, what are you talking about: I sent you three opportunities. Or maybe it’s more like the Fox, the Chicken, and the Grain joke. At any rate, it’s been a challenge to my thinking process.

So once the the job was delayed, I had time to think about it. I didn’t want to spend $400, especially if I’d have to turn around and pay for removal. So I groused about it to the men–there were so many red flags–and up to the tree they stepped. Those guys are so good.

And now, I LOVE MY TREE.

It looks fantastic. You can clearly make out the gorgeous trunk now that the thick water sprout are gone. The birdies are in heaven.  There’s so much more light. I can see the sky above it from inside the house.

A shoutout to Ms. Jane the Mulchmaid, who had it right from the beginning.

I’ve taken a ton of pictures this week, and been surprised by the challenge of capturing it’s glory. The above picture gives a good idea. Too bad about the birdseed bucket and barbecue in background.

The birds are loving the thicket of branches, so I’ll have to think about that.

And the kitties think it’s pretty swell, too.