Use the Whole Pumpkin 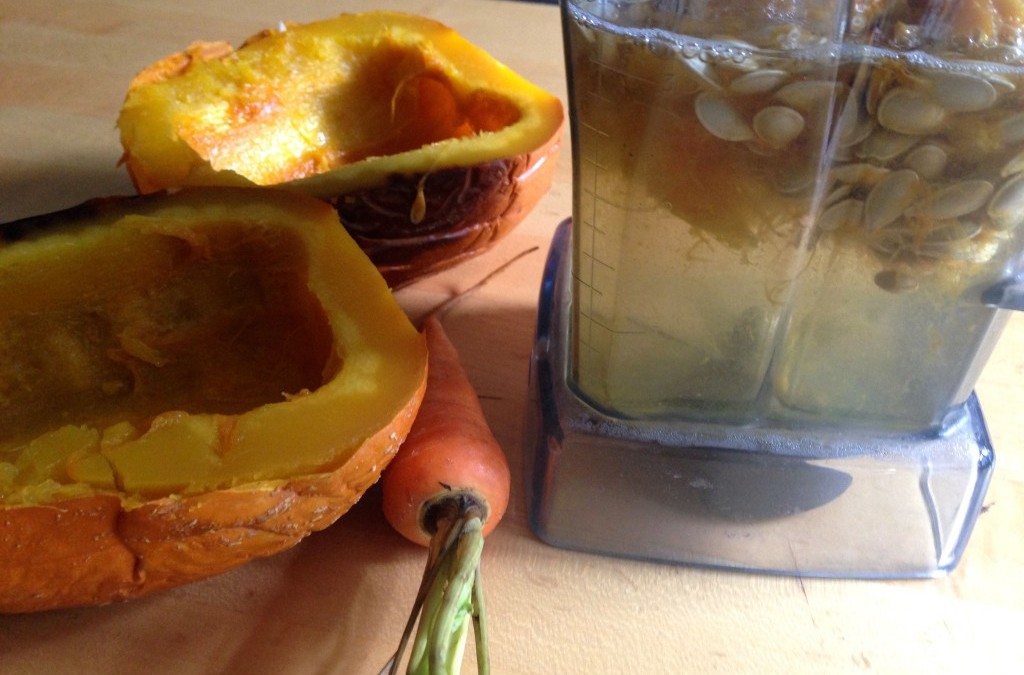 I love all of October, especially Halloween. It’s so much fun to see jack-o’-lanterns and their spooky friends turning up on porches. But me, I’m not a big fan of pumpkin carving. Especially step one, where you find yourself up to your elbows in seeds and stringy pumpkin guts, wondering if you’ll ever get it all so you can get on with the fun part.

And then you have the matter of the pumpkin seeds. Crazy good for you. You should absolutely eat them every chance you get. So delicious salted and roasted. And such a pain in the bum to clean and dry and prep for cooking.

In my fantasy life, I’d have time to spend an afternoon on a cooking project, and I’d pull those slippery seeds out of that mess and enjoy roasted seeds all squash season long. In real life, I usually put them in a bowl for “later” and then throw them away when they’re moldy. I hate throwing away good food! So I am pretty excited I found a way to use those pumpkin parts, without having to cure my case of kitchen laziness.

Bear with me here, I know eating pumpkin guts sounds a little weird and a lot hippie. So let me give you a sneak peak of where this is heading. Chocolate cupcakes in your future. 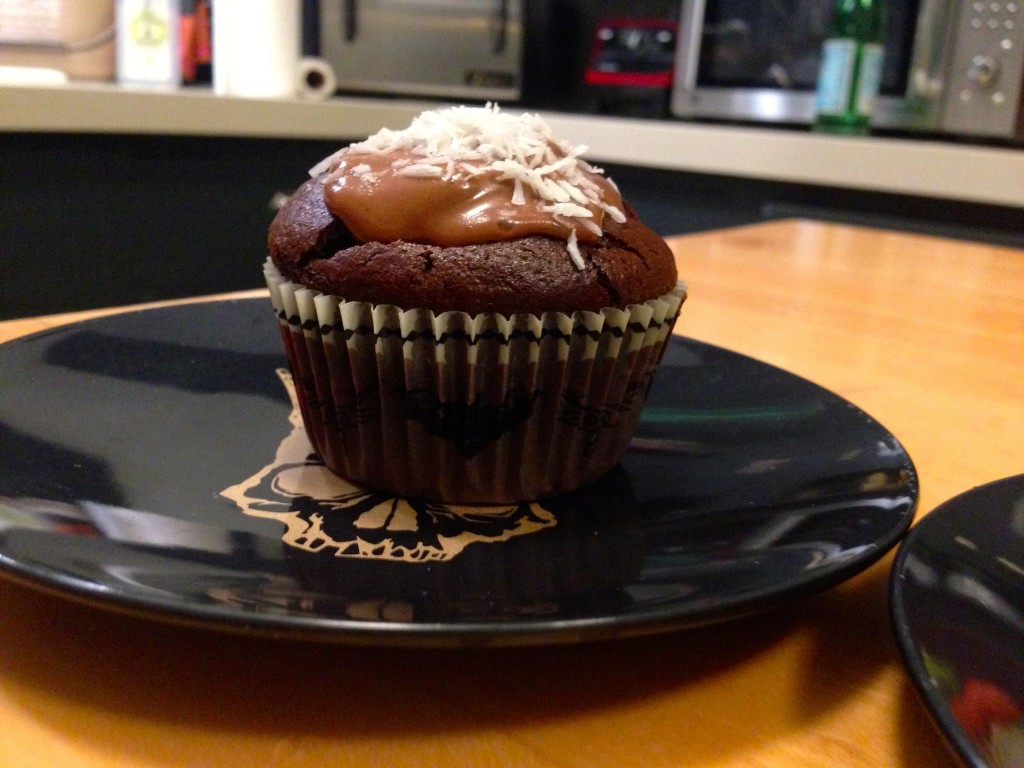 I have been making an effort to eat more that comes from the ground, less that comes from a container. A convenient container of store-bought coconut milk was one of those things I was having a hard time giving up. I finally pushed myself by letting the pantry run dry, so I had no choice but to find an alternative.

Happily, it’s super quick and easy and delicious to make different types of milk out of all kinds of nuts and seeds. I’m getting the hang of this, not that there’s a whole lot of skill or mystery. I started with coconut milk since that was already familiar. Boy am I silly for procrastinating. You just blend water and coconut and strain it.

Then I heard someone talk about making pumpkin milk, and I had a new mission. Here’s the recipe they shared.

Blend, strain and use. Sounds easy enough, once you get the pumpkin cleaned out. Since I don’t like the raw pumpkin wrangling, I poke a couple knife holes in the pumpkin, roast it whole, and deal with the innards when they’re easy to scoop. A smallish sugar pumpkin left me with about a cup of the insides, and I added 3 cups of water. 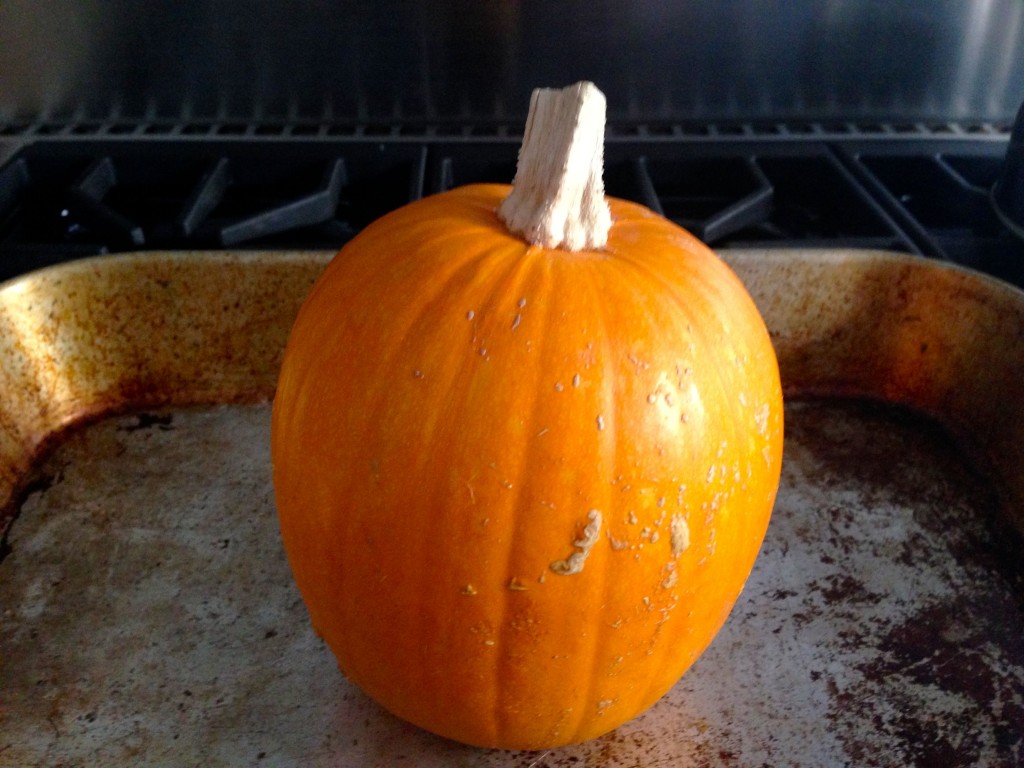 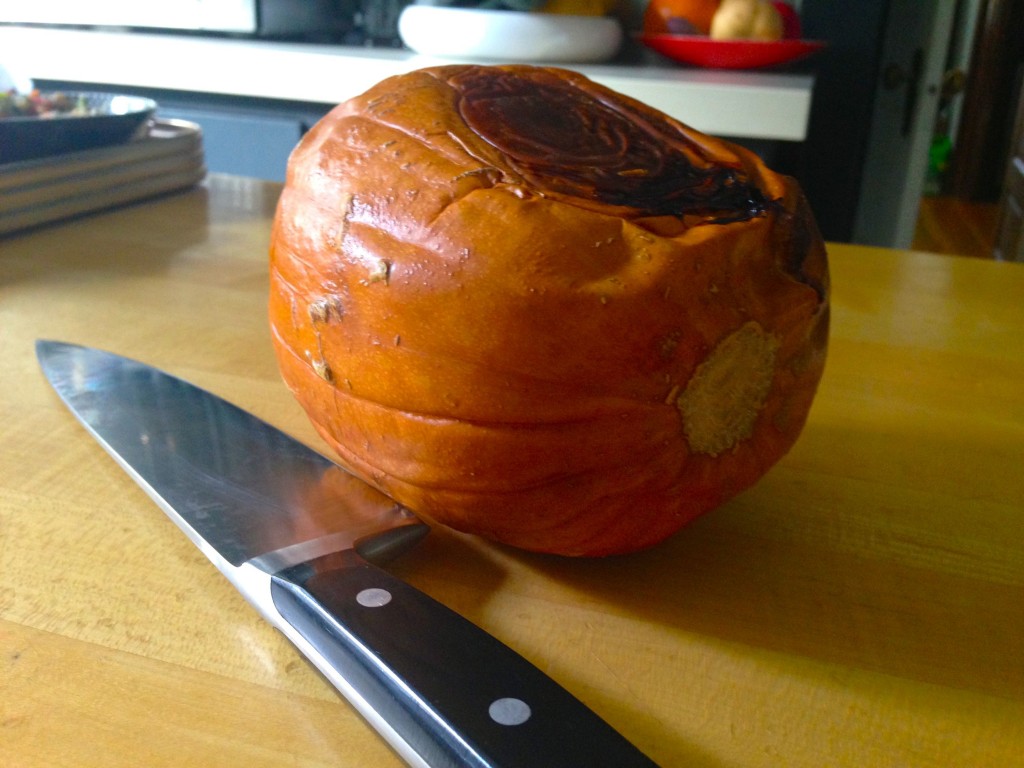 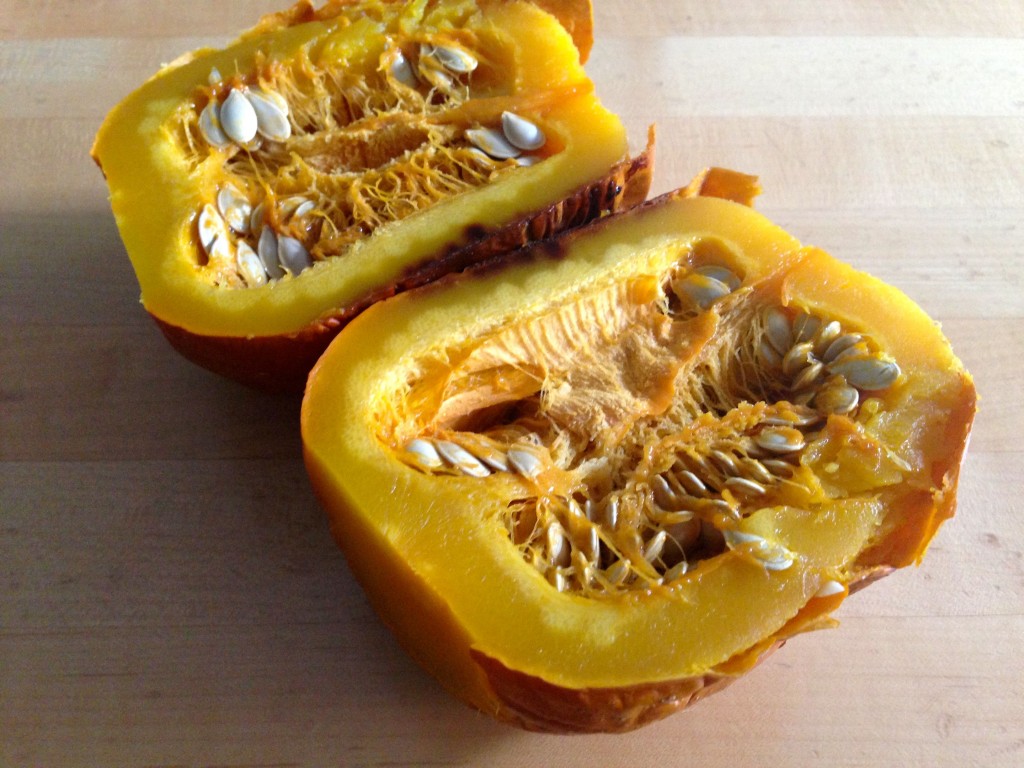 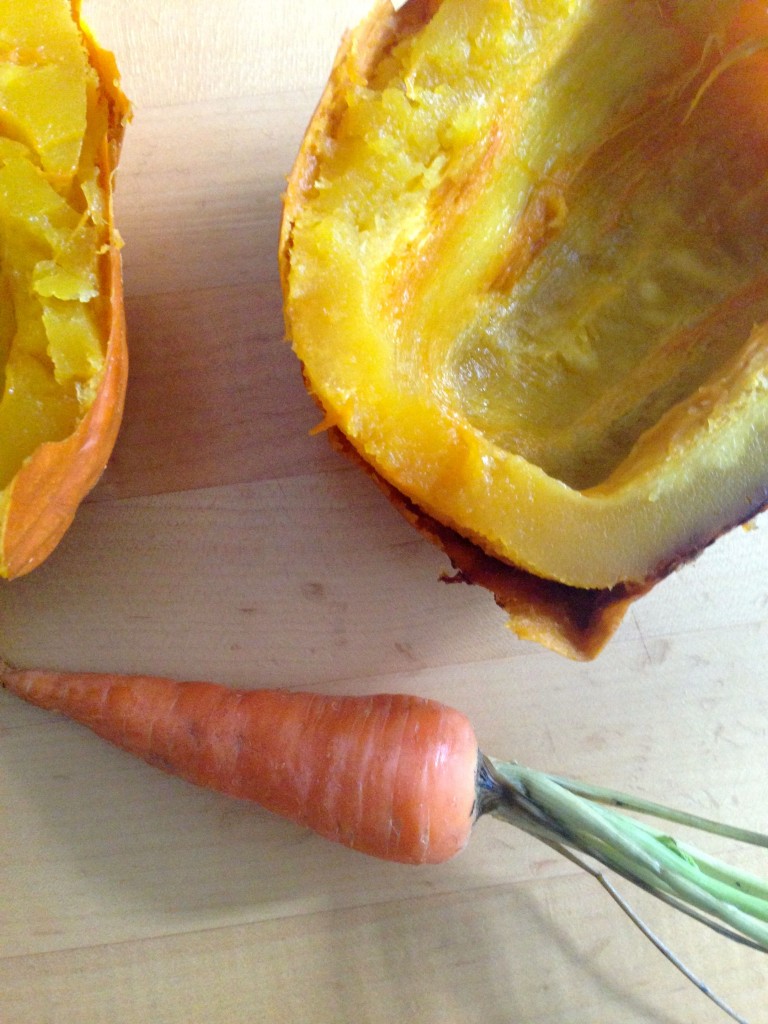 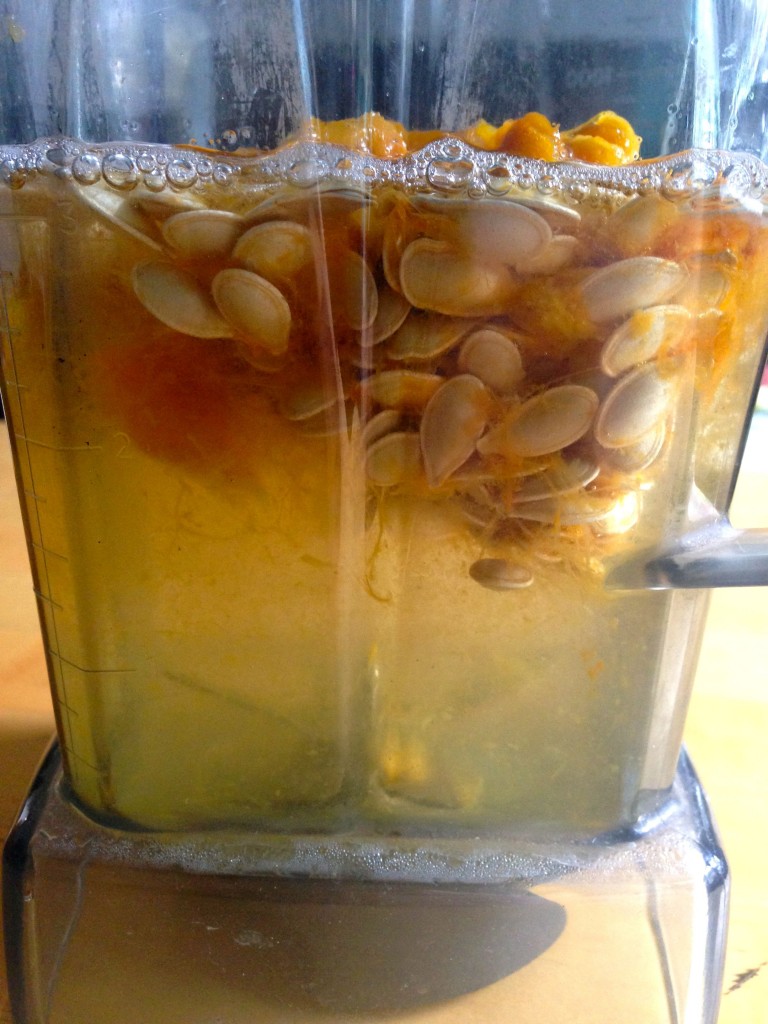 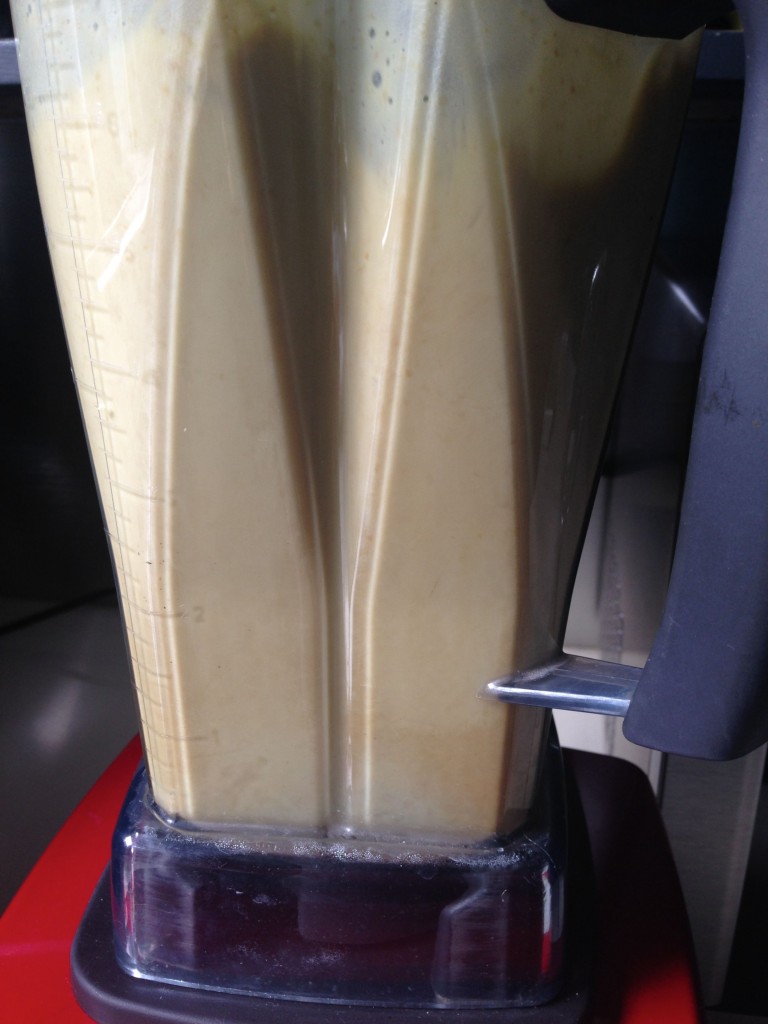 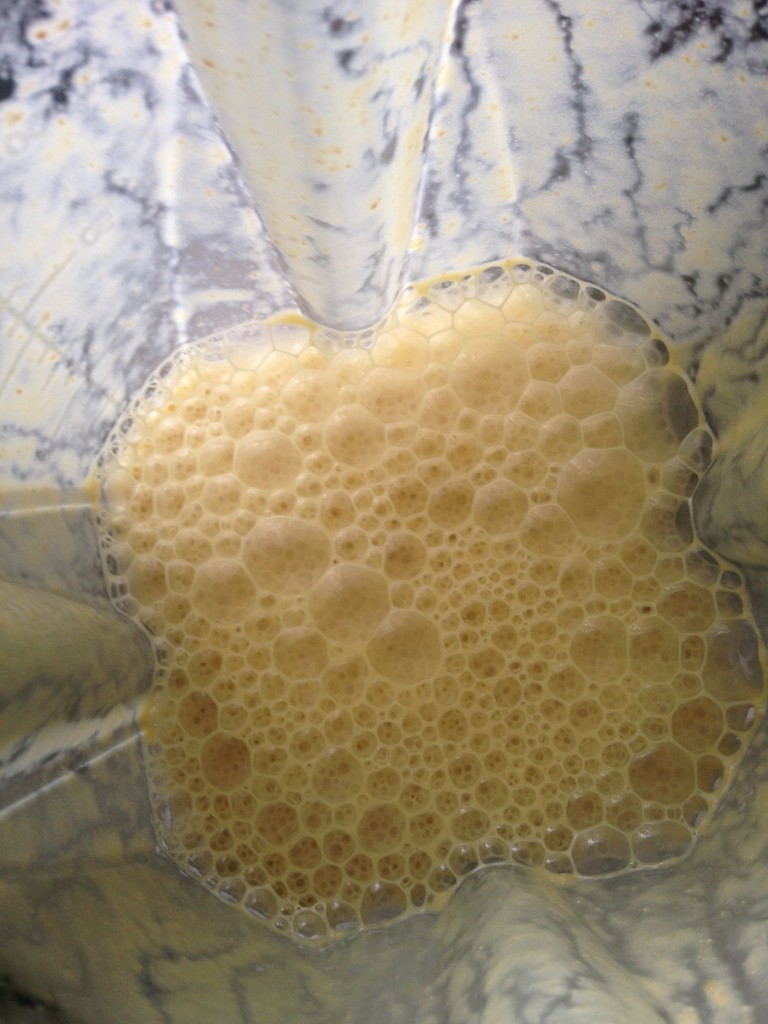 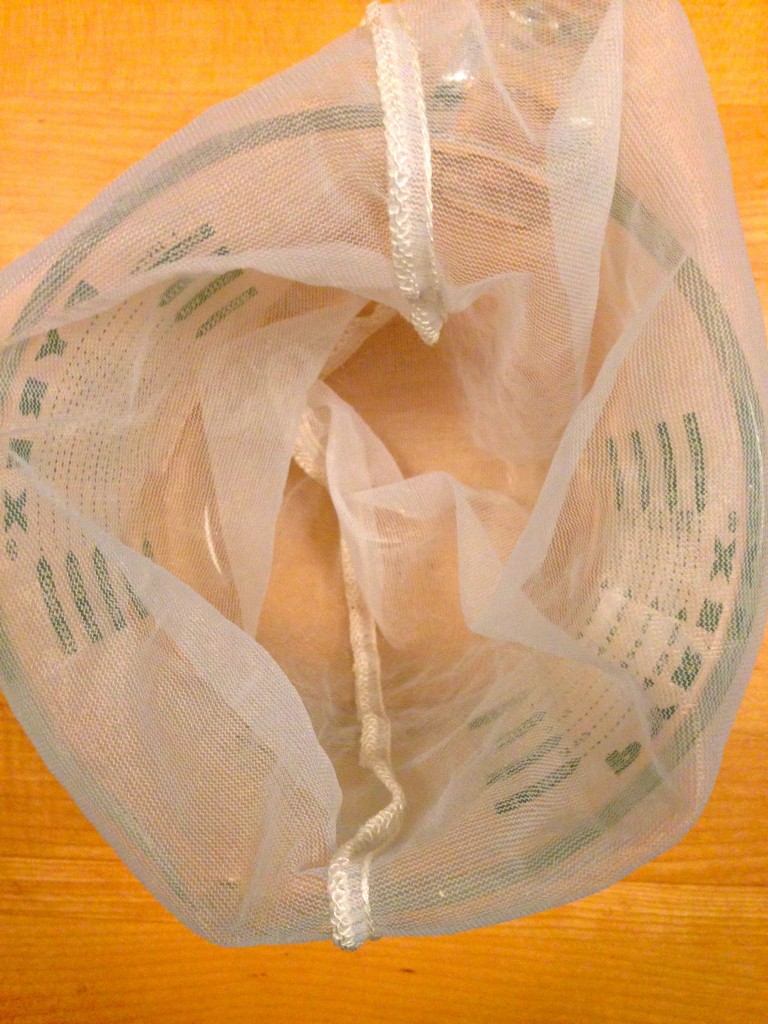 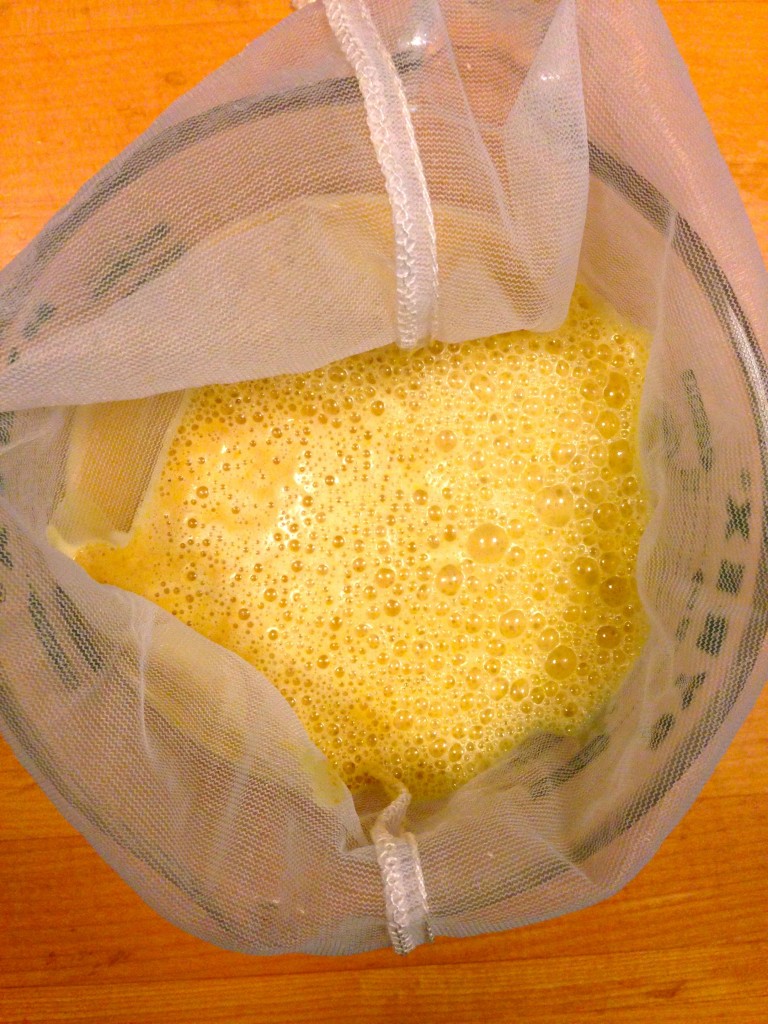 I used a nut milk bag to strain it, cheesecloth or muslin would probably work too. If you had told me a few years ago I would regularly use the phrase nut milk bag in a sentence, I would have called you crazy. But here we are. 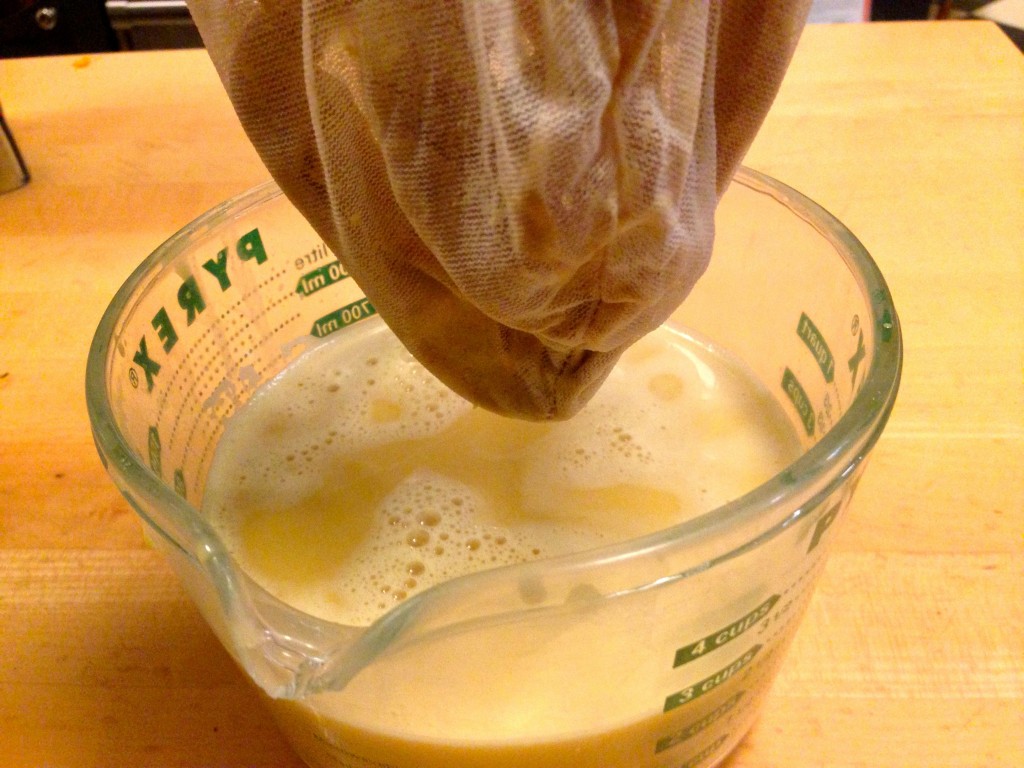 So it’s easy enough to make, but then what to do with it? I have to admit I was a little nervous about this particular food experiment. I don’t like the smell of a fresh raw pumpkin. I was worried it would taste like that. I wasn’t going for pumpkin flavor, I was more interested in figuring out how much I could use the milk like any other. Experiment #1: chocolate cupcakes with chocolate frosting, because it seems like it’d be hard to go too wrong with chocolate. 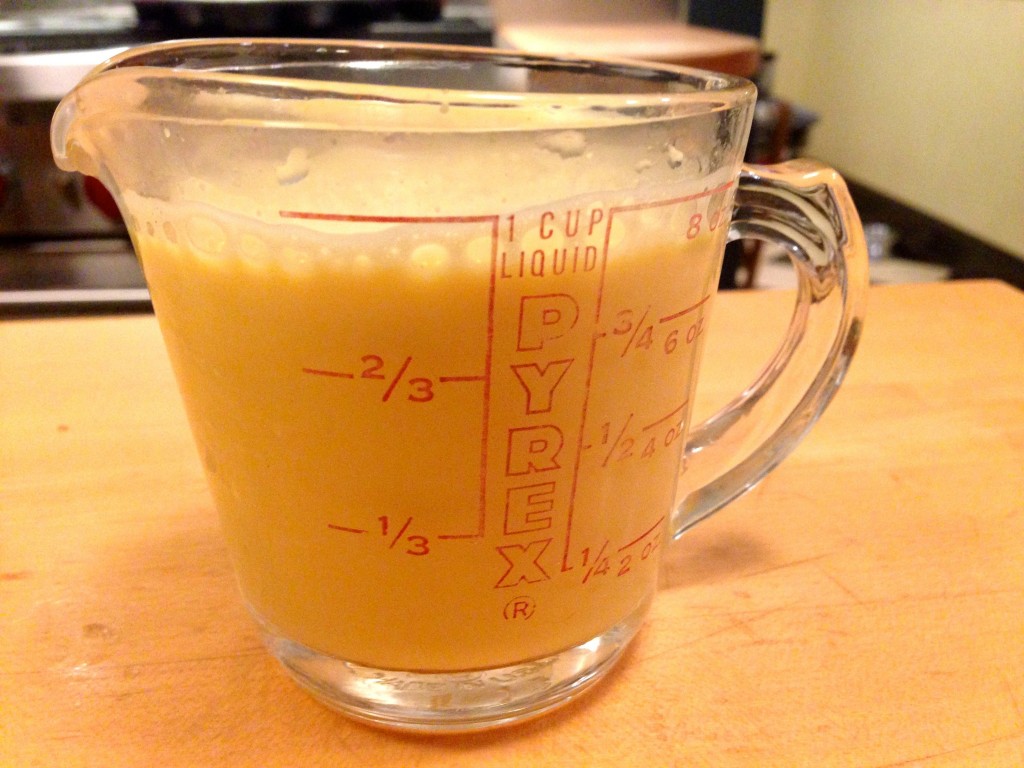 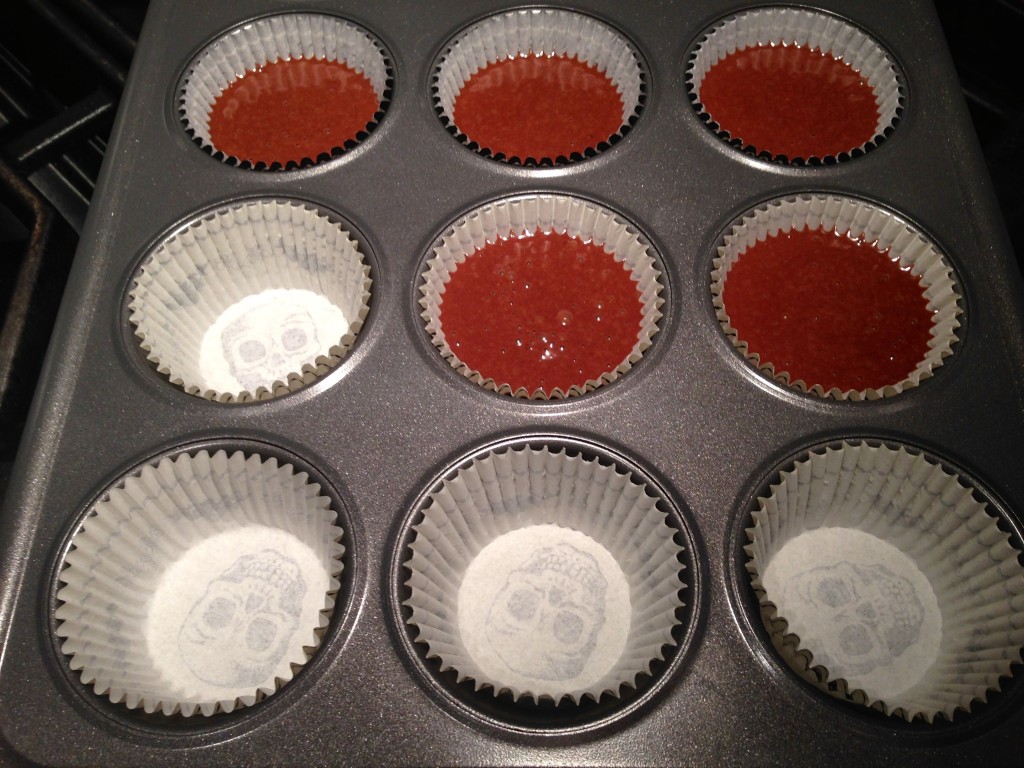 For the cake batter I used this recipe from Oh She Glows. Since family allergies include both dairy and gluten, I used Bob’s gluten free flour. I’m happy to report that the chocolate cupcakes tasted like chocolate cupcakes. Success!

As for the chocolate icing, I just made it up as I went, mixing raw cashews, cacao, coconut sugar, maple syrup, pumpkin milk, vanilla, and a dash of salt. Not a terribly scientific approach on the frosting, I’m afraid. It was totally edible for a dessert last night. And breakfast this morning. And lunch today. However I did detect a little pumpkin in there. I used a raw pumpkin for the milk in this mix, so that may account for a bit more of a veggie flavor. If you normally use dairy in a traditional buttercream frosting and you end up trying an experiment of your own, I’d love to hear how that worked. 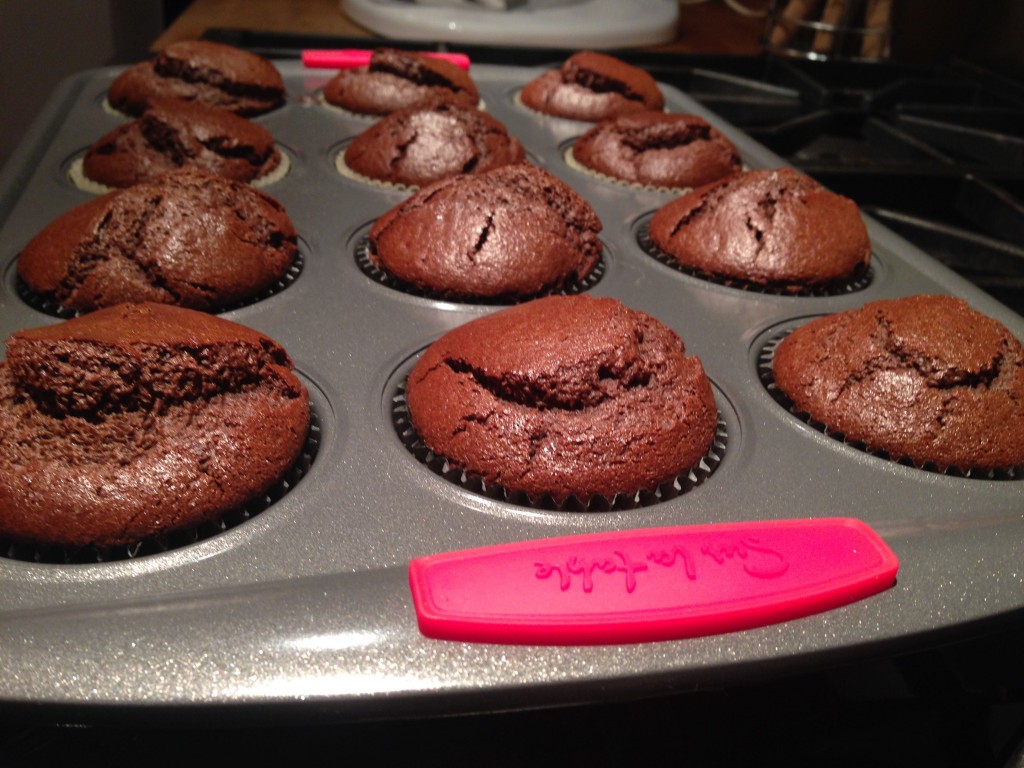 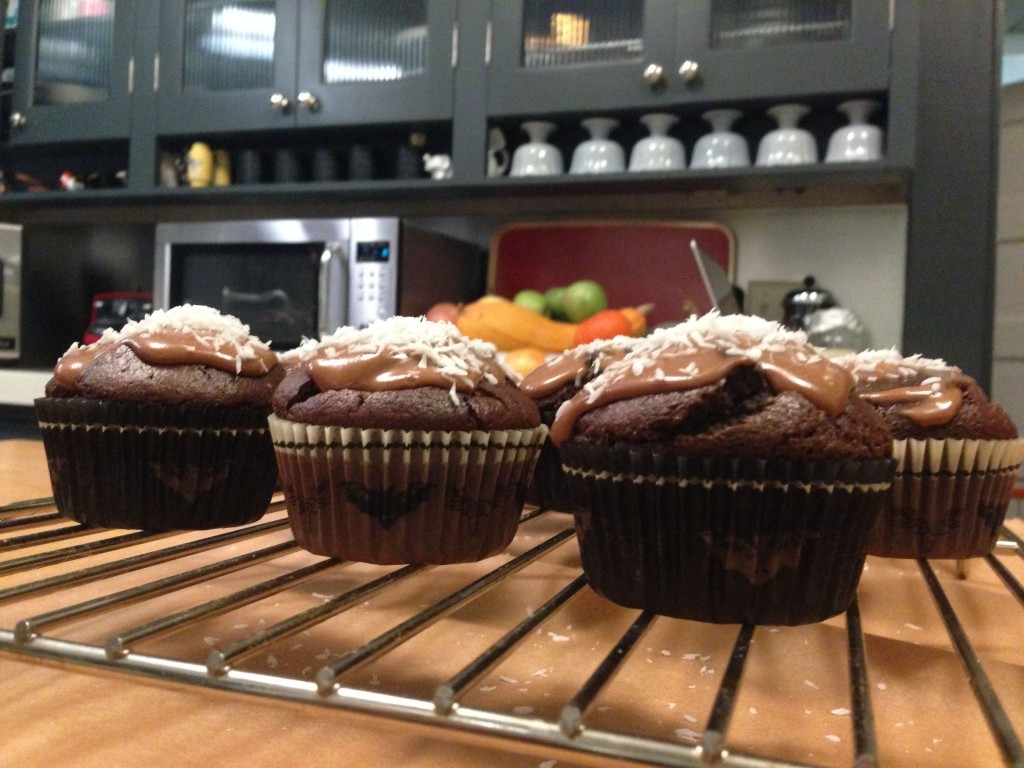 In my first attempt to drink the pumpkin milk on its own, I chickened out and started adding flavors. Pumpkin spice, molasses, rum extract, vanilla, dates. Oh, and I added that carrot you see in the first picture up top. Carrots are nice and mildly sweet, and they don’t taste like veggies when you blend them into a drink. Next thing I knew I had a pretty good pumpkin nog concocted. 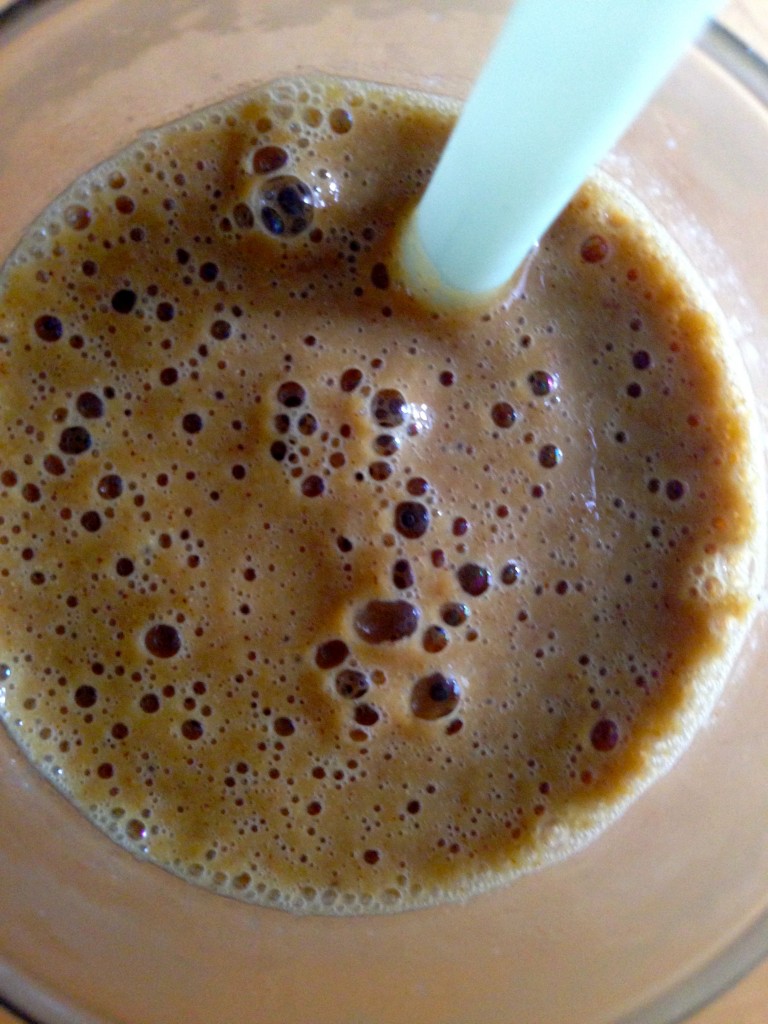 So honestly, I didn’t plan to drink the pumpkin milk straight. We’re of course used to milk being white. This is more like the color of uncooked scrambled eggs. Hungry yet? :/

However, it seemed a shame to let it go to waste, so I gave it a shot over my granola. Milk is usually actually pretty sweet, so I added a dash of cinnamon, splash of vanilla, and a couple drops of stevia to give it a little more flavor. And I have to admit, it was actually very good. Not just because I was too lazy to make coconut milk that day. I had it on my granola again today. 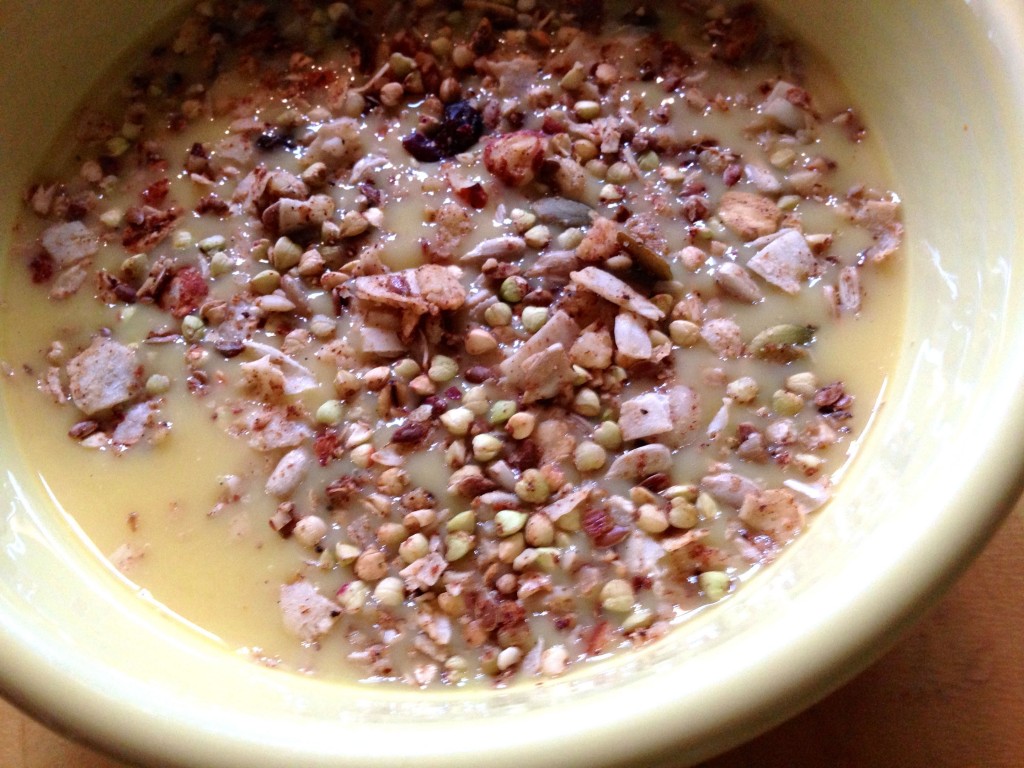 I didn’t take photos of my pumpkin coffee, but I also used it as creamer, which worked great. Overall, this pumpkin milk thing was a pretty big success. Actually, it works great with all squash seeds, I like butternut squash even more, but there’s time for that later. ‘Tis the week to talk of pumpkins.

And of course the pumpkin meat itself went to good use. How gorgeous is it with pomegranates, purple sweet potato, and steamed broccoli? So delicious. 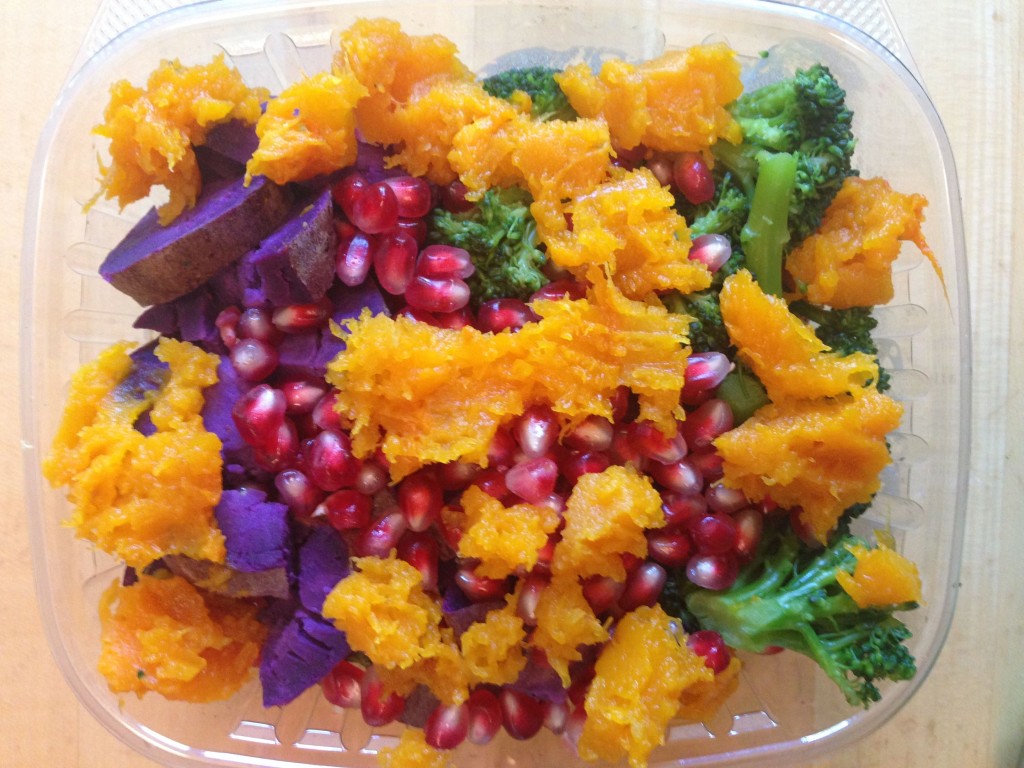 How about you? Have you had your fill of pumpkin yet this year?