No Such Thing as Too Much Zucchini 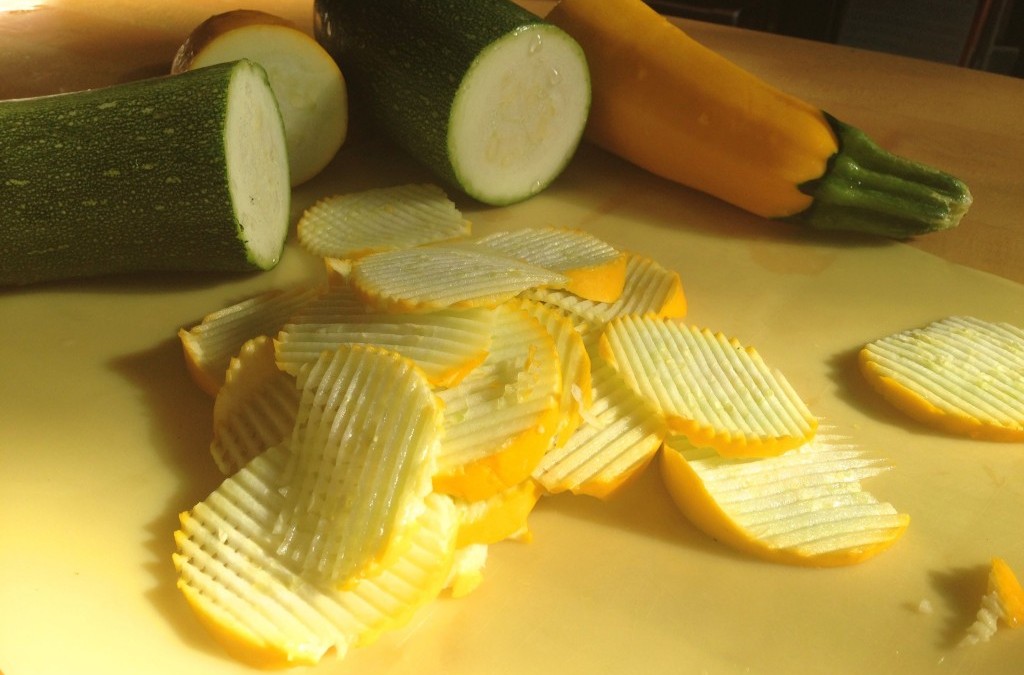 I’m embarrassed. Back when I worked in an office, I used to hide in my cubicle while coworkers distributed their excess garden harvest. There always seemed to be zucchini, which topped my list of duck-and-cover foods. To be fair, I had only ever had zucchini as plain sticks around the veggie party platter, destined for some plastic tub of dip, or sautéed, neither of which are my favorite presentation to this day.

My opinion of zucchini changed on vacation in Italy a couple years ago, where zucchini made a regular appearance on menus, served as paper thin slices grilled with a touch of olive oil, salt and pepper. I initially tried it to be polite, but it was truly delicious, and opened my eyes to new possibilities. You know how once you learn about something new, you see it everywhere?

Now I feel silly for dodging the free extras, and I take them whenever I can get them. There are a million ways to use them.

What I originally disliked about zucchini is now what I love about it. It doesn’t pack much flavor on its own, which makes it so very versatile. It’s good raw, cooked, dehydrated, frozen… so many possibilities.  These are a few of my favorites.. 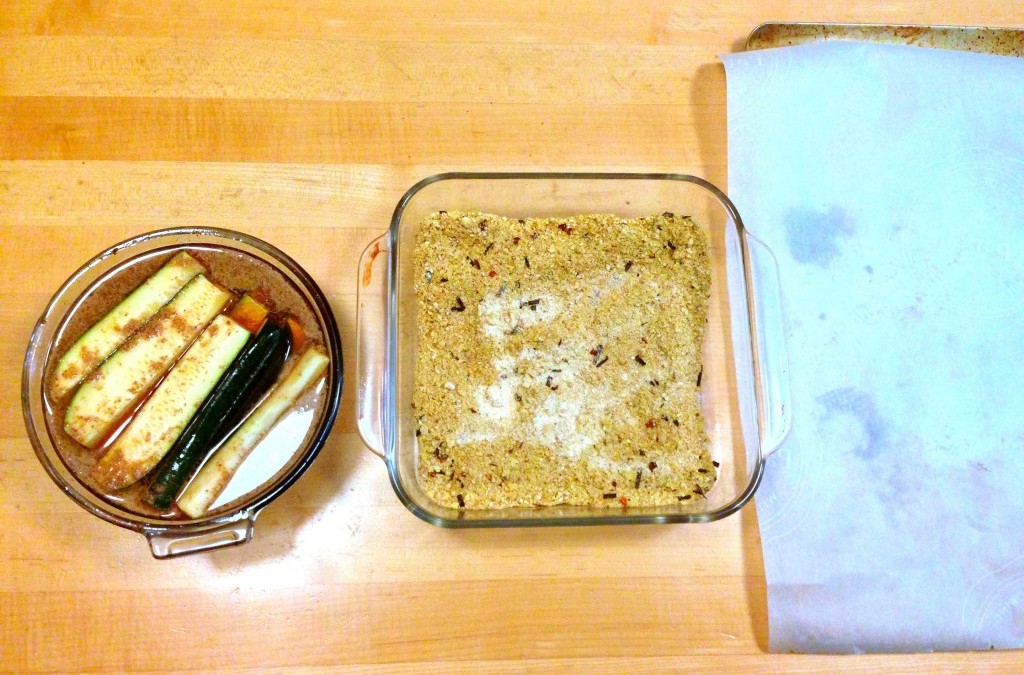 These fries take a little more prep time than but they’re a super healthy stand in for fried potatoes, and a good way to use a large zucchini. 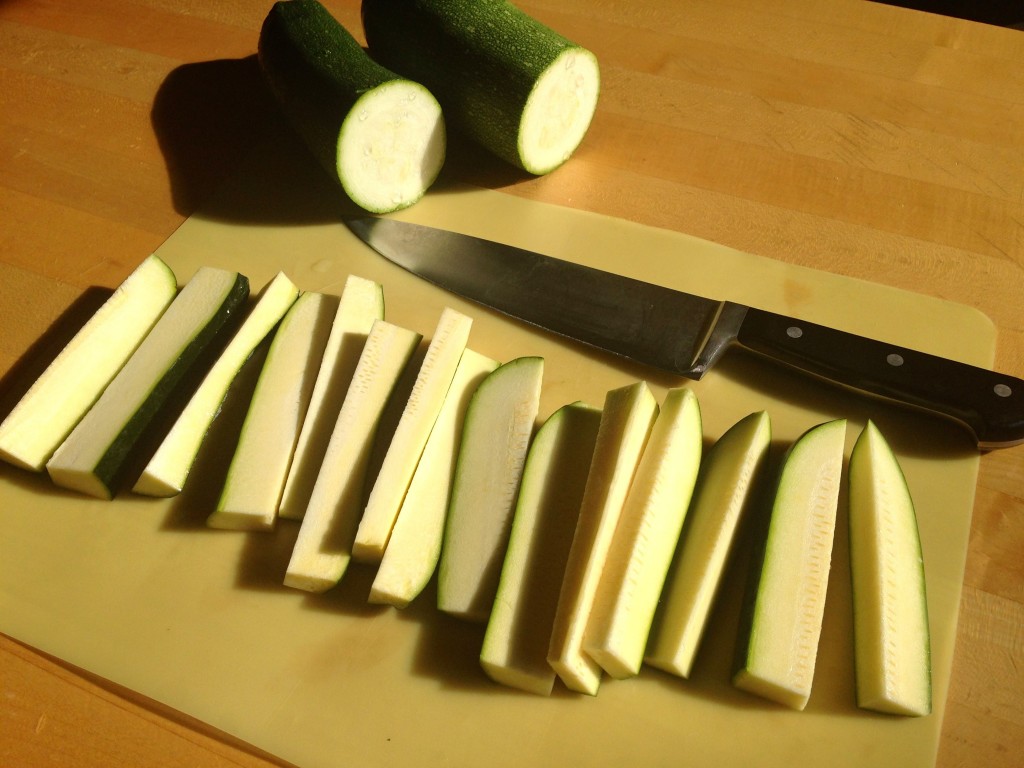 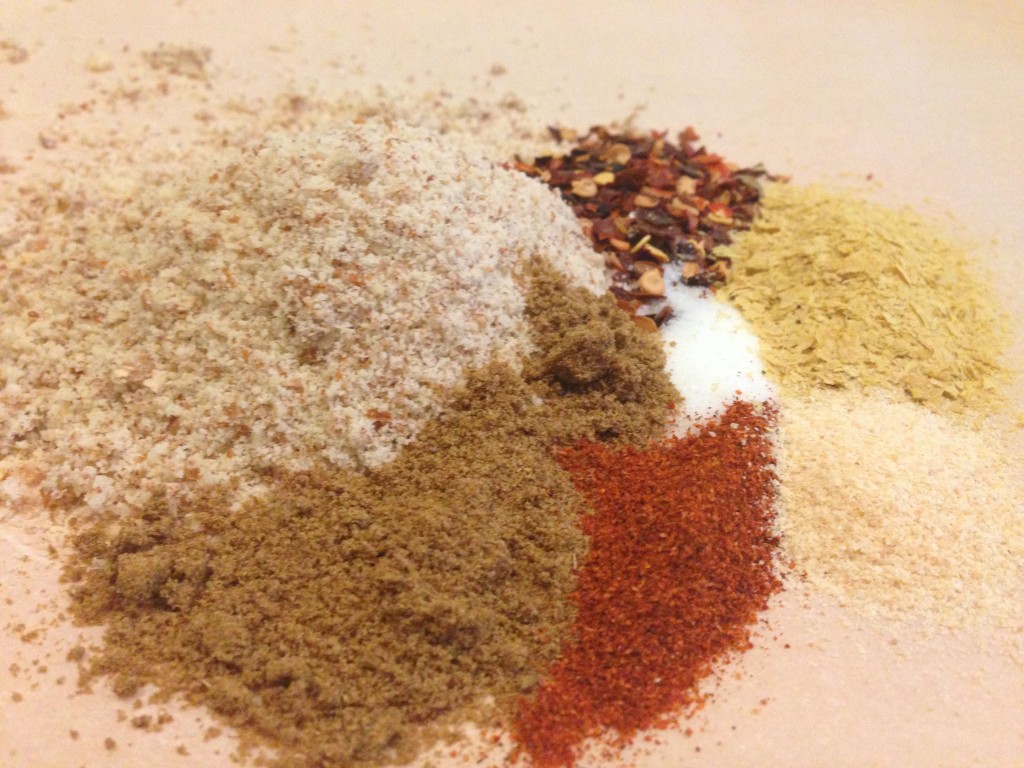 You can play with spices in the  breading. I like  this mix of almond meal, cumin, nutritional yeast, chili flakes, salt, garlic, and a paprika spice mix. I worked from this recipe, but used almond meal in the place of flour, added garlic, Penzey’s Forward spice mix, and threw in a pinch extra on all the spices. 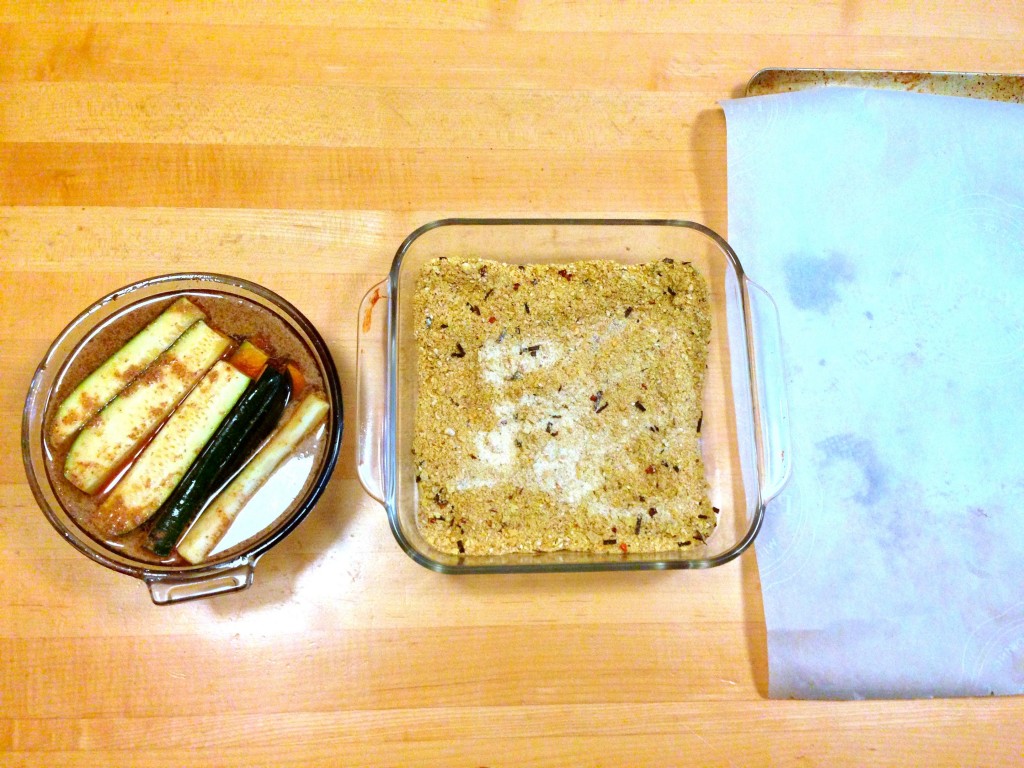 Zucchini sticks, no longer plain, dipped or marinated in a mix of water, lemon juice, soy sauce or something similar depending on your diet or pantry – you could also use gluten free Tamari, coconut aminos, or Nama Shoyu. A couple tablespoons of ground flax seeds help the mix stick, similar to an egg wash, in preparation for dipping. Baked at 375 until hot and golden brown. Extra delicious with fresh dill / cashew dipping sauce. 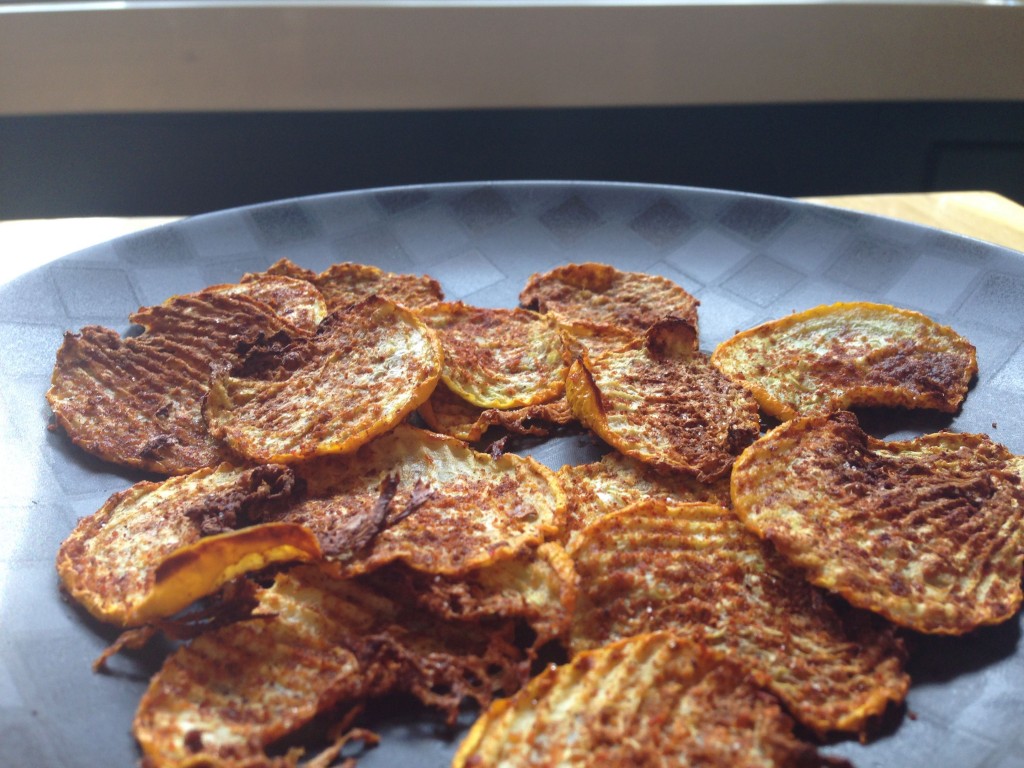 I used yellow squash for cosmetic reasons this time, green tastes just as good. I cut the chips on the most terrifying of my kitchen equipment, the mandoline, which does a beautiful job creating perfectly ruffled chips at the same thickness so they cook evenly. The chips seem to work best more than 1/8 and less than 1/4 inches thick. Too thin and all the water evaporates and the chip vanishes by the time it emerges from the oven. too thick, and they don’t have that crisply crunchy texture. Toss the chips on an oiled parchment paper, they can be sticky little buggers. I use coconut oil. 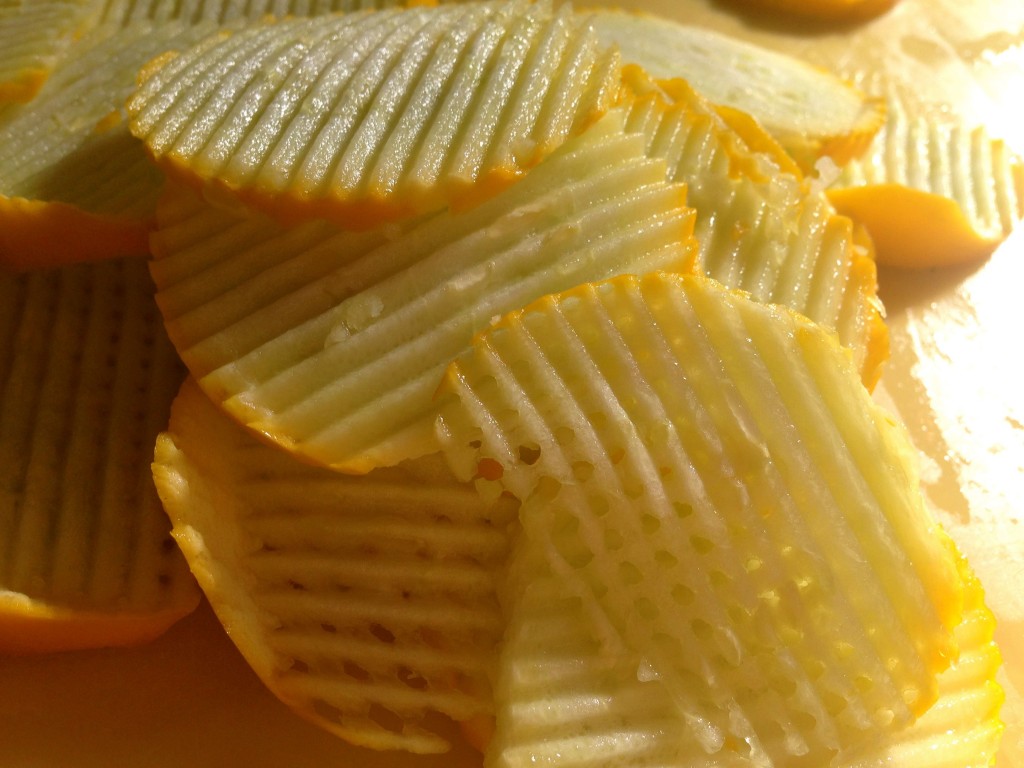 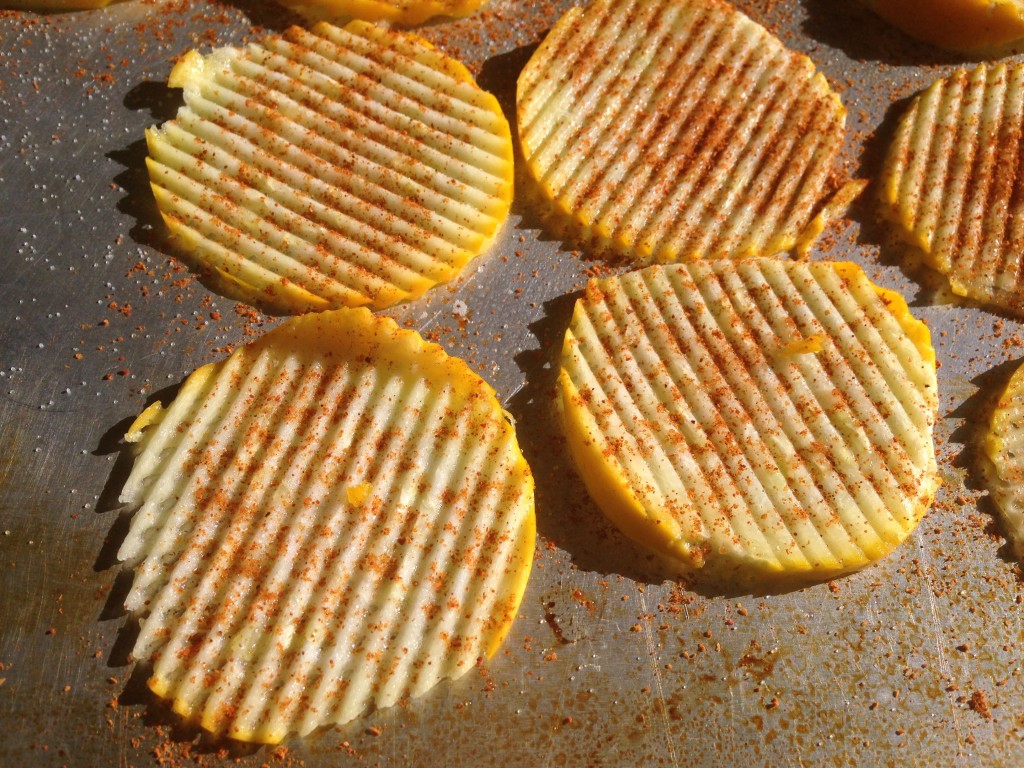 Brush or spritz with oil and sprinkle with barbecue spices and salt. Cook around 225 for about an hour until crispy. Time can vary quite a bit based on chip thickness, so I check them often. 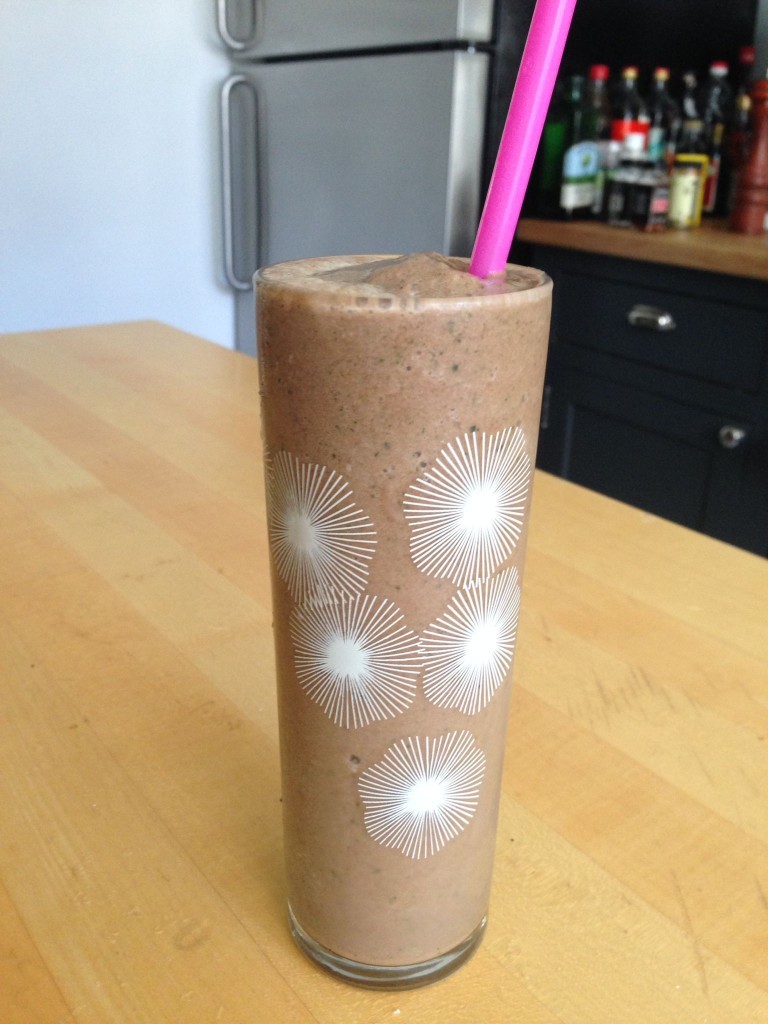 This is my go-to zucchini quick fix. Veggies that taste like dessert. Seriously.

Whenever I have raw fresh zucchini leftovers, I cut them up and toss them in a snack sized freezer bag and throw them in a freezer bin. When the milkshake mood strikes, I toss the frozen bits in the blender with about a half cup of coconut milk, a tablespoon or so of cacao and a sprinkling of sweetener. I like xylitol or stevia if I’m trying to keep it sugar free, but it’s quite delicious with dates and frozen grapes as the sugar. A splash of vanilla extract is a nice touch, or vanilla powder if you want to avoid the alcohol in the extract. It’s quite forgiving with quantities, sometimes I go light on the milk and make ice cream instead. A little peppermint extract and chocolate chips turns it into mint chocolate chip ice cream. It’s surprisingly filling for a light snack. 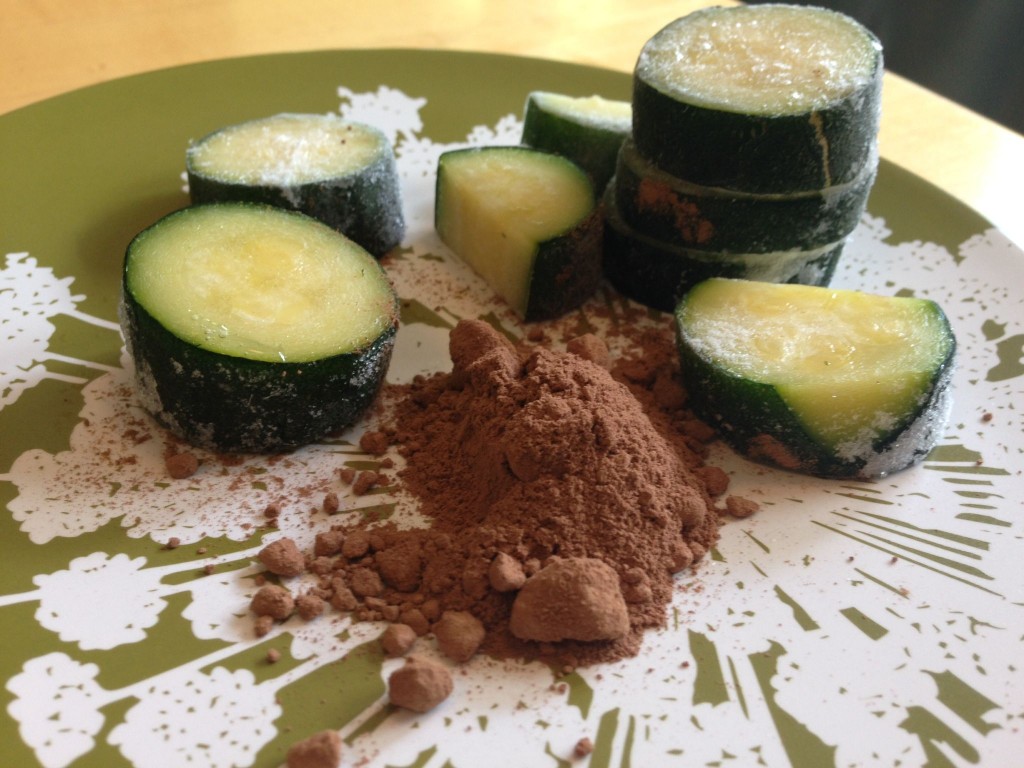 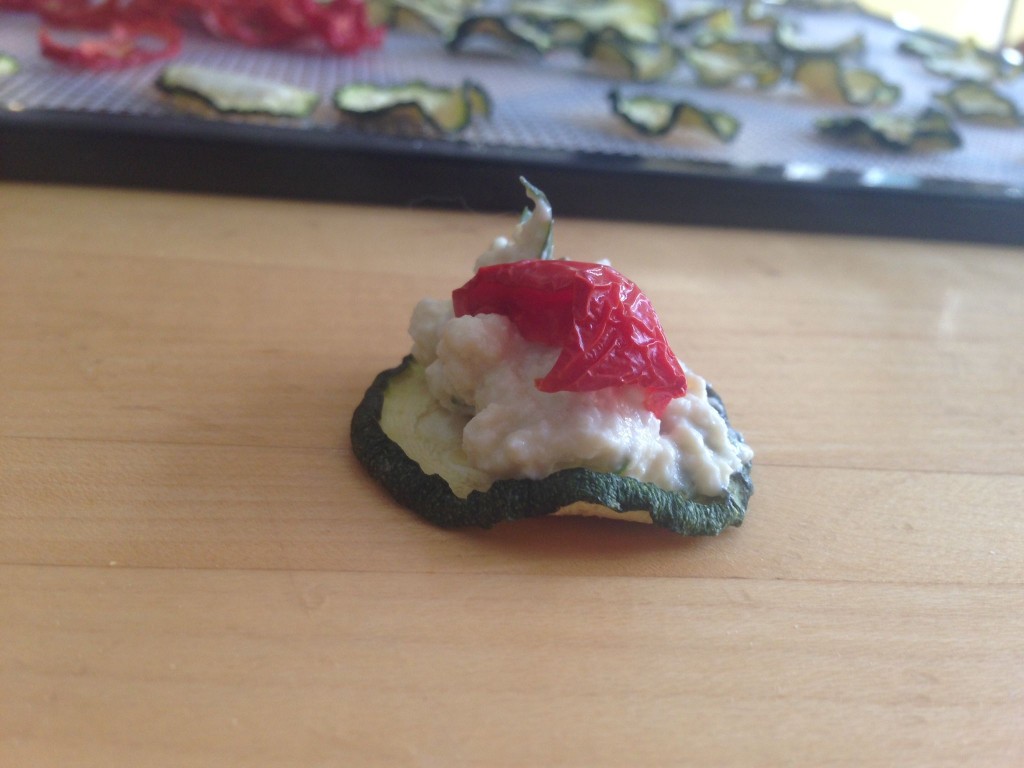 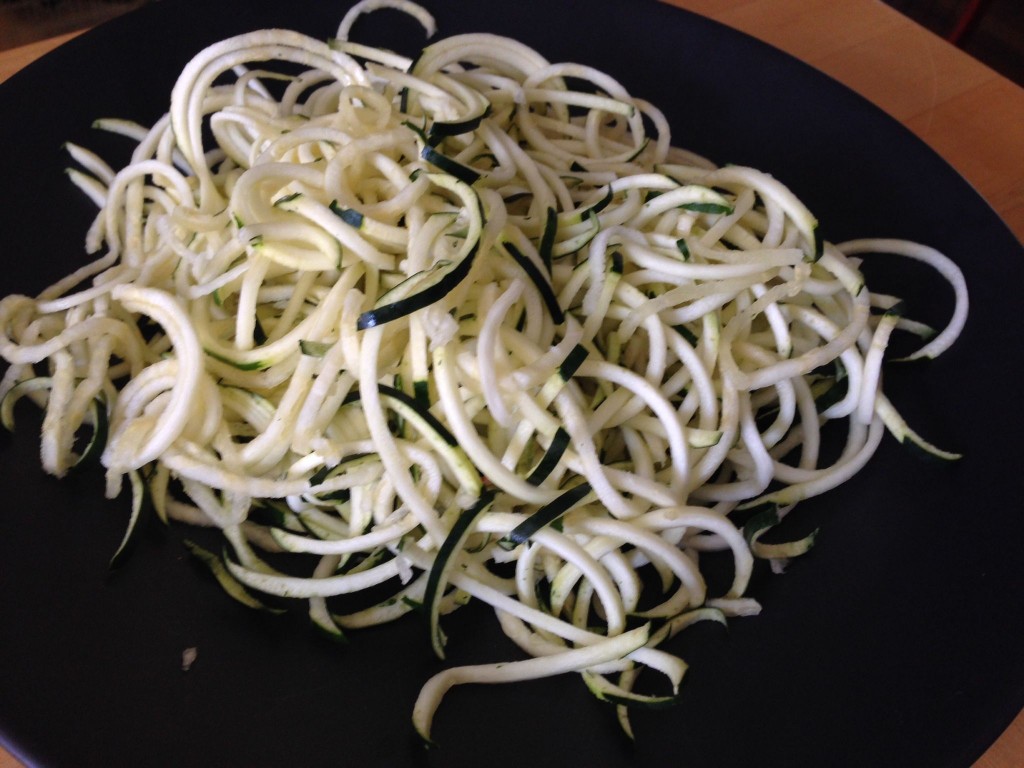 I got a vegetable spiralizer for Christmas last year, and it is the greatest. Zucchini noodles are my favorite base for spaghetti sauce or a very cheese-like roasted butternut alfredo sauce. 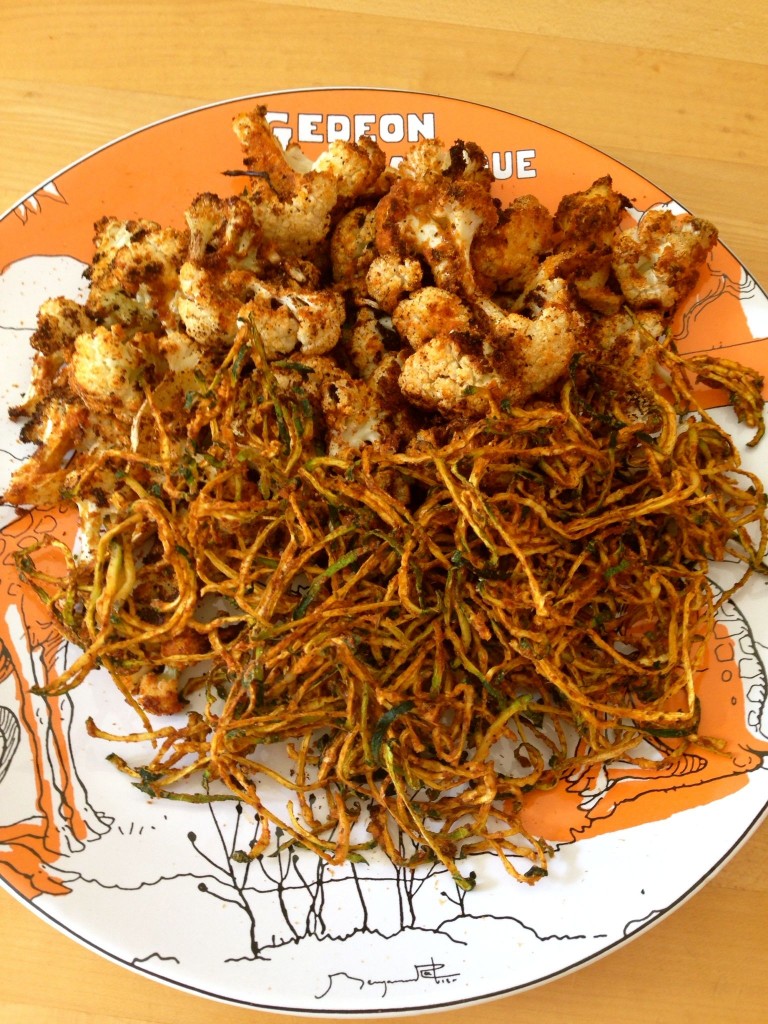 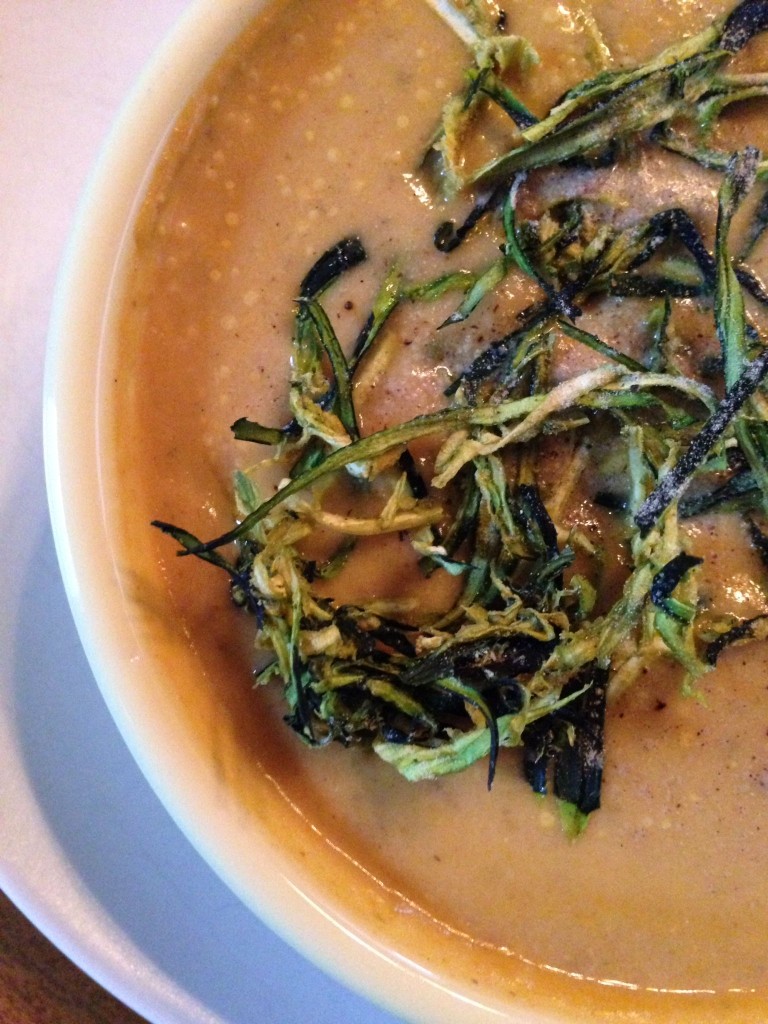 I used to love crackers in soup. So much I probably ate more crackers than actual soup. But now I just make zucchini birds nests and eat as many as I want. I use a julienne peeler to quickly slice up some zucchini shreds, make little piles, sprinkle with some salt and spices, and pop in the oven on parchment paper to crisp them up. So easy. So good. 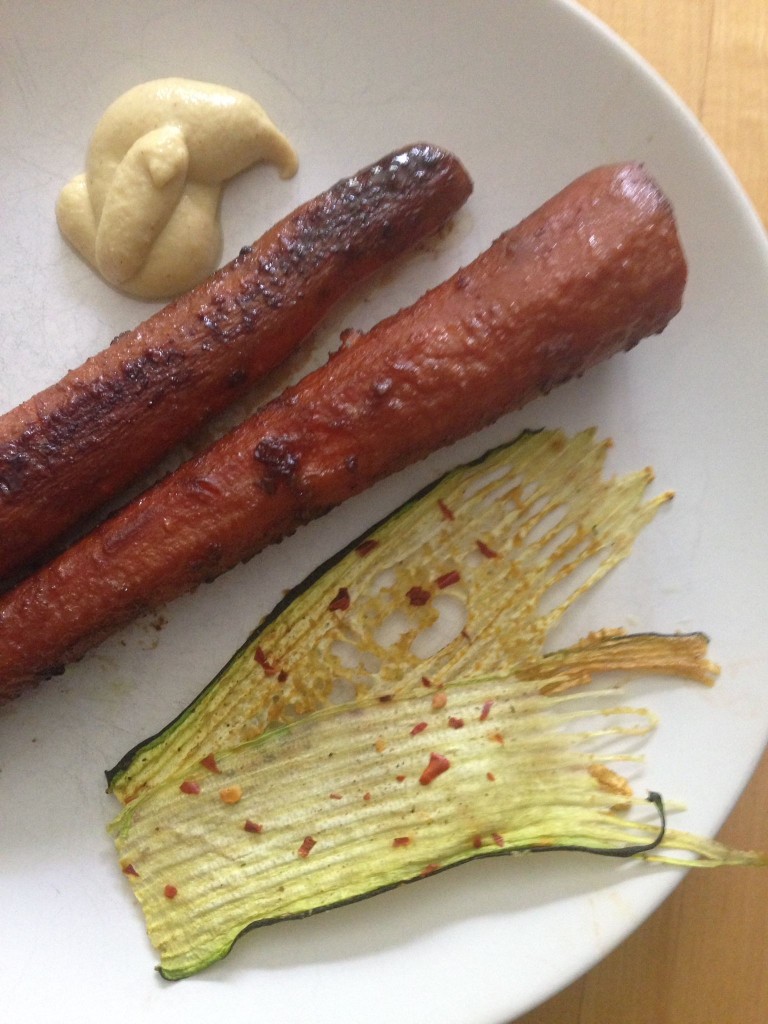 These travel well, and are good for something to chew on. The scary mandoline was in effect again here, zucchini sliced the long way. Slices coated in a little olive oil, tossed with red chili flakes, salt, nutritional yeast, and whatever else sounds good. These can go in a dehydrator until dried out, or in the oven on the lowest temperature. The carrot dogs next to them… we’ll save those for another day. 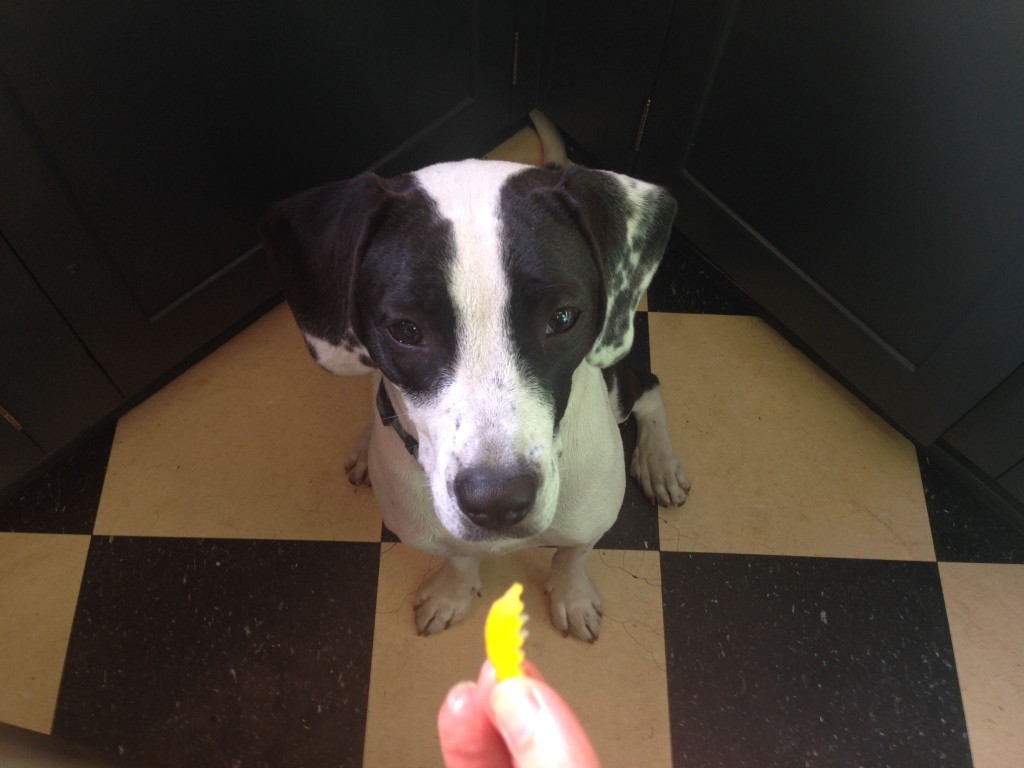 Speaking of dogs, Pokey insists I don’t forget to mention that zucchini is a delicious dog treat. I cannot get the cutting board out without that pup sitting at attention waiting for scraps.

I could go on and on. Never again will I turn down extras from friends’ gardens. I haven’t grown it – yet. Why are there so many leftovers? Do people run out of ideas, or is it so prolific you must share with others? Not that I’m complaining.