new shade bed on the rise 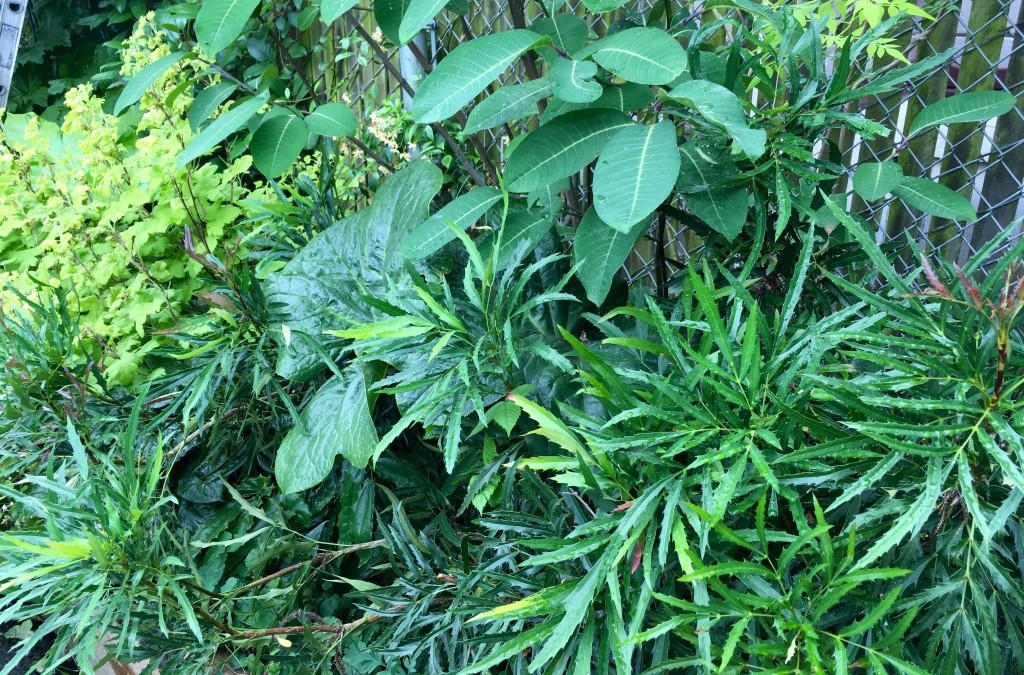 It’s hitting that time of year when my gardening enthusiasm wanes. Is that going on with everyone?

When I feel first hints of fall, my thoughts turn to “holiday season.” I love the lights and parties and activities–though in truth, my notions are far more complex that my execution. Especially since the fall and winter season always go so fast–similar to that scene in Romancing the Stone, wherein Joan Wilder and Jack T. Colton take a wild ride down a mud chute. Kinda like that.

This time of year, if I take a moment to shake delusion and actually go into the garden, my enthusiasm picks up. And now that I’ve recognized the potential for a whole new bed–with morning sun only–I’ve got a few idea percolating. Fall sales are coming on strong, and for once, I can shop knowing exactly where I’m going to plant. That seems a luxury.

I’ve shown most of these pictures before. But this time, they’re in some semblance of relevant order–and I’ve a firm plan in mind. (I’ll let you in on a secret: I write to sort things out. So I hope you’ll bear with me as the light bulb goes on for this bed that I’d been neglecting.)

Amazing how fast those Iris filled the new space. I’ve never grown them before, so I had no idea about their proclivity to spread.

Look, year two and the Iris had taken over all the new bedding space. And I admit, their pretty cool in bloom. But 96% of the time, they don’t really look that great.

It took a while to get clear on what to do with this bed. Uncertainty about a path tripped me up. I knew I wanted one, just not the exact one. And then I found the bargain pavers. Though in retrospect, it did cost a few bucks to implement the bargain pieces. I really must stop adding just the savings columns.

Ah hah. Now I see it. Though I do have a little Crape Myrtle planted with the Persicaria. I realized too late it really doesn’t got enough sun in that space. And I mean to move it. Then I read the other day Crape Myrtles don’t like moving that much. Maybe it’s young enough that it’ll put up with me.

I asked my husband how wide he thought the bed was. Off the top of his head he said, about a foot. Well, it’s actually 42″wide and about 30′ long, so that’s some pretty good space, no? And this bed–which is under the eaves and stays dry-ish even in the rainiest weather–gets a dedicated soaker hose. I swear.

As far as the fancy looking gate, it’s on the list to replace. I just haven’t found the right bargain yet.